Writing in his hagiography of Saint Wilfrid shortly after Wilfrid’s death in 709 AD, Stephen of Ripon noted of the church “My feeble tongue is quite at a loss to describe it – the great depth of the foundations, the crypts of beautifully dressed stones, … ” Stephen was quite right to be so impressed. Those beautifully dressed stones came from the nearby Roman town of Coria, modern day Corbridge. As is the case throughout what was the Roman world, stone used by the Romans for their structures whether dressed or sculptured was re-used in more recent buildings. In fact the practice of re-using exiting materials is widespread throughout history. So much so that there is even a term for this. 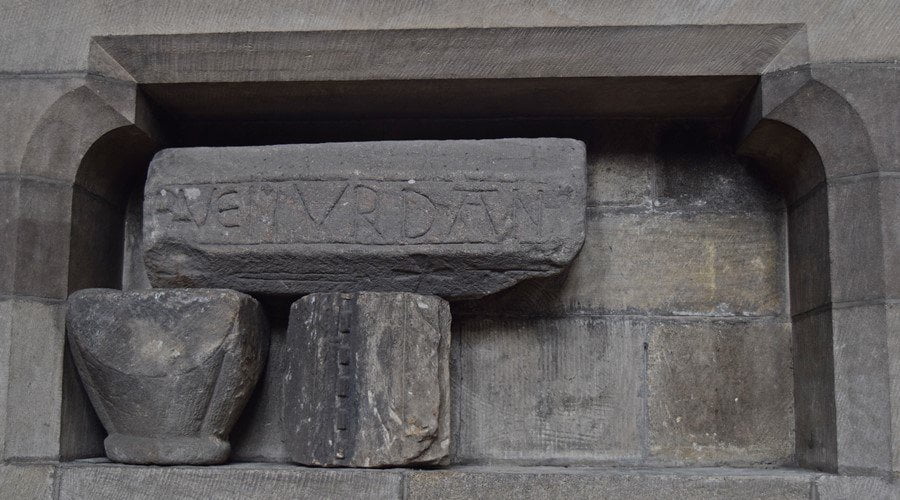 Hadrian’s Wall is a complex structure that stretched from modern day Wallsend on the Tyne River in the east to Bowness-on-Solway in the west, as well as more forts southwards along the coast to Maryport. Building began on ‘the wall’ in the early 120s AD, and Romans occupied the area until the early fifth century. The Wall was a substantial barrier that was made up of a turf and stone wall with a series of ditches on either side, which was protected by gates, turrets and forts located at regular points along the 73 miles. Just south of the Wall were a series of towns that developed greatly at this time. The amount of stone and other building materials used in the construction of these features was immense. The abbey church at Lanercost, built with stone from Hadrian’s Wall.

We have very little to go on about the administration and organisation of the Wall when Roman rule in Britain came to an end. It seems likely that in the absence of control from a regional Roman governor and/or Rome local leaders emerged and assumed positions of power as they did in other areas of the province. Almost certainly they would have used the forts for a period of time. Timber buildings were erected in some of the forts.

Eventually, the Roman structures began to fall into disrepair and the Wall was abandoned. One of a few inscribed stones used in the building of Lanercost Priory.

One of the earliest written accounts of Hadrian’s Wall that was based on personal observation is that of Bede, known as the ‘father of English History’, from around 700 AD. Bede never ventured far from the monasteries of Jarrow and Monkwearmouth his entire life. Ironically, the church at Jarrow was built using stone from the Wall, which was not that far away.

In fact the use of stone from Hadrian’s Wall for churches in the area was not uncommon from the sixth century on. At this time the church was rapidly expanding, with many churches and monasteries being built. Hadrian’s Wall provided a source of stone that was ready-cut and easier to transport to where it was required than to quarry for fresh stone.

Lanercost Priory is one of a number of churches and monasteries in the area that were built using stone from Hadrian’s Wall. The line of the Wall is not that far away. Many of the stones are obviously from the Wall, and there a few that have Latin inscriptions on them. One of these shows the presence of Legio VI Victrix in the area. This is the legion of the Imperial Roman army that was founded by Augustus in 41 AD, and relocated to Britain in 119 AD by Hadrian.

With the dissolution of the monasteries in 1537 Lanercost passed to a Thomas Dacre. The monastic buildings were either greatly re-organised or pulled down making way for a grand house for the Dacre family, re-cycling re-used stone from Hadrian’s Wall.

As interesting as the history of Lanercost Priory is, another location where the re-use of stone from nearby Roman sites adds a fascinating aspect to the site’s story is Hexham Abbey.

According to Simon Jenkins (England’s Thousand Best Churches, 2000) “Few churches in the North of England equal the spectacular interior and monastic relics of Hexham.” The church we see today is not that old, having been rebuilt many times following raids from the Vikings in the 9th century, and the Scots a number of times after that. The church that got Stephen of Ripon tongue-tied was completed in 678 AD. That church was built largely out of stone taken from Coria (modern day Corbridge). And although it was raised to the ground by the Vikings towards the end of the 9th century AD, the way the church has been rebuilt several times since has retained its initial use of Roman material. Just some of the dressed stone in the crypt of Hexham Abbey that so impressed Stephen of Ripon in 709 AD.

The crypt, which can still be visited today, is the original Saxon crypt. And there is no missing the Roman carved stones here (above). Above-ground, the church has been built and modified a number of times, as can clearly be seen in the photograph below with the use of lighter, more finely dressed stone in the 19th century rebuilding on earlier 15th century wall. Spolia from Roman sites used to demarcate different periods of the nave’s wall.

On the nave’s south wall, carved stones from Roman sites was used to demarcate the earlier, darker 15th century wall from the later, lighter rebuilding of the 19th century. Whereas on the opposite north wall of the nave niches were created into which fragments of Roman carved stone have been placed. The 19th century architects have specifically incorporated a distinctive feature of the earlier Saxon church, namely the re-use of Roman dressed stone, into their re-build of Hexham church. Pride of place in the south transept of Hexham church is the spectacular Flavinus tombstone; a nine metre high carved and inscribed Roman tombstone. In 1881 the stone was found face down in the foundations of the east range of the cloister. From what we know of the abbey’s architectural history, it must have been placed there sometime in the 12th century by the Augustinian monks. Where it was before that is not known. But given the nearest Roman cemetery was in Corbridge, it is widely accepted that the tombstone was initially erected there.

A triumphant Flavinus on horseback rides over a cowering Briton.

The imagery on the tombstone is quite detailed, and together with the inscription we know that Flavinus was a 25 year old standard bearer for the Petrian Cavalry Regiment from Gaul (France), which was based at Corbridge. Here Flavinus is depicted on horseback riding over and seemingly kicking a naked, cowering Briton who holds a short-sword. Was Flavinus’s tombstone just a suitably shaped stone for the builders of the church in Hexham?

Not surprisingly, there is a term for this re-use of older architectural features in newer buildings. And, until not that long ago the practice was not given much attention other than simply noting its existence. More recently, however, archaeologists, art historians and architectural historians have suggested with a number of interesting and compelling case studies that there was more to the practice than a mindless recycling of building materials.

One book made up of 12 essays published in 2011 is currently receiving favourable reviews and a lot of praise. Reuse Value. Spolia and Appropriation in Art and Architecture from Constantine to Sherrie Levine is available on Amazon.com and Amazon.co.uk. For a more specific study spoliation in the UK, read Plundering the Past: Roman Stonework in Medieval Britain by Tim Eaton and published in 2000 (buy a copy at Amazon.com or Amazon.co.uk)

The generic term used for the repurposing of bits of older structures is spoila. The term comes from the Latin word spolium used for an animal skin or hide that has been stripped off the body. Spolium then also came to be used for the arms and armour that was stripped from a defeated enemy, from where the term ‘spoils of war’ comes from. Spolia is the plural of spolium in Latin. And it is from these meanings that the legal term ‘spoliation’ is derived> according to Duhaime’s Law Dictionary, “Spoliation refers to the destruction or material alteration of evidence or to the failure to preserve property for another’s use as evidence in pending or reasonably foreseeable litigation.” A figure in a toga that was once part of a tombstone or a decorative frieze, now in the Hexham Abbey Museum.

The deliberate and purposeful re-use of Roman stone in the 19th century re-building of Hexham church is an explicit reference to the earlier history of the church. A recognition of the use of Roman stone by the Saxon builders. Sadly as the Saxon church was destroyed by the Vikings, what was above ground and immediately visible anyway. So it is now difficult to know exactly where the Saxon builders used Roman carved stone. Were the carved stones and decorative elements hidden, or visible in the Saxon church?

Or were they just happy to find some ready dressed stone for which to build Hexham Abbey? Tim Eaton, author of Plundering the Past: Roman Stonework in Medieval Britain (2000) thinks not. Based on a study of over 200 Medieval buildings, Eaton argues that builders were not simply adopting the cheapest, physically expedient option. Rather the church in England deliberately used Roman masonry to convince the English they were the rightful successors to the Roman Empire.