The SS Great Britain – a legendary maritime vessel designed by the acclaimed Victorian engineer Isambard Kingdom Brunel. First launched in 1843 from Bristol’s floating harbour, she was a giant – the largest in the world. Powered by steam and built with an iron hull, it was the first screw-propelled luxury ocean liner, to carry passengers across the Atlantic. Eventually left to rust in the Falkland Islands, the ship was famously re-floated and transported back to Britain in 1970. ‘The Grand Old Lady’ was finally home. She had fallen in to extreme disrepair after years of exposure to the raw elements, and so underwent a painstaking but successful conservation project.

Today, Brunel’s SS Great Britain stands proudly at Bristol’s dry docks. The enormous hull is suspended within a glass waterline plate – part of a dehumidifier system which protects it from further corrosion. What’s more, the restored ship and Dockyard Museum are now a top tourist attraction – with a new section due to open in 2018 called ‘Being Brunel’. On reading about the SS Great Britain and it being described as the “fore-runner of all modern shipping”, I was intrigued. Enlisting the help of my trusty ‘Ship’s First Lady’, I travelled to historic Bristol to board this famous celebrity vessel. This is my story… 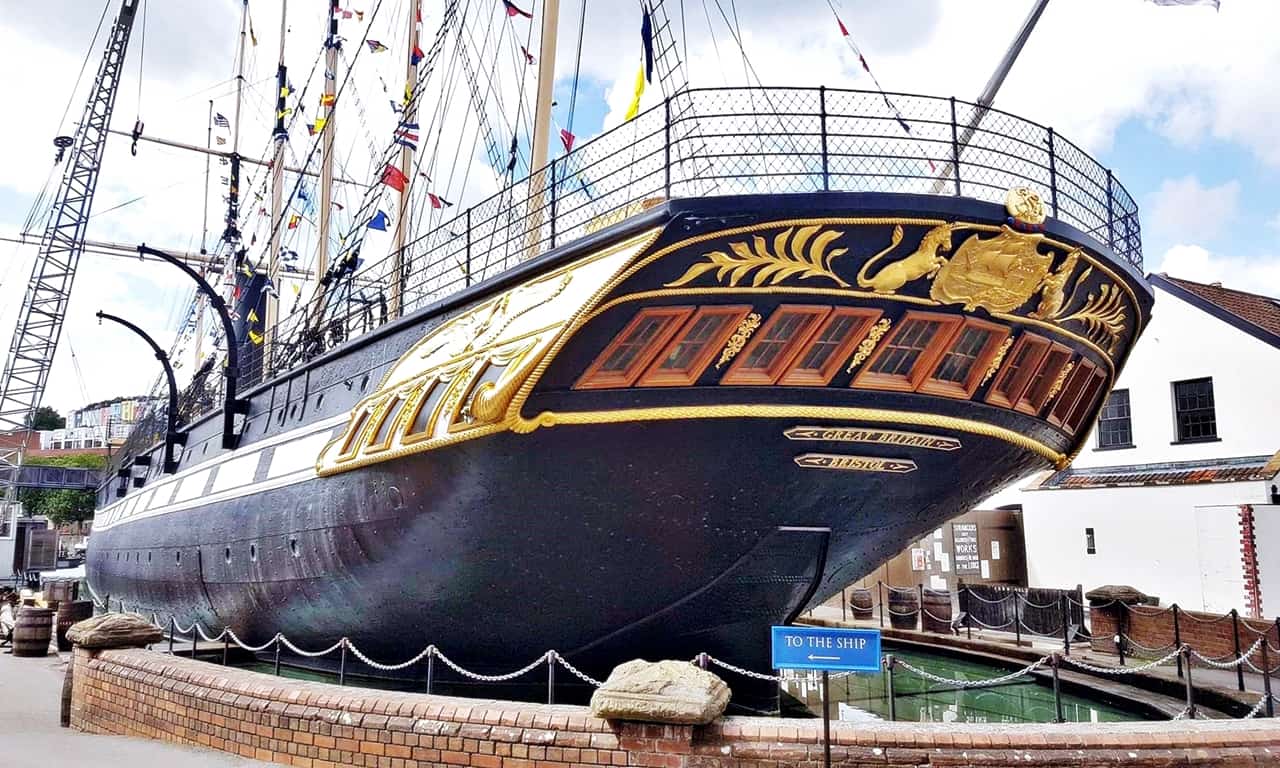 A view of the SS Great Britain from Bristol's dry docks. Decorated with an array of brightly coloured flags, the impressive steamboat appears almost exactly as she would have done on launch day on the 19th July 1843.

What does the SS stand for? Steam Ship.

Where is the SS Great Britain docked? In the dry docks of Bristol.

Why is the SS Great Britain Famous? Because it was the first steam ship to combine an entirely iron hull with a screw propeller.

Can you go inside the SS Great Britain? Yes.

Can you climb the rigging on SS Great Britain? Yes, with a Go Aloft! ticket for £10.

Are there restaurant facilities at the SS Great Britain? Yes, a good selection at the Dockyard Café Bar.

Is there a gift shop? Yes there is, and it’s full of treasures.

Now I love Bristol. For me, as a city it has everything. Museums, culture, festivals, nightlife – and a world-famous whopping great ship which appears to be floating (but isn’t really). The man responsible for the ship’s existence, a certain Mr Isambard Kingdom Brunel, who also happened to design the Clifton Suspension Bridge (and who had previously been the chief engineer behind the Great Western Railway). What I have realised is that Bristol has a lot to thank Brunel for – as does Britain (and the world for that matter). And so it became clear to me that when visiting the SS Great Britain, you learn just as much about the man who designed the ship, as you do about the ship itself. Which made a lot of sense as I began to discover the innovation behind the design.

The layout of the ship allows visitors to experience the vessel from various different perspectives: The hull from below the waterline, and the four decks –including the upper deck. There is also the Dockyard Museum with its collection of displays, artefacts and passenger memorabilia. I enjoyed the fact I could roam freely – the feeling of being able to explore at one’s leisure, is a reoccurring theme at the SS Great Britain. It is not the kind of tourist attraction where you feel herded around like a flock of sheep (I’m relieved to say). This is helped greatly by the fact that there are so many ‘nooks and crannies’ to discover and explore, and multiple ways to switch between decks. I found this sense of fluidity exciting!

The Dockyard Museum – History at Your Fingertips…

The museum is housed in wooden dock-yard-style building and was the perfect way to start my voyage. It tells the remarkable story of the ship’s journey back to Bristol (this blew my mind). It turned out that fire-damage was what forced the SS Great Britain to be sold off in the Falklands in 1886 – where she remained afloat as a bulk storage unit until the 1930s. Then, a ‘stroke of genius meets completely bonkers’ idea came to life with her epic return in April of 1970; the ship was successfully transported the 8000 miles back to Bristol on a floating pontoon! After marvelling at original video footage of this momentous event for some time – I was eventually towed away myself.

Next up, I was entering a series of time zones from the ship’s past – from luxury passenger vessel, to the 32 voyages carrying British emigrants to Australia, and then its final years as a cargo ship. Even as a stationery vessel, the SS Great Britain played a vital role during the First World War: In 1914, her huge storage capability was utilised to re-coal the Royal Navy’s South Atlantic Fleet at the Battle of the Falkland Islands. Before long, I had transformed into ‘kid in a sweet shop mode’, with so many interesting objects to see, and stories to read about. Yet there was a refreshing interactive-feel about this place, with plenty for adults and children to enjoy. Macho-Dads can try lifting the huge propeller, while little sailors in the making can search the colour-coded zones to complete the stamps on their stamp sheet.

A collection of fine silverware gifted to Brunel in 1845 by the Great Western Rail Company on display at the Dockyard Museum.

I was intrigued to sift through the letters of former passengers and observers, and look upon old photographs and paintings. I also had the opportunity to dress up in Victorian-style clothes (which I ashamedly enjoyed a little too much for a man of 32).

Other artefacts included the ship’s bell from the SS Great Eastern, shiny silverware, and pieces from the original wreck of the vessel that I was soon to board. There was also an abundance of information about the painstaking conservation project to save the SS Great Britain from increasing corrosion (cue huge glass plate), and how Brunel’s masterpiece was restored from a weathered wreck to her former luxurious glory. And so… with our expanded brains bulging with all things maritime, it was time for the ‘First Lady’ and myself to explore the ship from bottom to top. First stop, the hull.

The Hull – An Iron Giant 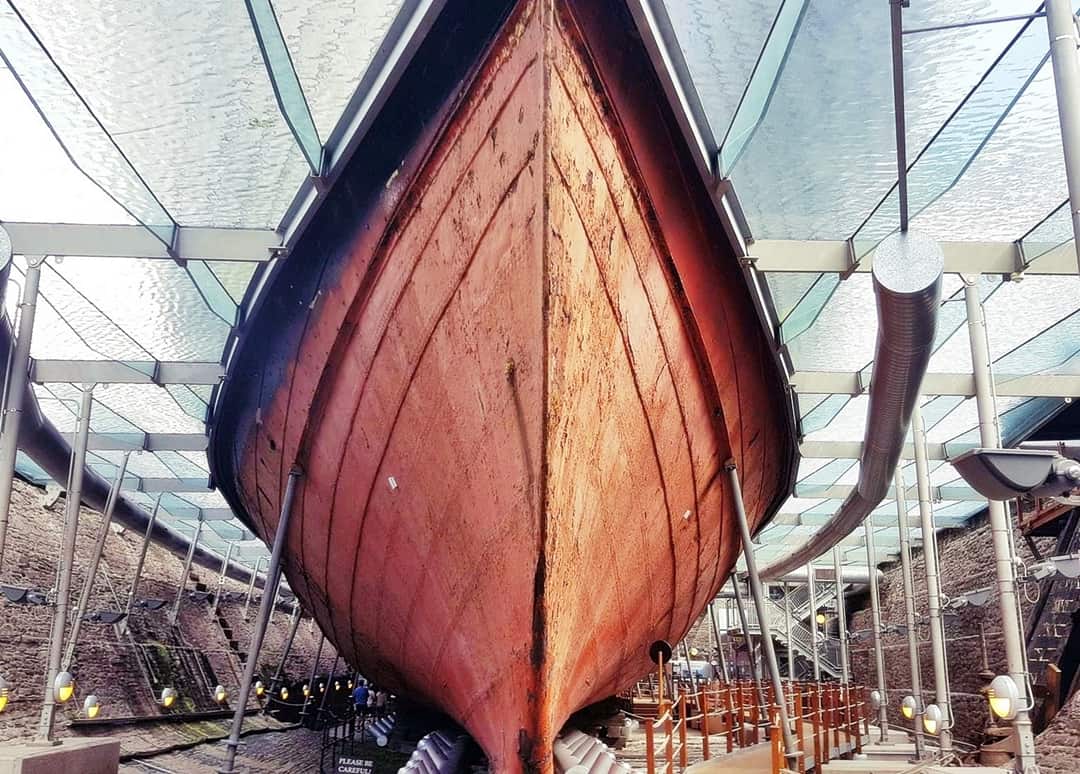 A view of the enormous hull from the bow end. The SS Great Britain is now suspended in a glass plate in Bristol’s dry docks.

It was only after descending down the steps that I realised the sheer magnitude of the ship’s hull. In 1883 it was the first to be constructed entirely of steel, and it was the longest in the world (98 metres to be precise). Now I can’t begin to imagine just how intimidating this would have been to someone seeing it in the 19th century, because even to me, this thing was gigantic. It was also as if I had suddenly gained the ability to breathe underwater, as being below the glass plate gave the impression the ship was afloat. And as if Brunel hadn’t shown off enough – his innovative flare continued to impress me: The giant (not-so-subtle) bright orange six-bladed propeller and rudder, which can be found at the ship’s stern, make a bold statement. It is a replica of the original design (though a four-bladed version was adopted in practice). A large Steamboat would previously have been driven by a large paddle wheel. However, Brunel’s idea to combine the screw propeller with an iron hull on the SS Great Britain revolutionised maritime travel, making large ocean vessels much more streamline and fuel efficient. 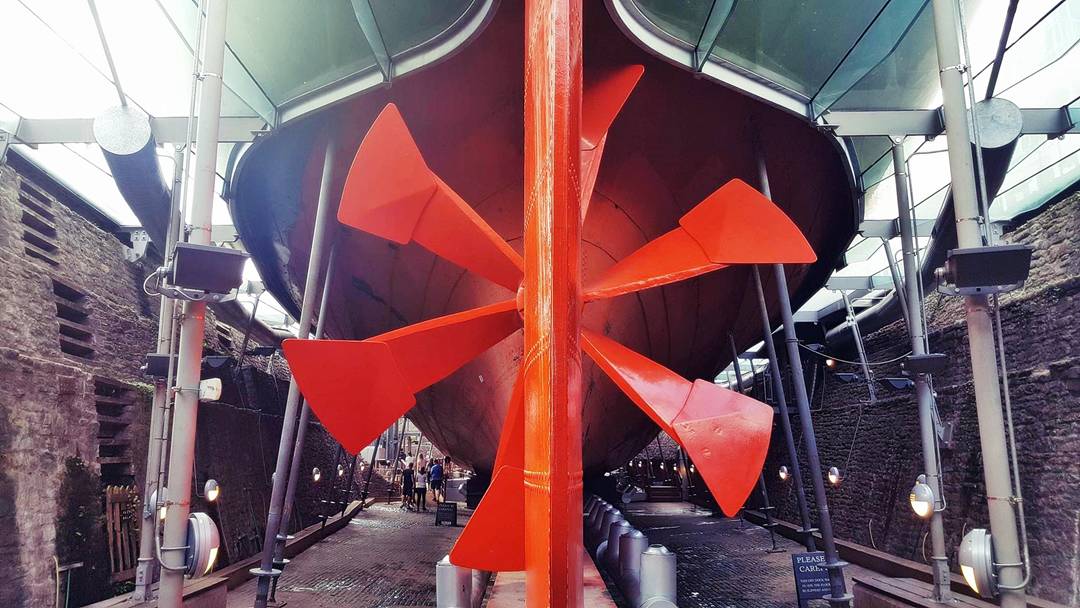 An exact scale replica of Brunel’s original six -blade propeller and iron rudder at the stern end of the ship.

The Decks – A Touch of Class?

Now expert engineers, it was time to explore the decks. The SS Great Britain carried first, second and third-class passengers. Though I think it’s safe to say that sleeping arrangements have changed a little since Victorian times. Wandering around the promenade deck and seeing the private cabins and communal sleeping in steerage (third-class) as they would have been was a fascinating experience. In fact, exploring the ship transported me back in time. I felt a part of it – the sights and sounds, even the smells of life on board made the experience seem real. There is the galley, stores and the bakery to see; the forward hold, engine room, and luxurious dining saloon to discover. I was surprised to see the cogs of the engine in motion – the industrial whirring and rotating, offering an insight into the technological advances of the 19th century. Roaming Brunel’s ship there seemed to be a surprise around every corner! 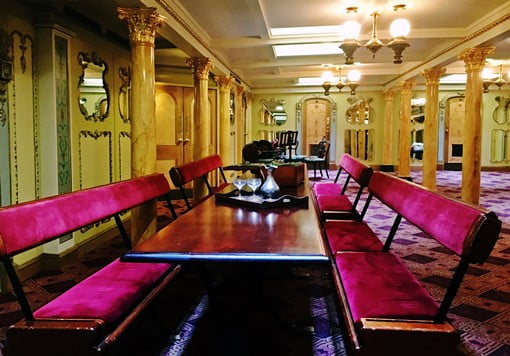 The saloon is where the SS Great Britain’s Victorian passengers would have enjoyed fine dining during their voyages. 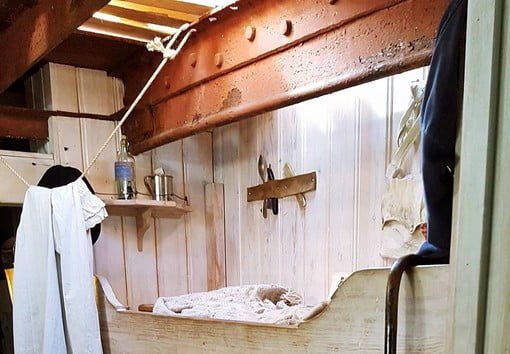 ‘Steerage’ was the communal sleeping quarters where the majority of emigrants would have slept on the 60 day journey from Liverpool to Melbourne. Over 600 passengers made this trip between 1852 and 1875.

Access to the weather deck was possible from a number of different routes and added to the sense of adventure. We were welcomed with views of Bristol Harbourside and once again felt the scale of the vessel. I very much enjoyed mischievously stepping across a white line with writing that read “First class passengers only beyond this line” (I will never cease to be a rebellious child). Above deck there was all-things-ship to look at: the looming mast, the steering wheel at the bow-end, portholes, sails and vast amounts of rigging – which can be bravely climbed by the thrill-seeker type.

Now there is an extra charge to experience ‘Go Aloft’ at the SS Great Britain (£10 price in August 2017), but don’t let that put you off. The friendly team are trained professionals, and all the safety equipment and guidance is supplied. I watched children (much braver than me) climb over 25 metres up the rigging and edge nine metres from the main yard and over the dockyard! Supported by the National Lottery and other charities, ‘Go Aloft’ seems to offer a unique and exciting opportunity to climb the very same route as the Victorian sailors would have done – adrenalin rush and all. 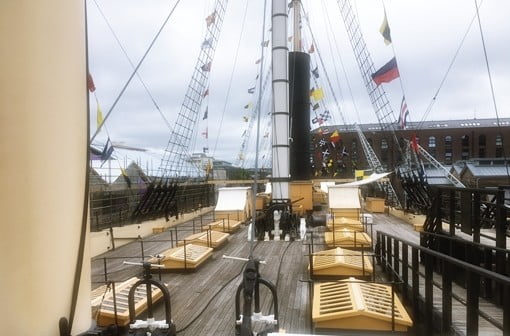 A view along the bow-end of the weather deck with its mast,
rigging and ropes. 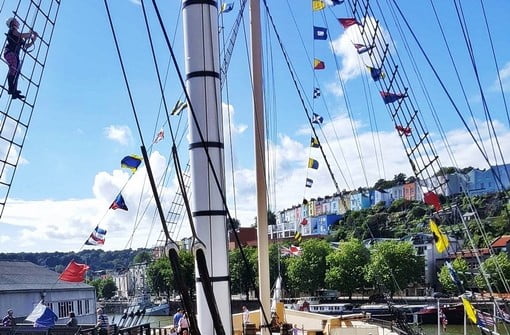 Climbing the rigging. The ‘Go Aloft’ experience offers the chance to see the SS Great Britain from the perspective of a Victorian sailor.

Watching both kids and adults with such courage somehow wore me out – and so we decided to head back through the lower decks. A quick chat with Mr Brunel who was suited in full 19th century apparel, and with our sea-legs well and truly earned, our voyage was over. I feel like I could happily visit this impressive old-timer again, and thanks to the fact that our tickets are valid for an entire year from the date of purchase – we will. I’m certainly already looking forward to coming back in 2018 and checking out the new ‘Being Brunel’ exhibition. The SS Great Britain had left me knowing a great deal about Bristol, Brunel and the history of a magnificent ocean vessel and her passengers. However I describe her – an ‘engineering masterpiece’, a ‘sea-fairing giant’, a historic ‘home-comer’, or even a ‘war hero’… this is a ship that changed the world. 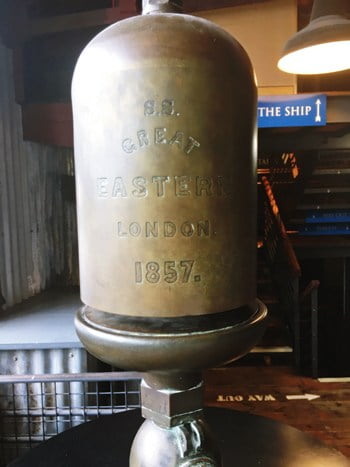 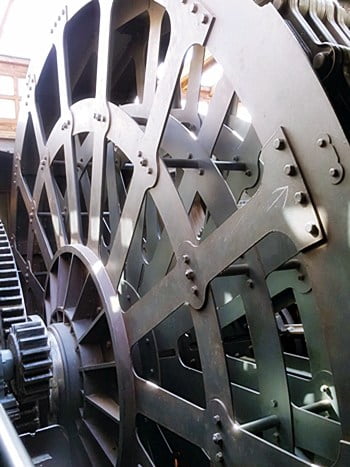