Headquarters of the Hanseatic League in England, and once the largest Medieval trading post in Britain. 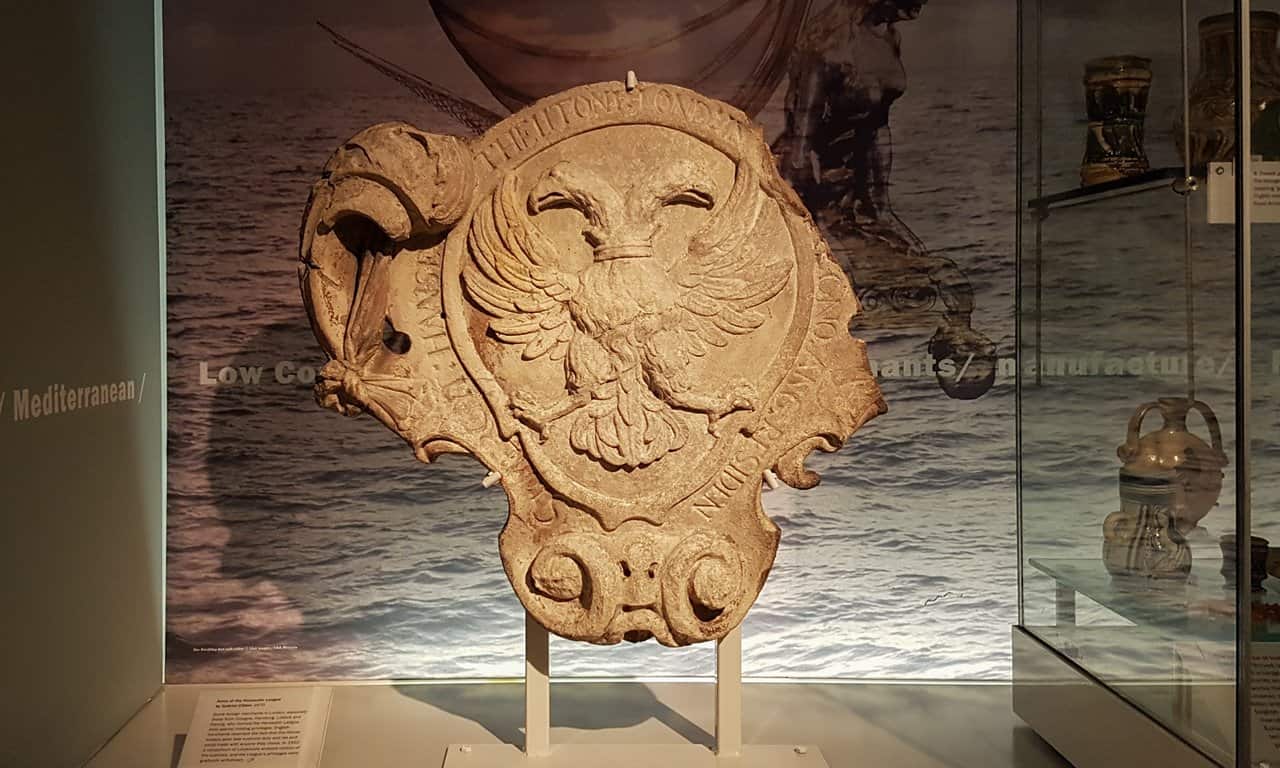 Arms of the Hanseatic League carved by Gabriel Cibber in 1670, Museum of London.

Steelyard, the headquarters of the Hanseatic League in England, was located on the north banks of the Thames River in London. From contemporary accounts and maps, such as Johann Gustav Droysen’s 1667 Atlas, we know that this was a walled community, complete with its own warehouses that had direct access to the Thames River, a weighing house and counting houses, as well as residential buildings and a chapel.

The cities of Lübeck, Bremen and Hamburg sold their commonly held property in London to the South Eastern Railway in 1852. In 1866 Cannon Street station was opened, built on the site of Steelyard. During maintenance work on the station in 1988, archaeologists found the remains of a trading house. Otherwise, nothing remains of the trading post today. For a fascinating article with some interesting historical drawings and photographs of Steelyard and the Canon Street station, see A London Inheritance.
[mappress mapid="500" width="100%"] 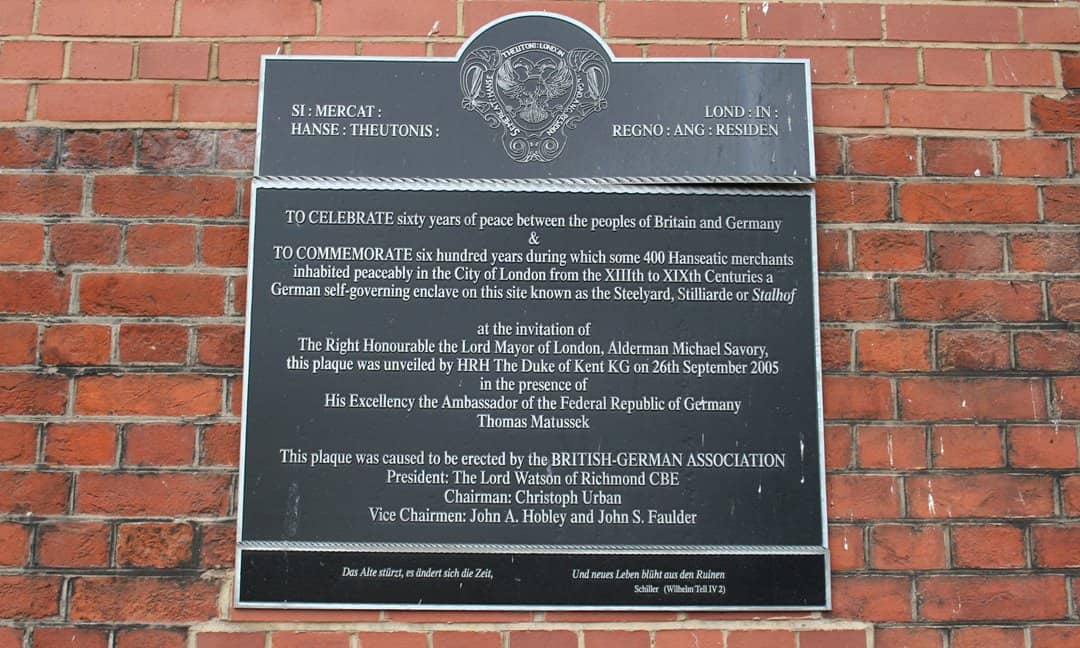 Plaque on the riverside footpath on the eastern side of Cannon Street station commemorating Steelyard. Photograph © Ian Mansfield/Wikimedia

Hanseatic Artefacts in the Museum of London

Although there is nothing but a commemorative plaque to see at the site of Steelyard, some of the artefacts recovered from archaeological excavations of the trading post are on display in the nearby Museum of London.

The Museum of London has an exceptional series of permanent exhibitions on the history of London, from earliest times to the recent and contemporary past. Trade and commerce are obvious themes that are included in these displays. London’s prosperity was largely dependant on trade with foreign lands. English wool and cloth were exchanged here for goods from all over the world.

In one case that specifically focuses on maritime trade between London and the rest of Europe, a number of artefacts from various parts of Europe can be seen – amber from the Baltic to distinctive pottery from the Iberian peninsular. 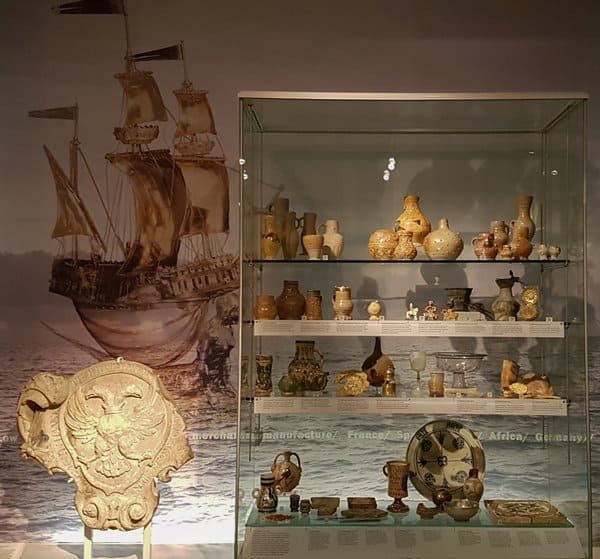 Hanseatic traders had control over the trading of stoneware from the Rhine region of Germany. As a direct consequence of the Hansa trading post at Steelyard, London was the principle port of entry into England of German stoneware by the end of the 16th century. And a magnificent collection of these vessels is on display in the museum.

One piece of stoneware recovered during excavation at the Steelyard site stands out. The vessel is known as a Siegburg drinking jug dates to somewhere between 1550 and 1585, and was probably used for wine from the Rhineland. What is particularly interesting about this piece is that is was decorated with the arms of the Hanseatic League (stamped into the clay): the double-headed eagle. An indication of a close link with the league.

Compare the arms on the jug with the same arms carved on stone (pictured in the photograph at the top of this post). The double-headed eagle is surrounded by a scrolling cartouche that contains the following in Latin and in abbreviated form:

Which translates as:
The German Hanseatic traders who are settled in London in the Kingdom of England 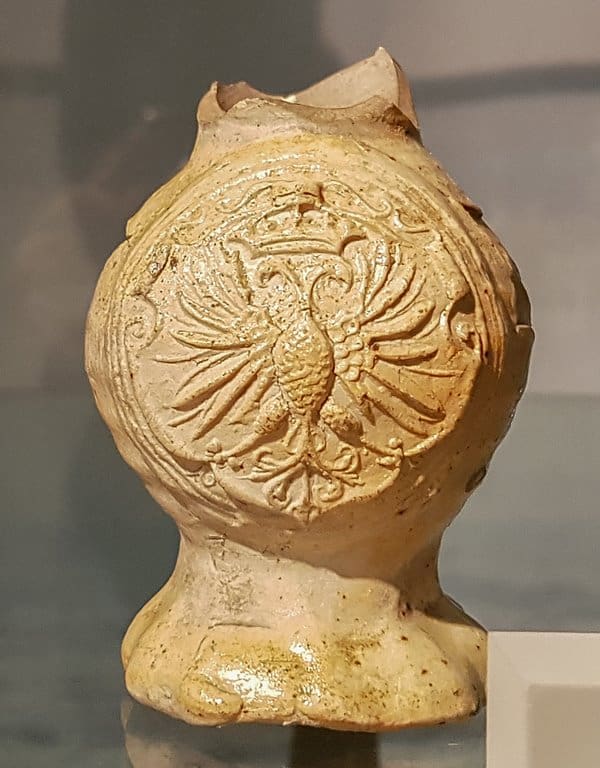 Researching the provenance of the plaque, the museum’s website tells an interesting story: the City of London accounts for 1670 include a payment to ‘Gabriel Cibbert stone cutter-for the eagle put on over the gate from Thames Street, fixed on John Ball’s buildings, £5’. Somehow the plaque then ended up in the garden of Bickley Hall (Kent) before it was acquired by the Museum of London in the 1920s.

Gabriel Cibbert was a Danish sculptor who was quite well known in London. His works are still visible in the city. Although a bit worn Cibbert’s statue of Charles II (1681) can be seen in Soho Square.

German stoneware bought to London by the Hansa traders.