The Canadian War Memorial in the New Forest

On a narrow side road through the New Forest and tucked away in the treeline, is a simple looking wooden cross, backed by a Canadian flag and surrounded by weatherworn photos and poems. It stands as a poignant memorial to the Canadian troops who were stationed in the New Forest during the build up to D-Day, many of whom lost their lives on that day and the subsequent months. 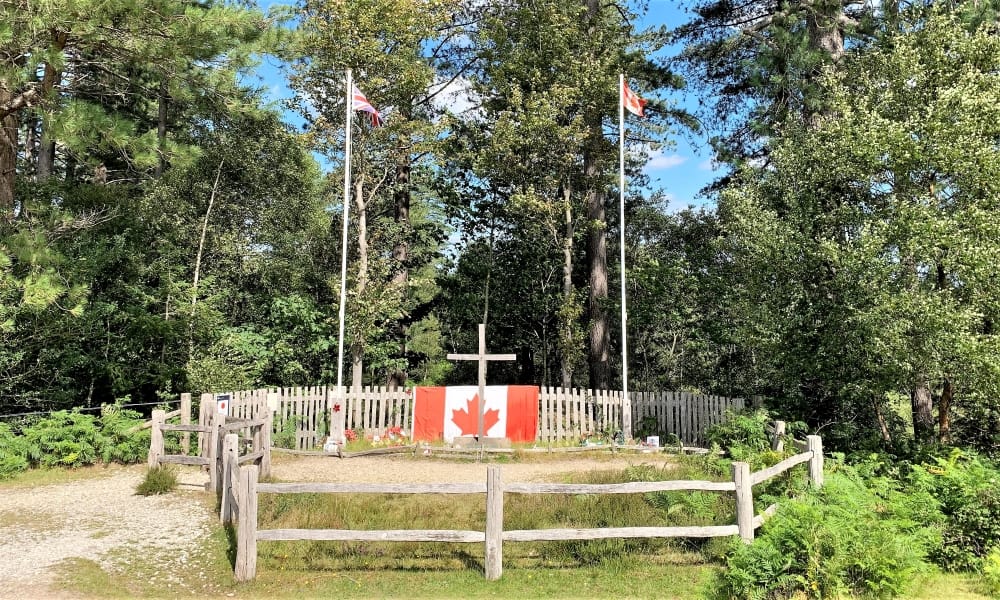 Due to its close proximity to the south coast and the embarkation points for Normandy, the New Forest saw a huge influx of troops before the planned re-occupation of France. Troops from all Allied nations gathered in the south of England, training and preparing for the big push, while the necessary equipment was manufactured and assembled for the journey across the Channel. Secrecy was a necessity, and the coverage provided by the trees of the forest kept many of the activities hidden from enemy planes flying overhead.

The Canadians in the New Forest, Hampshire

The Canadian Third Infantry were one of the battalions who arrived in the area in early 1944. Their chaplain looked around for somewhere to hold services for the men, and found Mogshade Hill, a scenic place with views over the hills and nearby Highland Water. He bolted together two pine logs to make a cross, erecting it next to a fence, and placed an altar covered in the Canadian flag in front of it. Men stood down the slope facing the altar and as it has a sharp drop behind it, it gave them an inspiring outlook over the forest.

The site was used for services from April 1944 until they left for the D-Day invasion. The Canadians landed at Juno Beach in the first hour of the assault, where they suffered terrible losses and casualties. By noon, the whole division was ashore and by the end of the day, they had penetrated further into France than any other Allied force. 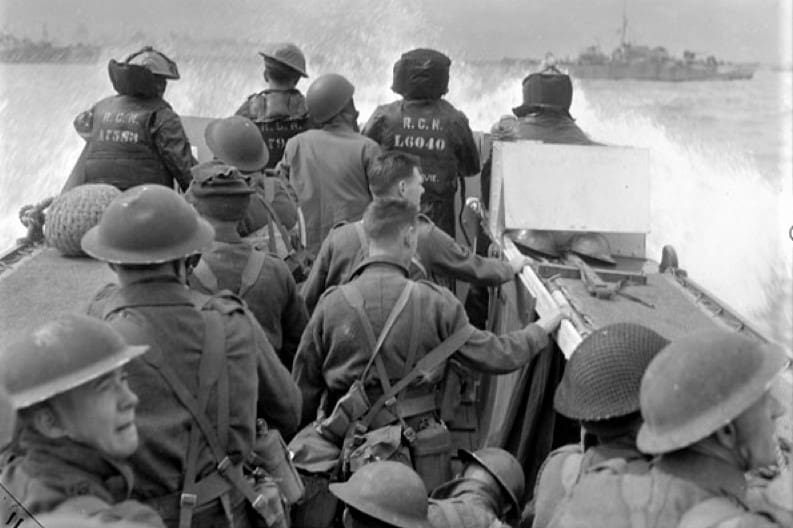 Canadian Infantry prepare to land on the beaches of Normandy.

The Chapel Becomes a Memorial

Their outdoor chapel remained as it was, until 1949 when the Deputy Surveyor of the New Forest wrote to the Canadian embassy to say that the cross was decaying and perhaps it could be replaced with a cross of New Forest oak, with a plaque, to act as a memorial to the Canadian soldiers who had worshipped there. The chaplain who had made the first cross wrote the words for the plaque, although it wasn’t put up until the 1960s.

The memorial is now enclosed in a small fenced area, with two flagpoles either side of the cross, a large Canadian flag behind the cross and an array of weather worn poppy wreaths, crosses, photos, poems and other memorabilia. Behind it is dense forest which falls away down a hill, a mass of vivid ferns and dark conifers, while opposite is exposed heathland; low level plants with tiny flowers, topped by open skies punctuated by the odd bleached tree carcass. 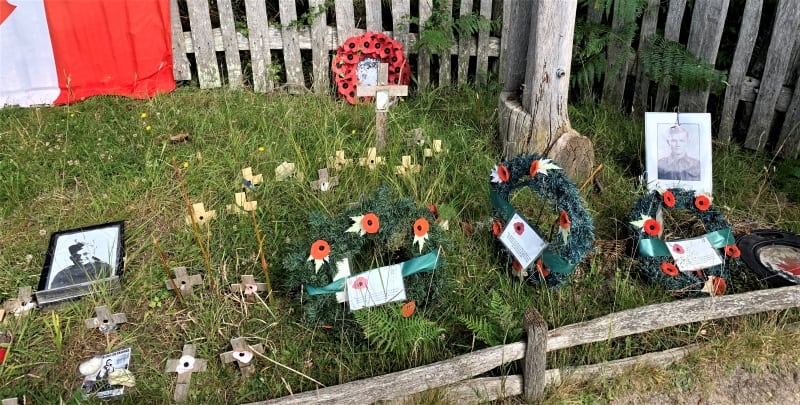 Photos, mementos and trinkets mix with wreaths and crosses at the base of the memorial.

People clearly still make emotional visits here, with plaintive messages to long dead grandfathers, poems from men who survived the onslaught to their fallen comrades, photos of a couple married during the war and as they are now in old age. It is a poignant and moving place to visit, and one of the few remaining visible reminders of the impact of the war on the Forest.

Where to park to visit the Canadian War Memorial?

The best place to park is at the Bolderwood Deer Sanctuary, which has plenty of free parking. It is a ten minute walk to the Canadian War Memorial through some beautiful forest.
What3Words: cluttered.november.pipes

Where is the Canadian War Memorial?

Facilities at the Canadian War Memorial

There is often an ice cream truck at the Bolderwood Deer Sanctuary parking area, and plenty of places to picnic in the forest. There are also public loos at the Deer Sanctuary. The nearest town is Lyndhurst, which has a full array of shops, restaurants and amenities.

Other World War II sites near the New Forest

The south coast has several places which have a direct connection to D-Day, as well as other World War II sites you can visit.

Follow the link (or click on the map) to go to the interactive map, showing archaeology and history sites and museums in England. Here you will be able to locate the Canadian War Memorial, and look for other World War II sites in England. You can also search for archaeology and history sites and museums nearby, or near a location of your choice. Go to the map >>