The Medieval Mizmaze of Breamore, Hampshire

High on the top of a hill, with views stretching far over the hills and fields of Hampshire and Wiltshire, is the Breamore Mizmaze. A designated scheduled monument, it is one of only eight surviving medieval turf mazes in England. And one of only two mizmazes. With an Elizabethan Manor and Countryside Museum nearby, Breamore is a perfect afternoon out for the whole family. 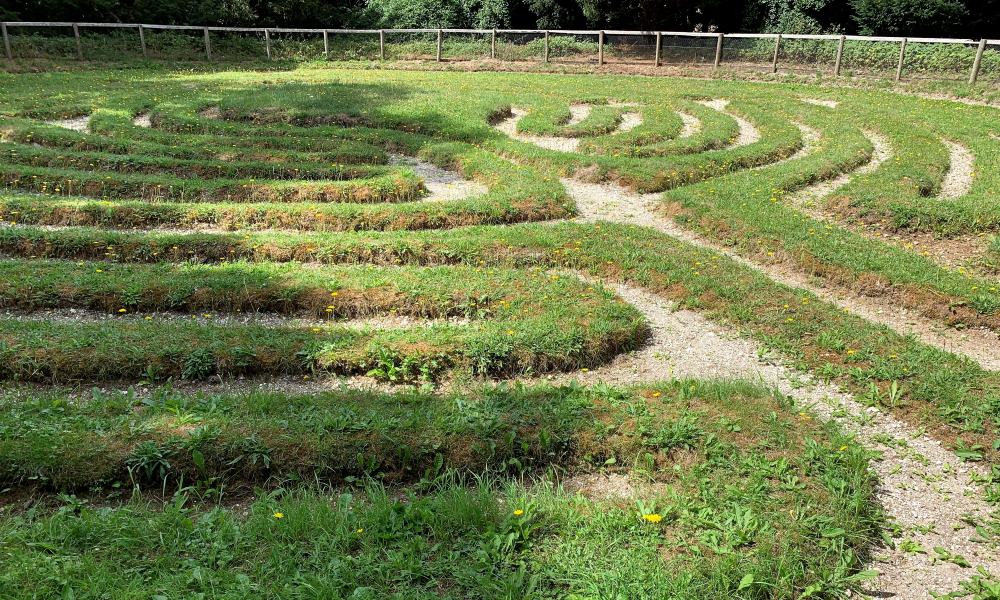 Breamore has a turf-cut Mizmaze, surrounded by a fence to protect it from foot damage.

Breamore is a small village about 10 miles south of Salisbury. Small and distinctly rural, there are several Bronze Age bowl barrows and a longbarrow (65 metres long) known as the Giant’s Grave in the area, as well as Iron Age hill forts. The Romans were here too. Although nothing remains of the Roman villa at Downton (you can see the mosaic in the Salisbury Museum), there is a Roman villa open to the public about three miles away in the village of Rockbourne. Here you can see the remains of what was a large courtyard villa that was occupied until the late 5th century AD. Artefacts recovered from archaeological excavations here are on display in the onsite museum. More recently in time, in the village of Downton, there are the remains of Norman motte-and-bailey castle. 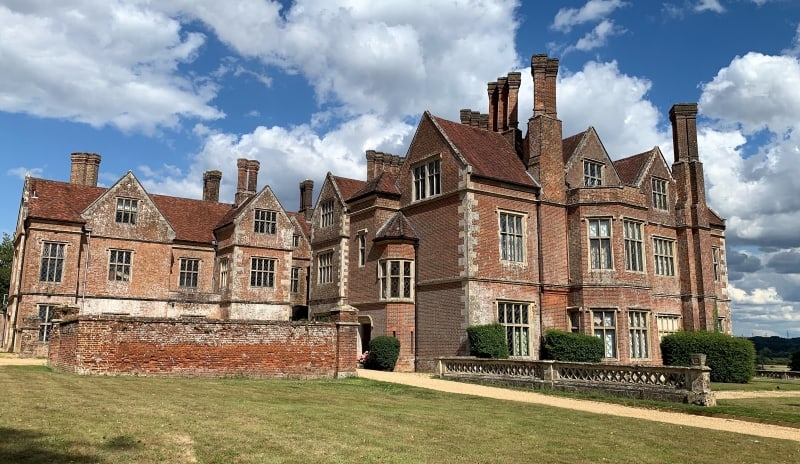 Breamore House is an Elizabethan Manor house surrounded by acres of countryside.

Breamore was the site of a priory of Augustinian Canons founded in the early 12th century, and it is believed that the mizmaze was created by them. The priory was dissolved in 1536, and no trace of it now remains, with Breamore House being built on the same land. Breamore House was completed in 1583 and was an Elizabethan Manor house. Sadly much of it was destroyed by fire in the 1800s, but it was rebuilt in the same style using salvageable elements and still looks the part, with some magnificent chimneys. In private ownership, it is open to the public from April to October and has a interesting countryside museum on site.

A History of the Breamore Mizmaze

The mizmaze is about two miles away from the house, on the top of a hill and surrounded by a copse of yew and hazel trees. A path of turf was formed by cutting down into the chalk and removing the vegetation on either side, rather than the more common method used where a chalk path was created by removing vegetation. The turf path leads to leads to a central mound. Eleven concentric rings, at a diameter of 84 feet, are bisected into quarters by a Christian cross, very similar in design to the well known labyrinth in Chartres Cathedral.

Without direct historical records, turf mazes are difficult to date. As they were , and still are, repeatedly re-cut, to remove intruding plants, any artefacts that may help with providing a date is also removed. The archaeological record is constantly being destroyed. Mazes were often around for centuries before being recorded. The Breamore Maze, for example, was first recorded in 1783, but its origins certainly go back centuries before that, built by the inhabitants of the priory.

The Breamore Mizmaze is thought to date to the 12th or 13th centuries. It was used by the monks for penitential purposes. They would crawl along the path to the central mound, all the while reflecting on their sins and saying prayers at specific points. 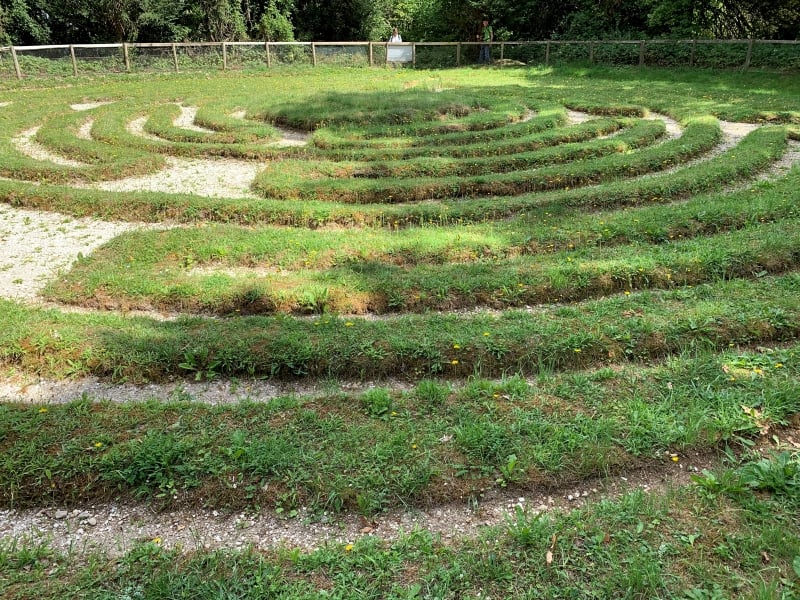 The Mizmaze is of the standard medieval design of a labyrinth.

Today the maze is protected from potential damage caused by footfall within a wooden fence. But it is still well maintained and looked after so it is clear to see. Visitors are able to walk all the way around it, as well as exploring the woods that surround it. 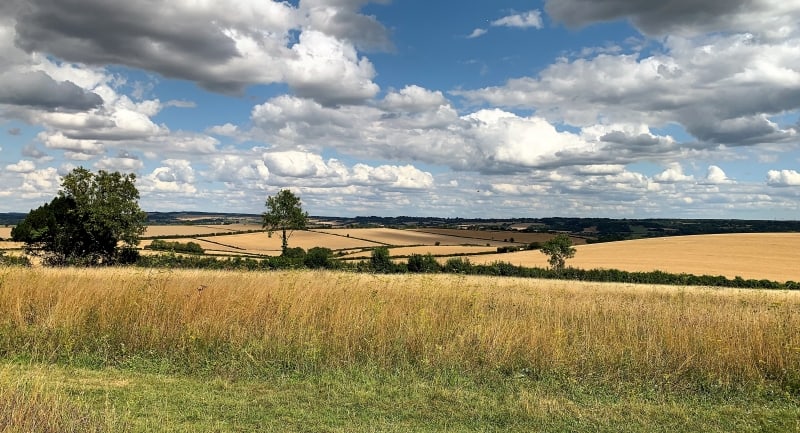 Wide open views from the Mizmaze, with not a road in sight.

A Brief History of Labyrinths and Mizmazes

Mazes and labyrinths have a long history with differing functions, despite their similarities. Because both labyrinths and mazes are made up of difficult and confusing pathways, many people think they are the same – some form of exercise or game in which you have to find your way out or to the centre. Labyrinths have a single path, whereas a maze has branching paths allowing choices to be made.

Historically, the earliest examples were in fact labyrinths – single path and used for spiritual purposes. A mizmaze then is more like a labyrinth because the path has no crossings or junctions. You could think of a mizmaze as a rope, coiled to fit the space available.

The earliest recorded labyrinth is in Egypt from the 5th century BC, written about by the Greek historian Herodotus. The most well known ancient labyrinth is perhaps the Cretan example, the one used to house the legendary Minotaur for King Minos of Crete. The walls of Troy were said to be labyrinthine, which is why many old mazes in the United Kingdom are called Troy Town. Labyrinths were frequently used by Romans, in a number of different ways including as images over doorways or inlaid into mosaic floors. 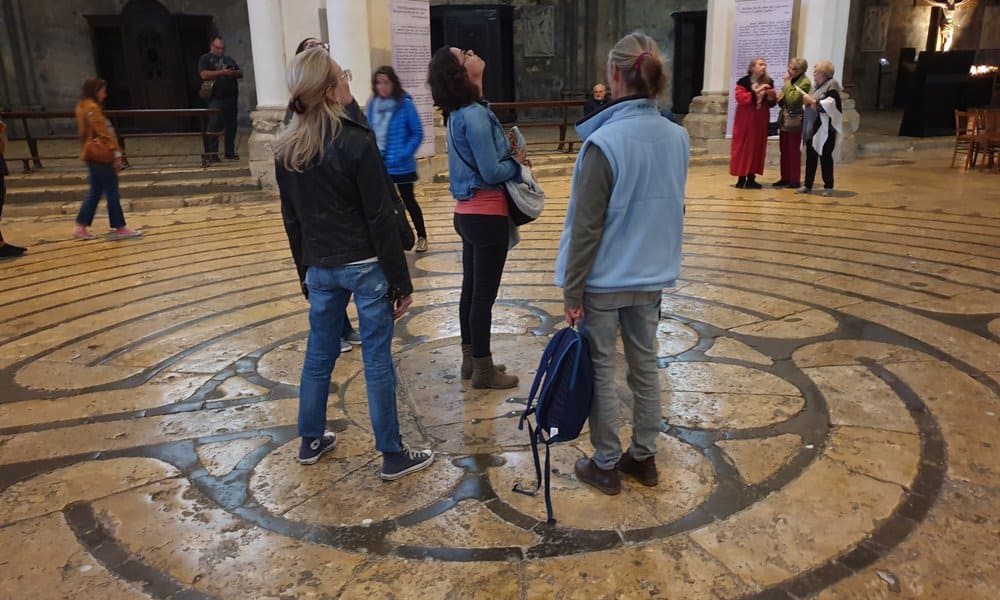 Chartres Cathedral has the most famous labyrinth design and dates from the early 1200s. The central area is known as ‘Jerusalem’ and people still walk the pilgrimmage of the labyrinth.

By the 5th century AD, the labyrinth took on a more spiritual and religious nature, and there are several theories as to their meaning. The winding path could represent the difficult life of an early Christian, or that it depicts the complex nature of sin, with the folds of the labyrinth representing the folds of sin. Others believe that they represent a small pilgrimage a person can take, and this seems to be the most popular theory. Certainly modern labyrinths, such as the one created a few years ago at St Fin Barre’s Cathedral in Cork, focus on the idea of a journey for contemplation, saying that ‘Visitors to the Cathedral can walk the labyrinth whilst praying, considering a problem, meditating, repeating a sacred word, using prayer beads or without any clear intent.’

Pagans and druids also claim that mizmazes have been used for their rituals, with druids using them for fertility dances and Pagans for holy days; the one at Breamore is used by modern day witches, as well as paranormal hunters who claim that they have seen ghostly presences and heard voices in the area. Certainly the yew woods surrounding the maze are atmospheric, being quite dark, but I didn’t see or hear anything untoward during my visit. 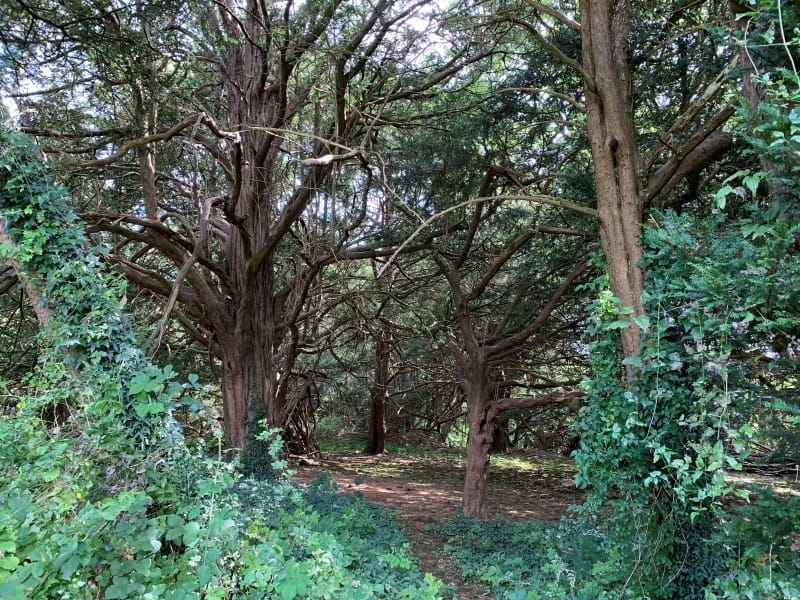 Surrounding the Mizmaze is a small copse of atmospheric woods.

Not all mazes were associated with spirituality, and there are many records of them being constructed in village greens, where they would provide entertainment and games during festivities. Outlawed by Cromwell, maze games were revived after the end of the Civil War and continued to the 19th century. Mazes still seem to be a popular feature within the UK, with new ones still being constructed, such as the Labyrinth Beazer Maze in the centre of Bath, or the countless maize mazes that crop up each summer.

The Breamore Mizmaze may be one of the oldest still around, but it is part of a long standing tradition that spans from the Iron Age to contemporary times, and being in such an isolated and beautiful spot, it is really worth visiting if you get a chance.

Getting to the Breamore Mizmaze

The mizmaze can only be reached on foot, and it is about a two mile walk from the nearest car park. If you are driving, the best place to park is in Breamore House car park, which is free, although only open when Breamore House is. You can also park just outside the car park, or near the church. Alternatively, you can catch a bus from Salisbury or Bournemouth – the X3 – get out in Breamore Village and walk just under the mile up to the house. 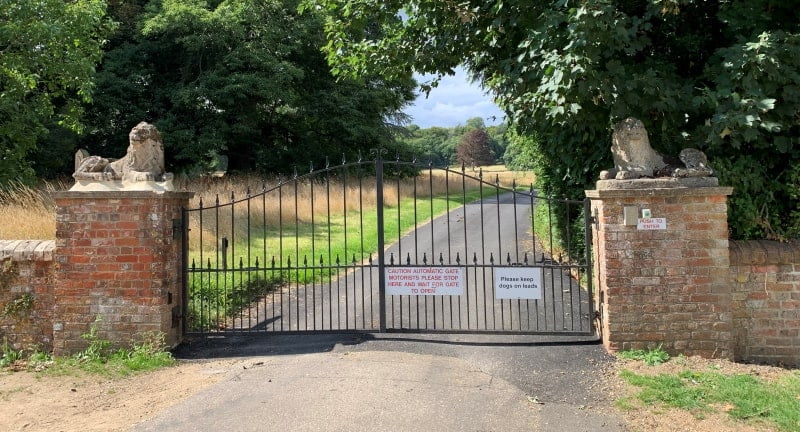 The path to the Mizmaze starts after you have gone through these gates – just press the button.

When you get to the house you will see a set of gates that look like you aren’t allowed in, but rest assured you are as it is a bridlepath, so it is a public right of way. Press the green button by the gates and they will automatically open. You follow the path past the house, (which is stunning and well worth a visit if it is open), and just keep on going on the path, which takes you through some beautiful woodland. The path forks at one point in the woods, take the right fork. The path then leads through open meadows, which positively hum with wildlife and are beautiful to look at, and at the end of which you will see a sign pointing the way to the mizmaze. It is about two miles, but is a lovely rural walk and worth the effort. 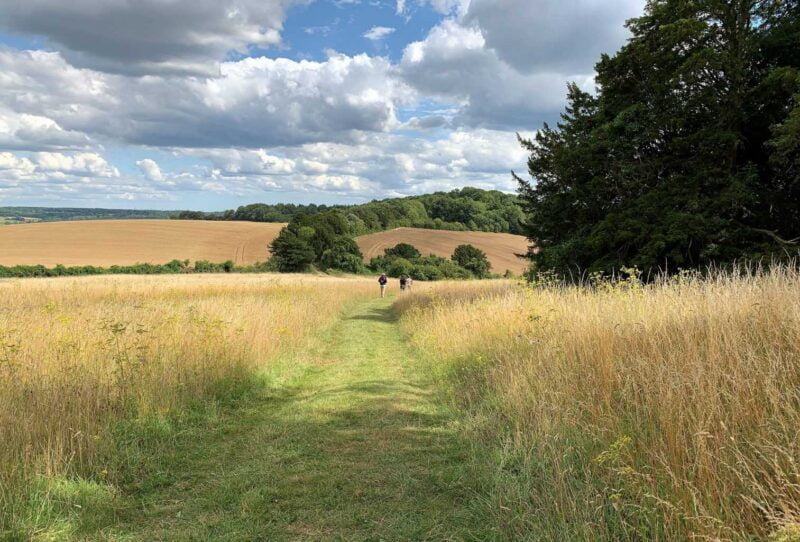 The fields are filled with the sound of crickets and the activity of wildlife.

Where is the Breamore Mizmaze?

Breamore village is close to the Hampshire-Wiltshire border, on the A338 that runs between Salisbury and Bournemouth. You can locate the exact position on our Interactive Map of Archaeology & History Sites and Museums in England. Once you have located the mizmaze, you can then search for other sites nearby.

It is open every day, all year round.

There are no charges for visiting or parking.

There are no facilities on site, but Breamore House has a cafe.