The Museum of East Anglian Life

One of several outdoor museums around the UK, the Museum of East Anglian Life is a 75 acre site in Stowmarket, Suffolk, based around the manor house Abbots Hall, with several historic buildings in the grounds. The focus is on the agricultural, industrial and home life of East Anglians over the years. Sarah and her son visited one chilly February day when they were visiting the region. 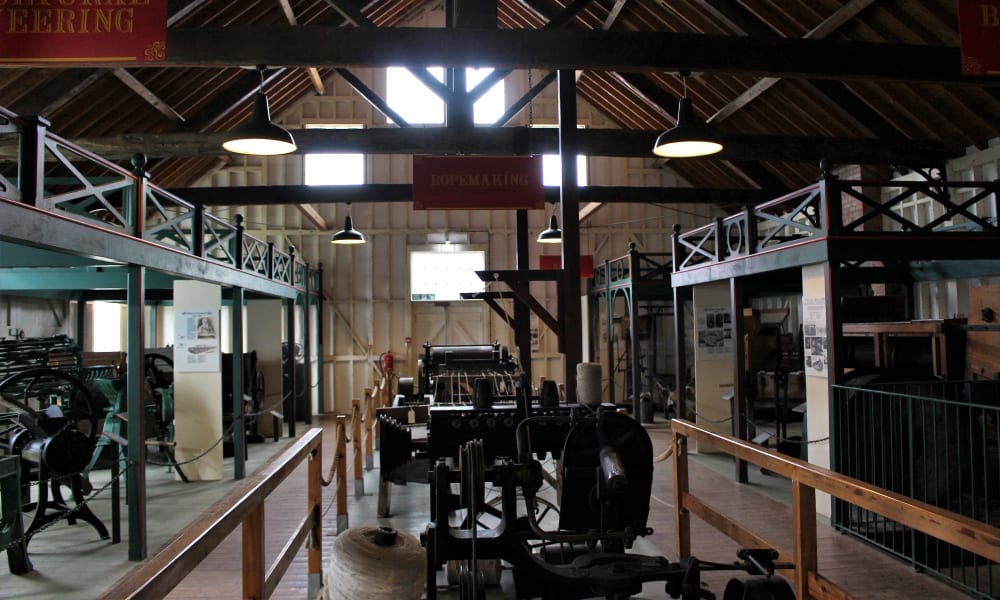 Displays of agricultural machinery at the Museum of East Anglian Life in Suffolk.

Opened in 1967, the museum is the result of farmer Jack Carter and the local history society collecting objects from rural East Anglia to try to document a way of life which was rapidly disappearing with increased industrialisation and mechanisation. They collected, preserved and exhibited at various locations, until they were offered a permanent home at Abbots Hall. Abbots Hall had once been part of the Medieval estate of St Osyth’s Priory in Essex. The estate had changed ownership many times over the years until it ended up with the Longe family. Initially they offered the museum two acres which included a medieval barn, but much of the rest of the estate and the house passed to the museum when the last members of the Longe family died in 2004.

The site now consists of the hall and 17 historic buildings around the site, which contain over 40,000 objects. Set in rolling fields with a river and a small farm, the site is very child friendly and has plenty of activities for children of all ages as well as holding regular workshops for adults, which include everything from forest bathing to upcycling days.

The Boby Building was the first one we visited, which was built around 1870 and was once the biggest factory in Bury St. Edmunds, employing nearly 200 men. The company started life as ironmongers but expanded to agricultural machinery, until it closed in 1972, and the interior is filled with a whole assortment of industrial machinery, from steam engines to complicated looking mechanisms. 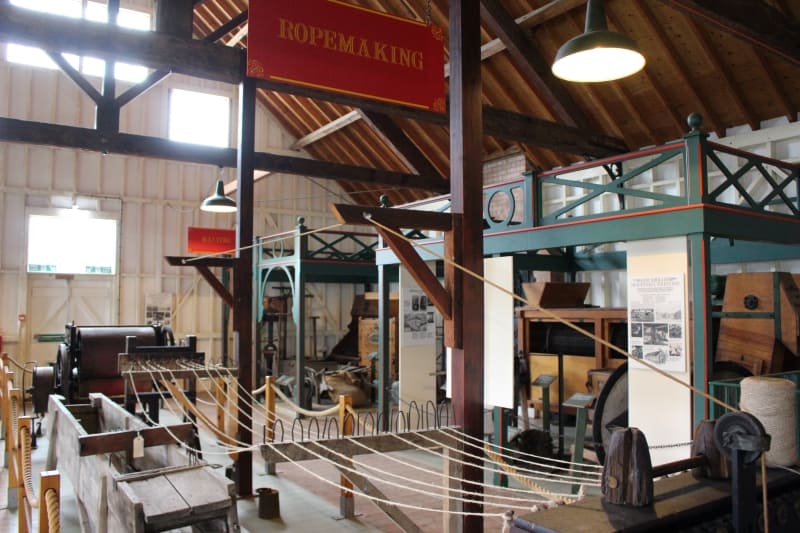 With displays of traditional crafts, this one of how ropes were made was interesting.

One part of the building is divided into small sections which each show a different trade shop laid out much as they would have been. There was a clockmaker, sadler, a basket maker, wheelwright and more. We particularly liked the printing press which was illuminating, as well as the horse hair processing factory, which was not something I had known existed. My son had a go at basket weaving and laying out letters in reverse for the printing press, both of which kept him absorbed for some time. 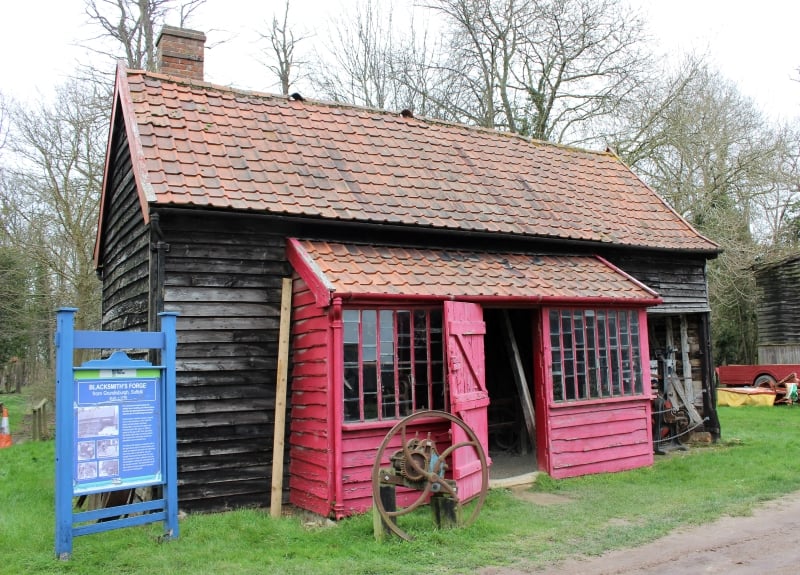 The blacksmith’s forge is filled with tools of the trade.

Our next port of call was a blacksmiths forge which had been built in 1750 and came from Grundisburgh in Suffolk. With a tall brick chimney which stretched up through the tiled roof and countless tools of the trade lining the walls, it was hard to make out what was what, but easy to see how vital this trade once was to a rural community. We followed this with a visit to the Bone Building, which tells the story of Ipswich firm Ransomes, a significant British manufacturer of agricultural machinery, which started in 1789. Over the centuries they made such diverse equipment as steam engines, iron work for astronomical telescopes, lawnmowers and aeroplanes during World War I. The modern building is filled with their various products from over the years, much of it beautifully restored and gleaming in the light. 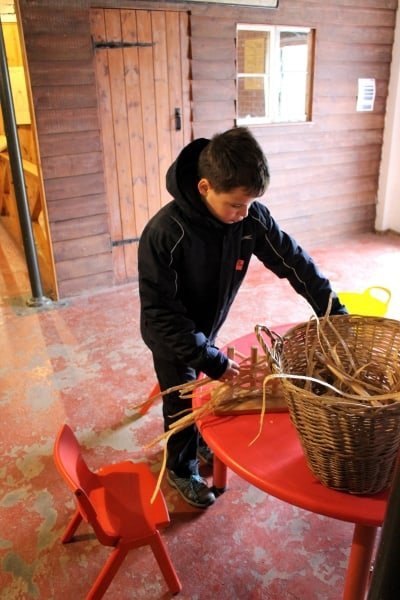 Having a go at basket weaving. 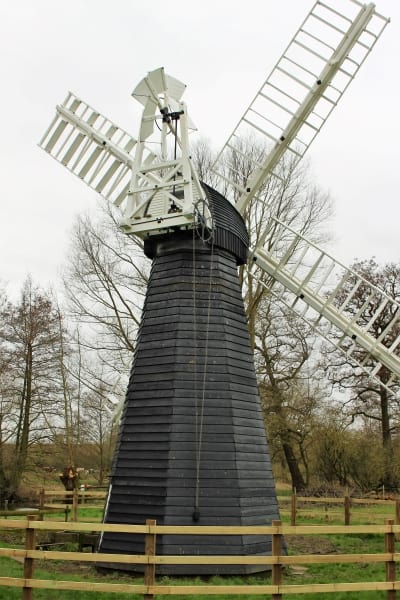 The wind pump sits next to a small river on the estate.

We headed off further into the site, aiming towards a windmill we could see in the distance. Stopping off at the Heritage Farm, where we admired the sheep and were asked to help feed the rabbits, we made it to the windmill which was built in the 1850s and was originally located on the Minsmere Levels in Suffolk. It was actually a wind pump, one of four pumps that drained the marshlands of the levels, land which had been used for grazing since the 13th century. It had been in use to prevent flooding for nearly 100 years until World War II, when weather damage put it out of action. Dismantled and re-erected at the museum, its position next to the river shows how it once would have looked in its prime, sails turning slowly in the cold wind. 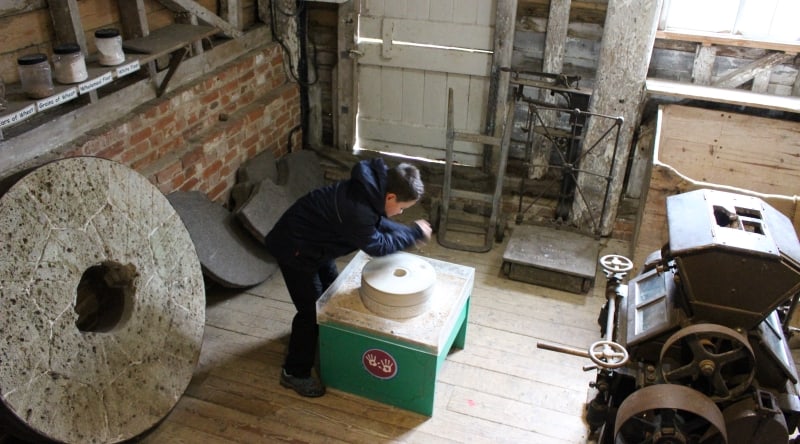 Attempting to grind flour by hand in the watermill.

We explored a mill house and cart lodge which had been built in 1765 in the village of Sutton. A watermill had sat on that same site in Sutton since the Domesday Survey of 1086, and this one had three pairs of stones to grind flour and barley for animal feed. By the 1960s it was unable to keep up with bigger mills and became a grist mill, until 1968 when it was threatened with being submerged under a new reservoir. The reservoir went ahead on the condition that the building was saved and moved to the museum. Full of wooden equipment and a huge iron water wheel, we climbed the whole way up and also tried our hand at grinding flour. 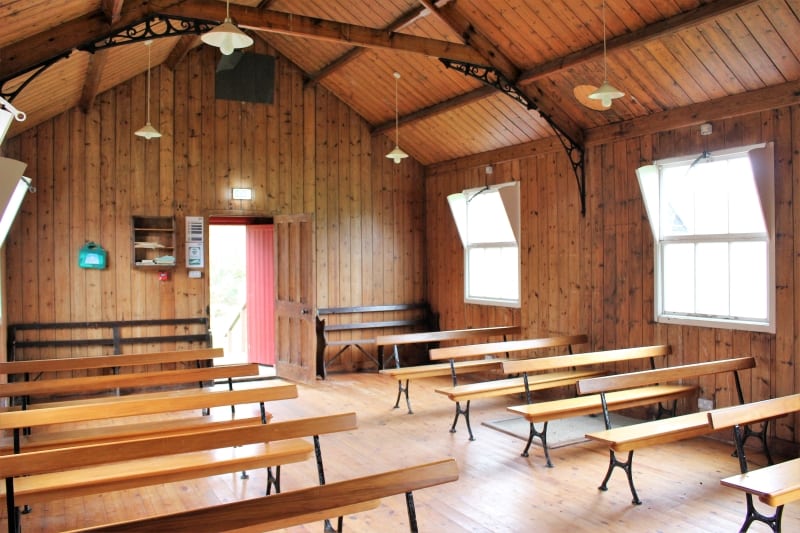 The tin tabernacle is a simple but homely building.

Nearby is an old tin tabernacle from Norfolk, built in 1890. Used as a chapel for the village of Great Moulton, this flat packed building was once the focal point of the village. Lined with wood and furnished simply with wooden furniture, including childrens chairs, benches and desks for the Sunday school which taught up to 60 children at a time. It was a very uncomplicated building yet quite evocative. We took it in turns to ‘preach’ from behind the lectern and then headed off to find Abbots Hall. 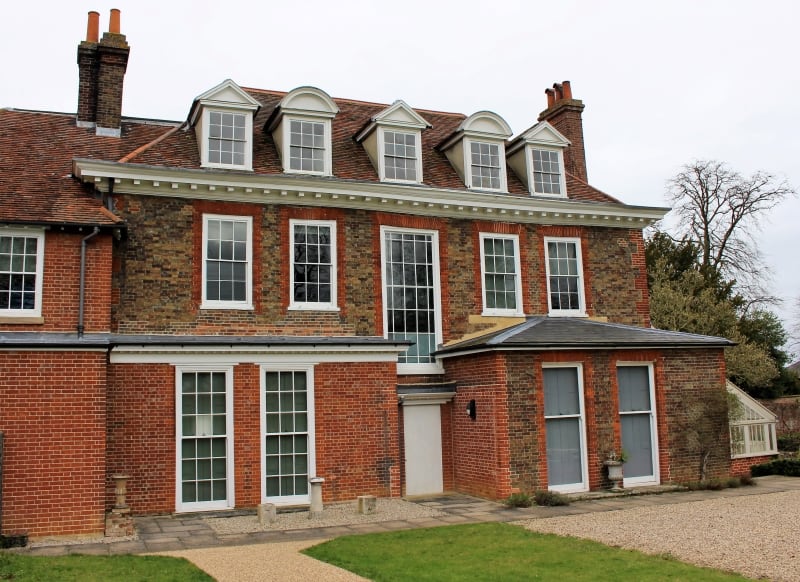 Abbots Hall has been extended and modified over the centuries.

The present Queen Anne style Abbots Hall was built in 1709, but there has been a house on the site since the 12th century and recent archaeological excavations have given indications of Roman occupation of the site. Not much is known about the occupants of the house over the years as it changed hands many times before it became part of the museum. The house is not intended to be presented as reconstruction of its past ownership, but instead has been curated to have each public room exploring a different notion of the concept of home and belonging. 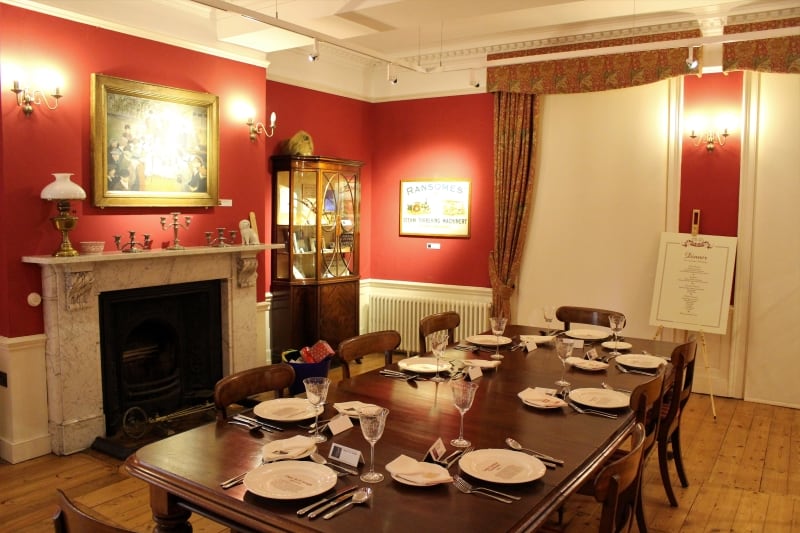 The dining room gave insights into local pioneers in the food and farming industries.

We explored a room with the history of the house and one laid out as a dining room with a ‘fantasy dinner party’ of local pioneers in the food and farming industry. I particularly liked the room which explored the work of George Ewart Evans, who is known as the father of British oral history. He moved to a rural Suffolk village in 1947 and started writing about the people of this remote village, “Listening to … people I realised that they were historical documents, books that walked, and nobody was recording them.” With his research focused on rural working people, their dialects, songs and working lives of a life that was stretched far back into traditions that were swiftly vanishing, his first book, ‘The People That Cut the Hay’, published in 1956 is now considered a classic. 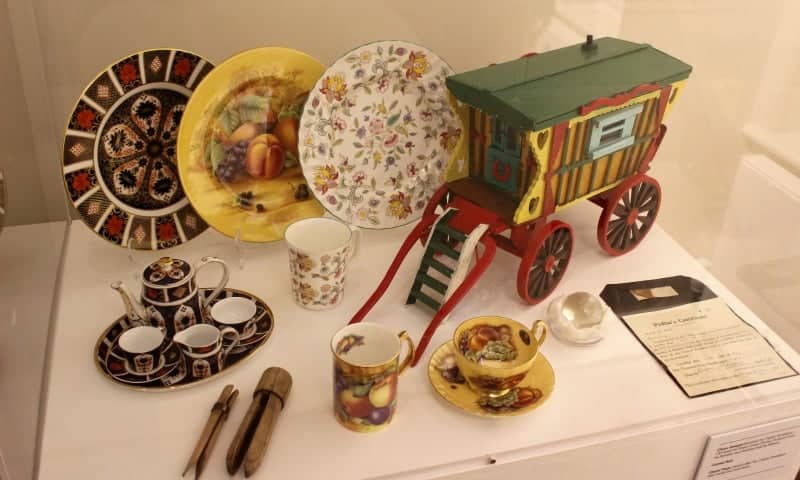 Artefacts from Travellers show the objects that express their feelings towards home.

Another room looks at life in St. Audrys, a psychiatric hospital in East Suffolk, and the lives of the inmates who lived there. Iron baths, bed blocks, clothes and crockery are all on display, along with photographs and details of the doctor who tried to foster a sense of well being and community amongst the inmates. A small side room examines the notion of ‘home’ amongst the peripatetic Romany and Gypsy peoples, put together by two Traveller artists from the Traveller community, and includes artefacts that would be found within it from both the past and present. Pedlars certificates sit next to crystal balls, gypsy pegs and a huge floral tribute to a gypsy queen. 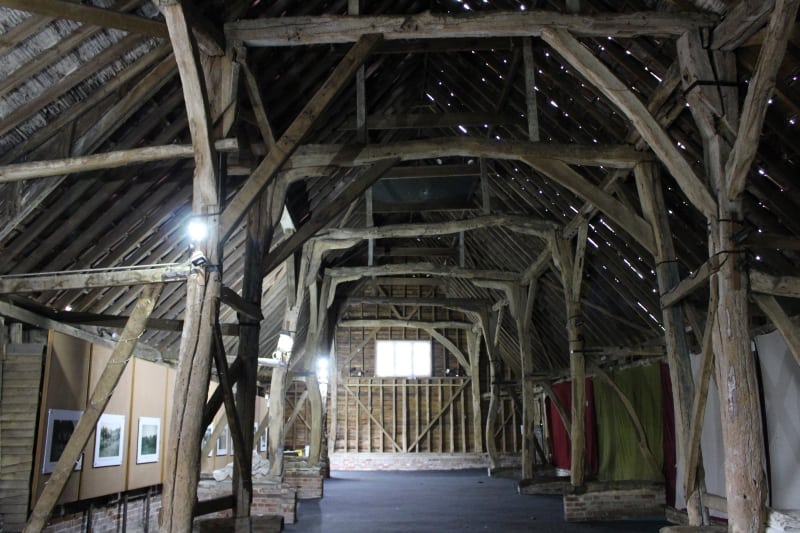 The interior of this ancient barn shows the simplicity involved in its construction.

Outside Abbots Hall is the 13th century barn which was already on site. It has been repaired and adapted over the centuries, but is still a remarkable building to stand inside and see the huge timber frames in this seemingly massively oversized building. It now stands empty and you can just imagine the cobwebs that must gather in the top recesses, or how the rain falls through the huge gaps in the tiled roof and just wonder at the people who have used it over the past 700 odd years. 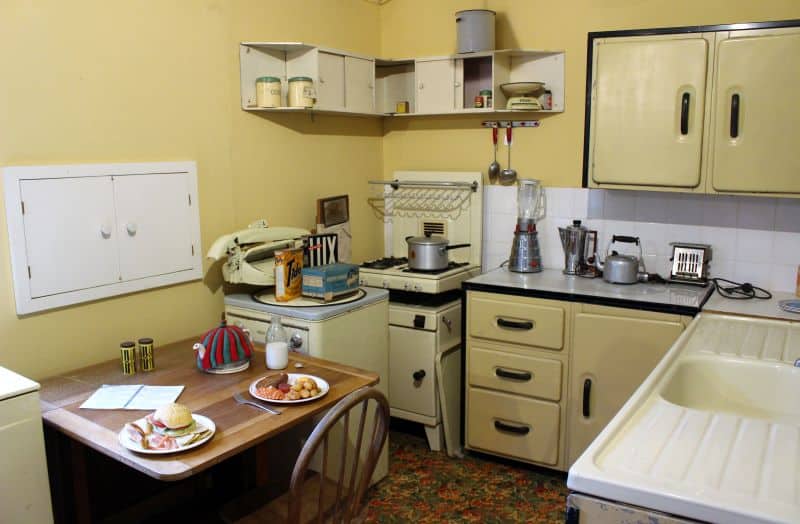 The museum was a fascinating glimpse of a rural way of life in Suffolk that is now long gone, and although much of the agricultural machinery was of less interest to us, the re-creations of the homes, businesses and rooms put everything into an understandable context, and the hands-on kids areas were absorbing and helped to bring a potentially dry subject matter alive.

Parking is at Illife Way IP14 1DE, in either the Asda car park or the public one opposite. Walk towards the supermarket to find the entrance to the museum to the side of it.