The Rufus Stone Monument in the New Forest, Hampshire

An ironclad stone near the small New Forest village of Minstead is a reminder of William Rufus, the third son of William the Conqueror, who was killed there in a hunting accident, although whether by accident or design is still a matter of much debate today. Conveniently located next to a car park and some stunning forest scenery, it makes a great base for a stroll in the woods while learning more about this infamous Norman ruler. 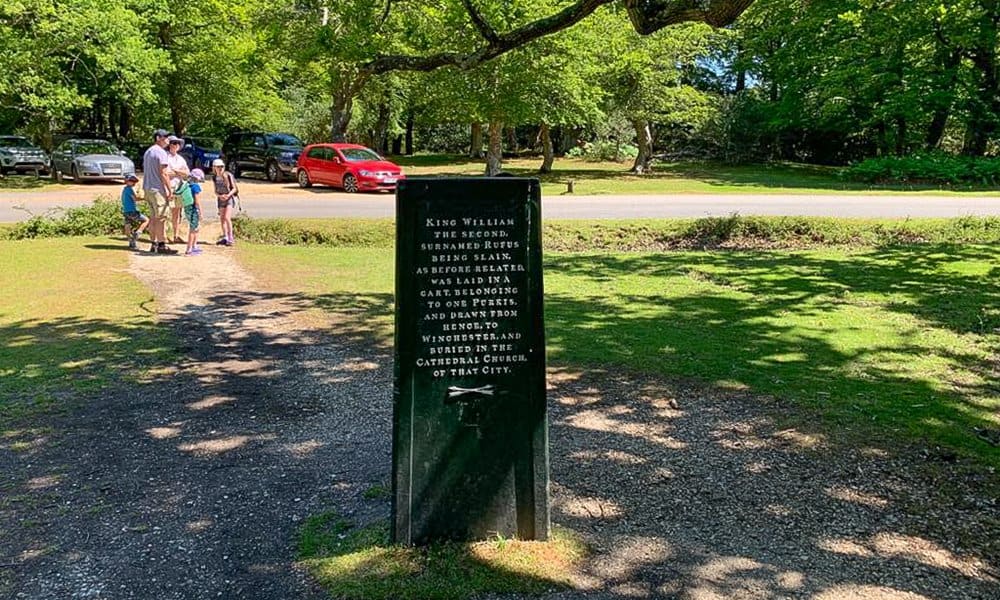 The Rufus Stone is by the side of the A31 main road through the New Forest.

Outside the village of Minstead and in the heart of the forest, while also being conveniently just off the A31 main road, the Rufus Stone is a small stone which marks the spot where William Rufus is said to have died. Although many historians now believe that the actual spot is closer to Beaulieu on the south coast, this is the place that has been marked since the 18th century and is supported by local lore and legend.

The New Forest was marked as royal hunting grounds in 1079 by William the Conqueror, who reigned over England until his death in 1087. On his death, his eldest son Robert inherited Normandy, the second son had died in a hunting accident in 1075 and William inherited England, with the youngest son Henry, left landless. William II was more commonly known as William Rufus due to being born with red hair and a florid complexion. He was a very unpopular king, helping himself to church funds, falling out with nobles and his brothers and treating his people with contempt and disdain.

On the 2nd August 1100, he was hunting boar and deer in the New Forest with some noblemen, when an arrow was fired by a French nobleman at a stag, which ricocheted off an oak tree and ended up in the King’s lungs, killing him almost instantly. The French nobleman, Sir Walter Tyrell, immediately made for Normandy, fearing retribution for killing the king. It is said that he stopped at a blacksmith in the forest to have his horses shoes put on backwards so that he could not be traced. He needn’t have wasted his time, for it appears that people weren’t bothered. The King’s body was left where it was, until a local charcoal burner called Purkis put it on his cart and took it to Winchester, where he received a very low key burial in the cathedral. 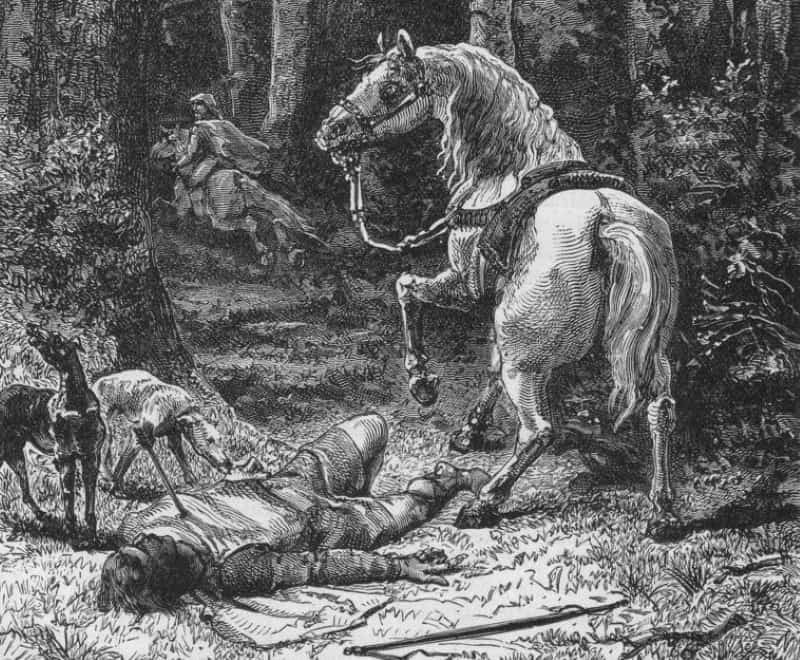 On receiving the wound the king uttered not a word; but breaking off the shaft of the arrow where it projected from his body… This accelerated his death. Walter immediately ran up, but as he found him senseless, he leapt upon his horse, and escaped with the utmost speed. Indeed there were none to pursue him: some helped his flight; others felt sorry for him.

The king’s body was placed on a cart and conveyed to the cathedral at Winchester… blood dripped from the body all the way. Here he was buried within the tower. The next year, the tower fell down. William Rufus died in 1100… aged forty years. He was a man much pitied by the clergy… he had a soul which they could not save… He was loved by his soldiers but hated by the people because he caused them to be plundered.

William of Malmesbury in his ‘Chronicle of the Kings of the English’ (c. 1128) 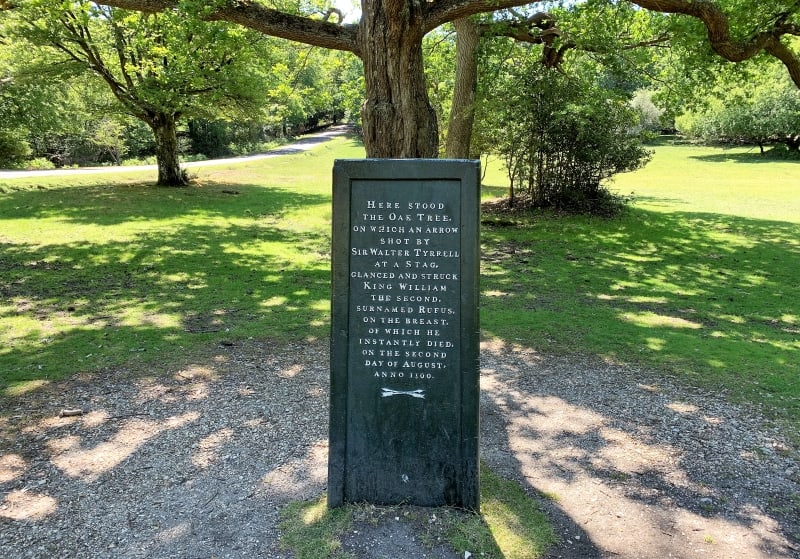 The oak tree behind the stone is a descendent of the original tree.

The stone was erected in 1745 by John Lord Delaware, although the one you see today is a newer version erected in 1841, as the original was vandalised and defaced. The original oak tree which it commemorates is long gone, but there is still an oak tree there, perhaps a descendant of the original one. 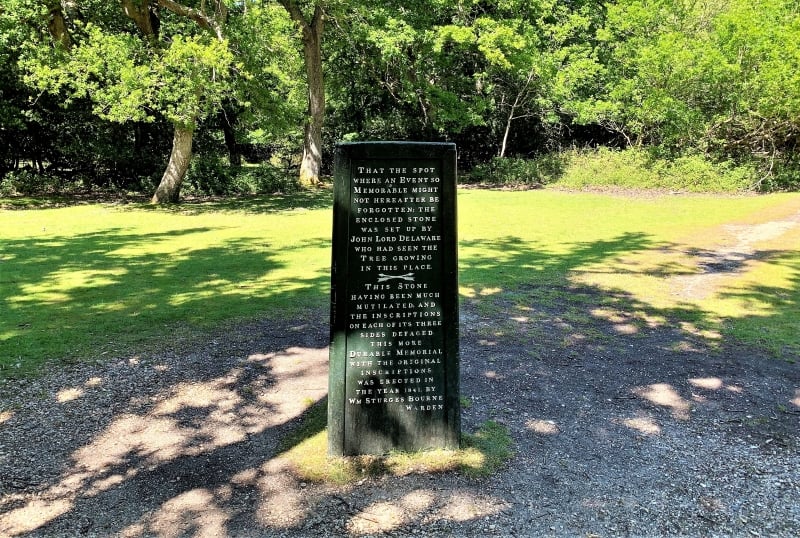 One of the three sides of the Rufus Stone.

The three-sided stone is inscribed as follows:

Here stood the oak tree, on which an arrow shot by Sir Walter Tyrrell at a stag, glanced and struck King William the Second, surnamed Rufus, on the breast, of which he instantly died, on the second day of August, anno 1100.

King William the Second, surnamed Rufus being slain, as before related, was laid in a cart, belonging to one Purkis, and drawn from hence, to Winchester, and buried in the Cathedral Church of that city.

That the spot where an event so memorable might not hereafter be forgotten, the enclosed stone was set up by John Lord Delaware who had seen the tree growing in this place. This stone having been much mutilated, and the inscriptions on each of its three sides defaced. This more durable memorial with the original inscriptions was erected in the year 1841, by WM Sturges Bourne, Warden.

The woodland car park opposite the Rufus Stone.

How to find the Rufus Stone

Parking for the Rufus Stone

Parking is directly opposite the stone in a woodland clearing and is free of charge. You will see brown signposts saying ‘The Rufus Stone’.

Where to eat and drink when visiting the Rufus Stone

The nearby Sir Walter Tyrell is one of many places in the area. It is a traditional British pub which has a large garden with a good kids play area.

Where to stay in the New Forest

There is no shortage of accommodation in the forest, from 5* hotels to B&Bs and campsites.