Tuckers Hall was built in 1471 AD. It was once the central hub of the booming woolen cloth trade in Late Medieval and Early Modern Exeter. The Guild of ‘Weavers Fullers and Shearmen’ regulated the local cloth industry at the hall, a craft which contributed extensively to the wealth and reputation of Exeter as a city. Today, the ground floor museum helps to tell this fascinating story, while the upper floor hall interior impresses to no end with its barrel vaulted ceiling and decorated wooden panelling. Incredibly, this place is not as well known or visited as it should be. When I came to see the hall on a sunny day in July, I was blown away by the elegance of its interior and the remarkable history of the Guild – this is the story of my visit. 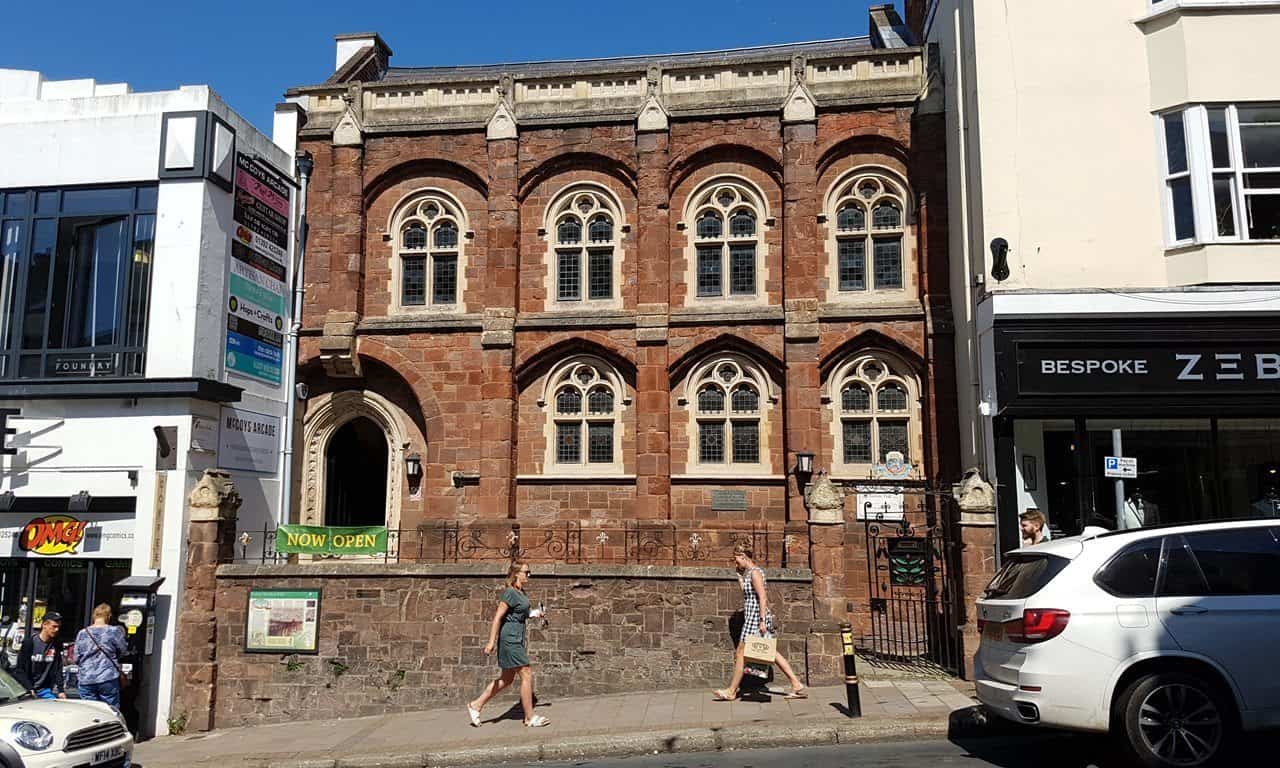 A view of the Victorian exterior from across the street.

Walking down along the lower-end of Exeter’s Fore Street and away from the bustling high street chains, my tendency is to simply ‘pass through’. I have probably glanced over momentarily at a building resembling a Victorian chapel on numerous occasions. When in fact, the place that I have always so promptly dismissed, is arguably one of the most influential and important buildings in Exeter’s history. Beyond the red brickwork lies a medieval wonder – that of Tuckers Hall. Ornately decorated, it has been occupied by the provincial Guild of Exeter’s woollen cloth trade – of ‘Weavers Fullers and Shearmen’ since 1471 AD. What I discovered during my visit here, is that behind these brick walls is a story of the rise and fall of Exeter’s most significant industry in times past. It is a tale that needs to be told – and I believe that this elegant meeting hall, with its precious history, is the true ‘hidden gem’ of Exeter.

On arrival outside the wrought iron fence, I realised how easy it could be to miss this place altogether. Not because I found it physically challenging to access – but slightly set-back from the roadside, the building’s exterior seems rather modest compared with the historic significance and grandeur promised within. A closer look though, and I began to notice the detail: the coats of arms, gothic-arched stained glass windows, and the ‘Tucker’s Hall’ plaque, offering a clue to there being something of interest inside.

Contrary to my previous knowledge, it turns out that Exeter actually has a lot to thank the woollen cloth industry. By the 15th century, it was producing around a third of the country’s cloth – yet it was still competing with other local towns for trade. Advantageous though was the city’s proximity to the main trading port at neighbouring Topsham, and network of water channels from the River Exe, used to power its watermills. I was also rather taken aback to learn that the land here was first donated to the Guild during the mid-1400s AD. The building was originally built as a chapel, with the upstairs hall being used as a meeting place. However, the reformation in the 16th century, saw the religious use of the space here end. After some Tudor ‘kerfuffle’ (concerning ownership of the building) the Guild was awarded its striking coat of arms – of weaver’s shuttle, burling irons, teasel frames, and shears. In 1620 AD, a royal charter was obtained: the ‘Incorporation’ was born – and the ‘heyday’ began. 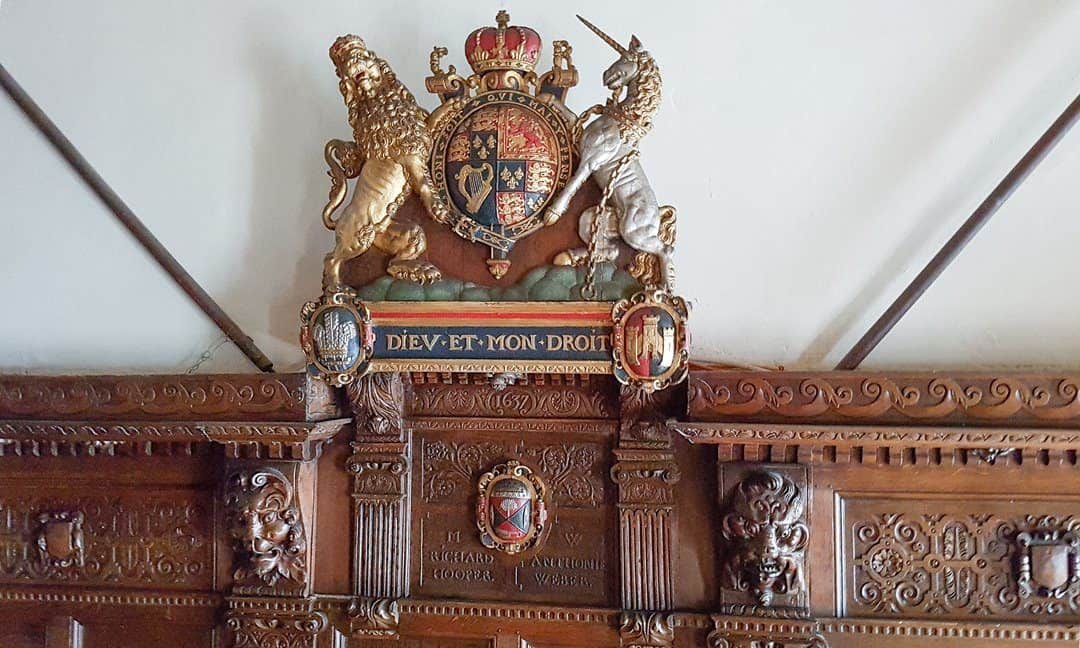 The striking coat of arms of King Charles I marks the beginning of the Incorporation following the Royal Charter in 1620 AD.

Over the next hundred years or so, Exeter’s woollen cloth trade generated great wealth and prestige for the city, its merchants, and the Guild. Trade output was at its highest during this time – exporting to countries such as Spain, Portugal, France and the Netherlands. Important connections were also made between the Incorporation and the London Guild (a relationship that still remains strong today). I get a real sense that Exeter was transformed during this time, and established itself a place on the map as a prominent trading power. As can often be the case though, maintaining success from such considerable growth can be challenging – and decline started to set in. During the 18th and 19th century, changes were beginning to occur within the industry – mechanisation, and tough competition, resulted in a gradual diminishing of trade. As the rich merchants ‘abandoned ship’ one by one (many pursued successful careers in banking), the majority of poor workers were left with nothing except the burden of hardship and poverty. The upper hall was even leased to the Freemasons for a period during the 1800s, as was the lower hall for use as a Sunday school. This did raise some income – though not nearly enough.

Although the Incorporation carried on throughout the years, it was only really in the mid-20th century that its membership began to flourish once again. Incredibly, Tucker’s Hall has stood defiant for almost 600 years. Yes it needed the ‘odd bit of work done’ (the Victorian renovation of the exterior being one example). Nevertheless, it is a permanent symbol of Exeter’s historic past, bearing a story of importance within its walls – and after seeing this place with my own eyes, I knew I had to get the word out and write this article.

Astoundingly, Tucker’s Hall is still a functioning meeting place for the Guild today. As an attraction, it is solely reliant upon volunteers. Public opening hours are limited – so I would advise you to plan your visit! Do not let this put you off though. I was impressed to find an informative and well-thought out exhibition on the ground floor. Going back a few years (1675 – 1841 AD to be precise), the space was used as an all boy’s school. Nowadays, the area uses a combination of artefacts, paintings, interactive archives, and information boards to introduce the story behind the building. I couldn’t get enough of being able to scroll through centuries of written Guild meeting minutes which have been painstakingly digitalised. It was simple to use and really brought home the sheer length of time the Guild and building have existed. 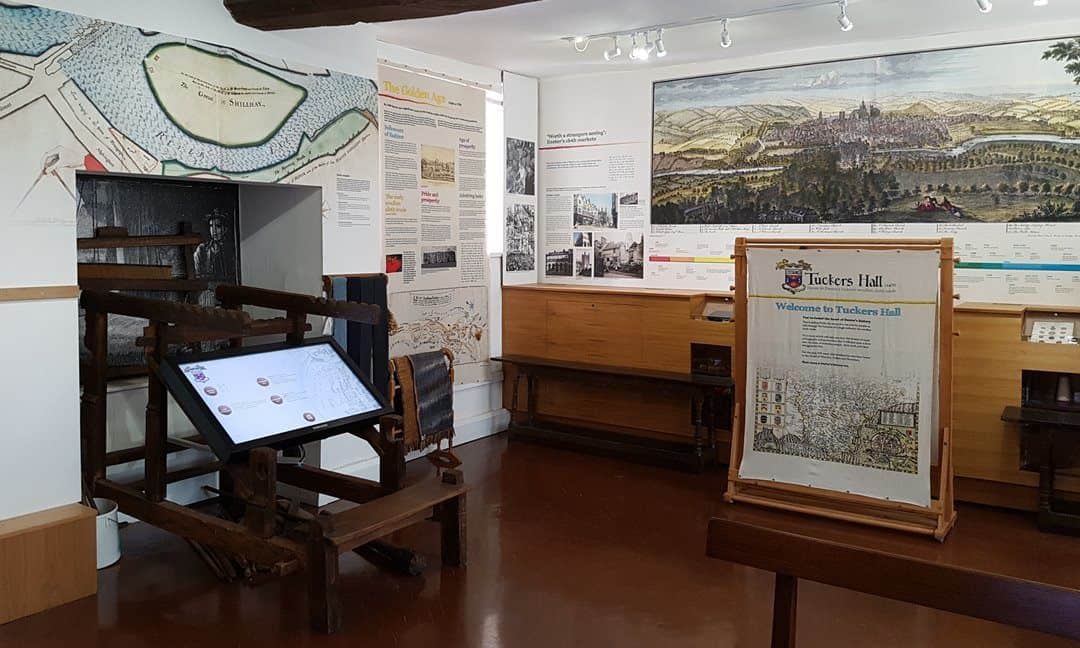 The ground floor museum is full of information, interactive displays, and imagery.

I have to say though, equally as invaluable as the displays, are the enthusiastic volunteers and guild members who work here (I spoke with a wonderful lady during my visit). As well as being remarkable ‘fountains of knowledge’, it became apparent to me how much pride and dedication she had towards the building, its rich history, and heritage. What the staff and mini-museum provide is appetising historical and local context in prelude to the ‘main event’. This transforms the hall from being just a beautiful shell which can be admired aesthetically – to somewhere of meaning. It brings the place to life.

Climbing the reconstructed oak staircase, I was full of anticipation about entering the hall for the first time; and to describe it as merely ‘impressive’ would be an unforgivable understatement. There was so much for my humble eyes to feast on I did not know where to look first! The lavish vaulted barrel ceiling and decorated 17th century wooden panelling were immediate stand-out features. A brass candle chandelier hung above a long dark-wooded meeting table: rows of chairs lined on either side, with two more intricately carved seats at opposing ends (commanding positions of importance). A gavel lay at what appeared to be the head of the table, with a large sculpted coat of arms, belonging to Charles I, mounted on the wall behind. On the far wall were two sets of military pikes positioned in a crisscross formation. I actually had to blink a couple of times – was I really still standing inside a building in 21st century Exeter… or had I somehow been transported back in time? 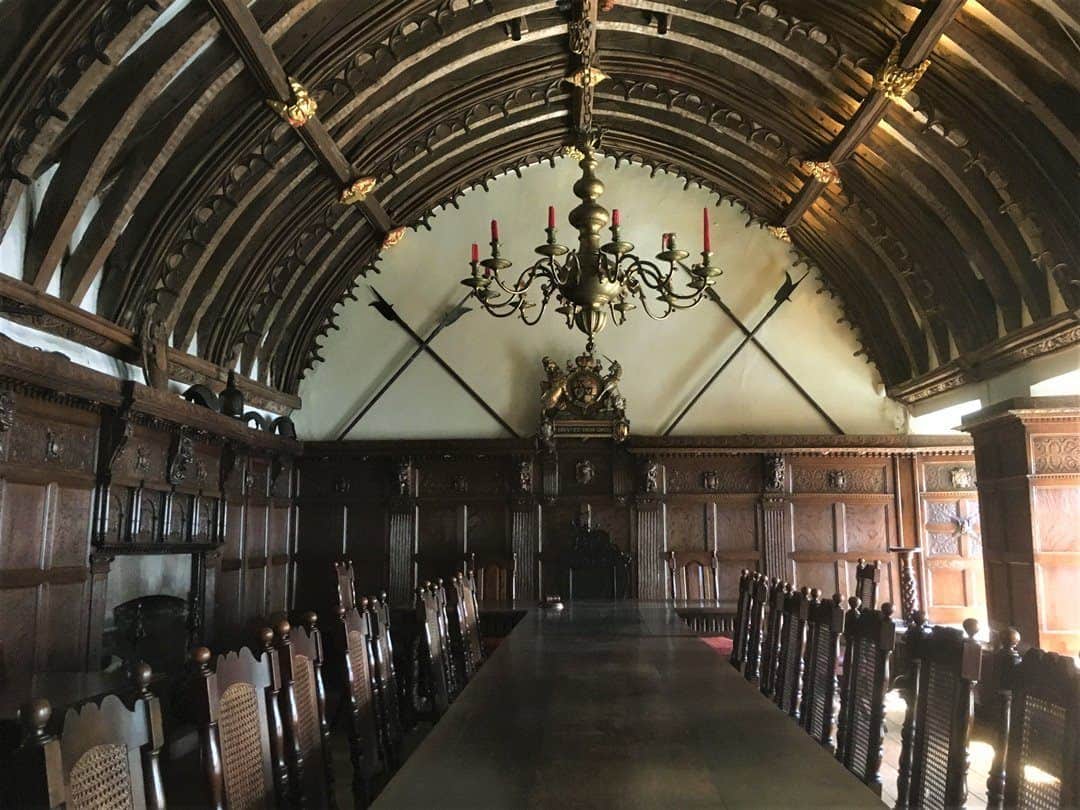 The stunning upper hall with grand oak table and chairs where the Guild have been meeting for centuries. 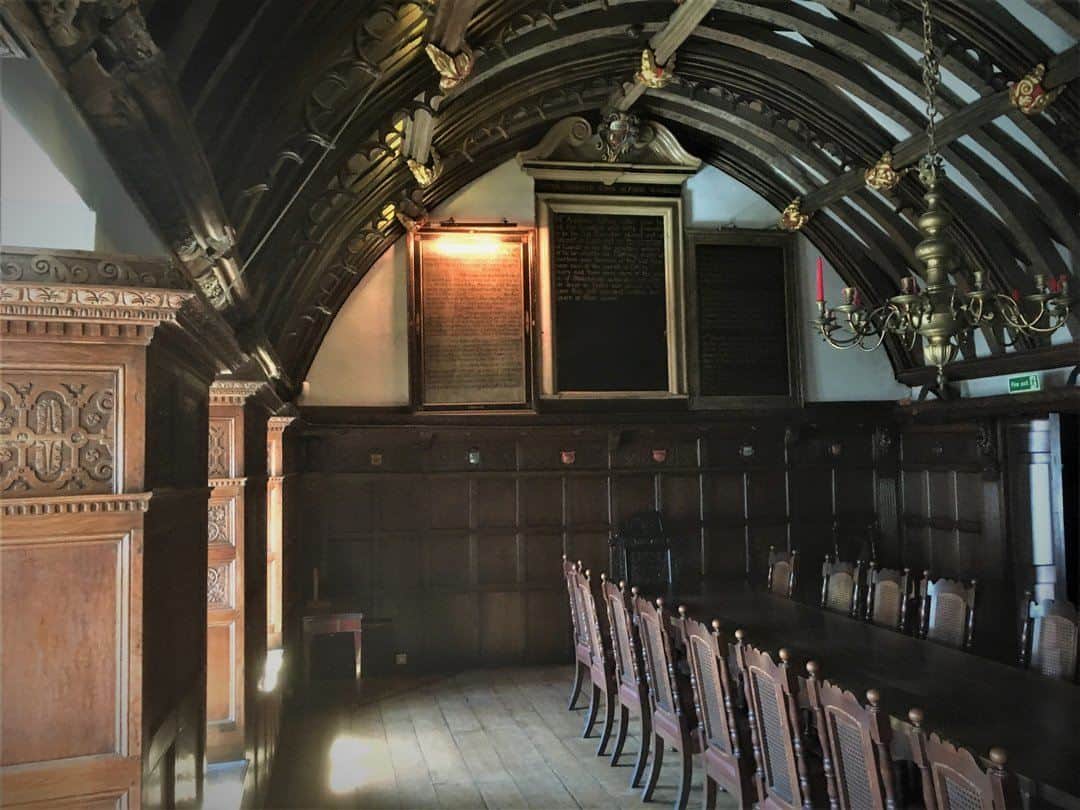 Another perspective of Tuckers Hall – note the decorative 17th century panelling, and chandelier. 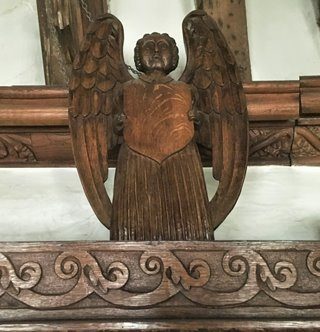 A carved wooden angel looks over the Hall. 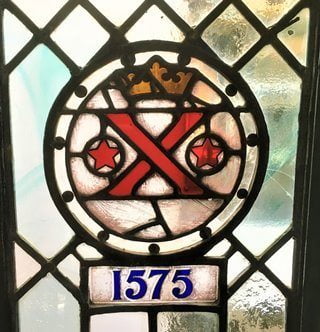 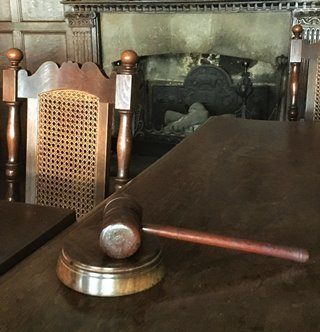 What I can say is that I never felt rushed by my friendly guide (the knowledgeable volunteer lady from downstairs). As I wandered around the hall in a sort of childlike trance, my mind began to brim with all sorts of questions to ask her: were the stained glass windows original for instance? No – it turned out! Yet, the symbols of the woollen cloth industry which they displayed did not look out of place. In fact, the more I asked, the more I found out about the many past structural incarnations this building has had. Most exciting of all was finding out that a number of mysterious biblical wall paintings are hidden behind the panels of the east wall. Existing from the pre-reformation days, no one has quite been able to decipher their meaning. Unfortunately they remain out of view behind the wall (still very exciting and if not a little eerie)

There are also other visible clues of the building’s past to be found. The room next door has a gallery and glass built viewing area. From the walkway, I could clearly make out the outline of the old church window. In effect I was able to visibly peel away the layers of history through these elusive layers of architecture. Also on display, and quite magnificent (I thought), were the wooden fulling stocks. These would have been manually operated to cleanse and thicken the pieces of woollen cloth before being hung on hooks and stretched on frames called ‘tenters’. Alas, and now we all know where the phrase ‘hanging on tenterhooks’ originates from. 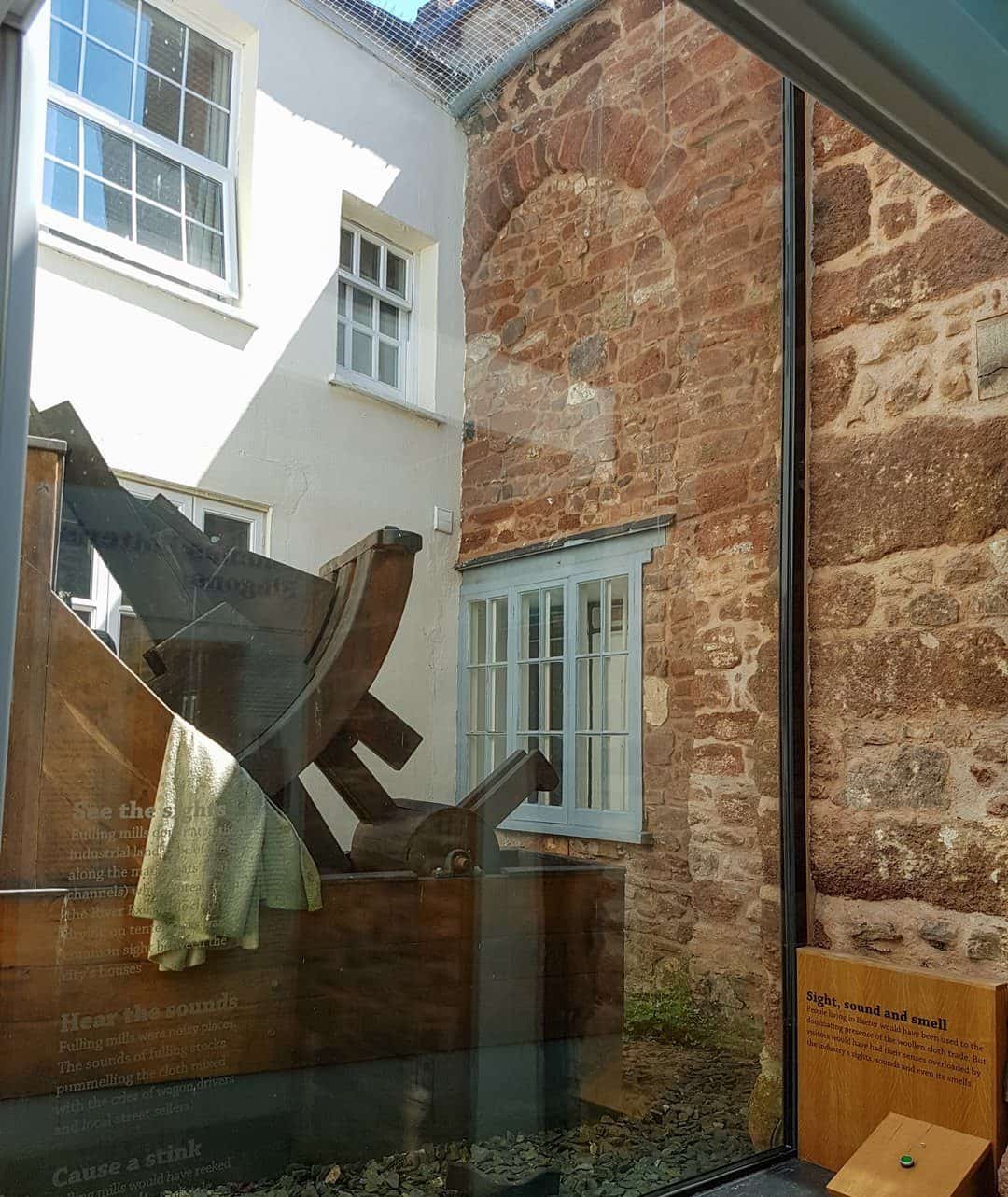 Since opening up this glass viewing area, visitors to Tuckers Hall are able to see the outlines of the old church window and admire the wooden fulling stocks.

Just when I thought I knew everything there was to know about Tuckers Hall, I met a gentleman from the Guild. He told me of the ‘golden tuckers’ of the 18th century: so named because of their wealth. These were the rich fellows who were able to purchase the most expensive items from market. Highly distinguished wearing their green baize aprons with red strings – members of the Guild are still known to dress in these traditional colours today on occasions of parade. Talking of tradition, once every year the Incorporation brings out the silverware and hosts dinner for the London Guild. The hall is once again alive with candlelight and the busy hum of chattering voices.

It is on this rather poignant note that I wish to end on. Because the relentless effort to survive is arguably the greatest success story of all. The longevity of Tuckers Hall is what draws me to it. It is a romantic notion of mine that history can just simply carry on. That is why this place needs to be seen – and so whether young or old, local or ‘passing ship’, come and discover Exeter’s ‘hidden gem’ for yourself. 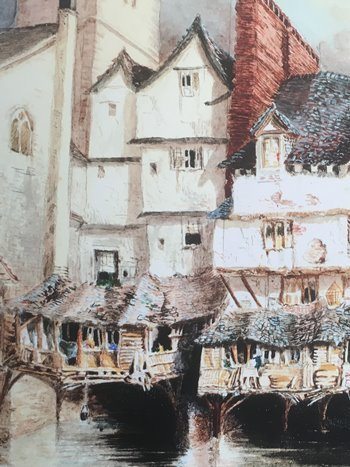 Visiting is free of charge but all donations are welcome to help with the upkeep. 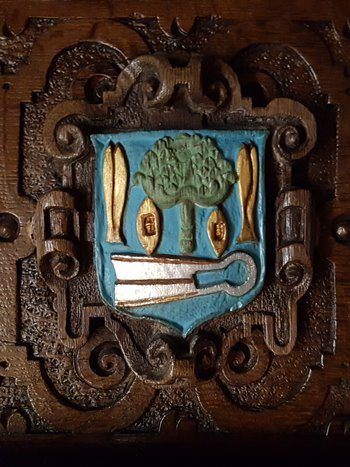