Roman Mosaics across the Empire @ The Getty Villa

Mosaics once decorated luxurious domestic and public buildings across the Roman Empire. Scenes from mythology, daily life, nature, as well as spectacles of the arenas enlivened interior spaces. These images underfoot reflected the cultural ambitions of wealthy patrons. The exhibition Roman Mosaics across the Empire presents the artistry of these mosaics in the contexts of their discovery throughout the Mediterranean region—from the Empire’s center in Italy to the provinces in North Africa, southern Gaul, and Syria. Drawn primarily from the Getty Museum’s collection, the exhibition offers visitors a rare opportunity to experience these splendid objects in all their visual and cultural magnificence.

The exhibition opens to the public on 30 March and ends 12 September in 2016, and can be seen at the Getty Villa of the J. Paul Getty Museum.

“Elaborately designed floors of mosaic tiles were an essential element of luxury living in the Roman Empire, providing a beautiful and sophisticated means of decorating both public buildings and private residences. This exhibition presents the largest and most impressive mosaics in the Museum’s collection, some of which will be on view for the first time. Their rich colors, intricate decorative patterns, and vivid depictions of scenes from mythology and everyday life are almost as fresh today as when they were first made two thousand years ago.”

The exhibition will examine the works in their original contexts, including the locations for which they were made, including private villas, public baths and or churches, and the decorative and narrative functions of their subject matter.

“These important mosaics provide a glimpse into the richly embellished architecture of the ancient Mediterranean world. Displaying these elaborately crafted mosaics will convey to visitors how ancient Romans surrounded themselves in their daily lives with beautiful art and imagery.”

Among the most impressive works on view are sections of an enormous Roman floor mosaic from Italy depicting a bear hunt, discovered in 1901 in a vineyard near Lago di Lucrino in Baiae, just west of Naples. Twenty-three panels of the mosaic (measuring over twenty-eight feet long) were acquired by the Getty Museum in 1971. The fragments on display include the central part of the mosaic, which features hunters capturing bears in a net tied to a pair of trees, and two corner panels decorated with large faces framed by acanthus leaves that resemble personifications of the seasons. Dating to around A.D. 300, the mosaic exemplifies the practice in this period of decorating luxurious villas with large-scale scenes of the hunt or the arena. A reconstructed image created for the exhibition shows the original arrangement of the mosaic panels.

Images of hunting, animal combats, and everyday life were especially popular in Roman mosaics of North Africa. Two mosaics from present-day Tunisia, dating from about AD 100-300, use vibrant colours for finely detailed pictorial scenes. A fragmentary panel discovered in Sousse preserves a violent scene of a lion attacking an onager (a wild ass). It was likely part of a larger scheme, possibly with several pairs of fighting animals, decorating the floor of a wealthy villa. A mosaic on loan from the collection of James Ferrell depicts the coastline of a busy port on a bay in North Africa that reflects the key role the region played in the flourishing trade networks of the Mediterranean.

Works on view from the eastern part of the Roman Empire include an impressive mosaic from the Bath of Apolausis at Antioch (modern-day Antakya, Turkey), which was excavated in 1938. The mosaic, dated to about AD 400, once decorated the floor of the entryway to the central hall of the building. The intricate patterns that frame the central medallions of the mosaic, which depict birds pecking at foliage and a hare eating grapes, reflect the fine construction and lavish decorations of the bath. The exhibition also features an assortment of mosaics from a Syrian church depicting a variety of animals, including a pair of especially striking images of peacocks, each bird surrounded by long vines with clusters of grapes that wind across the surface. In early Christian art and literature, peacocks were considered among the most spectacular creatures on earth and usually took a prominent position in church mosaics. 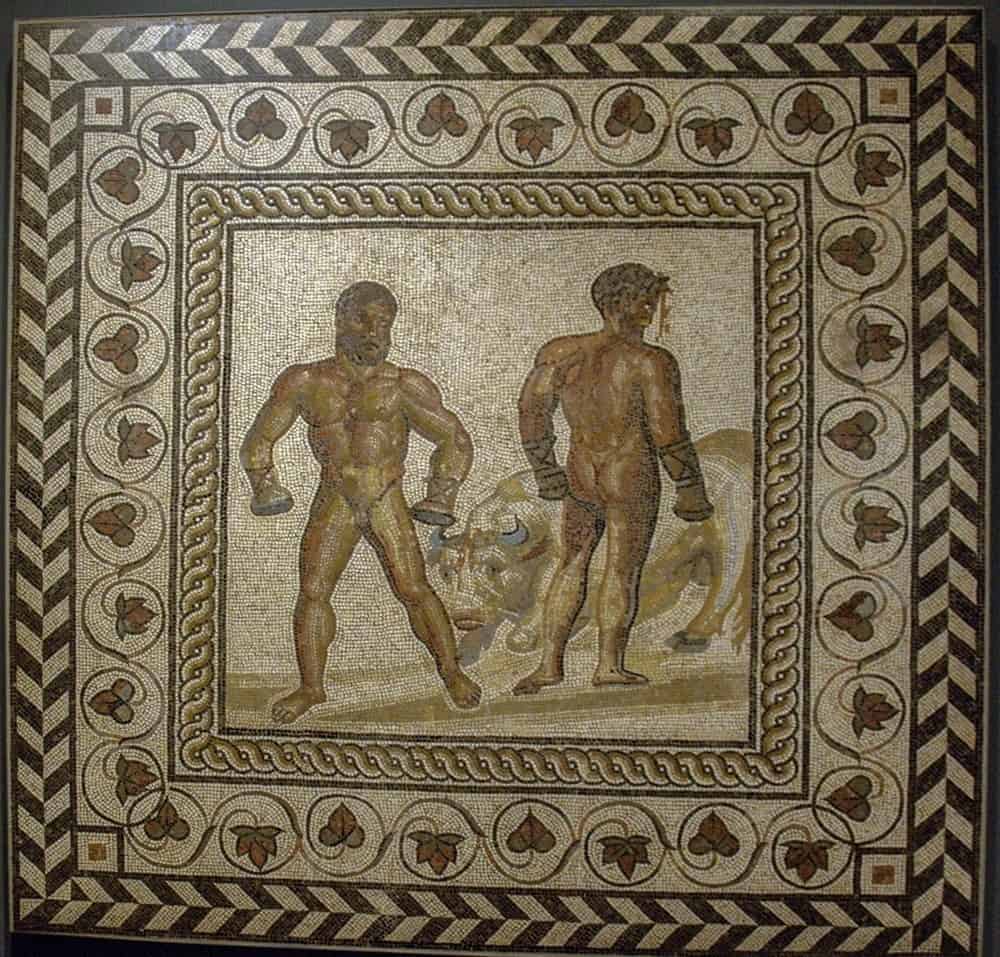 Other mosaics in the exhibition from the province of Gaul (modern-day France) illustrate the great diversity of regional styles found throughout the Roman Empire. Gallo-Roman styles range from designs that isolated individual figures within in a grid-like framework, to compositions that feature colourful central panels with detailed figural scenes. Typical of the first type is a mosaic discovered in 1899 in a villa in Saint-Romain-en-Gal that depicts a scene of Orpheus, the mythical poet and musician, taming animals. Each animal is framed in a pattern of interlocking hexagons surrounding the bust of Orpheus. Two other Gallo-Roman mosaics once decorated floors in adjacent rooms of a villa excavated in 1900 near the modern town of Villelaure. Both are figural compositions inspired by themes from Roman literature. One, on loan from the Los Angeles County Museum of Art, depicts an episode from Ovid’s Metamorphoses. The other represents the boxing match between Dares and Entellus described in Virgil’s Aeneid. New excavations of this same villa took place in 2006, when the local communities of Villelaure, Lauris, and Ansouis, and the Association of Villa Laurus en Luberon, sought to preserve this archaeological site. A museum and workshop for the study of ancient mosaics are now planned for the site.

The exhibition will also highlight a project at the archaeological site of Bulla Regia in present-day Tunisia, North Africa, led by the Getty Conservation Institute (GCI), in collaboration with the Institut National du Patrimoine of Tunisia and World Monuments Fund, which seeks to conserve and maintain mosaics at the site. The project has two main components: the complete conservation of the House of the Hunt, one of the most significant private residences at the site, and a conservation and maintenance plan for the nearly four hundred mosaics excavated throughout the site over the past century. The plan calls for selected mosaics to be stabilized and presented to the public, and for others to be reburied for their protection.

The Bulla Regia project serves as a large-scale example of best practice for in situ conservation, which can be adapted at Roman sites in Tunisia and elsewhere. The project is part of the MOSAIKON Initiative that aims to improve the conservation and management of mosaics in the Mediterranean region, particularly in North Africa and the Middle East. The MOSAIKON Initiative is a partnership between the GCI, the Getty Foundation, the International Centre for the Study of the Preservation and Restoration of Cultural Property, and the International Committee for the Conservation of Mosaics. 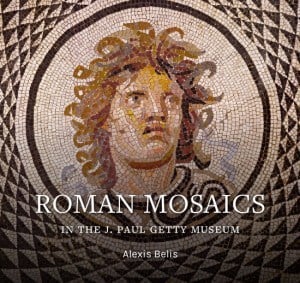 Reflecting its commitment to open content, the Getty will publish an online catalogue on the occasion of this exhibition called Roman Mosaics in the J. Paul Getty Museum. The catalogue is a companion to the Getty’s most recent open content publication, Ancient Terracottas from South Italy and Sicily in the J. Paul Getty Museum. Both titles can be downloaded free of charge.

Roman Mosaics across the Empire is curated by Alexis Belis, assistant curator of antiquities at the J. Paul Getty Museum, who has also authored the catalogue.