Swords of Kingdoms: The Staffordshire Hoard at Sutton Hoo

The much anticipated and postponed exhibition at Sutton Hoo of artefacts from two of the UKs most important archaeological excavations will now take place in 2022 from May to October. The exhibition brings together Anglo Saxon pieces from the recently discovered Staffordshire Hoard with the original finds from the Sutton Hoo burial mounds, believed to be the final resting place of King Raedwald, the 6th century King of East Anglia.

The information on this page was last checked and/or updated on 30 March 2022.

Much of the work in the King’s Ship burial was the work of one craftsman, and this display in Sutton Hoo shows how cloisonné items were made, a technique used in the items found in both excavations.

The exhibition will see a total of 62 original objects on display from the two most remarkable Anglo-Saxon excavations in the world. Although found in a field in Staffordshire, it is believed that much of the Hoard was originally from East Anglia, made in the same 7th century workshops as the finds from Sutton Hoo. 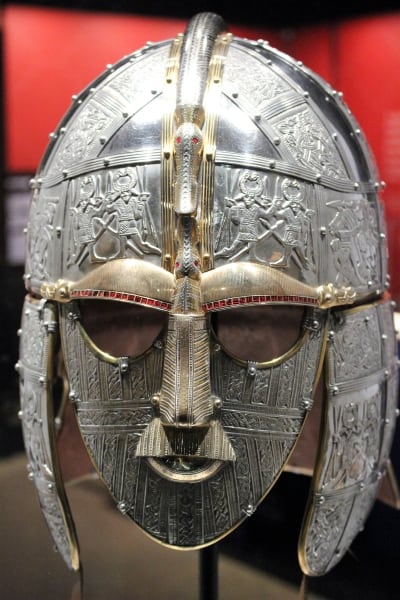 This reconstruction of the helmet found in the King’s burial at Sutton Hoo has intricate detailing. 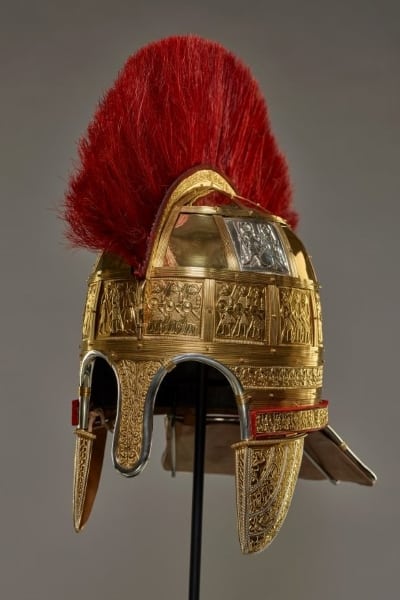 This is a reconstruction of the helmet found as part of the Staffordshire Hoard. Only Anglo-Saxon Kings wore helmets, and only five have ever been found in England. Photograph © staffordshirehoard

Laura Howarth, Archaeology and Engagement Manager at Sutton Hoo said: “Seventy years separates the discoveries of Sutton Hoo and the Staffordshire Hoard, but both have illuminated our understanding of the culture and society of this golden age of Anglo-Saxon England. To be able to display these items from the Staffordshire Hoard alongside original treasures from Mound One here at Sutton Hoo is a dream come true and will mean that for the first time, we’re able to see these objects alongside each other back in the region where we believe they were made 1,400 years ago.” 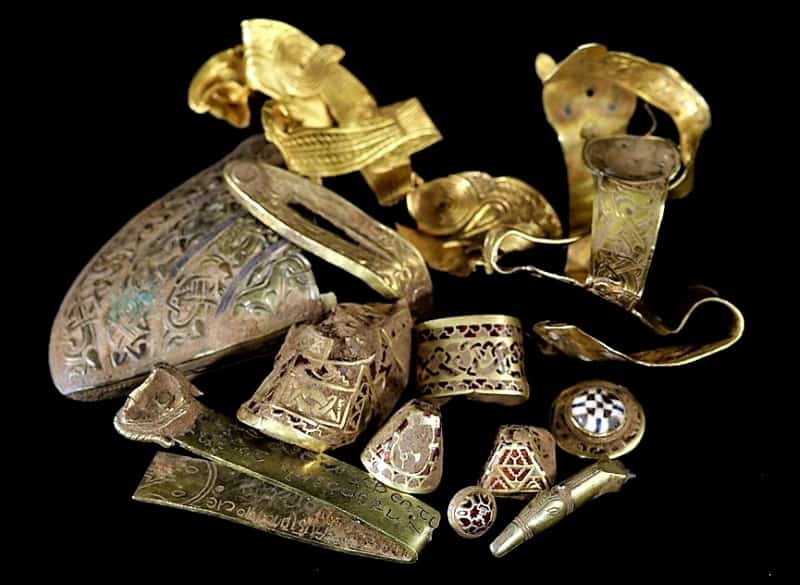 Parts of the hoard including a cheek flap from a helmet, sword fixings, studs, and a band of inscribed gold with a Latin inscription from the Bible. Photograph © Birmingham Museum and Art Gallery

What is the Staffordshire Hoard?

Found in 2009 by a metal detectorist in a farmer’s field in the village of Hammerwich in Staffordshire, the find made headlines around the world for being the largest hoard of Anglo-Saxon gold and silver metalwork ever found, consisting of over 3,500 items. It is unique in that all of the items are military in nature, with three items of religious significance, but no domestic objects at all, as is usually the case with Anglo-Saxon finds. These intricate and valuable pieces were owned by royals, nobility and their warriors from the Kingdom of Mercia and appear to have been intentionally buried. The reason for the burial is unknown, but it occurred during a time of turmoil and change, when Christianity was sweeping across England, and Penda of Mercia was the last of the pagan Kings. 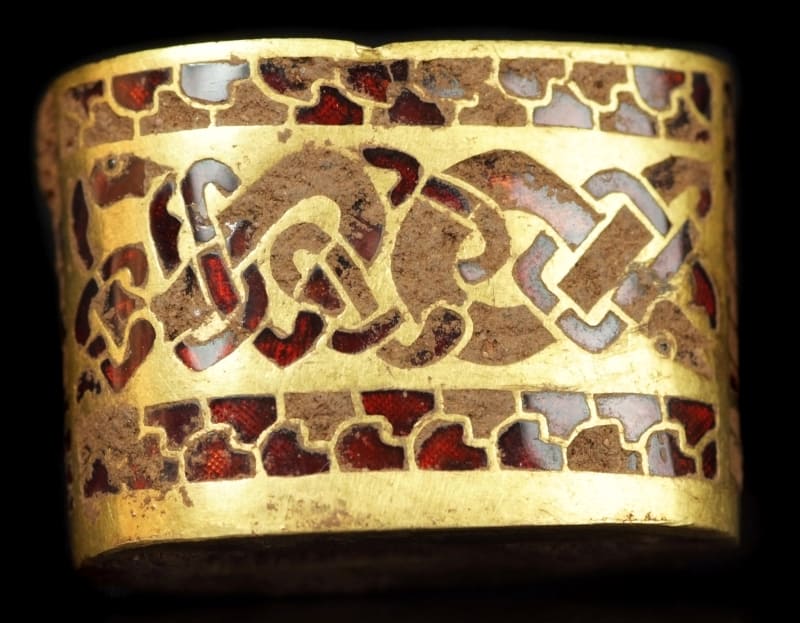 The hilt piece from a sword with an inlaid intertwining pattern. Photograph © Portableantiquities 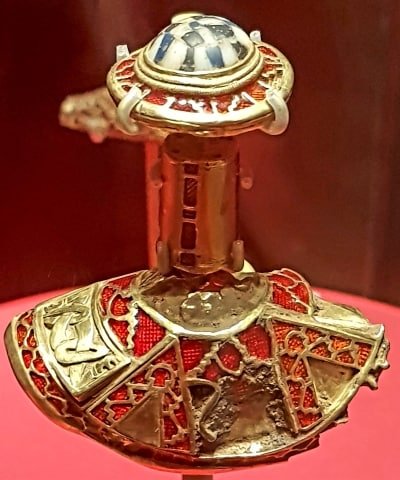 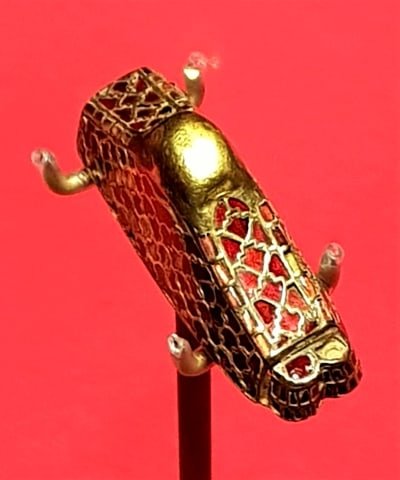 What is Sutton Hoo?

On a small area of the East Anglian coast near the village of Woodbridge, unusual mounds had been part of the landscape for centuries. In 1939, they were excavated at the behest of Mrs Edith Pretty, the landowner, and were found to be astonishing burial sites, including that of King Raedwald, the King of East Anglia, who was buried in a full size ship with exquisite grave goods. These include a shield, sword, silver plates, drinking horns, several cloisonné items and an incredibly intricate helmet, and are very similar in nature to a burial referred to by Bede in the Anglo-Saxon poem of Beowulf.

Other burials in the area include a warrior buried with his horse, the burial of a woman of importance, possibly the queen, and cremated remains, all buried with high status grave goods. The burial ground was in use from the 6th – 7th centuries and its discovery played a huge role in increasing our understanding of the Anglo-Saxon period. Sutton Hoo is one of the most important and must-see Early Medieval Sites in England. 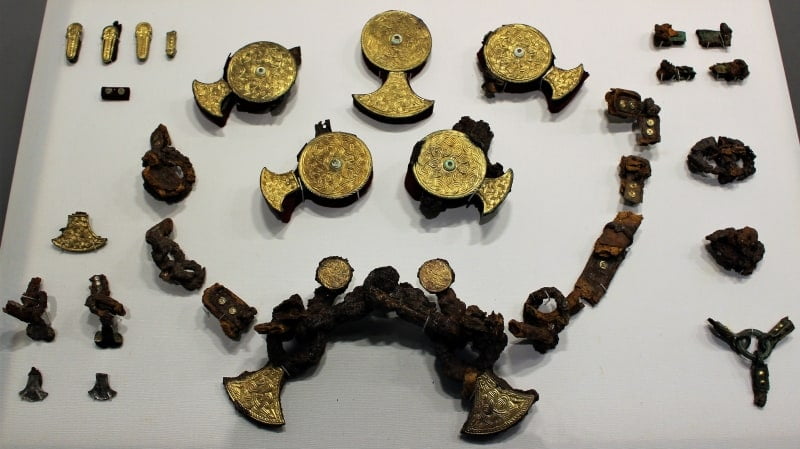 The warrior horseman was buried next to the grave of his horse, with this rare horse harness.

What is in the exhibition?

The exhibition will be held in the Sutton Hoo site, which has recently undergone a huge revamp. Many of the finds from Sutton Hoo were donated by the landowner to the British Museum, but some of these will be returning for the exhibition alongside the Staffordshire Hoard. Visitors will be able to see all of the exhibits in the exhibition hall, as well as visit the new display about Sutton Hoo, which includes a mixture of original pieces and reconstructions. A visit to the site also includes walking trails to the mounds, a visit to Mrs Pretty’s house filled with details about the archaeological excavation, and new for 2020, a viewing tower which overlooks the burial site. 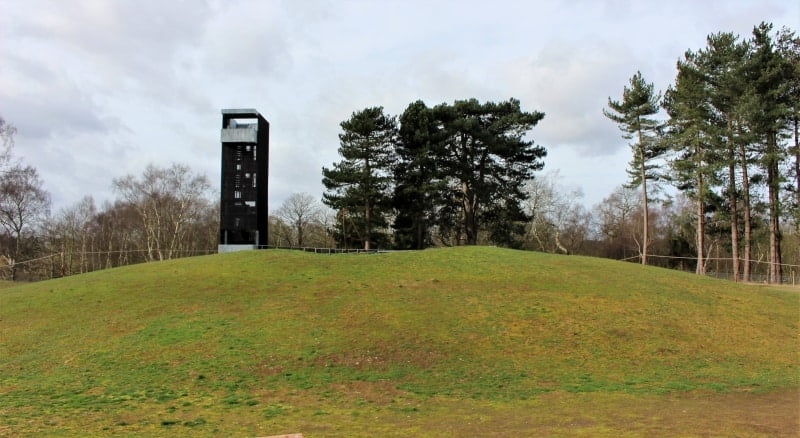 The viewing tower is currently under construction and will enable visitors to look out over the burial mounds at Sutton Hoo.

Visiting Swords of Kingdoms: The Staffordshire Hoard at Sutton Hoo

When is the exhibition?

How to get to Sutton Hoo

The site is clearly signposted from the main road, the A12 from Ipswich, which leads to the B1083 to Sutton. Sat Nav: IP12 3BJ. There is ample free parking on site.