One of the most internationally important collections of coins, engraved gems, and antiquities.

The Cabinet des Médailles is a department within the national library of France; its collections and displays are located in the Richelieu-Louvois library in Paris.

The collection has its origins in the personal collections of the Medieval French kings. King Charles IX preparing for the turmoil of the Wars of Religion in the mid 1500s created a post of ‘special guardian of the Crown’s medals and antiques’. From this time on the collection was never again divided up, and was declared national property after the French Revolution.

History aside, it is the shear quantity of the collection that makes this one of the most important collections of coins and medals anywhere in the world. Today the collection is made up of over 600,000 coins and medals, some 42,000 non-monetary objects such as cameos, intaglios, Greek vases, medieval ivories, and bronzes, sculptures, and over 10,000 documents about the collection. The ancient artefacts come from as far as the Near East, as well as many significant ancient French treasures, such as the Berthouville Treasure and the Treasure of Gourdon.

The Trésor de Gourdon is a hoard of gold objects that date to the end of the 5th or start of the 6th century AD. Soon after 524 AD they were buried near Gourdon in the Saône-et-Loire department of France. They were discovered in 1845 by a shepherd girl, and auctioned in July of 1846 when they were acquired by the state. In all, the hoard is made up of a chalice, a patern and over one hundred gold coins dating from the reigns of Byzantine emperors Leo I (457–474) to Justin I (518–527). 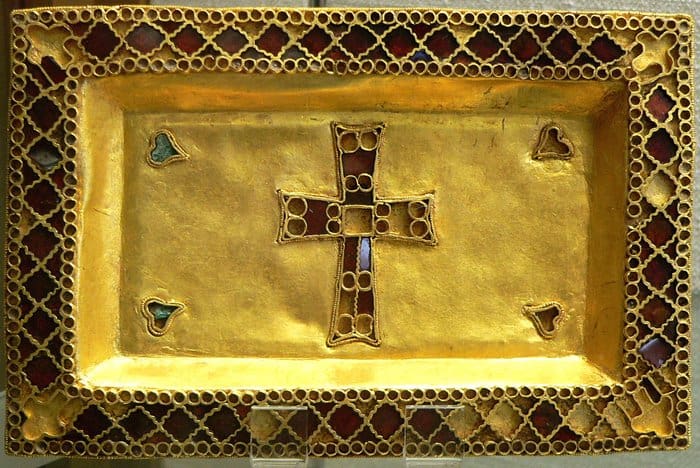 The gold paten, which measures 19.5 cm by 12.5 cm, and 1.6 cm deep, has a border of cloisonné garnets, a central cross also made of garnets and four corner motifs in turquoise. Photograph © Clio20/Wikimedia

The Berthouville treasure is a hoard of Roman silver vessels and statuettes uncovered in a field when it was being ploughed. The cache was discovered in March 1830 near a small hamlet in the Eure department of Normandy. The collection of nearly 90 silver-gilt artefacts was sent to the Getty Institute in California for extensive conservation work, work that lasted four years beginning in December 2010. Some of the pieces are amongst the finest examples of silver metalwork from the Roman era. 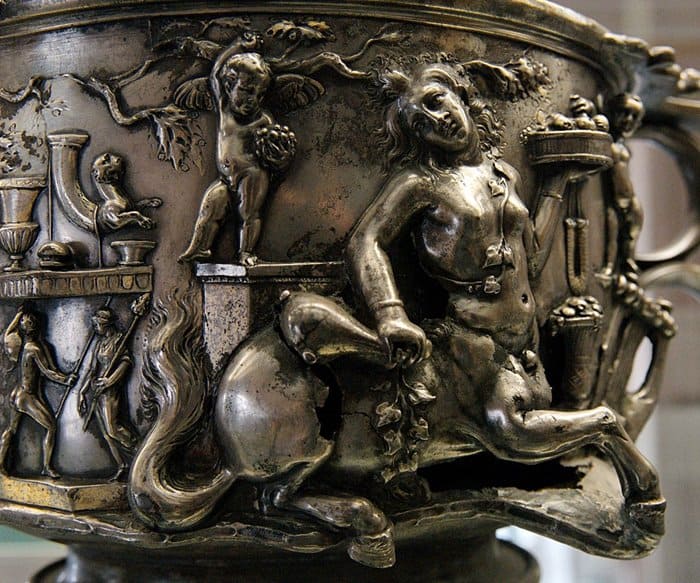 One of the exquisite silver-gilt cups showing centaurs.

Exhibitions in the Cabinet des Médailles

The collections in the department are available for inspection to researchers. They are also available online, see the online catalogue via the link to the official website. A selection of objects have been put on display to show the history of this incredible collection and the various manufacturing techniques used to create the variety of objects.

Objects from the collection are frequently loaned to other museums and institutions for special, temporary exhibitions, for a programme of these see the Library’s Exhibitions Page.

For more suggestions on what to see and where to go in Paris, with more tips and recommendations, see our Paris City Guide.