Also called Fort du Hâ, two towers remain of a fort built at the end of the 100 Years War by Charles VII

Following French victory at the Battle of Castillon of 17 July 1453, widely considered to mark the end of the 100 Years War, the King of France Charles VII ordered the construction in Bordeaux of Fort du Hâ and Château Trompette. Besides Calais, the English had lost all land in France, and the king wanted to protect France against the threat of future attacks. Today all that remains of the ancient fort are two towers joined by a wall. And this is now the site of the Palais de Justice and the École Nationale de la Magistrature. 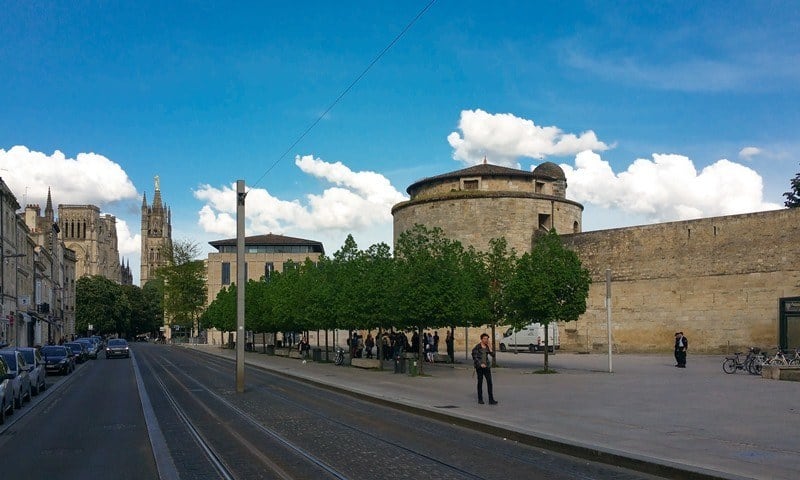 One of the towers of Château du Hâ with the spire of Cathédrale Saint-André in the distance.

Construction started in January 1456, in part using ready hewn stone from the remains of the Roman wall. To begin with the fort served as a garrison for royal troops. In 1470 the forts served as a residence for Charles de Valois, and so became a castle. From then on, until becoming the legal school for the French Judiciary in 1972, the castle served as a place of refuge or a prison.

Tax collectors took refuge here in 1548, as did protestants during the War of Religions in the late 16th century. It first became a prison in 1731. Were it not for the Revolution, the castle would have become a military base again. Instead it remains as a state prison. In 1835 much of the fort is destroyed for the construction of the courthouse. Only the surviving two towers were left standing.

During the German Occupation of France the towers become a prison, for political prisoners and members of the French Resistance. One of the most prominent inmates being Louis, Prince Napoléon, or Napoleon VI as he was the pretender to the Imperial throne of France. Many Jews were interred here, before being sent on to Drancy Camp in Paris and then on to the death camps in east. A plaque at the door reads:

A granite sculpture was installed in 1985, commemorating the people who were imprisoned here during World War 2. The sculpture holds ashes collected from the concentration camps.

The towers are not open to the public.

To get to Château du Hâ: take Line A on the Bordeaux Tramway, at the Palais de Justice stop

Other Sites & Museums to Visit in Bordeaux

Things to do in Bordeaux