The Jardins de la Fontaine in Nîmes are landscaped neo-classical gardens built around the source of the water spring. 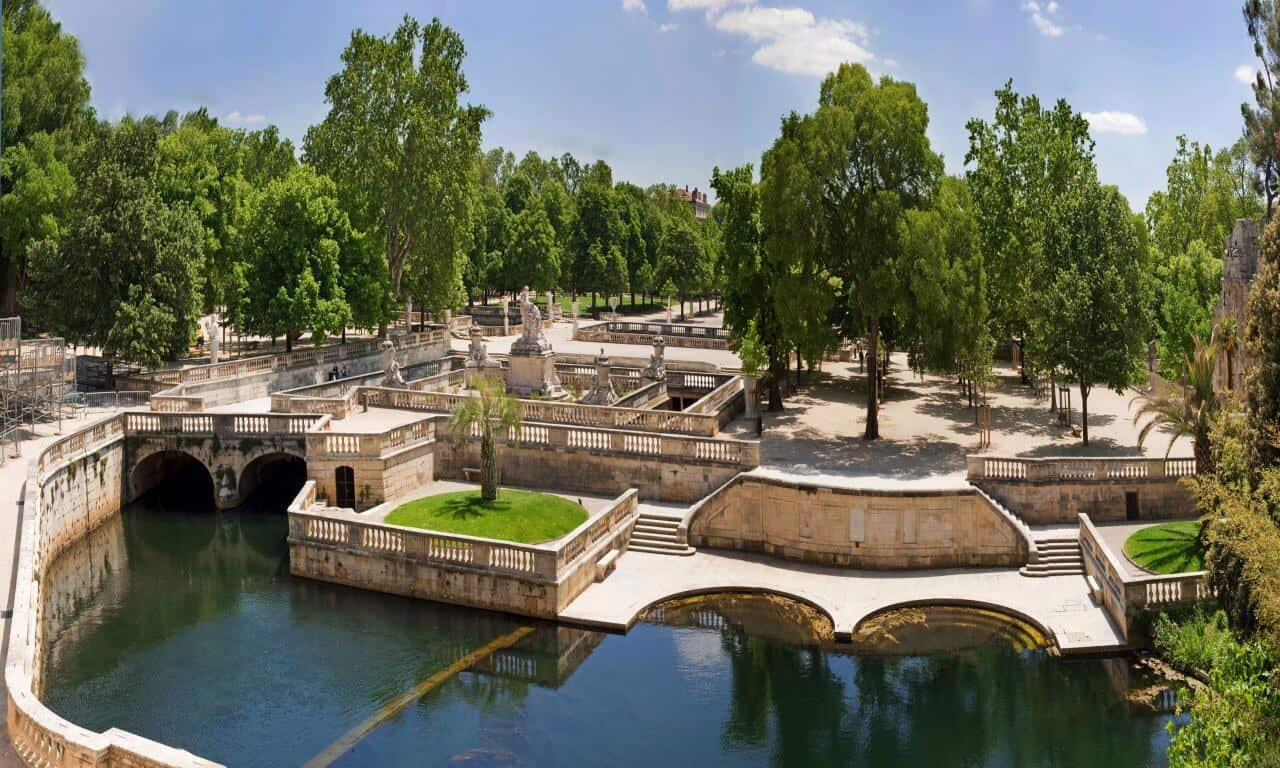 The Jardins de la Fontaine (Gardens of the Fountain) in Nîmes are said to be the first European public garden, and one of its finest. Started in the 1740s at the behest of King Louis XV, the King of France, they were laid out on the site of the Source, the ancient spring which has been described as the birthplace of Nîmes.

Created by Jacques-Philippe Mareschal, the kings military engineer and the Nîmes architect Pierre Dardailhon, the original plan was to provide a landscaped setting for the source, but in the course of the works, the ancient sanctuary and other remains were discovered. Some were left untouched, such as the Temple of Diana, others were covered over, such as the theatre, which remains under a grassy slope.

Others were used as the basis for further developments, such as the basin around the source itself. The shape of the pool, with its semi-circular steps and the channel to the pool with the central island are all based on original Roman features that were discovered during the works. 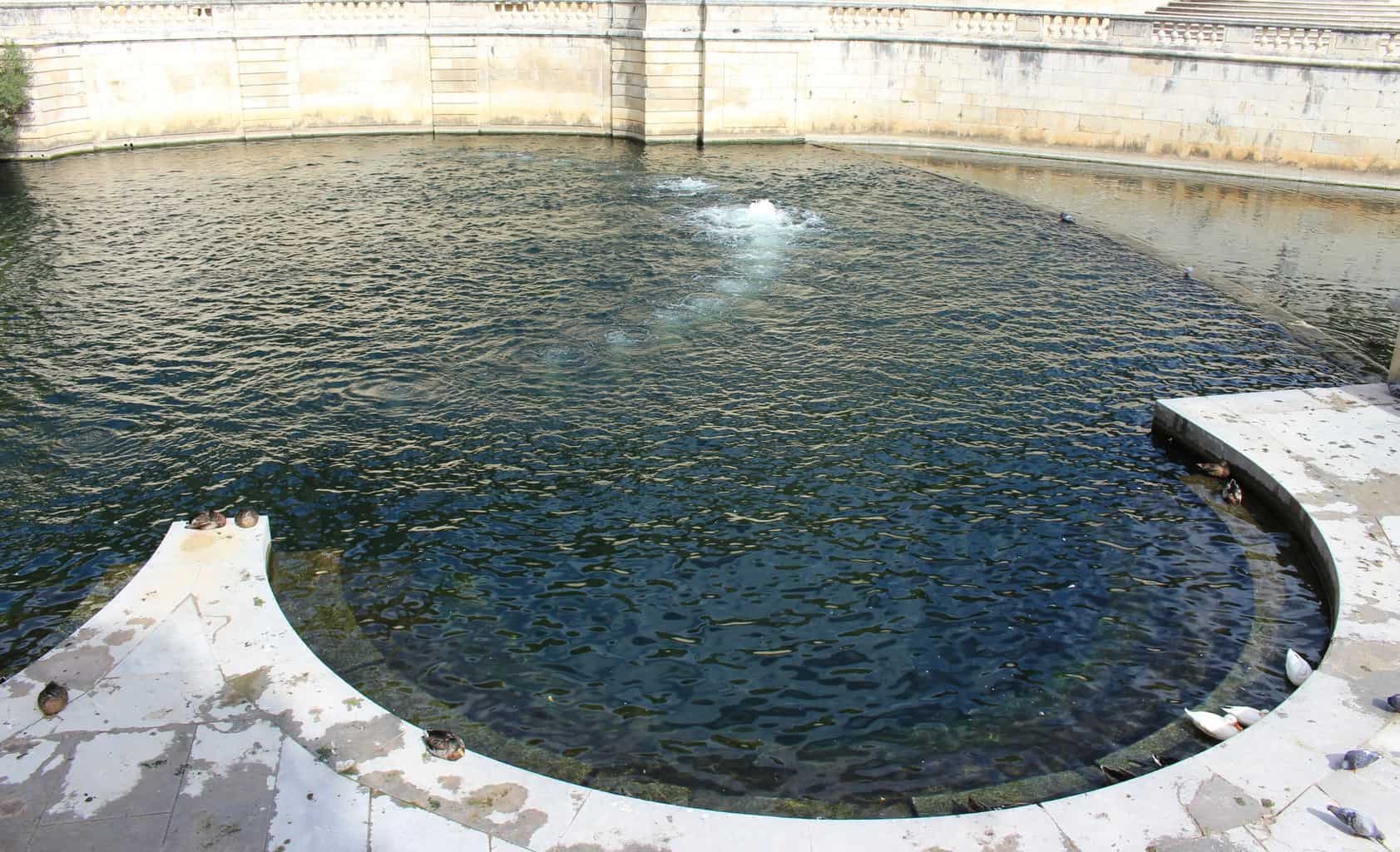 The pool around the source emulates the Roman pool that was here previously. The bubbles are from a modern aeration system keeping the water circulating.

The source had been in use before the Romans arrived in Gaul, with the local Celtic tribe, the Volcae Arecomici worshipping and holding their assemblies in the area. Their god, Nemausus was probably the guardian spirit of the spring, which was venerated and considered to have healing properties.

The tribe surrendered voluntarily to the Romans in 121 BC, and the Romans encouraged the continuation of their beliefs, using their standard tactic of building on existing beliefs and traditions and Romanising them, integrating the indigenous spiritualism with a worship of the Imperial Cult, to colonise the locals to becoming a part of the Roman Empire. 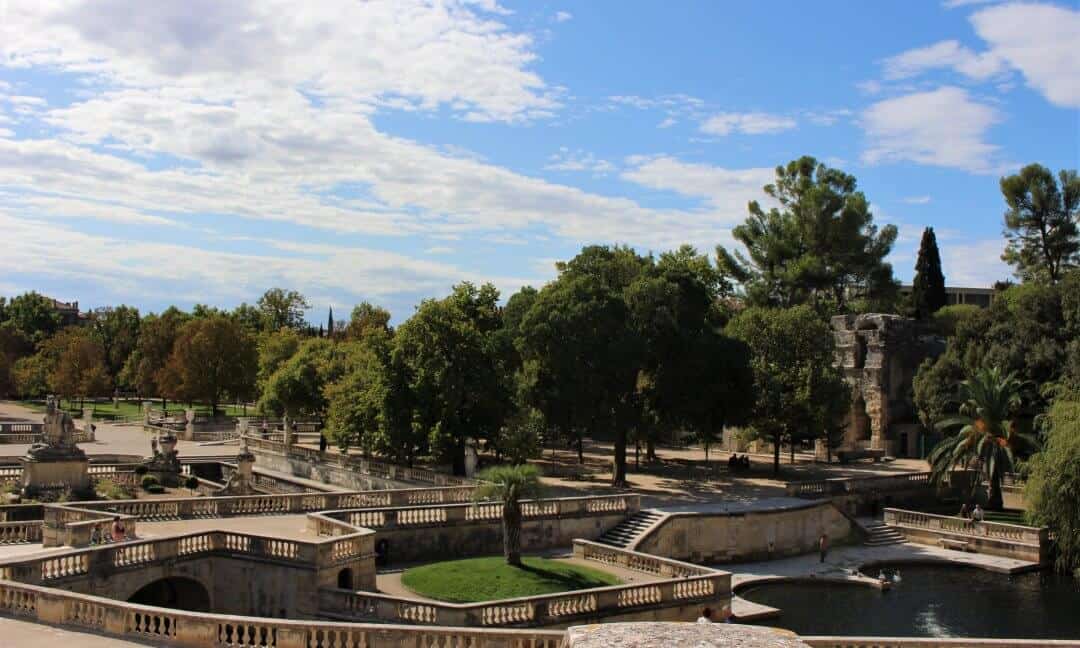 The source and the channel leading to the Nymphaeum.

The Romans built the pool around the source, with a channel that led to a nymphaeum, which is a pool or basin that hosts the sacred source. The central platform held an altar to Augustus, with an Augustun frieze found around the platform’s base. A large number of dedications were found to both Nemausus as well as Emperors.

The roman site was abandoned in the Middle Ages, until it was rediscovered during work on regulating the flow of the spring. The nymphaeum is now decorated with statues, vases, balustrades and other ornamentation, and in the centre is a statue which represents Nîmes. 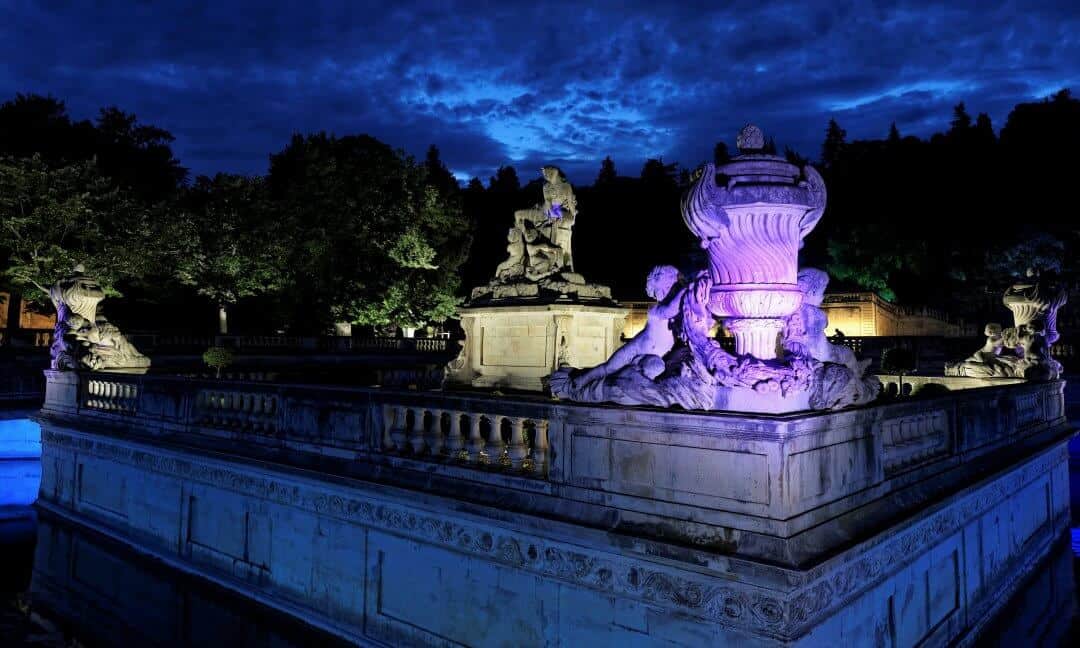 The nymphaeum is illuminated by night to dramatic effect. Photograph © Nîmes Tourisme

Since the gardens were originally created, many additional spaces have been added, and the symmetrical walkways and avenues of trees are now joined by paths through a landscaped Mediterranean garden with pines, oaks, cypresses and other plants. There is a rock garden, grottoes, a Montgolfier pool with aquatic plants and a Mazet garden, with the whole area spanning 15 hectares.

The Jardins also contain two well preserved sets of Roman ruins, the Temple of Diana and the Tour Magne.

The temple of Diana 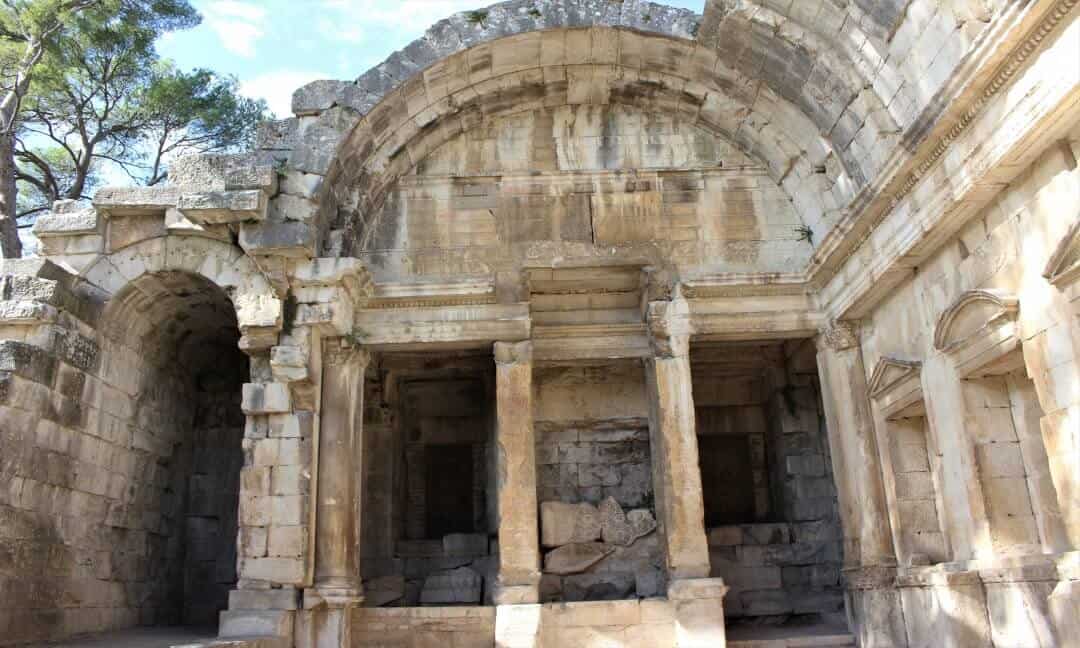 All that remains of the barrel vaulted ceiling and walls.

The rather romantic looking ruins of the nominal Temple of Diana are near the source and were once part of the Roman sanctuary around the spring. Once thought to have been a temple ordered by the Emperor Hadrian for his guardian’s wife, Plotina, it is now widely believed to have been a library, as it has a basilica floor plan and is of a similar design to the Celsus library in Ephesus. The date of construction is unknown, but it is probably Augustun, along with much of the rest of the sanctuary, with its facade rebuilt in the 2nd century AD. 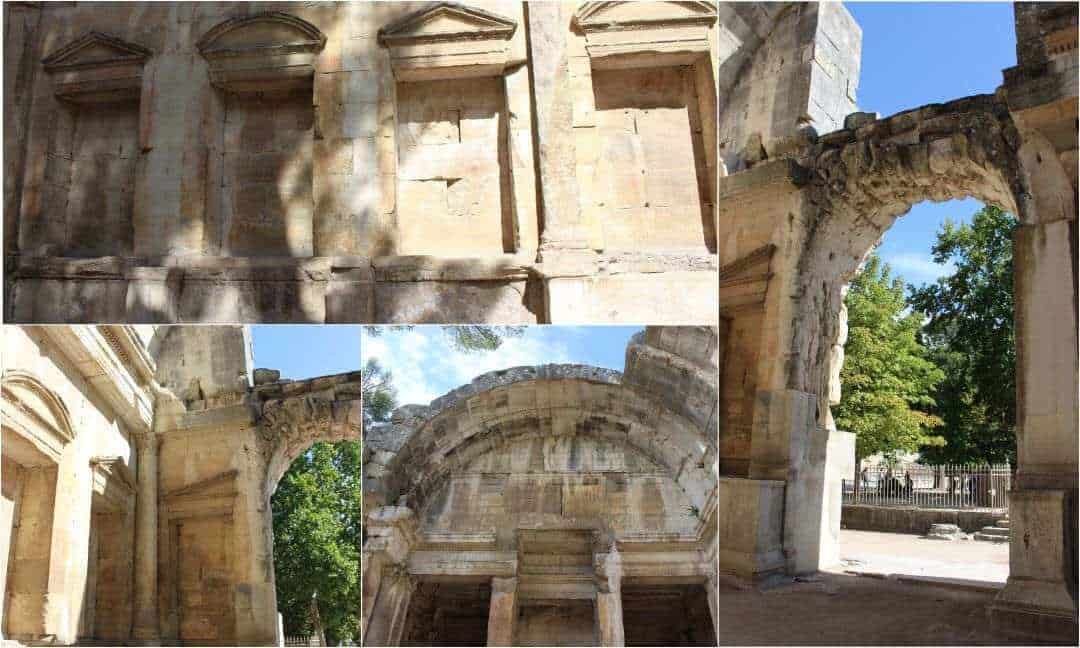 With a large cella, or inner chamber, and a barrel vaulted roof, the walls are inset with 12 niches, which are too small for statues but just the right size for scrolls. The back wall leads into three small extension rooms. The cella is flanked by two lateral corridors which used to lead to a higher floor.

During the Medieval period, from the 10th to the 16th century, the building was used as part of a monastery and became the Chapel of the Fountain for Benedictine monks, who built around the temple and adapted it. They abandonned it during The Wars of Religion. In 1570, the Venetian architect Palladio described it and made several sketches of it, when it was included in his book, The Four Books of Architecture, but in 1600 there was a fire, the roof collapsed, and much of the building was destroyed. Painted by artists such as Hubert Robert in the 18th century, it was made an official Monument Historique in 1840, and has enjoyed popularity with locals and tourists since then. 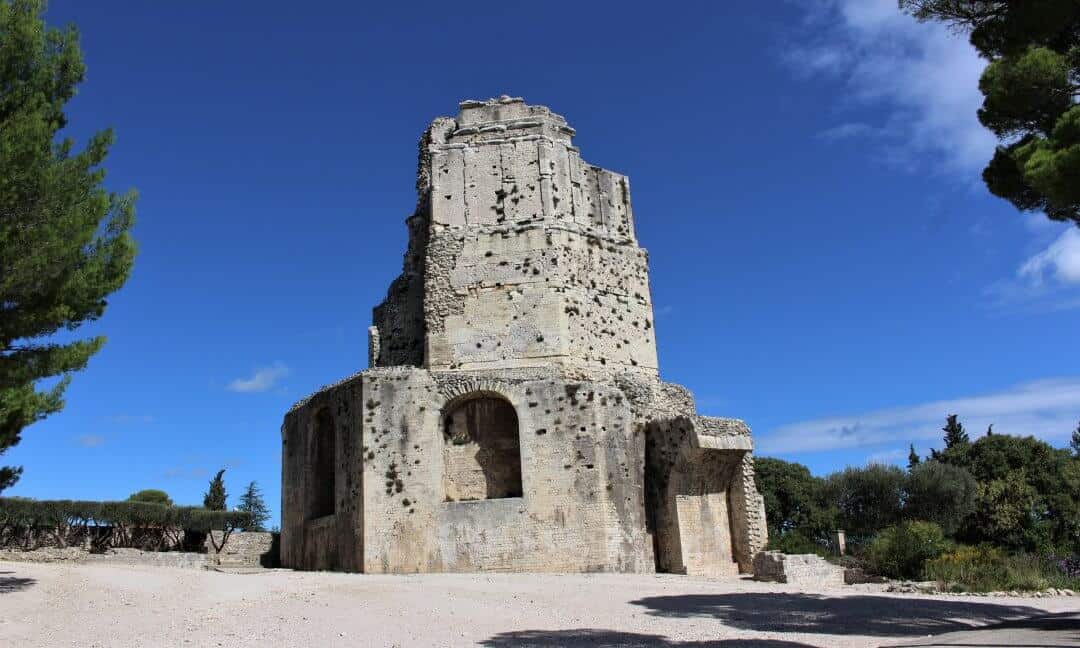 The Tour Magne today is half the height it was at its peak.

The Tour Magne, (Great Tower), is a Gallo-Roman tower that stands at the highest point of the city in the Jardins de la Fontaine. Originally a dry stone, almost cone-shaped tower, built by the local Celtic tribe in the 3rd century BC, it reached about 18m high, and was part of the Iron Age defences of the oppidum, being part of the ramparts of the settlement.

When the Romans conquered the area, they took this structure that already held significance for the locals, and incorporated it into their city walls, adjusting the alignment of the walls to include it. They doubled the height to 36m and built their tower around the existing one, so that it was fully encompassed. It was octagonal in shape and consisted of three storeys, and was accessed by a large ramp held on arches, which now looks like it has been chopped off and most of which has disappeared. 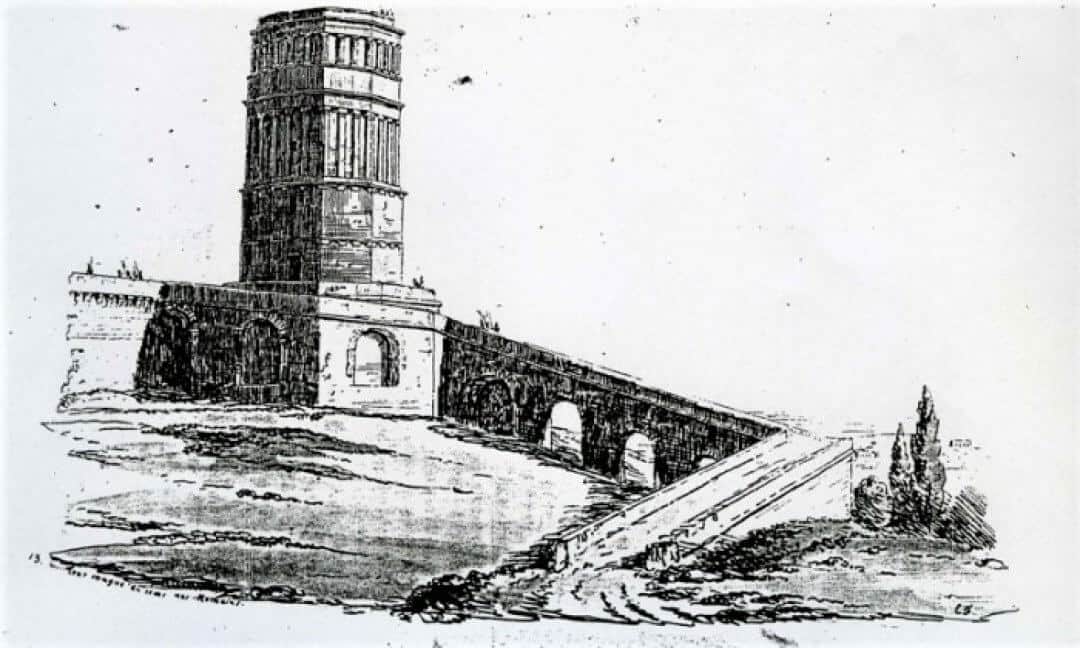 The tower originally had an L-shaped entranceway that led up to a mid-point in the tower.

The tower was in use until the population moved off the higher ground and into what is now the central area of Nîmes.
In the 12th century, a local gardener read the prophecies of Nostradamus and reading that a huge treasure would be found in an ancient building in Nîmes, he got permission from King Henri IV to excavate the tower. With no thought to preservation, he managed to destroy most of the original Iron Age tower inside the Roman one, as well as damaging much of the Roman one, with the top level falling off.

It was later used in defence against the British in the 100 Years War.

In the 1800s, the building was used as part of an optical telegraph system, with a contraption installed at the top to enable semaphore, its high position making it ideal for this purpose as it could be seen from afar. This didn’t last long, as the advent of the telegraph system rendered it obsolete. 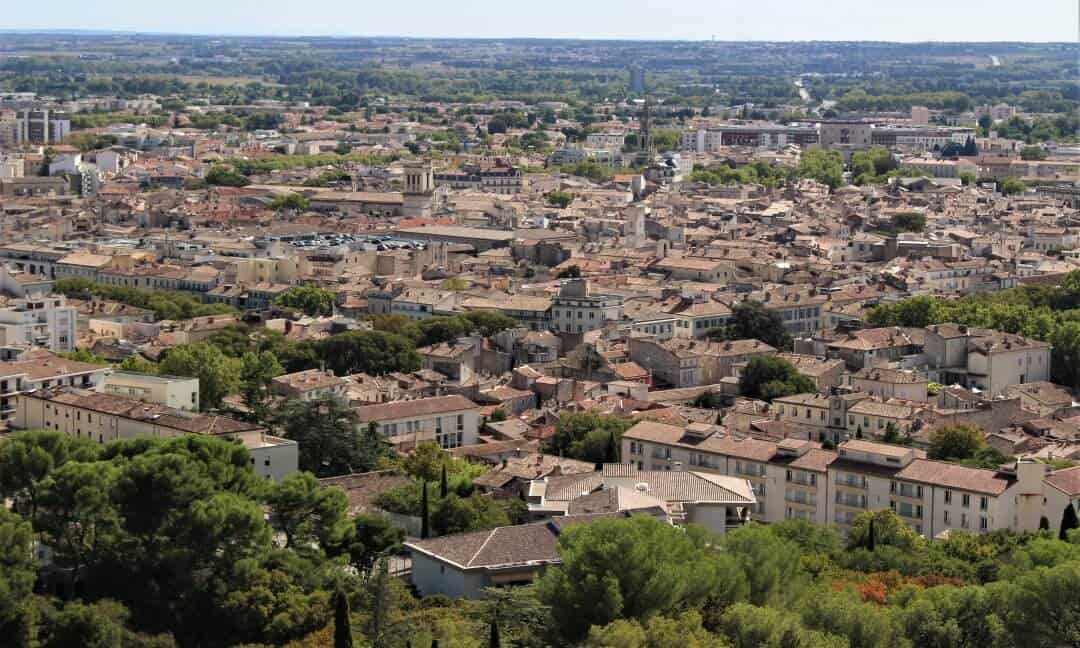 The views from the top of the Tour Magne show what a beautiful city Nîmes is.

Today the tower has a modern tower installed inside it, to enable people to reach the top. With incredible panoramic views over the Jardins de la Fontaine and the city, it is a popular place for tourists.

Visiting The Jardins de le Fontaine and The Temple of Diana