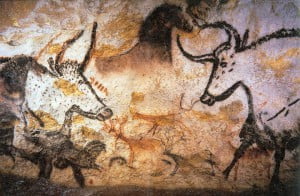 Hall of the bulls, Lascaux.

Lascaux II is a replica of the cave of Lascaux – the most well known Stone Age cave art site in Europe, if not the world. The cave was discovered in September of 1940 by four teenagers, Marcel Ravidat, Jacques Marsal, Georges Agnel, and Simon Coencas, looking for Marcel’s dog Robot. Leading archaeologists of the time very quickly realised the site’s significance, and the cave was then opened to the public in 1948. By 1955 some 1,200 visitors were visiting the site each day. The volume of traffic began to takes its toll on the prehistoric art, because of the damage caused to the prehistoric art by thousands of visitors each week, Lascaux was closed to the public in 1963. The Ministry of Culture embarked on an intensive and expensive project to create a replica. Lascaux II opened to the public in 1983.

The replica contains the main sections of the cave, and provides visitors with an opportunity to see some of the very striking painted panels from Lascaux. Although you are looking at a replica, the accuracy of the replica is measured in millimetres. For anyone with even the slightest interest in prehistory and prehistoric art, Lascaux II is a must.

Lascaux II is open all year round (except for three weeks in January). From 1 October to Easter, you can buy your entry tickets at the ticket office onsite (except Mondays, when the site is closed). From Easter to the end of September Lascaux II is open every day, and timed tickets need to be purchased in the town of Montignac, at the place du cinéma, in the Office de Tourisme, opposite a church. Tickets can now be bought for the following day, or two. In fact in peak seasons, you would be very lucky to be able to buy a ticket for the same day.

Entry is via a guided tour only, which last about 40 minutes. Guided tours are available in French, English, German, Dutch and Spanish.

Where is Lascaux II?

[mappress mapid=”60″ width=”100%”]
The replica is located 200 metres from the entrance of the original Lascaux cave – near the town of Montignac, in the Dordogne Department, and close to many other cave art sites in the area that are open to the public. (The blue marker is the ticket office in the nearby town of Montignac, while the red markers pinpoint various features at the site itself.)

A wonderful documentary by Constance Ryder and produced by La Huit Production in 2013 (French language with English subtitles, this trailer is 2 minutes 50 seconds)

The decorated caves in the Dordogne are popular for school trips.

The ticket office from October to Easter.

Queueing to go into the replica cave.

No waiting in the rain.

The entrance to Lascaux II.

Montignac ticket office, under the arches to the right.

The summer ticket office under the arches.

If you have found this entry interesting or helpful, please share it using the follow social media buttons: