Raised in Paris in October 1833, the Egyptian obelisk was one of two set up at the Luxor Temple by Ramses II.

The ancient Egyptian obelisk that stands on the Place de la Concorde in central Paris, arrived in France on 10 May 1833. And it was on 25 October of that year the obelisk was raised here, watched on by King Louis-Philippe I and an eager crowd. 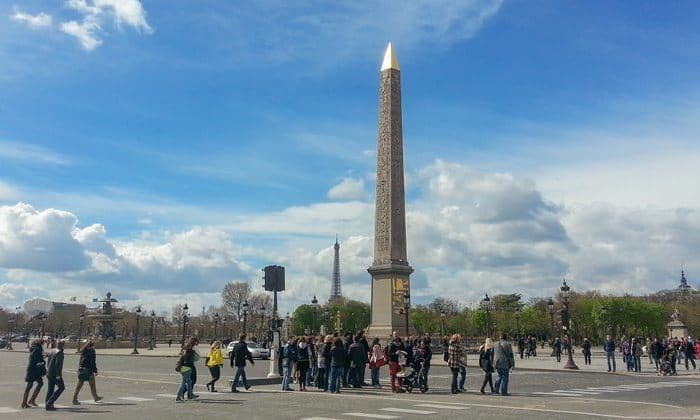 The Place de la Concorde on a sunny spring day.

At the bottom of the Champs Elysées and set in the centre of one of the most well known traffic circles in the world stands an ancient Egyptian obelisk from the Luxor Temple. The so-called Luxor Obelisk is made of red granite, measures 22.5 metres in height and weighs an estimated 227 tonnes. This obelisk and its pair, that still stands in front of the first pylon of the temple in Luxor, were the largest obelisks to have been erected by Ramses II; others were set up at temples in Heliopolis and Tanis. 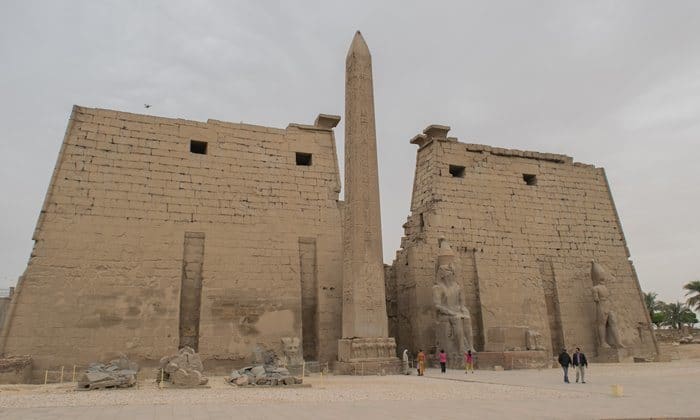 Visible on the pedestal of the obelisk in Luxor are four carved baboons, raising their front paws. Ancient Egyptians observed baboons in nature making such a gesture at dawn, and interpreted this as the animals ‘adoring’ the sun. Both obelisks had identical sculpted pedestals.

The inscriptions on these structural bases, in fact a hymn to the sun, clarify the significance: the baboons are raising their hands, singing and dancing in adoration of the rising sun, which they guide and assist during its passage throughout the day.

As the obelisk is a thin object, there is not much to see from above in the Google map above. Depending on when the satellite image was taken, and of course what the weather conditions were like, you can usually make out the long, thin shadow. But what you can do, click on the yellow figure, drag it to a blue line on the map, and you will then be able to get a ‘street view’ of the obelisk.

First time in Paris? Overwhelmed by the choice of what there is to see and do? History Geek?
Consider our 3-day Itinerary for lovers of Art and History visiting Paris for the first time.

For more suggestions on what to see and where to go in Paris, with more tips and recommendations, see the Paris City Guide. 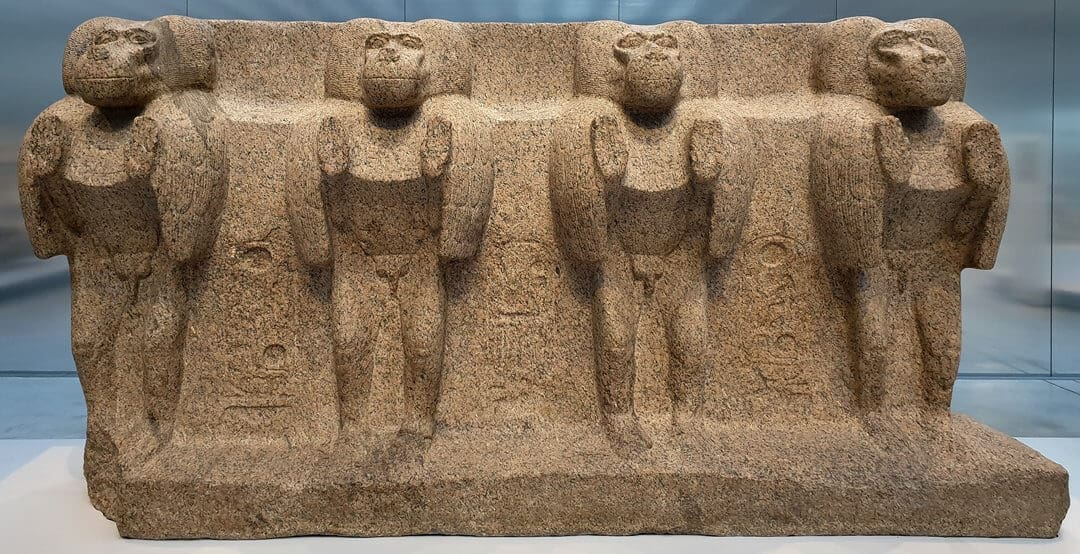 The 5.7 ton pedestal of the obelisk on the Place de la Concorde, now on display in the Louvre-Lens Museum in Lens, Pas-de-Calais in France.

Given the baboons are depicted standing on their hind legs with their arms raised, their genitals are clearly visible. This was thought a bit too much for puritanical Paris in the 1830s, and so the pedestal was given to the Louvre in Paris. With the opening of the Louvre-Lens museum in December 2012, the pink granite pedestal was included in their Galerie du Temps, a collection of 200 objects from the Louvre on medium and long term display in the new museum in the town of Lens (Pas-de-Calais region of France). 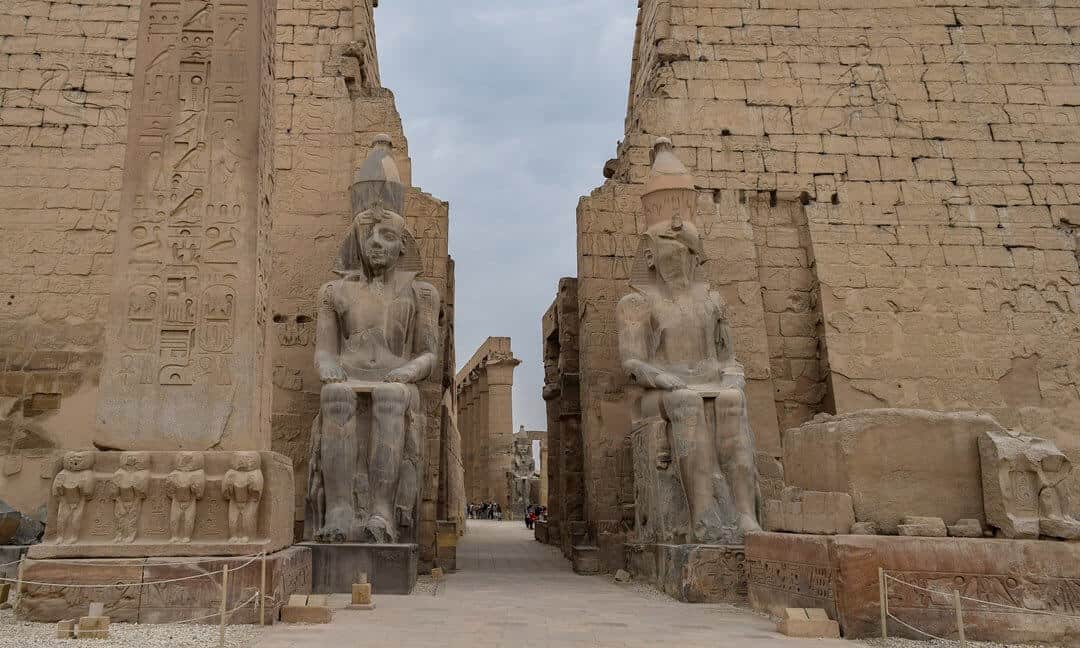 A close up of the bases of the two obelisks at Luxor Temple. The baboons on the remaining pedestal are still well preserved, and the destruction of the pedestal of the removed obelisk is clear. On the far right of the front face of the pedestal the remains of legs of a baboon can be seen.

Initially, both the obelisks from the Luxor Temple were promised to England. Following diplomatic negotiations they were both gifted to France by Pasha Muhammed Ali. In return, King Louis Philippe gave the Pasha a large clock. This clock is still in place in the clock tower of the mosque at the summit of the Citadel of Cairo.

The cost of relocating the obelisk to Paris was 2.5 million Francs, a sum not available for a second operation. Although largely a symbolic gesture, it was President Francois Mitterand who retracted French claims to the obelisk that remains in Luxor. 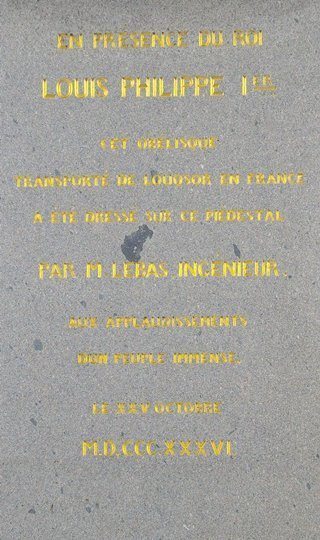 Inscription marking the raising of the Luxor Obelisk in Paris. 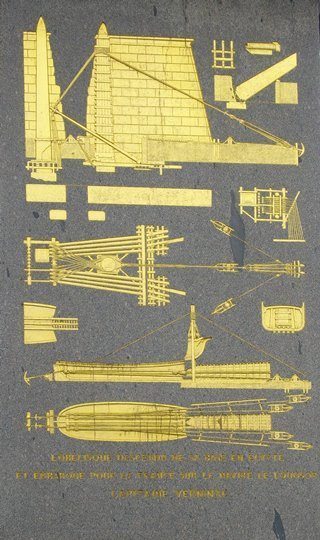 Diagrammatic representation of the lowering of the Obelisk in Luxor. 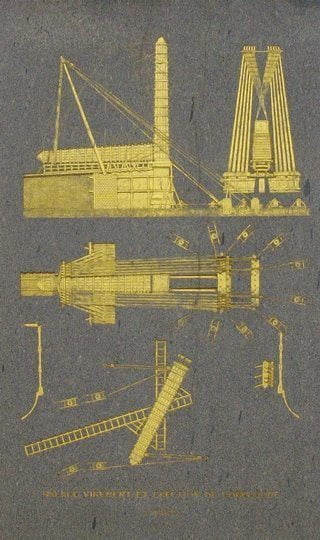 Diagrammatic representation showing the raising of the obelisk in Paris.

The Luxor Obelisk is on what is called the axe historique. This is a line of monuments that starts at the Louvre and extends out westwards to the Arc de Triomphe and the Grand Arche at La Défense. It is also called the Voie Triomphale, the triumphal way. The Place de la Concorde is along this axis. In this photograph, looking up the Allée Centrale of the Jardin de Tuileries, the Luxor Obelisk is perfectly aligned with the Arc de Triomph in the distance. The historical axis srated in the 17th century with the creation of the Champs Élysées, designed to create a view west beyond the central axis of the gardens of the Palace of the Tuileries. In the 1980s François Mitterrand initiated the most recent addition, La Grande Arche de la Fraternité. 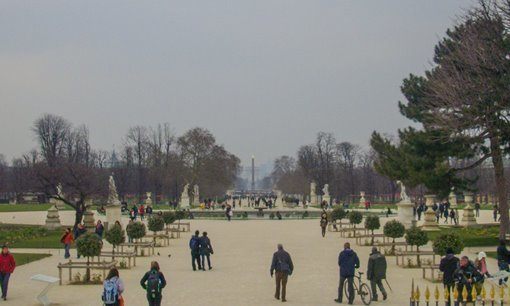