The Musée de Cluny – Musée National du Moyen Âge has one of the most important collections of Medieval artefacts in Europe. Objects come from as far afield as Catalonia and Saxony, England to Sicily. The museum is particularly well known for its collection of tapestries, more specifically the 15th century tapestry cycle called La Dame à la Licorne, often said to be one of the greatest works of art from Medieval Europe. 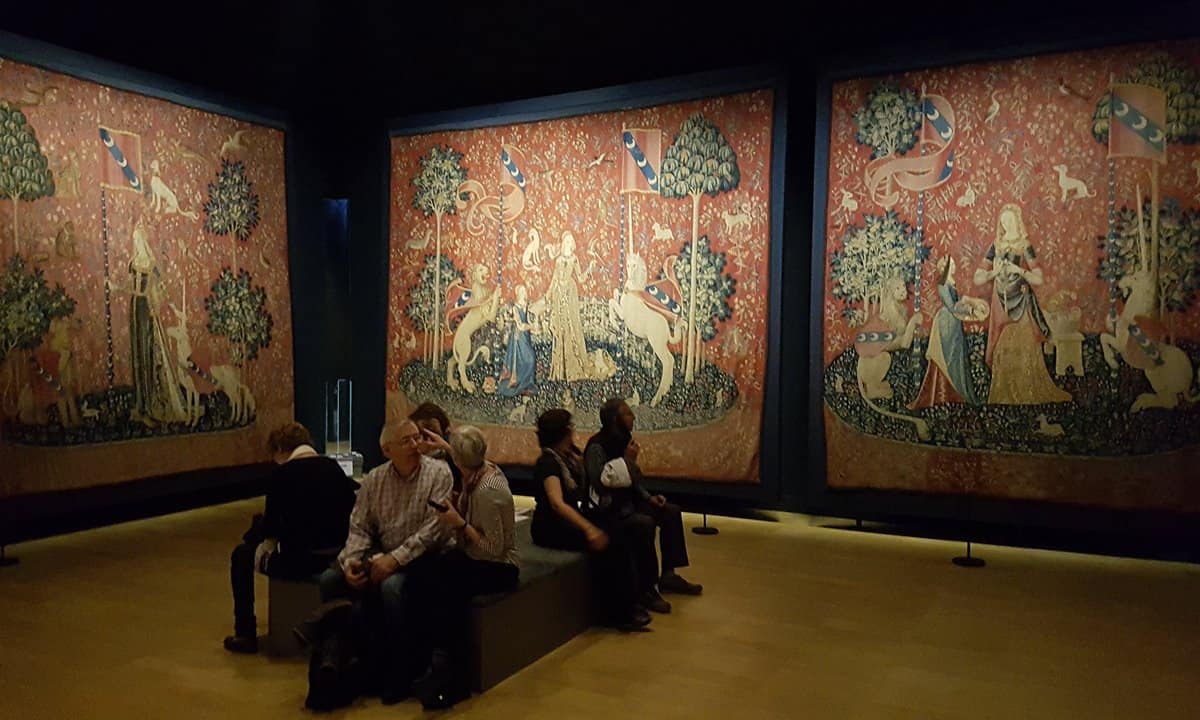 The gallery displaying the ‘Lady and the Unicorn’ series of tapestries.

The Hôtel started out at the beginning of the 1300s as the town house for the abbots of Cluny. The building partially covers the remains of the 3rd century Roman baths, or the Thermes de Cluny.

Where is the National Museum of the Middle Ages?

The museum is located in Paris’s Latin Quarter (5th arrondissement), in what was the Hôtel de Cluny, hence the Musée de Cluny. The building is said to be the most outstanding extant example of civic architecture from Paris’s medieval period. The museum takes up the south east corner of the intersection of Boulevards Saint-Germain and Saint-Michel. The entrance to the museum is located on 28 rue Du Sommerard. You can find the exact location on our Interactive Map of Archaeology and History Points of Interest in France >>

From September 2020 until the beginning of 2022 the museum is closed for substantial renovations. For details about what is being planned, see Cluny 4: A New Museum

Highlights of the Collection on Display in the Cluny Museum

The museum has a number of medieval tapestries in its collection, some of which are on display. The most well known is a series of six tapestries that have been called La Dame à la licorne (The Lady and the Unicorn). Five of the six tapestries each represent one sense: smell, hearing, taste, touch and sight. The sixth tapestry depicts the Lady with the Unicorn. This enigmatic tapestry has been subject to many interpretations since they were found in 1841 in Boussac Castle (in the Creuse Department of France). The generally accepted interpretation is that the sixth tapestry represents the sixth sense of morality or spirituality. 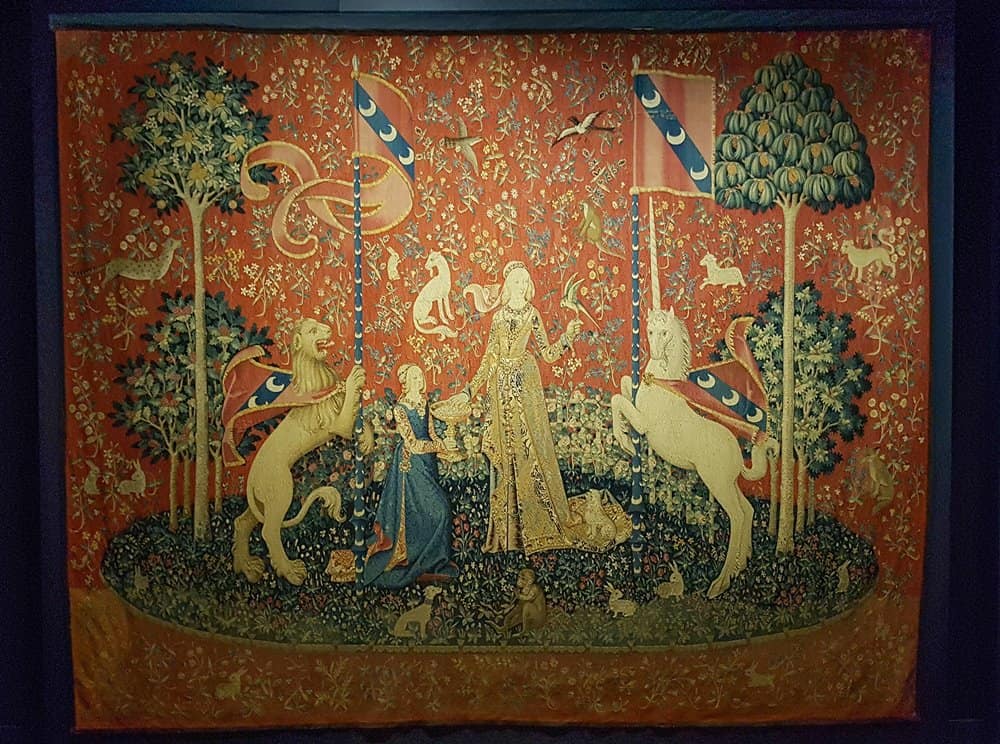 On display in the museum are a number of crosiers. These are the pastoral shafts carried by Bishops and other high ranking officials in most Christian denominations. This particular example comes from the Benedictine Abbey of Saint-Martin that was in the city of Pontoise (Val-d’Oise department in the Île-de-France region). The abbey is now a school run by Oratorians.

The provenance of the crozier is well documented, and is dated to the 13th century. The crosseron is made of ivory thought to come from Sicily, while the shaft is wood from France. The shaft depicts scenes from the daily life of Christ. The crosseron depicts the ‘Adoration of the Magi’, a very common theme in the art of the Nativity of Jesus. Mary is seated with her hands outstretched receiving the gifts of gold, frankincense and myrrh from the magi. Only two of which are depicted here.

Heads of the Kings of Juda from Notre Dame Cathedral

These sculptured heads are part of a collection of sculpted bodies and other elements that have described as one of the most important archaeological finds in Paris of the 20th century.

They were made between 1220 and 1230 using local limestone, for the gallery above the portals on the western façade of the Notre Dame cathedral. This gallery comprised 28 figures that were interpreted in the 18th century as a study in the genealogy of the Kings of France, and probably also the Kings of Juda. As with much of the statuary on the Notre Dame, they were removed during the French Revolution and thought lost and/or destroyed. But they resurfaced again in 1977.

About 300 fragments of sculptures were found during excavations at a building on rue de la Chaussee d’Antin, near the Palais Garnier. Not close to the cathedral for a set of sculptures, the locations is about a 40 minute walk from Notre Dame.

Besides providing insights into Parisian religious sculpture in the early 13th century, the importance of these objects is that they also have retained feint traces of paint. 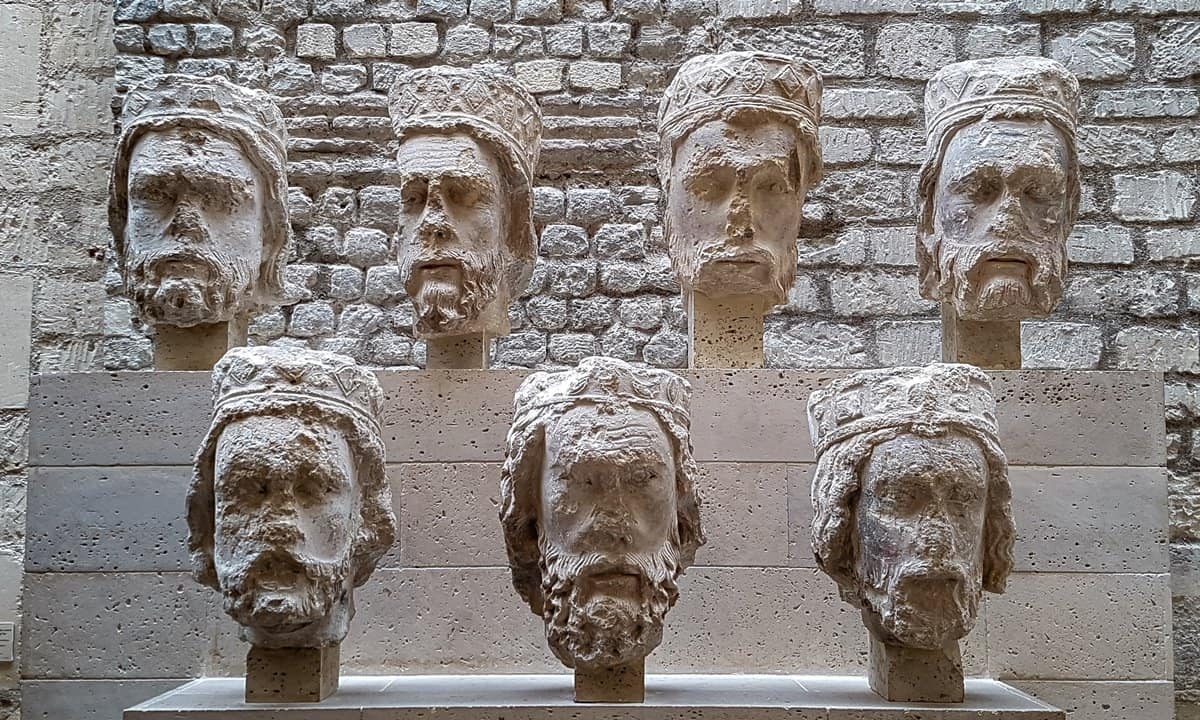