Oradour-sur-Glane: Site of a Nazi Massacre in France

Oradour-sur-Glane is that village in the Limousin region of France where, on 10 June 1944, the Der Führer Regiment of the 2nd Waffen-SS Panzer Division Das Reich unexpectedly entered the small village, rounded up the inhabitants, massacred them, looted the houses and shops and then set fire to the town before continuing on their way north to join other German troops defending their position in Normandy. With minimal intervention, the village has been left as a memorial ever since. 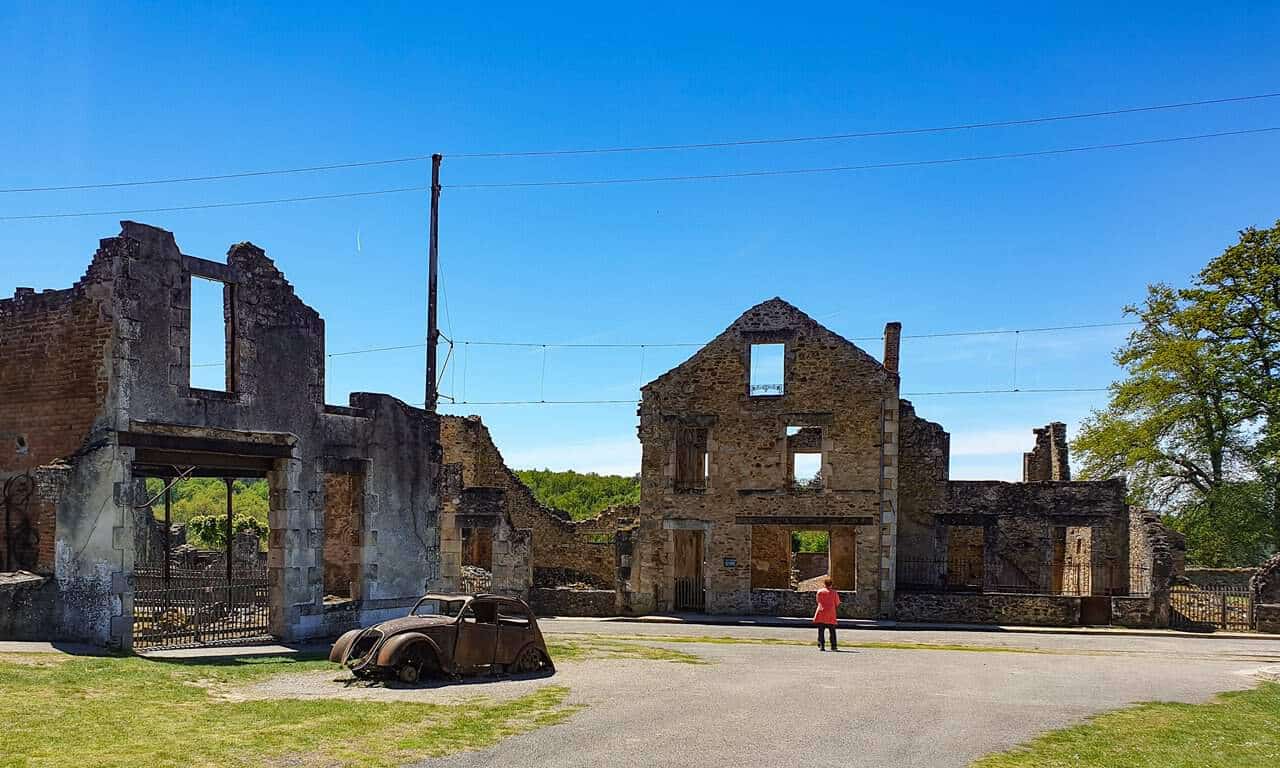 Living in northern France, somewhere between the Somme Battlefields and the D-Day Normandy Beaches, I am quite familiar with many of the World War I and II memorials that attract tens of thousands of visitors each year. But, I have never visited the memorial site of Oradour-sur-Glane, or anything like it. Actually, I was not sure I wanted to visit as I thought from the various accounts I had heard that it sounded rather macabre. While I could understand the intentions behind leaving the village as it was found on 11 June 1944, the idea of walking along those streets where men had been shot and burned on the side-walks seemed a bit mawkish.

There is, however, nothing mawkish about the memorial site at all. Without knowing what happened here, walking down the streets, one that still has the tramway track in it, you could be forgiven for thinking this was just another deserted, old village. Besides evidence of efforts to stabilise the ruins of the buildings, a few signs to indicate significant landmarks (such as places of execution), there really is nothing to see that in any way hints at the atrocities took place here 69 years ago.

And yet there is everything to take in. 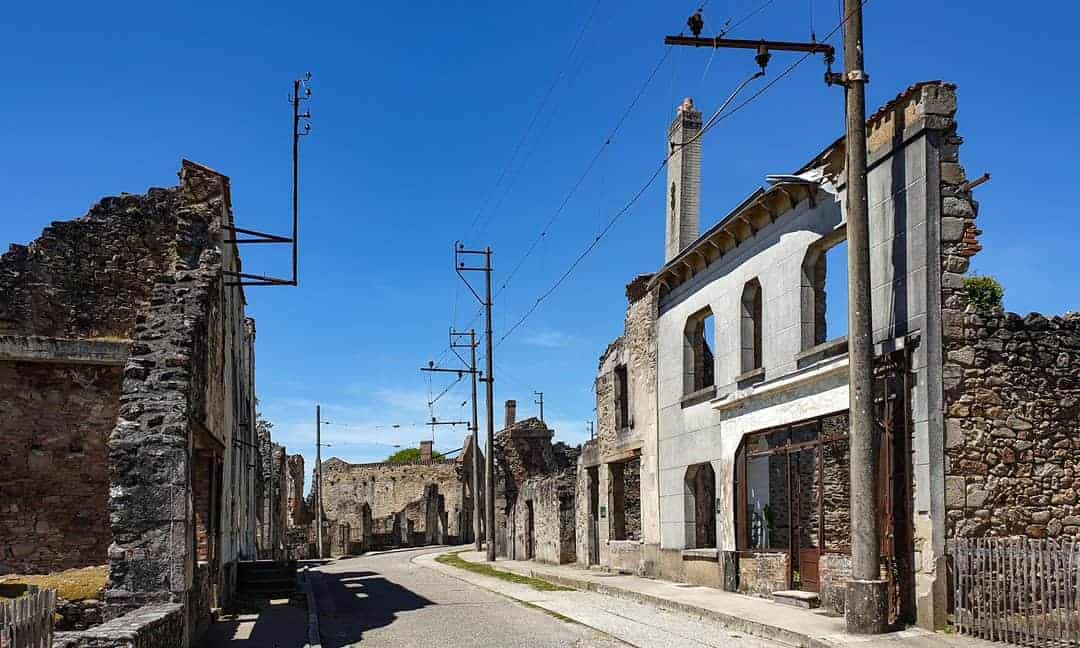 The tram tracks are still embedded in the road, and the overhead cables still in place, running through a street in Oradour-sur-Glane.

Walking around the village you will see the words Souviens-Toi : Remember! often; they are inscribed on plaques dotted about the village. As familiar as I am with the memorials near where I live, and having researched the fate of collections of African artefacts in the museums of Berlin during WW II, I was under the impression I was doing my fair share of ‘remembering’ before I visited Oradour-sur-Glane. But what is it we remember?

For the most part, those of us from an Anglo-American background tend to remember the sacrifice that the Allied soldiers made; how many thousands of men were killed. After visiting the various cemeteries we are all struck by how young these men were. When it comes to the two World Wars, it is the many cemeteries containing thousands upon thousands of brave young men and memorials to them that we tend to remember. Perhaps we visit a few trenches, but on the whole it is the cemeteries we visit, the memorials to the dead we lay wreaths at. We remember our forefathers’ ultimate sacrifice.

Sure, most of us have seen black and white images of French villages and farmsteads that got caught in the crossfire. But these usually provide backdrops to the various battles of the two wars. What visitors to Oradour-sur-Glane are confronted with are the physical manifestations of horrific acts of SS soldiers that led to the decimation of an entire village whose population was at 1,574 in 1936. What happened at Oradour may not have been an everyday occurrence during the war, in fact why it happened at all is still the subject of much debate. We do not know why this particular German regiment did what it did; they were not ordered to carry out the massacre, the village was not known for being a hotbed of the French resistance.

What this memorial shows, for me at least, is that we do not get to fully appreciate is how the French (and this applies to other occupied countries as well) suffered under German occupation, often in extremely brutal ways. And that is what those brave young Allied men were fighting for, what many thousands died for. And why a visit to the memorial site of Oradour-sur-Glane is a must.

Waht Happened at Oradour-sur-Glane? A summary of events of 10 June 1944

At about 14h00 the SS troops arrived and surrounded the village. The inhabitants were ordered to go to the fairground (champ de foie). At about 15h30 the men were separated from the women and children. The men were divided into groups and sent to different points around the village where they would be executed. The women and children were sent to the church. An explosion was heard at 16h00, and then the machine guns opened fire and killed the men. The bodies were then ignited. Inside the church the soldiers lit of a box which produced smoke. In panic the women rushed to the door where they were confronted by the SS firing machine guns. Those that survived retreated back into the church where they perished in the fire along with all the children. Only one woman survived this barbaric act.

When the atrocity was discovered on the morning of 11 June, witnesses describe finding the smouldering ruins with remains of bodies in the streets, in the church and in some of the buildings. The streets were cleared but the insides of the buildings were left undisturbed. A new village was built nearby.

There was a growing concern amongst guardians of Oradour-sur-Glane that the site itself could not tell the story of the massacre of June 1944. And so in 1989 the body representing the families of those killed and the various administrative bodies responsible for the town presented François Mitterand, then President of France, with a proposal.

On 12 May 1999 the centre opened its doors to the public, which was later (16 July) inaugurated President Jacques Chirac.

Now, during times when the centre is open, it is the entry point through which visitors to Oradour-sur-Glane access the memorial site. Entry to the ruined town is still free, but for an additional fee visitors can tour an informative permanent display that sets the historical scene and tells the story of the massacre of 10 June. This is an optional addition, visitors are free to visit the ruined town without the permanent exhibitions, and without charge.

The displays are very thorough, and well illustrated throughout. A striking use of colour in the displays contrasts the rise of the Third Reich and the occupation of France with an image of what life was like in the village in the years and days before 10 June 1944. A short film attempts to reconstruct the events, as far as they are known, of the fateful day. A final display deals with the aftermath.

As a visual exhibition an hour, an hour and a half would give most a very good introduction to the story of Oradour-sur-Glane. 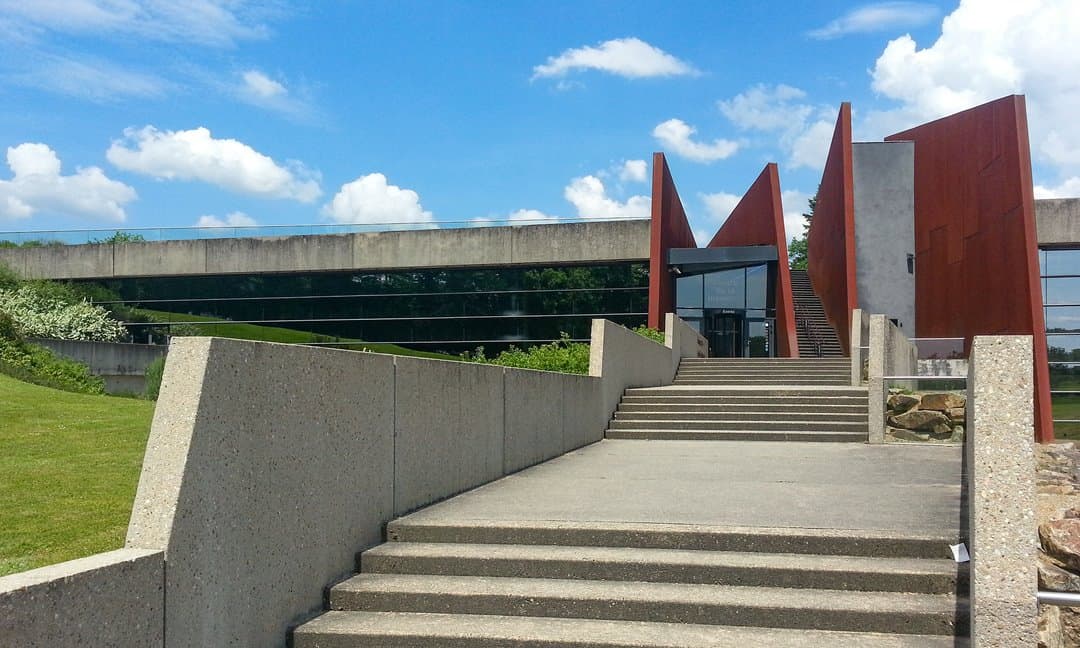 Entrance from the car park to the Centre de La Mémoire, and the ruined village of Oradour-sur-Glane.

Opening Hours
From 1 February to 15 December, inclusive, the Centre is open seven days a week.

Photography is not allowed, hence none used to accompany this piece.

Visiting the Ruined Village of Oradour-sur-Glane

Access to the memorial site is possible throughout the year. When the Centre de la Mémoire is open, the only access is through that building. When it is closed, either after hours or from 16 December to 31 January, two gates allow access to the ruined village.

Ticket Prices
Entry to the ruined village is free of charge. There is an entry fee for the Centre de la Mémoire (see above).

Oradour-sur-Glane in the News: