La Grotte du Pech Merle is one of the most striking Ice Age cave art sites still open to the public. Some of the painted panels really are quite breath taking. It is a large cave, with over two kilometres of underground tunnels and caverns. And the geology of of this cave system is every bit as interesting as the prehistoric paintings. Only about a third of the cave is now shown to the public on a guided tour that lasts about an hour. The Centre de Préhistoire du Pech Merle comprises both the cave and the Musée Amédée Lemozi.

The information on this page was last checked and/or updated on 20 May 2021. 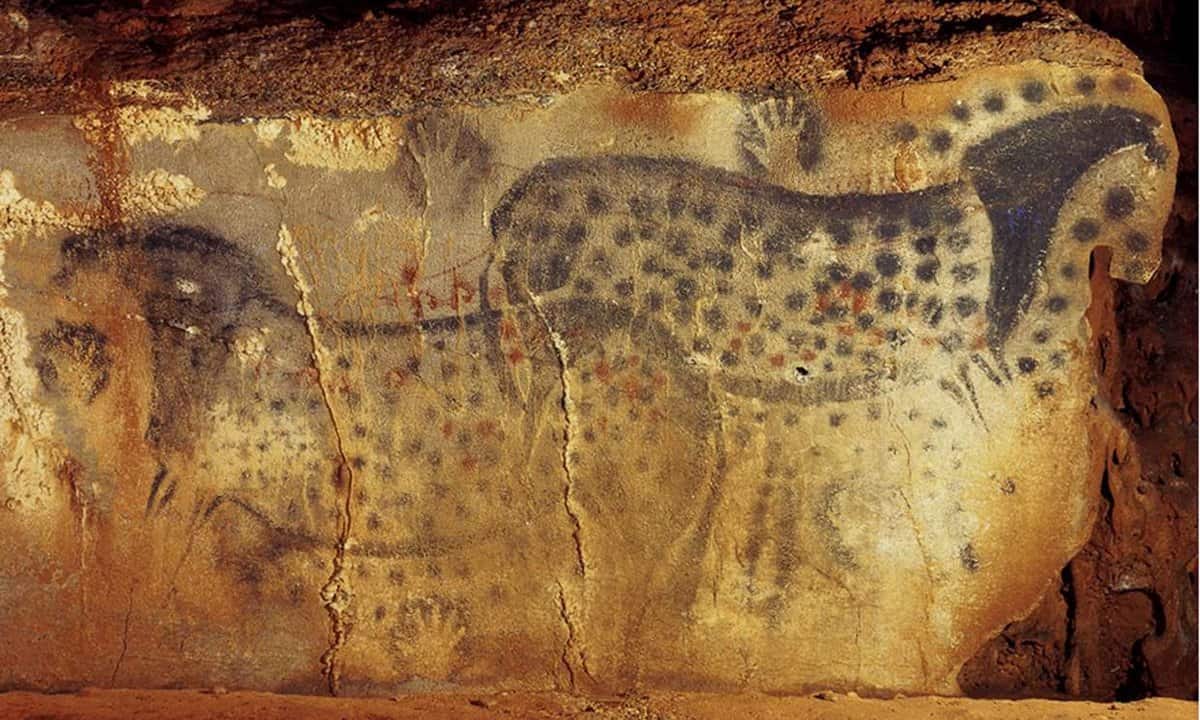 The spotted horses of Pech Merle. Note how the shape of the rock resembles a horse’s head.

Pech Merle was discovered by two young boys in 1922. They were encouraged to explore the caves in the area by the local priest. It was not until 1926, however, that the cave was opened to the public.

The prehistoric paintings in this cave are spectacular. The most well-known panel depicts two black horses painted back to back, with a series of black dots that cover and surround the animals’ bodies. The body of one of the horses is painted on the rock surface in such a way that the prehistoric artist used a natural feature on the rock face to suggest the horse’s head.

Since the discovery of this cave in 1922 archaeological research on the paintings here, including how they were painted, what Palaeolithic people used to make the pigments and how some of the more complex panels developed over time, have been at the forefront of research on and debates about Palaeolithic cave art in western Europe. This is a decorated cave not to miss.

The guided tour of Pech Merle last about an hour. It begins with an introductory talk about the cave and the art that lasts about 15 minutes. Then the tour of the cave lasts about 45 minutes. It is not possible to tour the cave without a guided tour. 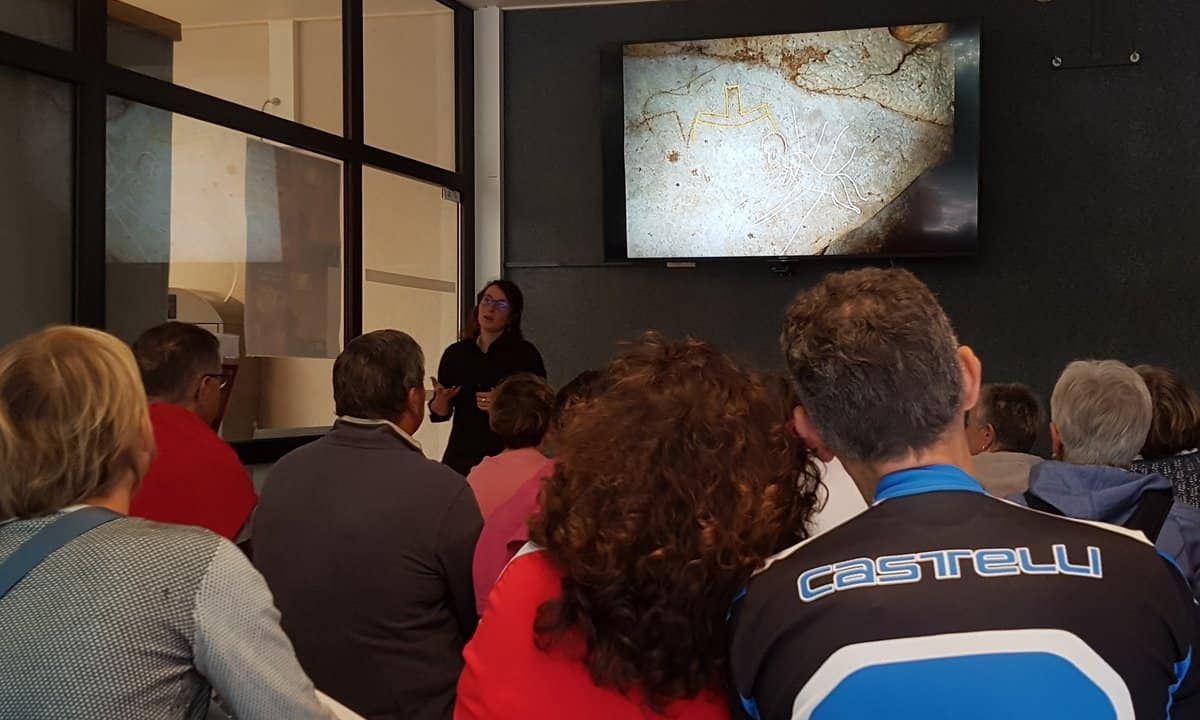 Before descending from the ticket office down to the decorated cave, visitors get a brief but informative presentation that explains how the cave was formed and what you will see on the tour of the cave.

The first stop on the guided tour is in the small cave known as Le Combel. Although there is art in this minor chamber, it is not possible to see it. What you can see in the centre of the cave are the roots of an oak tree that is thought to be about 300 years old. You will also see cave bear, horse, reindeer and hyena bones displayed. They are animals that died naturally – these are not bones brought in by humans.

The first cave art you will see is called the Black Frieze, because the animal figures were all executed in black outline. They were drawn using manganese oxide. There are 25 animals in total, including bison, horse, mammoth and auroch.

Your guide will then point out an extraordinary panel high on the ceiling. At first you will see nothing but a tangle of lines that were made with fingers. A trained eye will show you the outline of mammoths and female figure. A good reproduction of this panel can be seen in the museum.

In this underground gallery you will see large calcite disks. This happens when water carrying dissolved limestone and under pressure is forced through a crack in the rock. The result is a fan shaped spray, which solidifies as the limestone starts to crystallise. A bit like limescale in a kettle, but with much more spectacular results.

The tour will take you by a spot where many thousands of years ago a young child or adolescent was walking barefoot in the mud of this part of the cave. A fine calcite crust was formed, not only protecting and preserving the footprints but also allowing archaeologists to be certain that these are genuine Palaeolithic footprints. You can see a lifesize illustration of these footprints in the museum.

After a number of tight and twisty turns with your guide pointing out some wonderful painted and engraved panels of Ice Age art, you will finally arrive at the panel of spotted horses that Pech Merle is so famous for. Look at the horse facing to your right, and note how the artists have made use of a feature on the cave wall that resembles the head of a horse. Much of the black in this panel was made using manganese oxide, but it has been touched up with charcoal. This use of charcoal has allowed a radiocarbon date of 24,600 years before the present.

Besides the Ice Age decorated cave, there is also a very good museum that explores the prehistory of the area. Entry to the Amédée Lemozi Museum is included in the price of the ticket for the guided tour of Pech Merle. 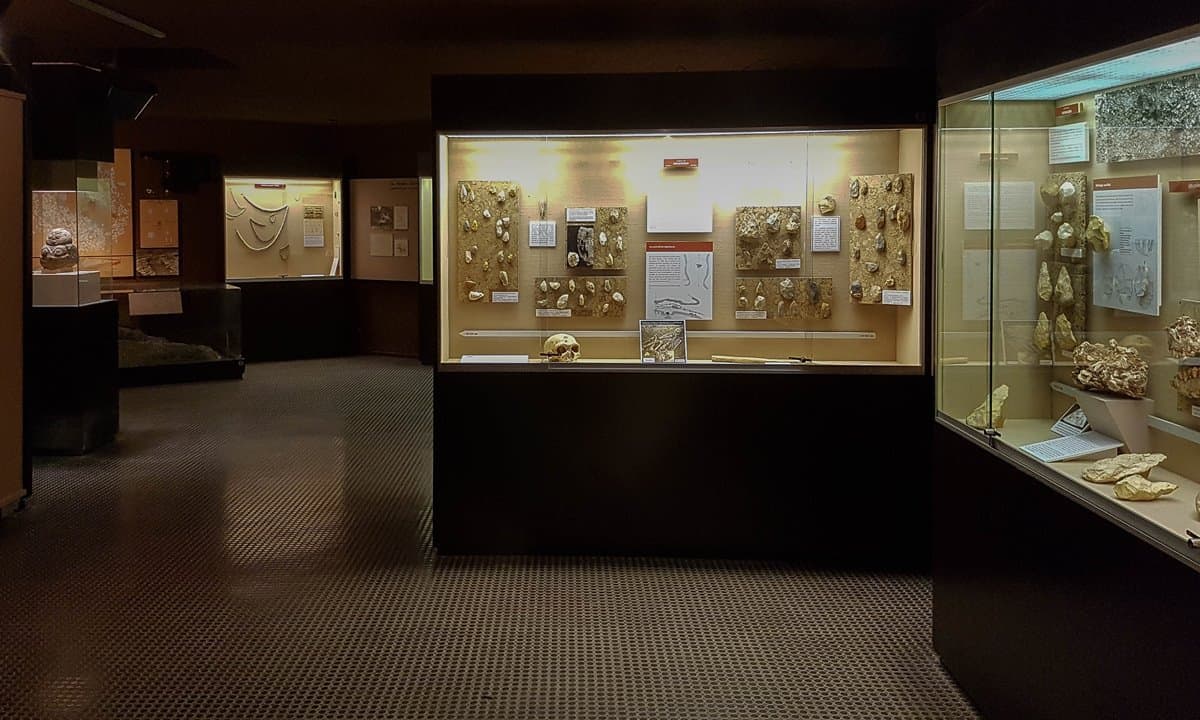 Displays in the on site museum include the archaeology of Pech Merle cave, as well as the prehistory of the area surrounding the cave.

Visitors are required to reserve a place on a guided tour by booking online @ the Official Website. Please note, the page says there are no refunds. I made a mistake with a booking, and they happily changed the details when I telephoned them.

Guided tours of Pech Merle are available in French and English only. And for 2021 the English tours are only available on Mondays, Wednesdays and Fridays in August. If you do not speak French, and can read English, you can ask for their printed guide: it is a very simple document with an introduction and a few sentences explaining each of the stops on the guided tour. 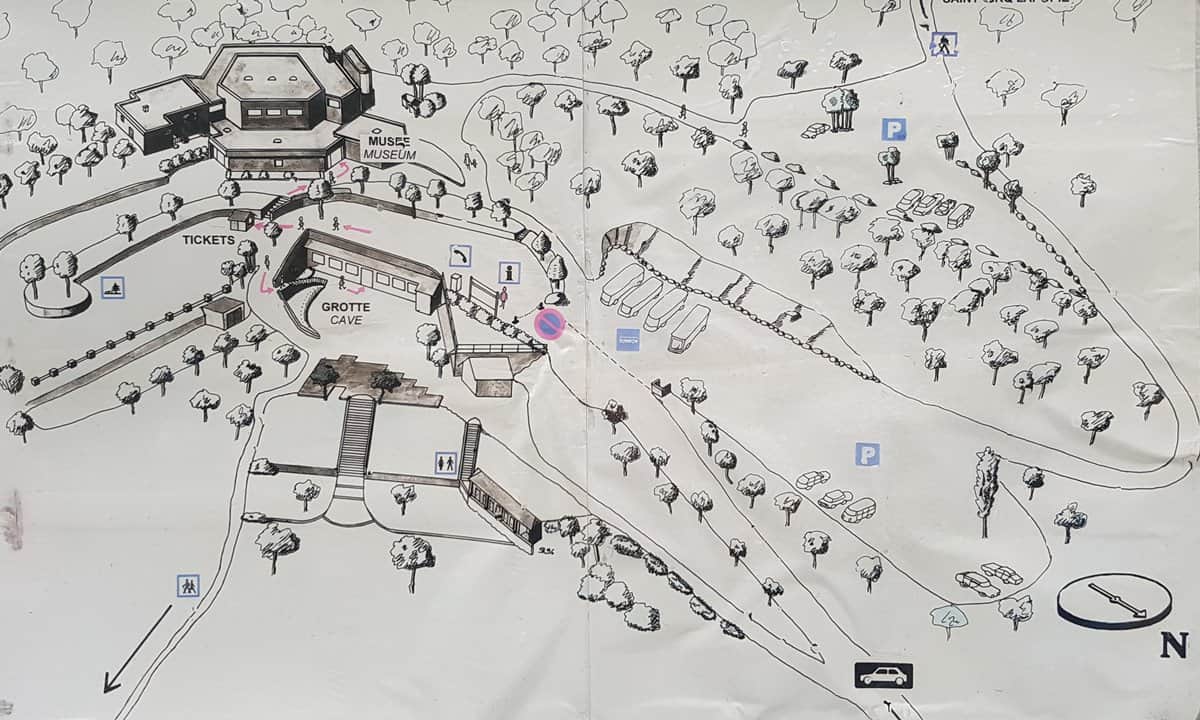 Where is the entrance to the cave?

In the ticket office, on the level below the museum and media centre.

The cave and the museum are open every day of the week between 19 May and 1 November 2021.

Where is Pech Merle located?

The cave and museum are near the town of Cabrerets, in the Lot Department (46) of the Occitanie region of south western France.

Find Pech Merle on a map

You can find the location of Pech Merle on two of our interactive maps: a map of archaeological and historical sites in France and a map of rock art sites around the world. 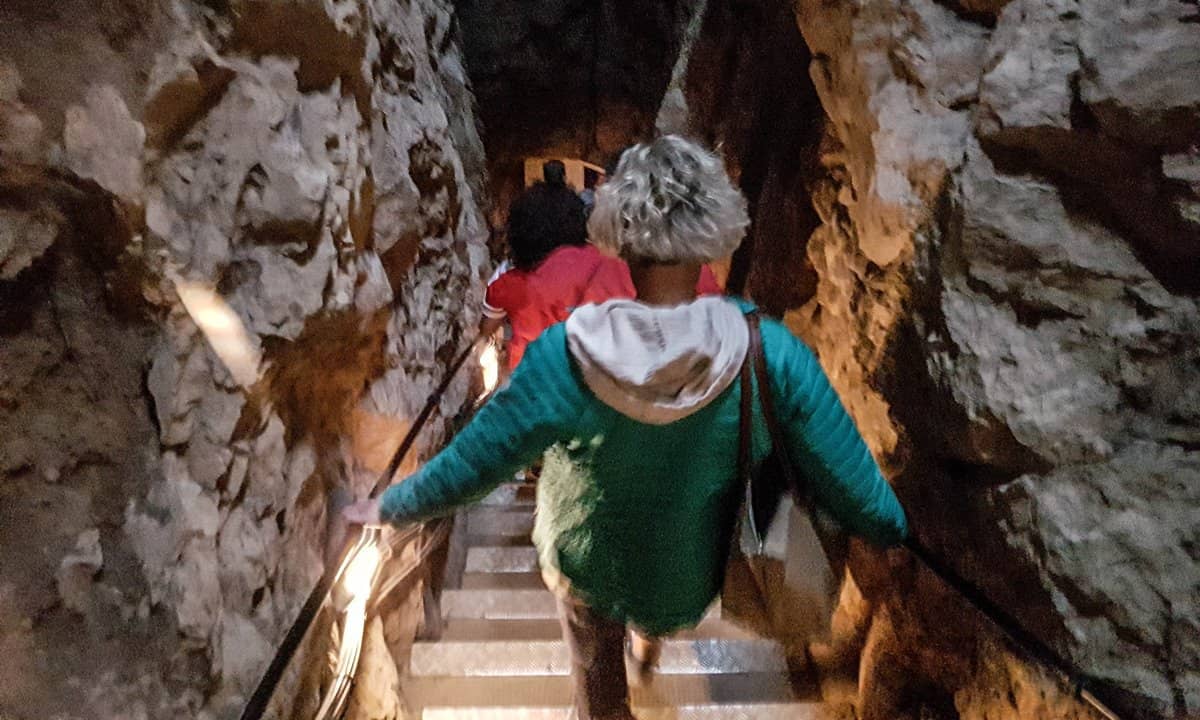 From inside the ticket office there is a steep set of about 50 stairs down to the level of the cave. 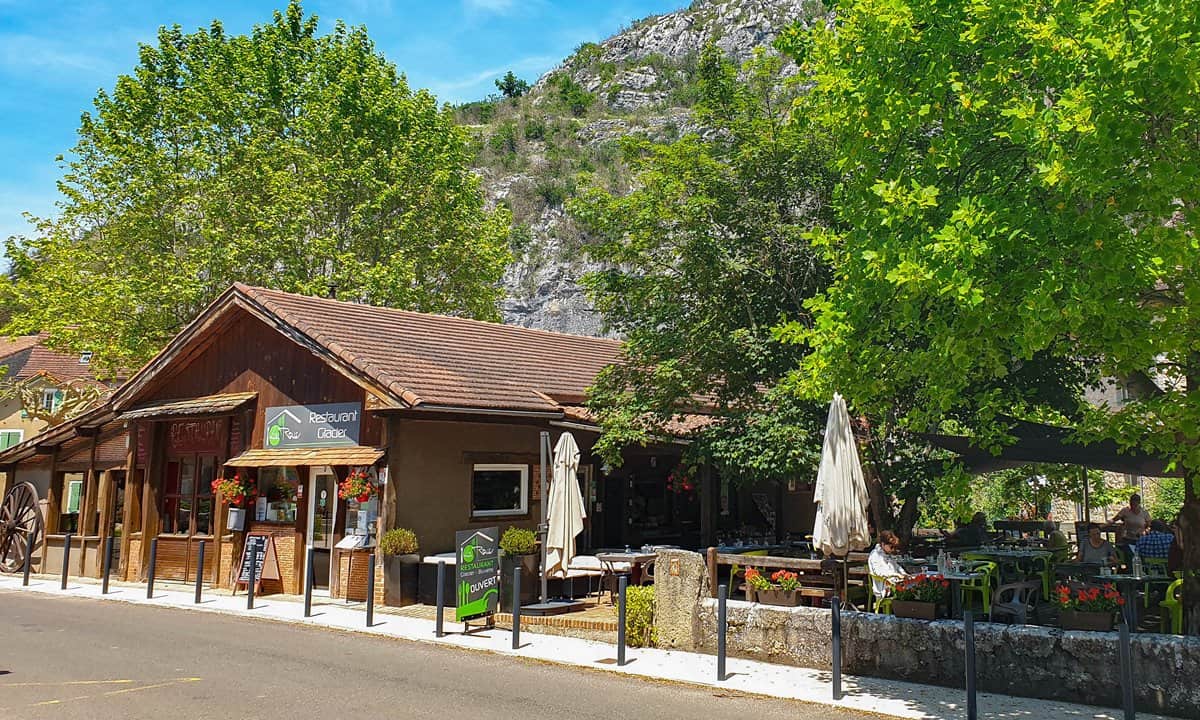 As pleasant the setting is at Pech Merle, Restaurant La Roue in the town of Cabrerets is a much better option, before or after your visit to the cave.

When is the best time to visit Pech Merle?

If you are visiting south western France to see the cave art sites and are based in or near Les Eyzies (my recommended base for exploring as much cave art in the Dordogne and Lot areas of France), you can easily visit Pech Merle on a day trip from there. I recommend visiting Les Grottes de Cougnac and Pech Merle on the same day. Thankfully these two caves are in the same direction, you drive past Cougnac on your way to Pech Merle. Cougnac is about 45 minutes from Les Eyzies, and Pech Merle about an hour and a half. My choice is to book an early morning tour of Pech Merle, have lunch in Cabrerets and then visit Cougnac on the way back to Les Eyzies, stopping in Sarlat after Cougnac.

Simple meals are available at Pech Merle, but I recommend easting at Restaurant La Roue in Cabrerets. The menu has a wonderful choice of local dishes, the food is excellent and if you are pressed for time they are very accommodating.

If I am on a road trip style tour of cave art in France, I often overnight in Cabrerets. If I am travelling northwards from the south, it usually makes sense to overnight in Cabrerets, visit Pech Merle first thing in the morning and then head on to Cougnac for the first or second tour after lunch. Read more suggestions and recommendation for your Cave Art Road Trip through South Western France.

When staying in Cabrerets my hotel of choice is Hôtel Restaurant des Grottes du Pech Merle. And not just because of the name. The hotel is on the banks of the Célé River, and I find there is nothing nicer after a long day on the road to relax on the hotel’s dining terrace. The food is always good, and their rooms comfortable. The perfect end to a day, and equally perfectly situated for an early start the following morning. 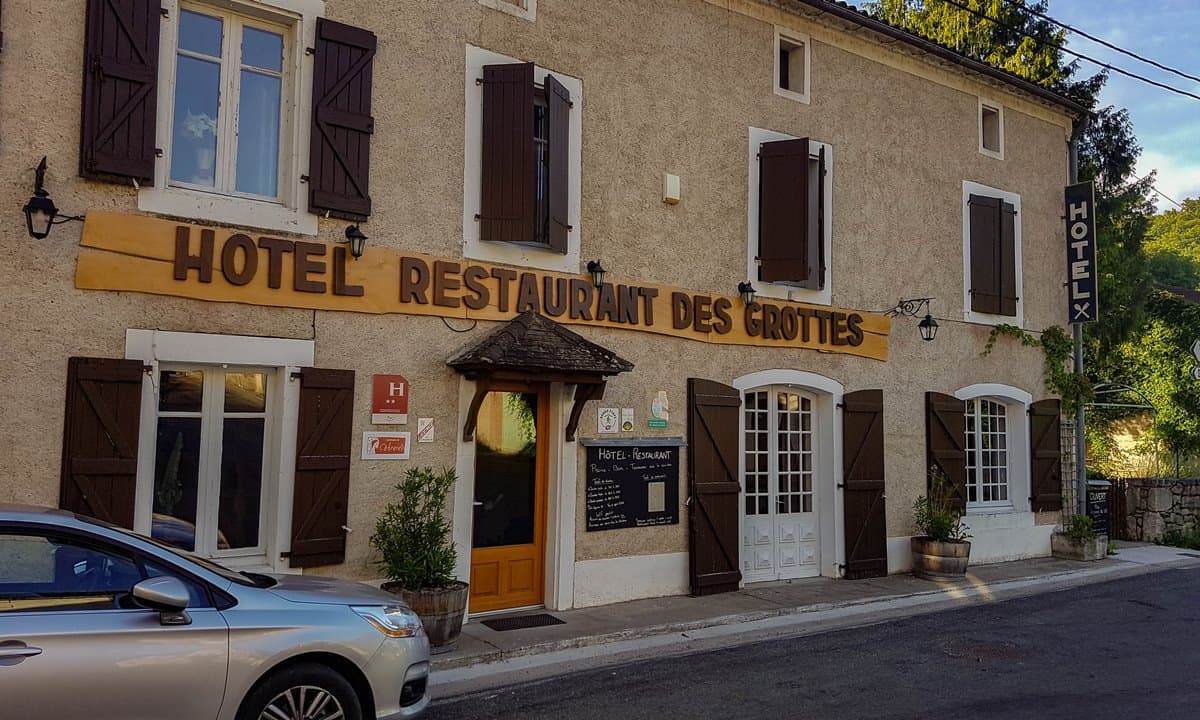 What Else is there to See Near Peche Merle?

To the north of Pech Merle are two other decorated Stone Age caves, Les Grottes de Cougnac and La Grotte des Merveilles. Both are about an hour drive from Cabrerets. For more rock art in France, check our Interactive Rock Art Map.

La Grotte des Merveilles is a great cave to visit for the geology, but there is not much rock art to see. The cave is, however, just above the medieval pilgrim town of Rocamadour. A must for anyone who enjoys the history of medieval religion and pilgrimage sites in France.

Cabrerets is only a 15 minute drive from the beautiful village of Saint-Cirq-Lapopie. Also on the Camino St Jaques, the village, one of France’s most beautiful, is on the side of a steep cliff 100 m above the Lot River. The Impressionist artist Henri Martin made the town popular with other writers and artists, including the writer André Breton. For more archaeology and history near Pech Merle, see our Interactive Map of France. 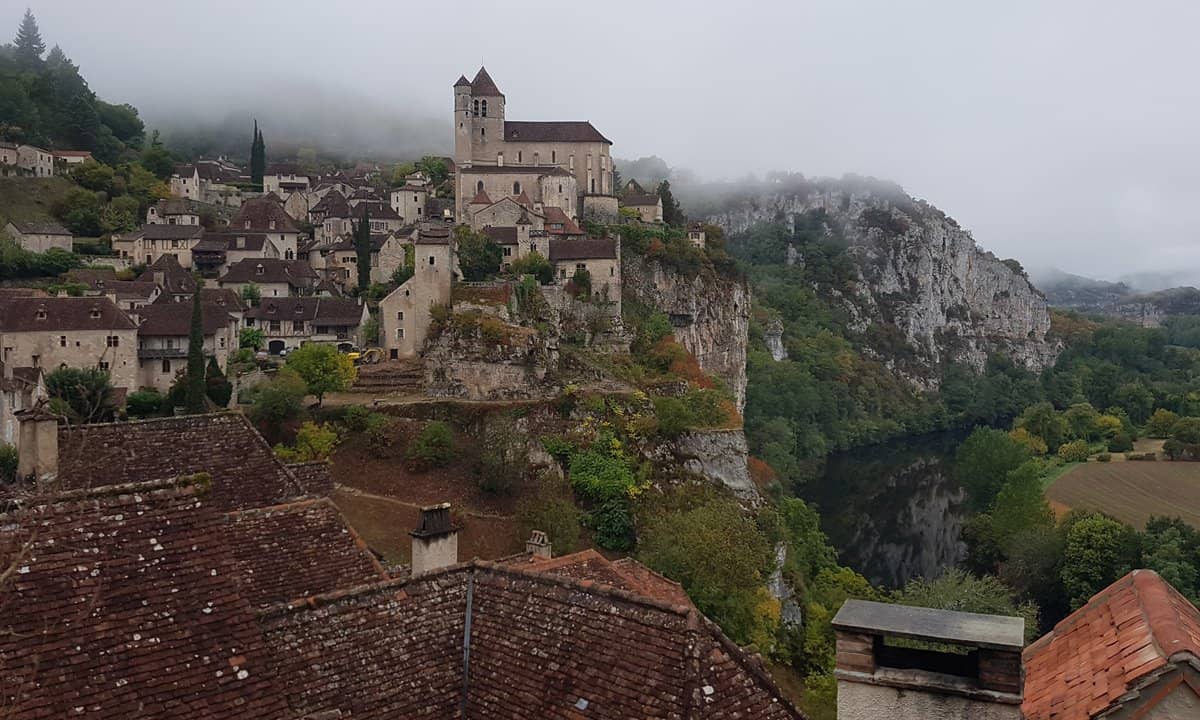 Autumn mist rising above the picturesque village of Saint-Cirq-Lapopie early in the morning. This medieval pilgrim town, on the Camino St Jacques, is about 15 minutes from Pech Merle.

For those staying in Toulouse, combine Palaeolithic cave art with a medieval village voted France’s most beautiful in 2102 national poll. Take a day trip to Pech Merle and Saint-Cirq-Lapopie with a personal guide … more information and book online with GetYourGuide.

Visiting France? If you are planning a trip to France, check our France Travel Guide for History and Adventure Seekers.