A Neolithic chambered tomb 6,600 years ago, a Nazi bunker on the Atlantic Wall during World War II.

Le Petit Mont is thought to be one of the most significant chambered tombs in Brittany. The cairn is located on the very tip of the Rhys peninsula – with wonderful views over the Quiberon Bay, and a great place to take a coastal walk. So plenty to do if you arrive a bit early.

Although this is for all intents and purposes a ‘Neolithic site’, from about 6,600 years ago, it is an excellent example of how sites from one period are re-used in following periods. Artefacts recovered during excavations show that this site was also occupied during the Bronze and Iron Ages. But the most striking signs of re-use is the typical German bunker built into the cairn in 1942. 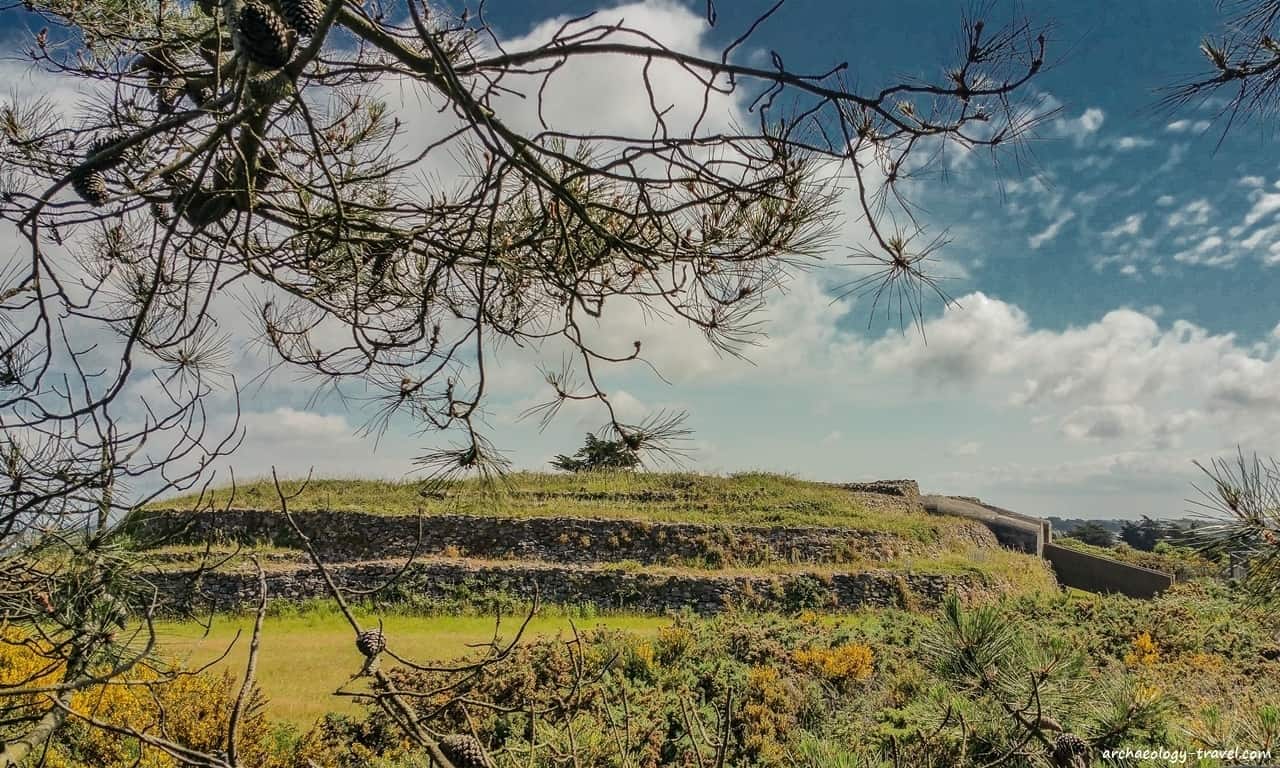 Archaeology of the Chambered Tomb

The entire cairn measures 50 metres east-west and 53 metres north-south, with an estimated volume of stones of 10,000 cubic metres. Petit Mont chambered tomb we see today is the result of at least three different stages of construction.

The first cairn was constructed on a low mound thought to be about 6,600 years old. This early cairn, 6,500 years old, was a simple trapezoidal mound of small rocks that measured about 30 by 20 metres. The cairn was extended between 6,000 and 5,500 years ago with a simple passage and single chamber. Six of the eight megaliths making up the chamber and three of those making up the passage are decorated. Sometime between 4,700 and 4,500 years ago the cairn was expanded, which destroyed the earlier chamber. Two new single chambered passages were created; the later chambers have more engravings in them than the earlier one.

During the second World War, in 1943 to be precise, a bunker or blockhouse was built into the cairn. The bunker was part of the extensive system of fortifications that formed the Atlantic Wall, running from Scandinavia in the north and along the north-western coast of continental Europe. Construction of the bunker destroyed the two older chambers, but facilitated the excavation of the earlier passage and its chamber. 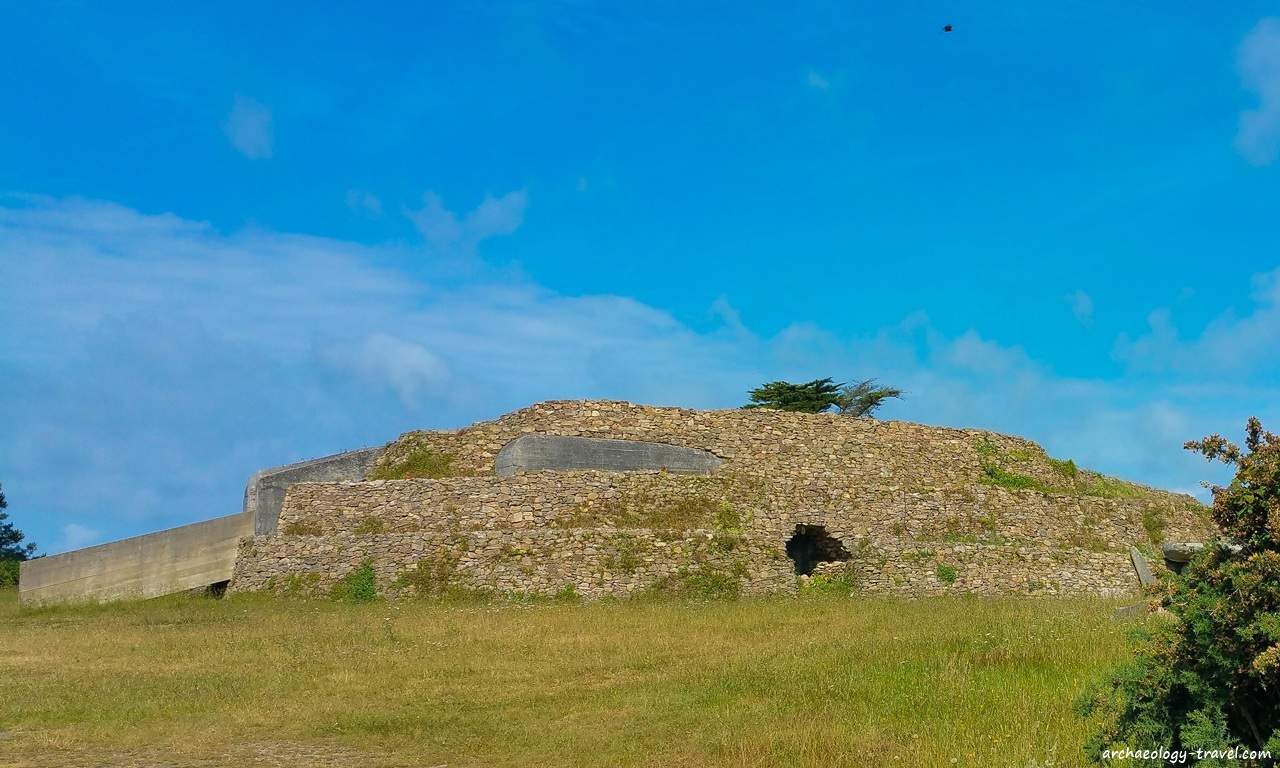 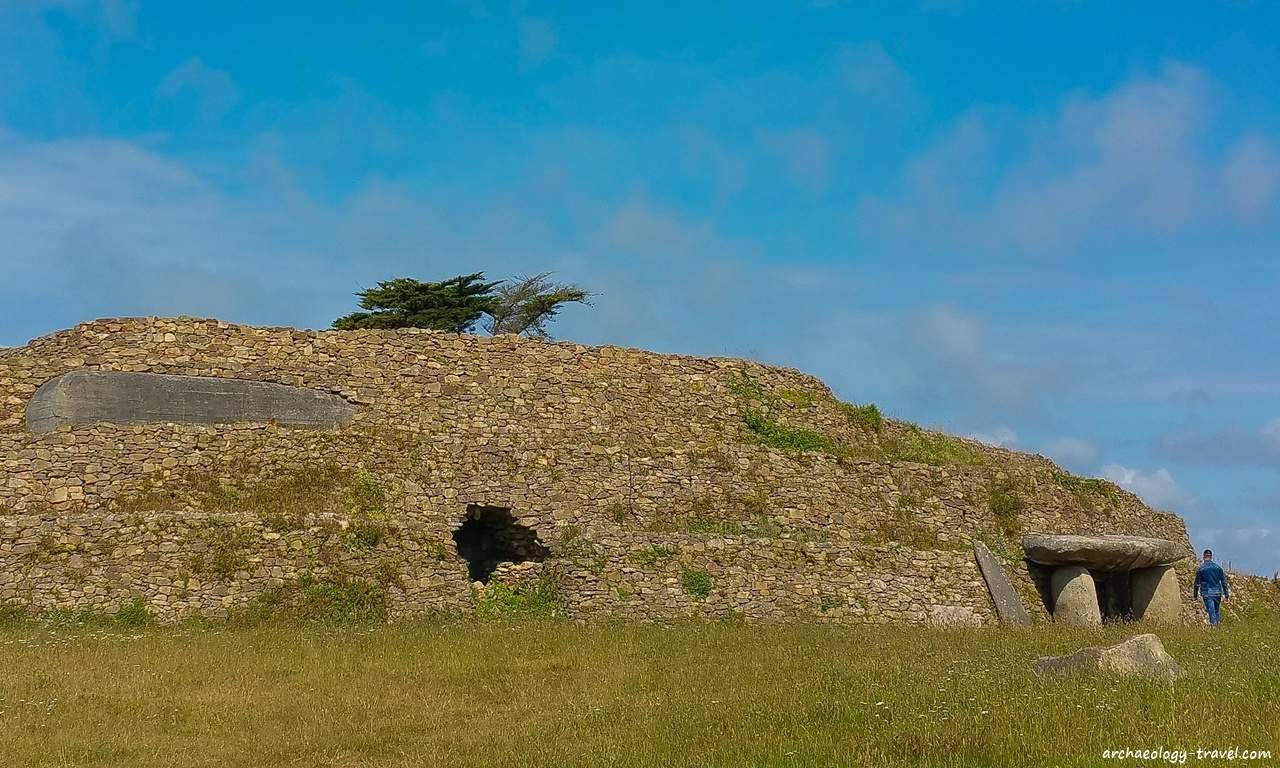 Petit Mont at a Glance