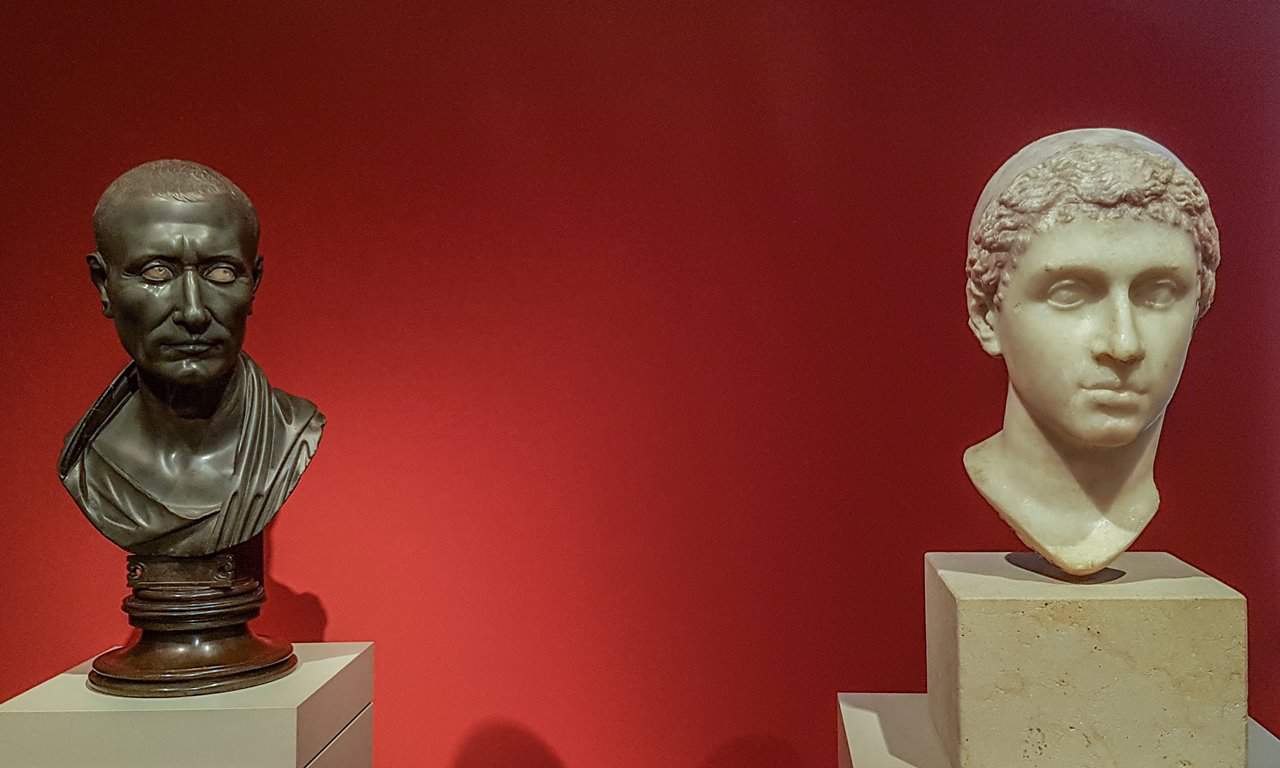 Portrait busts of Caesar and Cleopatra in the Rome - Faces of the Empire gallery in the Altes Museum, Museuminsel, Berlin.

In the Rome – Faces of the Empire gallery of the Altes Museum in Berlin two remarkable portraits are placed side by side. For obvious reasons. They are portraits of the Roman dictator Gaius Julius Caesar (100 – 44 BC) and the Egyptian queen Cleopatra VII (69 – 30 BC). In Classical times these two were united by what has became a legendary romance.

During Caesar’s Civil War (49 – 45 BC) Pompey fled to Egypt after having been defeated in Greece (August 1848). But here Pompey was murdered by one of King Ptolemy XIII’s officers, which drew Caesar into the civil war in Egypt between Ptolemy and Cleopatra VII, who was his sister, wife and co-regent. Caesar sided with Cleopatra, it is thought because the pharaoh role in Pompey’s murder.

Whatever his reasons, Caesar went on to defeat Ptolemy in 47 BC at the Battle of the Nile, following which he installed Cleopatra as ruler of Egypt. And then began one of the most famous love affairs in history.
After Caesar returned to Rome, Cleopatra frequently visited him there where she lived openly as his mistress in one of his country residences. Caesar and Cleopatra were never married, but they continued their affair throughout Caesar’s last marriage. Some think he father a son called Caesarion.

Cleopatra was in Rome when Caesar was assassinated; stabbed to death during a meeting of the senate. Archaeologists believe they have found the exact spot in Torre Argentina Square – which can be visited today.

It is only fitting then that the museum has chosen to display the very distinctive portrait of Gaius Julius Caesar, known as the ‘Green Caesar,’ alongside a portrait of Cleopatra.

The exact provenance and reasons for the creation of the Green Caesar are not known. As it is made of green slate that comes from Upper Egypt and because the technique used to depict the hair is typical of Late Egyptian art, most accept that the portrait was made in Egypt. Then at some time in ancient times it was taken to Rome and erected there, and discovered in Modern times and taken to France.

While in Paris the sculpture was in the possession of Jean de Jullienne, a prominent Parisian businessman and art collector. In 1767 it was acquired for Frederick II of Prussia and became part of the Prussian royal family’s art collection. The Neoclassical Altes Museum we visit today was in fact built in the 1820s to house this extraordinary collection.

The museum was severely damaged during World War II. And with the separation of Germany at the end of the war, the collections and the museums were divided. But the Altes Museum was the first museum on the island to be restored. Following the reunification of Germany and the coming together of the collections and the museums and further restoration work, the new permanent exhibition Etruscan and Roman Art opened in the Altes Museum in 2010, in which the Green Caesar and the portrait of Cleopatra were placed side by side. 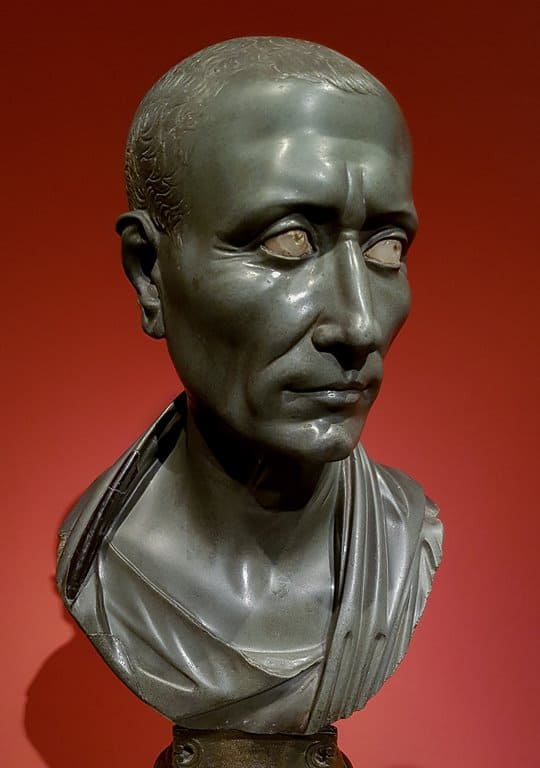 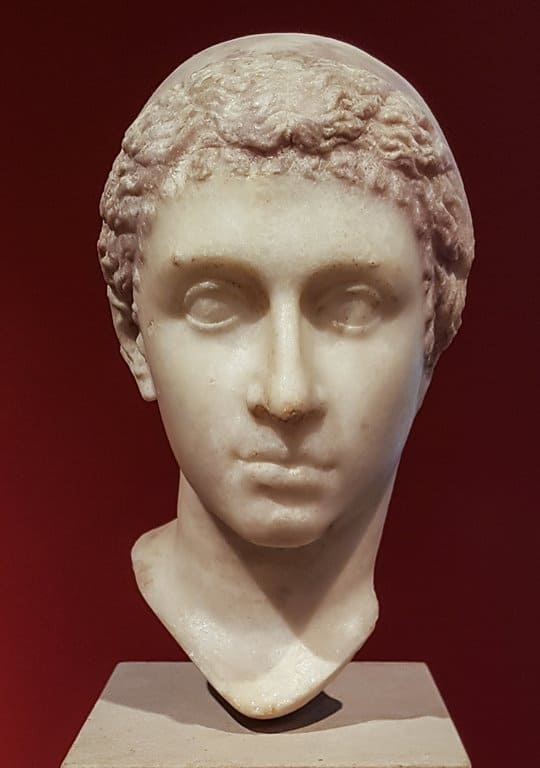 Unusually the portrait is executed in grey slate, rather than marble. The inlay eyes are modern. At 41 centimetres high, it is just over life size. It depicts an ageing Caesar, with a receding hairline and lines and wrinkles abut the face. Wrapped in a toga we see an elderly statesman with dignity and authority, having a strict and serious expression that befits a statesman.

This is a posthumous portrait, the only known portraits of him created during his life are those on coins. All the sculptural portraits of Caesar that have survived were created after his death, and follow a Replication tradition that depict the values expected of a statesman as opposed to highlighting military qualities and capabilities.

The marble bust of Cleopatra is dated to sometime between 40 and 30 BC, so executed in her lifetime. It was recovered on the Via Appia between Ariccia and Genzano – where, it is thought, it would have decorated a private villa.

There is no doubt the portrait is that of Cleopatra. Here she is depicted with a distinctive ‘melon hairstyle’ with a bun at the nape of the neck – as seen in many other sculptural portraits and verified by depictions on coins. This is a style that was typically used by Ptolemaic queens. Cleopatra’s royal status is further indicated with the broad royal diadem of the Ptolemaic dynasty.