Housed in the Museum of Cycladic Art in Athens is one of the world’s finest private collections of art and artefacts from the Cyclades. The antiquities from Cyprus represent one of the largest collections in the world outside of Cyprus. With hundreds of exquisite artefacts in permanent exhibits on four levels, this museum is a must for anyone interested in the art and archaeology of the islands of the Aegean and Cyprus. Here we provide a review of what is one display, as well as basic visitor information for buying tickets and taking a guided tour.

The entrance to the museum housing the permanent exhibitions of the Museum of Cycladic Art on Neophytou Douka street.

The Nicholas P. Goulandris Foundation – Museum of Cycladic Art, to give the museum its full name, was founded in 1986 as a depository for the collection of Nicholas and Dolly Goulandris. Together they started collecting artefacts from the Cycladic islands in the 1960s.

In 2002 the Museum acquired another internationally renowned collection of antiquities. The Cypriot collector Thanos N. Zintilis donated one of the largest collections of Cypriot antiquities in the world outside of Cyprus.

A range of designs of the iconic Cycladic figurines above the entrance to the museum.

What is Cycladic Art? 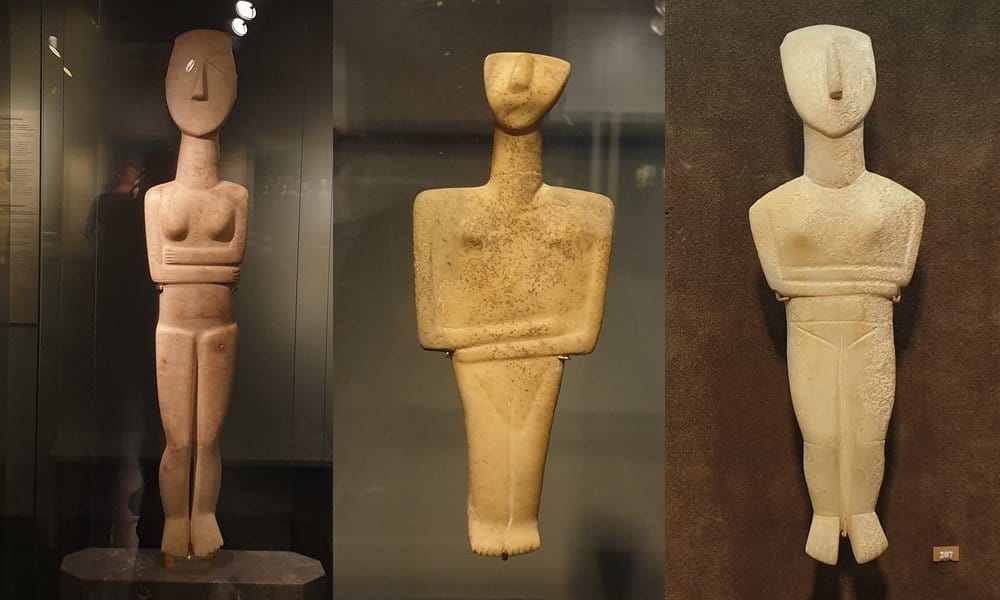 The Cyclades is a group of 32 large islands (and many more smaller ones) in the central and southern Aegean Sea. During the third millennium BC people started using metals (mostly copper to begin with) from which to make their tools, weapons and other objects people use in the course of their daily lives.

Archaeologists believe that the people of the Cyclades during this period, the Early Bronze Age, represent a unified cultural entity with connections to Crete and mainland Greece. Towards the end of this period, people started living in fewer and larger settlements such as at Phylakopi, an archaeological site that can be visited on the island of Milos.

Distinctive products from the Cyclades of this time are vessels and anthropomorphic figurines made of marble. It is these figurines that have come to define ‘Cycladic art’. Of course they vary over the millennium. They are small, most up to 60 cm, but there are some that are much higher – up to 1.5 m in height. Most of these figurines are female – with an incised pubic triangle, although there are some male figurines. They are thin with a decidedly schematic outline, with some anatomic features such as arms, noses and breasts are more sculptural. Interestingly, the arms are folded.

The Museum of Cycladic Art has a wonderful collection of these figurines, from the very small to the largest that stands 1.4 metres high. The display of these, with detailed information panels allows you to see how these iconic figurines changed through time and get an impression why they have became so collectable.

The Goulandris collection of Cycladic art first went on public display in 1978 at the Benaki Museum. From 1979 until 1983 the collection travelled widely to leading museums around the world, before returning to Athens and its present home. 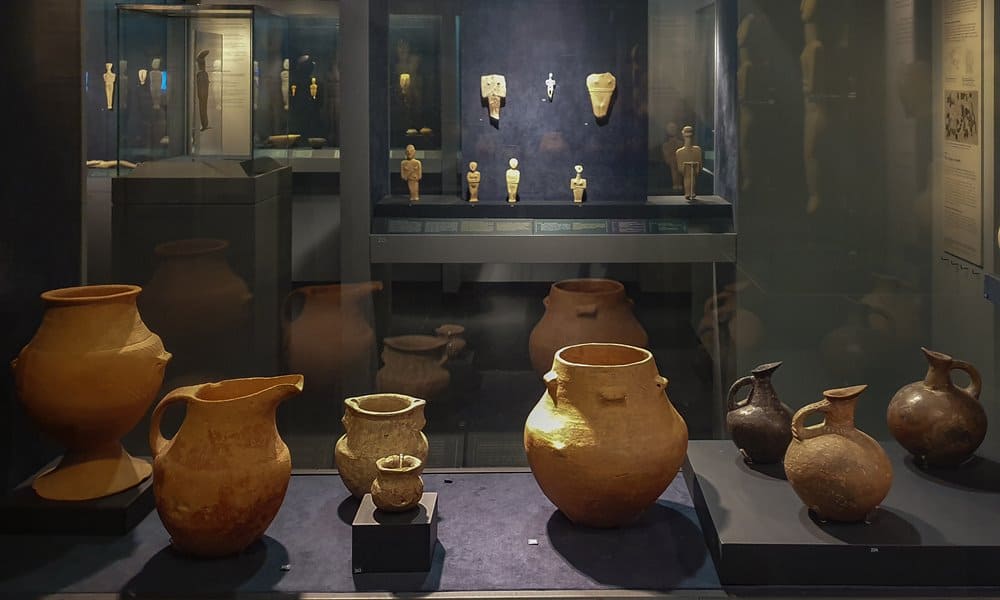 On the first floor of the museum visitors will find the Cycladic Art exhibition. The range of artefacts on display is impressive. Besides a large number of marble figurines and vases, there are also examples of some of the earliest bronze objects. Some of these were items that were used in the course of daily life such as weapons and tools, others were associated with rituals. 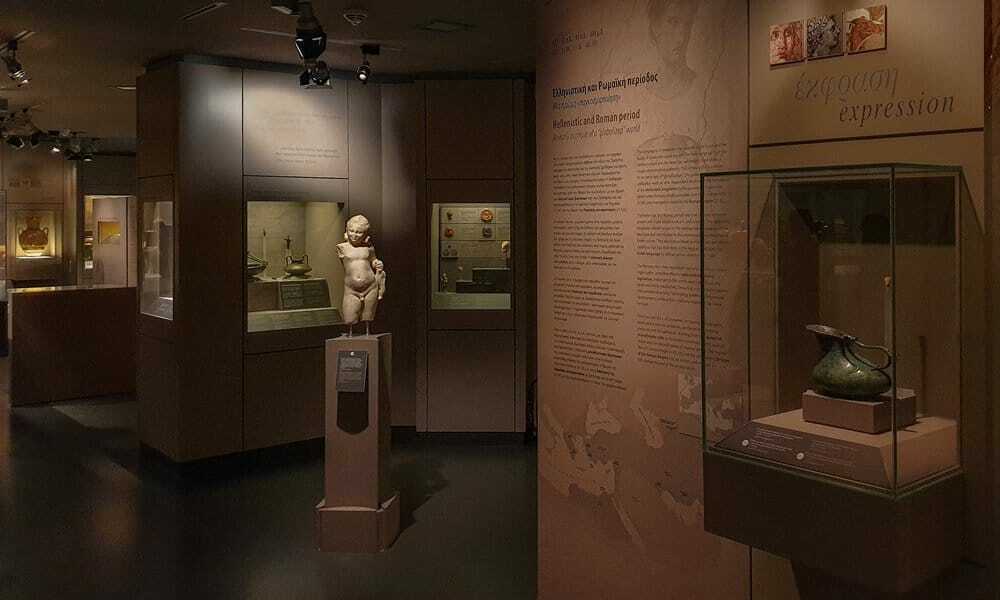 The first of the Ancient Greek Art exhibitions is on the second floor. Some 400 artefacts covering a period from the 2nd millennium BC to the 4th century AD provide an overview of image making in ancient Greek history. These objects include painted vases, terracotta figurines, bronze vessels, stone sculptures, coins, gold jewellery and glass items. The exhibition provides an good introduction to the history of Classical Greek and Roman art.

In an exhibition that opened to the public in 2012, over 500 artefacts from a collection of some 800 objects tell the story of art in Cyprus from the 4th millennium BC to the Medieval period. These artefacts include prehistoric figurines, Archaic and Classical sculptures, inscriptions and coins, jewellery and finely crafted goldwork, impressive glasswork, as well as numerous ceramic vessels and objects. 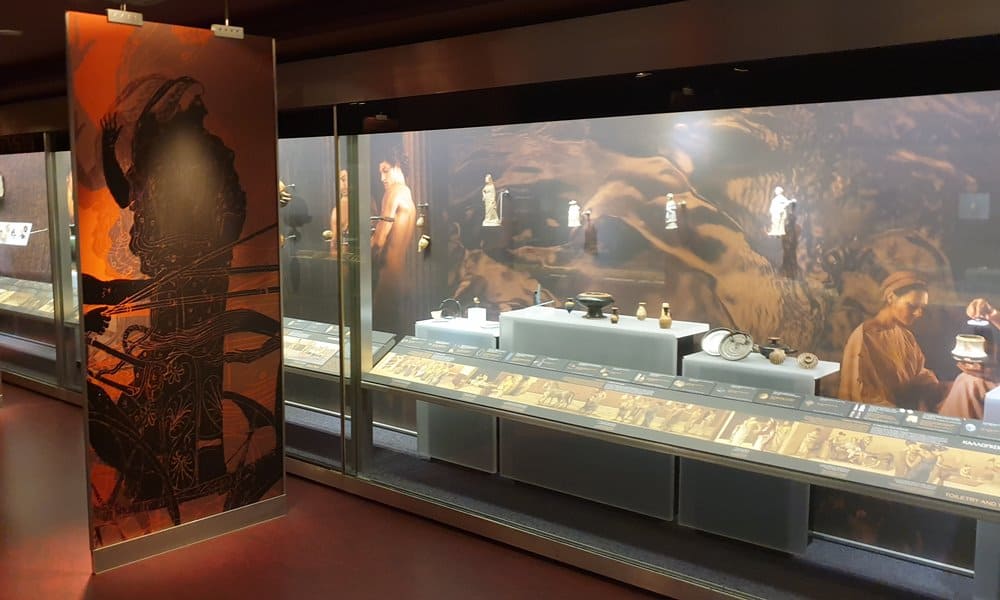 The second of the exhibitions of Ancient Greek Art, on the fourth floor, gives us an idea of everyday life in Classical Athens. Unlike the three other exhibitions, the displays on this level are accompanied by numerous illustrations and photographs in an attempt to provide a context for the objects frequently seen in more neutral museum displays.

Antiquarianism and Philhellenism. The Thanassis and Marina Martinos Collection
This exhibition will juxtapose European Greek Neoclassical sculptures and oil paintings from 19th century with examples of ancient artefacts.

Visiting the Museum of Cycladic Art

Where is the Museum of Cycladic Art?

Buy tickets online, in advance on Tiqets >>
As of November 2020, tickets cost €7 for adults (19 to 64 years), half price for EU students and adults 65 years an older. Children 18 and under, and disabled visitors and 1 carer can enter free of charge.

The Museum of Cycladic Art is included in the Athens Museum Unlimited Pass. For only €55 holders get entry to 16 of the leading sites and museums in Athens for a period of three days. Included: the Acropolis, the Acropolis Museum and 13 others. By far the best value pass for Athens.

Guided Tours of the Museum of Cycladic Art

Private Guided Tour of the Cycladic & Benaki Museums
Combine a tour of the Museum of Cycladic Art with the nearby Benaki Museum – the only museum in Greece with artefacts and objects from each period of Greece’s past. This is a private tour, that lasts 2 hours.

National Archaeological Museum & Museum of Cycladic Art
Another private tour, this one lasts 5.5 hours. Besides two of the best archaeology museums in Athens, this guided tour also includes a drive up Lycabettus Hill for a bird’s eye view of Athens.

Virtual Tour of the Museum of Cycladic Art

The museum’s website allows you to explore the collection online, following the categories used in the permanent exhibitions.

For those interested in a live virtual tour, the museum in collaboration with the Hellenic-American Chamber of Commerce, will be hosting their first virtual tour with Greek prehistoric archaeologist Metaxia Routsi. This will be streamed live on 21 November, from 19h30 to 20h30 Central European Time. There is no charge, but registration is required.

Attic red-figure kylix: the interior depicts a naked youth filling his kylix with wine from a krater, while the exterior depicts a typical symposium scene of men lying around after a banquet drinking from their kylikes.