If you have ever visited the Greek island of Paros you will understand why one of the most frequently asked questions is “how many churches are there in Paros?” By all accounts there are 450, of which 150 are in the towns and villages and the rest dotted about the countryside. There are also 30 monasteries, but only five are used as such today. Not surprisingly, Paros is one of the most important destinations in the Cyclades for those interested in the island’s Byzantine and Post-Byzantine heritage. 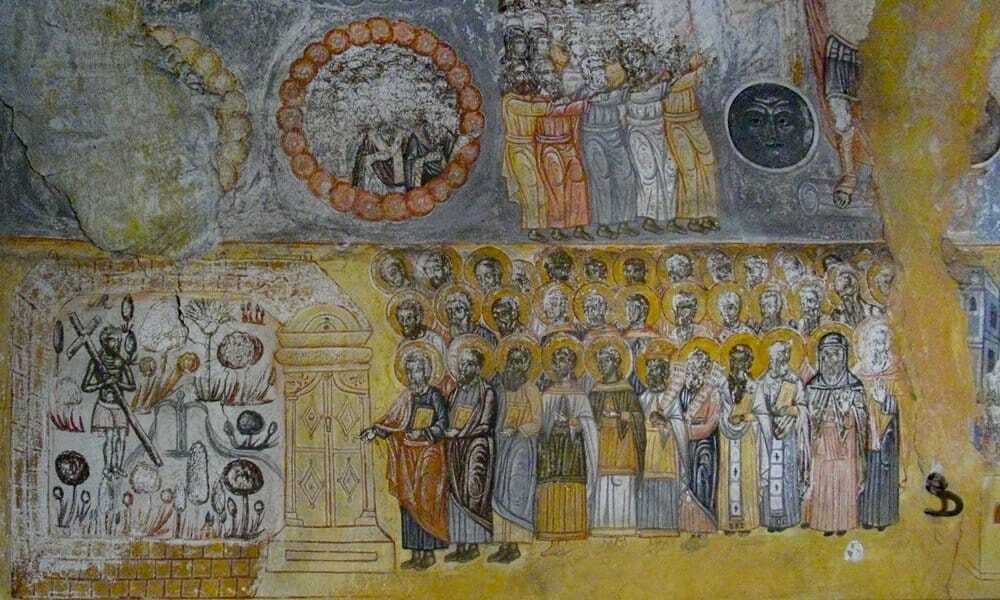 Part of a larger frescoed wall in St. John the Theologian Church, a biblical scene that depicts Jesus in a walled garden holding the cross with the Apostles and a crowd of followers at the gate.

Naoussa is widely regarded as one of the prettiest towns in Paros. Certainly it is popular with visitors to the island. People have been settled in the area since Mycenaean times, the remains of what is said to be a Mycenaean palace can be seen at nearby Koukounaries. Although the town itself was established in the Byzantine era, what makes Naoussa so picture perfect today was mostly developed by the Venetians. The distinctive Venetian Castro still dominates the port.

The old town is a typical maze-like combination of pristine white buildings and and narrow alleys that create randomly shaped open spaces where they meet. Seemingly crammed into one such space is a snow-white and blue domed church, St. John the Theologian Church. From the outside, the small church seems nondescript – built to occupy an open space among the buildings. Stepping inside, however, is a must for anyone with even the remotest interest in religious art and history. Once inside you see the plan of a typical cross-domed church, with well preserved frescoes.

Where is St. John the Theologian Church?

Without street names and the seemingly random network of alleys it is difficult if not impossible to give you directions.

On Archaeology Travel we regularly use What3Words for navigational information. And this must be one of the best examples of where it works perfectly!

You can also locate the church on our Interactive Map of Archaeology and History Sites and Museums in Greece. Click through to that map, and you can search for other historic places of interest in Paros, and nearby. 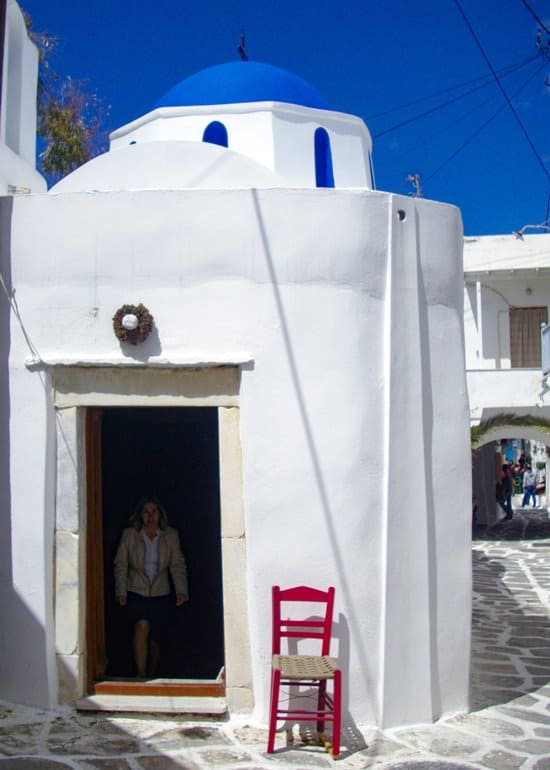 As you enter the church you will notice the marble door frame. The marble almost certainly came from Classical buildings nearby or elsewhere on the island. Re-using stone from ancient sites in this way, known as spoliation, is found on both secular and religious buildings. Once it is pointed out you will notice it is not uncommon in Naoussa, with some quite spectacular examples in nearby Parikia. 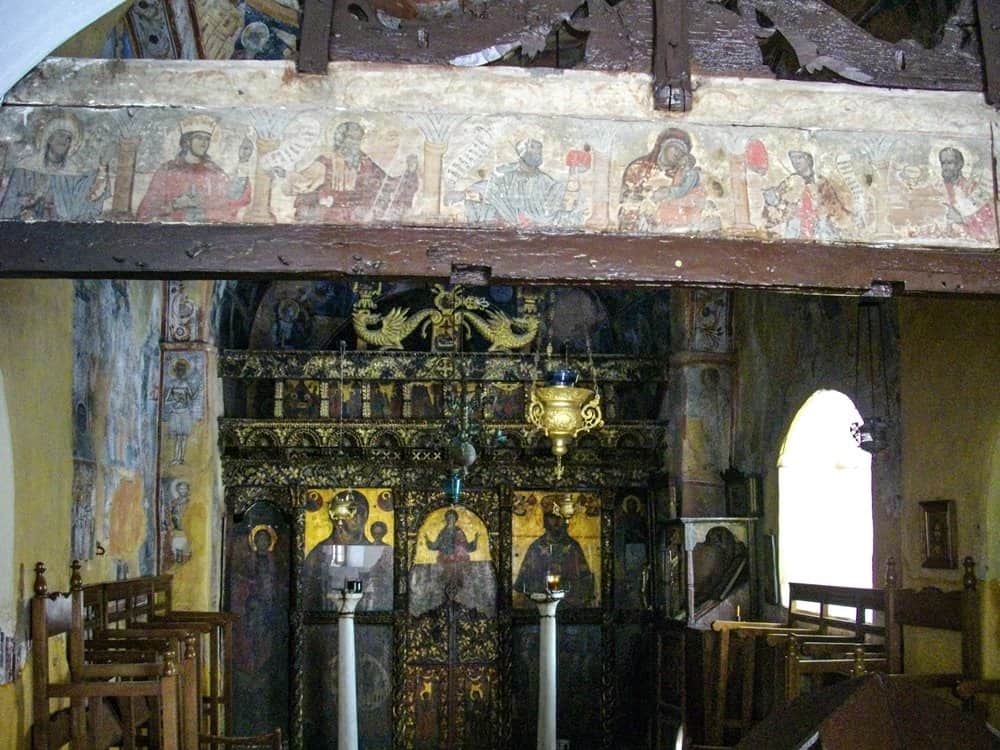 Standing in the narthex, looking into the naos, or nave, of the church.

Stepping into the narthex you see a very simple plan. This is a typical Byzantine style church reduced to its fundamental form, as is so often seen in small towns and in the countryside in Greece (an example in Crete). A dome and its drum is supported by pendentives, the arms here (that would normally form the cross) are greatly reduced, enough to create a sanctuary and the narthex (entrance gallery or antechamber). On the other axis the arms are present only as alcoves, which are highly decorated.

Although the interior is a bit blackened from the burning of incense and candles over the centuries, the interior in contrast to the simple exterior is richly decorated. This being quite typical of Byzantine religious architecture. The focus of attention inside is definitely on the central space, the naos or nave, below the dome. An ornate and highly decorated iconostasis hides the apse or sanctuary – the ceiling of which has more beautiful and even better preserved frescoes than those you can see in the side alcoves. 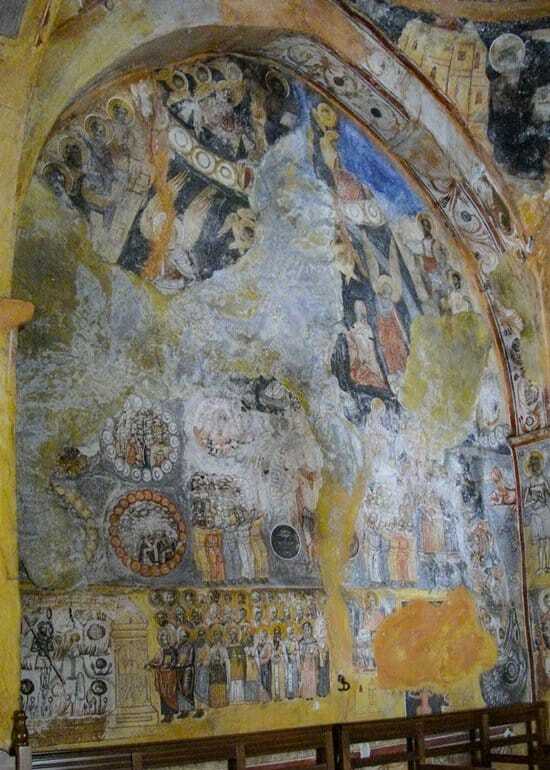 Frescoes in the alcove to the left of the entrance. A close-up of the bottom left portion is at the top of this article. 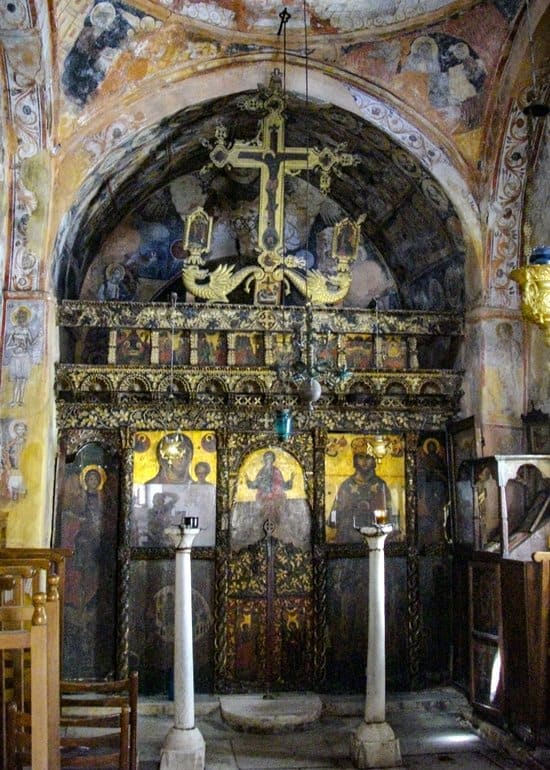 The Iconostasis – typical of Post-Byzantine churches in Eastern Orthodox traditions.

Unusually for churches of this size, the iconostasis is not only present but quite elaborate. The purpose of this lavish screen is to hide the altar in the sanctuary from the worshippers. As is always the case, the sanctuary here is a step up, and you can see the rounded, central extension of the walkway in front of the screen. The walkway, called the soleas, is minimal in this church, but the extension or ambon, is obvious. The priest will stand on the ambon and deliver the litanies.

Strict rules not only govern who can pass through the doors and when, but also what icons are included on the screen and where they are placed. For example, either side of the royal doors you will always see two specific icons: to the left the Incarnation (mother with child) and on the right of the door the second coming of Christ the Pantocrator.

Notice the golden dragons towards the top of the screen. These creatures played an important part in the Byzantine supernatural imagination. Their carving, in wood, keeps the top of the screen open. This allows the congregation to hear clearly the chanting of their priest in the sanctuary. 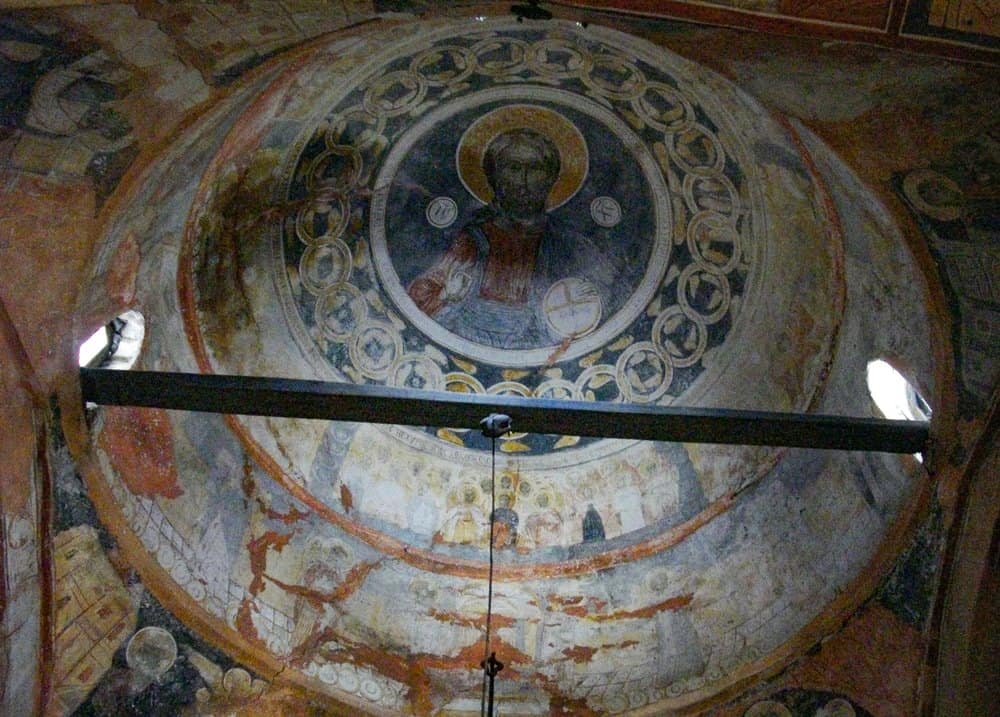 The dome, with the usual image of Jesus Christ Pantocrator, is supported by a decorated drum with two windows.

As with all Eastern Orthodox churches, the dome is something to behold. This is because they hold such powerful symbolism. And this church, as small as it is, is no different. The dome is supported by a drum, which has two windows allowing light in. These windows, however, were not added to simply let light in. Like all other architectural features in the church, they were more than practical.

The windows are intended to give the impression that the dome is suspended on a halo of light, as if it is ‘floating in heaven’. And the image we always see in the dome is Christ the Pantocrator, or Christ Almighty. So it is Christ who is ‘floating’ in heaven. The manner in which Christ the Pantocrator is depicted is highly standardised, and has been for centuries – read more this and see further examples.

Although typically Byzantine, this church was built later. The inscription on the stone next to the double-headed eagle emblem suggests 1687. This ties in with current understandings of the history of Naoussa. The Venetians developed the port town in the aftermath of the Fourth Crusade in 1204 when Byzantine territories were lost to the Crusaders following the sack of Constantinople.

The Byzantine Empire was then split up and the Duchy of the Archipelago was created, which centred on the islands of Naxos and Paros. Paros remained under Venetian control until it was taken by Ottoman Turks in 1537. From then the Cycladic islands were within the Ottoman Empire until the Greek War of Independence in the 1820s.

During the Ottoman period, the seaside town of Naoussa spread beyond the confines of the Venetian walls. And it was during this expansion that area around the St John Theologian Church was built. This corresponds to the date inscribed on the slab in front of the iconostasis. Even though the church was not constructed in the Byzantine era, the islanders, much like the rest of Greece at that time, continued to practise Eastern Orthodox religion. Churches remained the same, rituals performed within them remained the same. 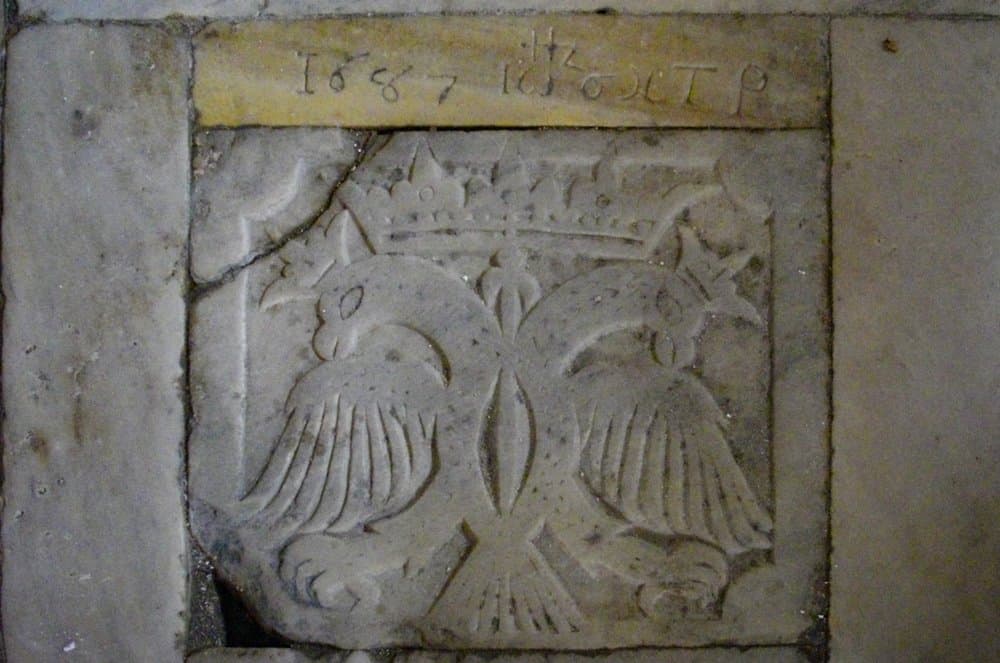 The double-headed eagle, commonly associated with empire – from the Roman Empire to the Holy Roman Empire and even the Ottoman Empire, and an inscribed date of 1687.