Alghero is a beautiful medieval city located on the north-west coast of Sardinia. During the summer months it is a bustling tourist resort but never ceases to lose its rustic charm. An absolute must is walking the Medieval city walls of Alghero. On my recent trip to Sardinia in September I found it a perfect way to familiarise myself with the city while breathing in its history along the way. 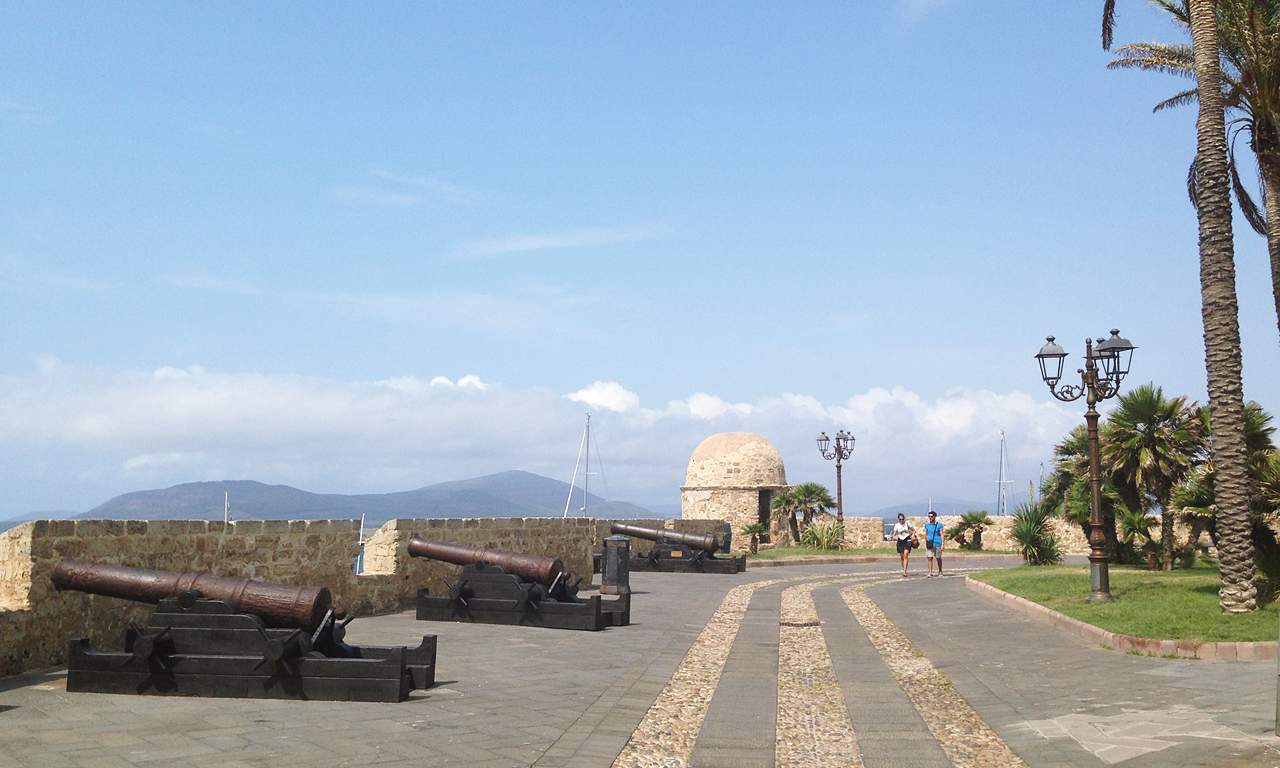 A view northwards along to the Bastioni Pigafetta - lined with artillery cannons facing out to sea. In the background is the old city watchtower.

The first known settlement here was a prehistoric Nuragic village, which was occupied by the Carthaginians and then the Romans. The initial fortifications were built during its time as a strategic Genoese port and town, between the 12th and 13th century. However, a Catalan-Aragonian invasion just a century or so later resulted in the expulsion of the Sardinian people, and the old town was repopulated with Catalans. Alghero was occupied by Catalan – and later by the Spanish for a period of about 400 years. During this time it and had grown into a prominent trading city, famous for its precious red coral. The building of further structural defences occurred during the Medieval Period, but much of the golden sea walls and battlements we see now were constructed in the 16th century (with some later additions). Today, Alghero is often referred to as ‘little Barcelona’, due to its abundance of Catalan-style architecture. There is also a distinct cultural influence here, with a local Catalan dialect known as ‘Algherese’ still being spoken by some of the city’s older residents.

The sea walls and bastions run from Piazza Sulis in the south, to Porta a Mare in the north. A leisurely walk along the ramparts takes around one hour (this factors in photo opportunities and the odd purchase). The promenade is pedestrianised so choice of footwear can be fairly liberal – and so like a true tourist, I opted for flipflops.

At a height of over 20 metres, I found Torre di Sulis to be a helpful landmark as a starting point. It is a three-storey cylindrical tower with walls six feet wide. The structure owes its name after the famous revolutionary Vincenzo Sulis who was imprisoned inside for 22 years (slightly harsh in my opinion) at the turn of the 18th century. It has been repaired in recent years, with the interior now being part of Alghero’s museum complex.

Next I continued north along a stretch of the walls known as the Bastioni Cristoforo Colombo. If you carry on down this route, it won’t be long until the ruin of the Torre di San Giacomo comes into view. It sits at the corner point between the Bastioni Cristoforo Colombo and Bastioni Marco Polo. Octagonal in shape, I was surprised to see the tower’s foundations appear to rise straight from the sea! 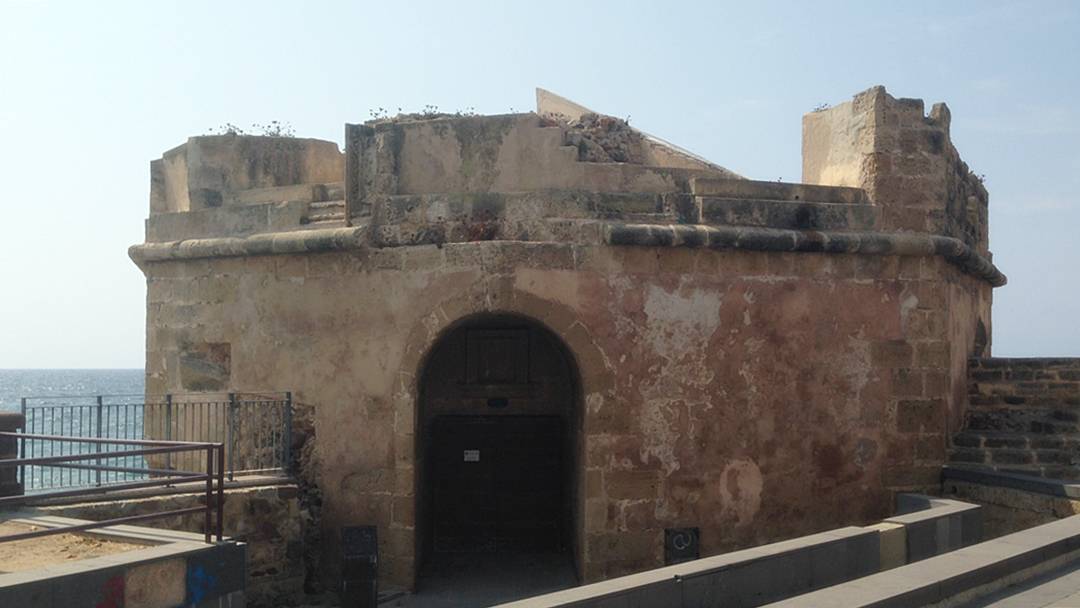 The Torre di San Giocomo originally had three storeys but the third is now completely destroyed. In its time, the tower has functioned as both a weapons and ammunition storage facility and a municipal kennel! The restored interior now houses a small museum exhibition.

Heading along the Bastioni Marco Polo, there is a steady stream of places to eat and drink – I may have given in to my urges and stopped for a refreshing beer (I recommend Sardinia’s local brew ‘Ichnusa’). There are also fantastic views out to sea and Capo Caccia. The promenade here is lined with reminders of Alghero’s turbulent past – catapults and artillery cannons poised as if waiting for an attack from the French fleet, as was the case in 1793 AD. Bastioni Marco Polo is definitely worth heading back to in the evening, whether for a stroll along the ramparts when lit-up, or to enjoy an evening meal accompanied by a glass (or two) of Sardinian wine. 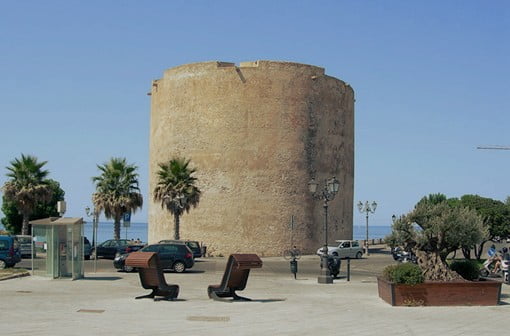 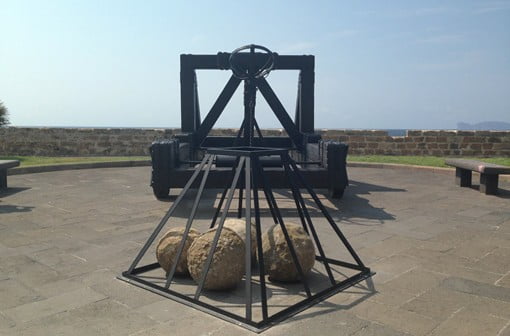 A catapult along with ammunition looking out over the sea walls. 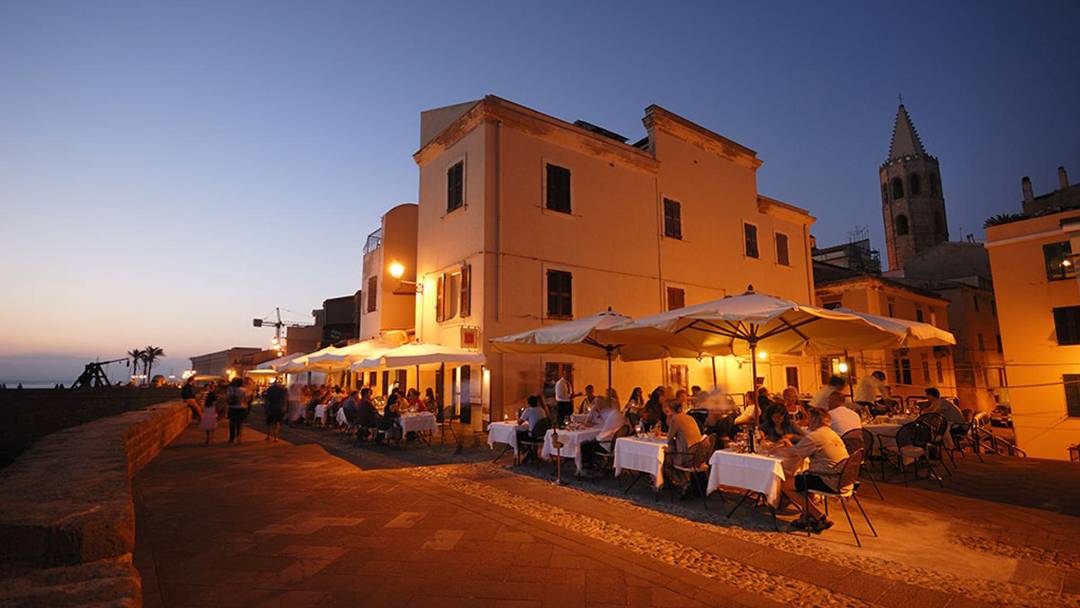 Following the ramparts takes you to the northern tip of the bastion, marked by a small domed watchtower. It is said there was once a bell above its roof which was sounded to alert the presence of incoming ships. The walls then junction, leading on to Bastioni Pigafetta and my favourite tower  – Torre della Polveriera. Perhaps my unashamed bias is due to its translation being ‘Powder Tower’. The name originating from its use as a gunpowder store and arsenal. This was a much later addition to the city’s defences, having been built in the mid-18th century. Here also can be found a series of arches which once acted as a gate to the historic harbour.

Next up is Torre di Sant’Elmo. This is a 16th century tower, though since the 1950s it has displayed the Stella Maris Madonna statue – a depiction of the Virgin Mary, described in ancient times as the ‘Star of the Sea’. Walking along the last expanse of ramparts, the Bastioni Magellano, there are opportunities to glimpse into the city’s narrow side streets – here are pastel-coloured townhouses with shutter blinds, and balconies with hanging baskets.

Reaching the medieval gateway of Porta a Mare signals the end of Alghero’s sea walls – less than a hundred yards from here is the Torre della Maddalena. This medieval tower became part of the Forte della Maddalena (the only surviving fort out of three built in the late 1500s). I knew it was important to familiarise myself with this historic land battlement, as well as the ice cream on offer at the bustling square of Piazza Civica. Known for its stylish shops and cafes – the Spanish Emperor Charles V is said to have stayed here in 1541 AD. 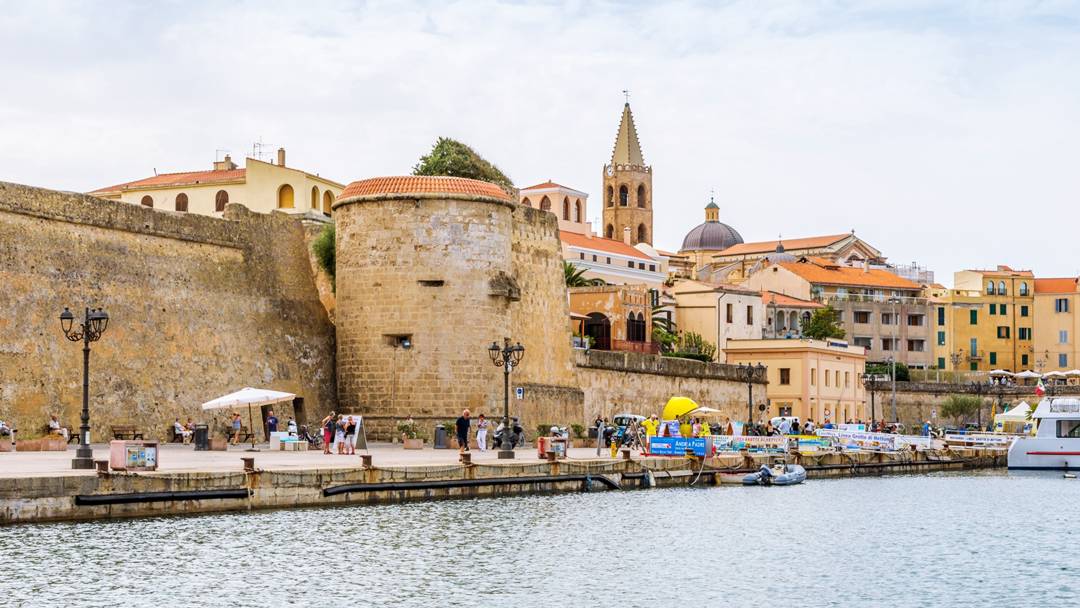 Not that it will be remembered in the history books, but this point is where my tour finishes. There is plenty more to see though. Just a little further on from Piazza Civica is the tower-come-museum Torre Porta Terra, and the tower of St. John –  from here you end up back at the start point (if circuits are your thing!). Also nearby can be found the coral museum Museo del Corallo di Alghero, which offers a fascinating insight into the city’s interaction with red coral from the past to present day. In my opinion, a trip to Alghero is not complete without walking its golden sea walls – so experience them for yourself, and everything else this unique city has to offer.

When you are done walking the walls, why not consider a Sardinian Cooking Class and Creating Your Own Four Course Meal. And then getting out of the city and exploring the north west coast of Sardinia on a Four Hour Secret Beaches Bicycle Tour. But for more archaeology and history sites and museums to visit, see our Sardinia page.