In the centre of Rome is the Capuchin Crypt – officially the Museum and Crypt of the Capuchin Friars, which is at once both shocking and fascinating. A series of small chapels beneath the church of Santa Maria della Concezione dei Cappuccini contain the bones and mummified remains of an estimated 4,000 individuals. Far from being a macabre spectacle, the Capuchin order believes the remains of former friars are a silent and poignant reminder of our mortality and the passage of life on Earth.

The information and details on this page was last checked and/or updated on 20 February 2022. 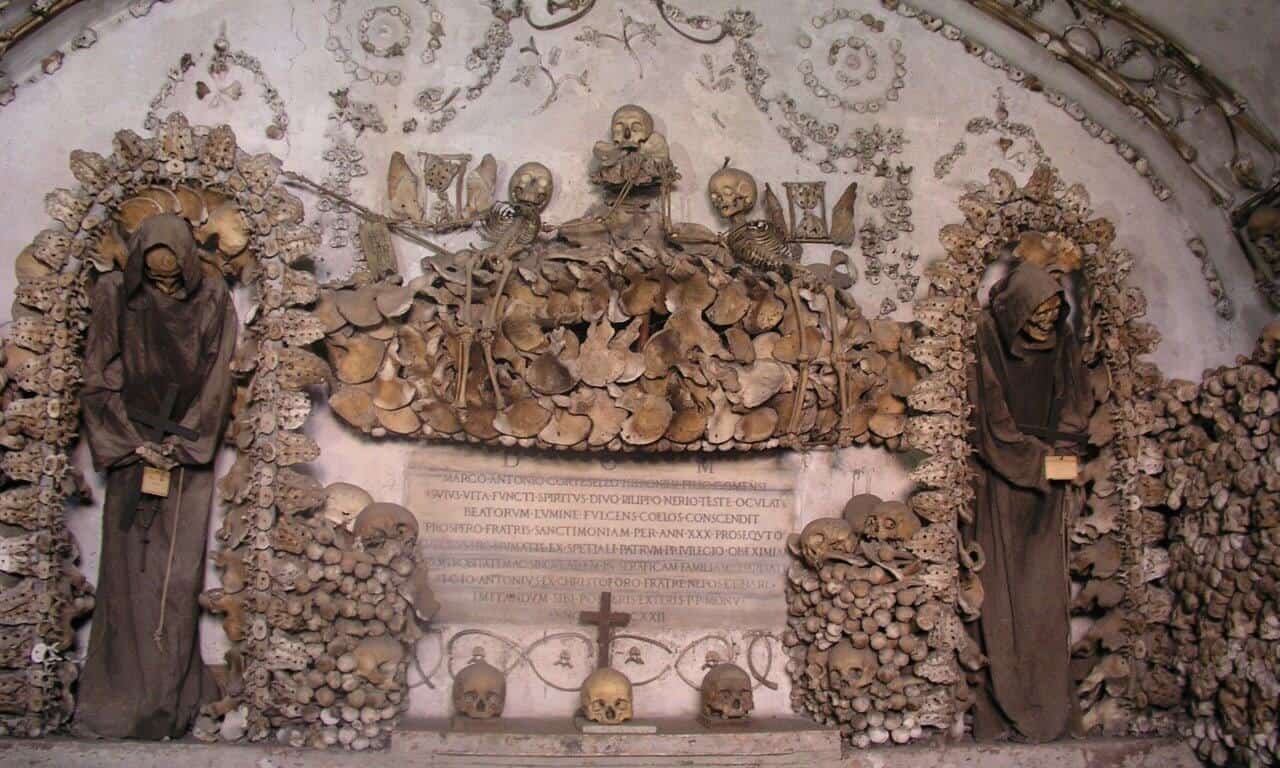 In the Crypt of Pelvises. Photograph © Dnalor 01

More than any other, Rome is a city dominated by its Catholic heritage. Visitors can scarcely turn around without coming upon a church, chapel, or cathedral. With such an amazing range of sites on offer, it can be difficult to decide how and where to spend your time and Euros. While the likes of St Peter’s Basilica and the Pantheon may pull in the largest crowds, there are many smaller, lesser known Catholic sites that are just as deserving of a visit – and in some cases a lot more memorable!

One of the most unique and impressive heritage sites in the city is the Capuchin crypt, also sometimes called the ‘Bone Church of Rome’. This is best known for its amazing ossuary, a collection of thousands of human bones that have been used in the elaborate decoration of the walls and ceilings. The crypt is situated beneath the Santa Maria della Concezione dei Cappuccini (‘Our Lady of the Conception of the Capuchins’), a 17th century church located along the city’s posh Via Venetto. Since 2012, the crypt has been accompanied by a smart new museum devoted to the history of both the Capuchins and the church itself.

Having climbed the external stairs to enter the church, head for the museum; devoted to the history and development of the Capuchin Order. For those who know nothing about the group – except perhaps that they gave their name to a species of New World monkey – you will certainly be enlightened here.

The Ordo Fratrum Minorum Capuccinorum (Order of Friars Minor Capuchin) was established in sixteenth-century Italy by Matteo Bassi. He was a Franciscan friar who felt that the order had drifted away from the humble practices of Saint Francis. To this end, in the 1520s he created the Capuchins as a reformist movement whose members devoted themselves to solitude and penance. The early Capuchin Order faced much hostility and Bassi himself returned to the Franciscans, but despite these setbacks it managed to not only survive but thrive.

Somewhat ironically for a group emphasising poverty and simple living, the Capuchin Order built this church using money and land donated by some of Rome’s wealthiest elite families. Commissioned by Pope Urban VIII, it was designed by the architect Antonio Casoni and built between 1626 and 1631. Its construction was a clear sign of how far the Capuchins had come over the preceding century. It has remained under the Order’s control ever since.

The museum provides a potted history of the Capuchin community illustrated using a wide range of artefacts associated with the group, including vestments, manuscripts, and reliquaries. Several paintings are also on display, most notably ‘St Francis in Meditation’, a work attributed to the ‘Old Master’ Caravaggio. The Capuchins seek to remind the visitor that they are not merely a curio from Europe’s early modern period but a living fraternity with members scattered across the globe. To this end, the museum’s final rooms contain biographical overviews of prominent Order members and the humanitarian projects that they are engaged in. 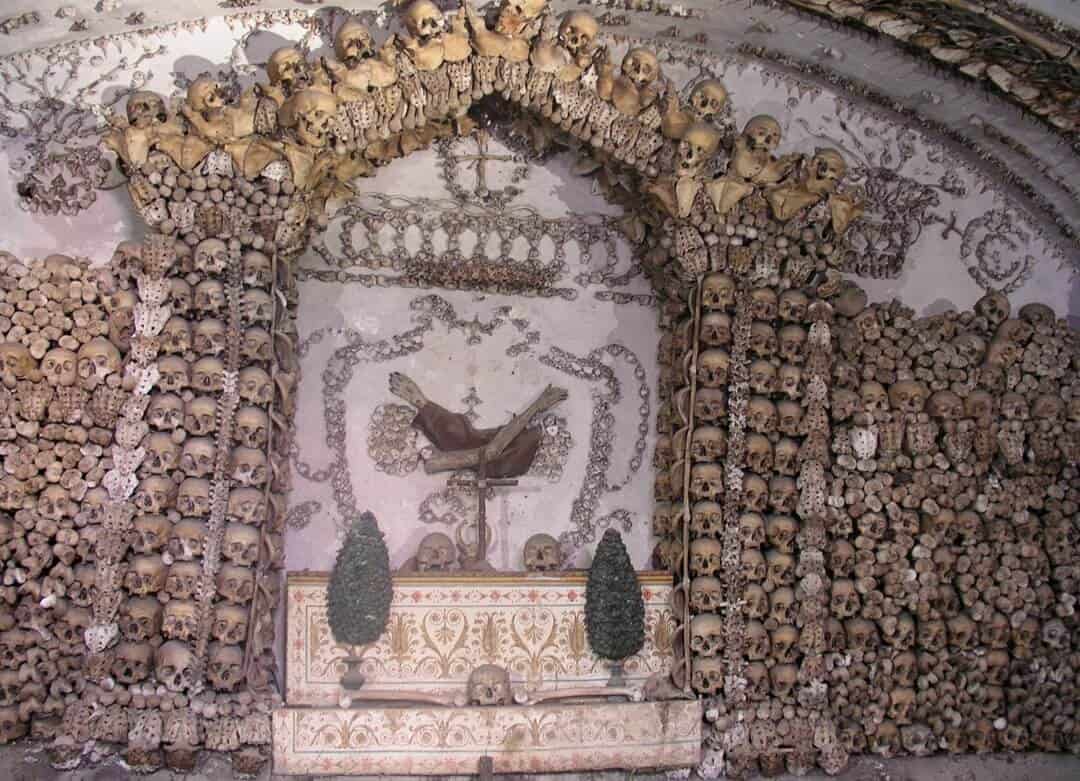 Two severed, mummified arms cross one another to make the form of the Capuchin’s coat of arms. Photograph © Dnalor 01

To get to the main attraction, the crypt and its ossuary, you have to go through the museum. The crypt itself consists of a corridor passing through six consecutive rooms lit only by small windows and dim electric candles. While one of these rooms, a chapel, has no human remains on display, the other five are filled with thousands of human bones, elaborately stacked against the walls, organised into enchanting Baroque patterns. And even crafted into chandeliers. In all, the remains of around four thousand individuals are present.

The five rooms are given such evocative names as the Crypt of Skulls, the Crypt of Pelvises and the Crypt of the Leg Bones and Thigh Bones. Not everything on display is bare bone. In one room, two severed, mummified arms cross one another to make the form of the Capuchin’s coat of arms. Several rooms also contain robed and hooded figures, their darkened, desiccated skin still clinging to their skulls.

Mystery shrouds the origins of the ossuary. When the Capuchins moved to this site in the 1630s they brought with them the bones of many of their dead that had previously been stored at a convent in the nearby Santa Croce e San Bonaventura alla Pilotta. At what point – and why – somebody then decided to start transforming the collection into this artistic marvel is not known. The earliest written record of the ossuary comes from 1775, when it attracted the attention (and admiration) of a notorious French libertine, the Marquis de Sade. By this point it had developed into something of a tourist attraction, a status it has retained ever since. The addition of new bones may have continued until the early nineteenth century, when the burial of human remains within the city walls was criminalised.

The Order emphasises that the ossuary should be understood as a space in which the visitor can reflect on their own mortality – and thus on the need to atone for their sins. While this overtly Catholic message is to be expected, this is a place that can surely be appreciated for its intrinsic artistic merit and historical interest by members of any faith or none.

As befitting the mood of such a place, most visitors keep their voices hushed to a whisper, and photography is strictly forbidden. In such an evocative and atmospheric place, the visitor’s experience will no doubt be a personal one and many different emotions might come to the fore. For some, it may be a disquieting or even frightening experience. Others will find it deeply touching. Fundamentally, it is a place that appeals strongly to the morbid curiosity of the human imagination.

On emerging from the crypt, one immediately enters the usual gift shop, where trinkets, books and postcards are available for purchase.

Visiting the Museum and Crypt of the Capuchin Friars

The church is situated on the Via Venetto, a couple of minutes’ walk from the Piazza Barberini with its impressive Triton Fountain by Bernini. The nearest transport link is the Barberini – Fontana di Trevi station, which is on Line A of the Rome Metro. As the station’s name suggests, the popular Trevi Fountain is only a short walking distance away. A visit to the Crypt can easily be combined with a trip to this and many other of central Rome’s historic sites.

At the time of writing, entry is €8.50 for adults and €5 for those under 18 or over 65. This fee provides entry to both the museum and the crypt. Unfortunately, no concession is available for students, and nor is the site part of the Rome’s Roma Pass which allows reduced entry to many of its heritage sites.

Given that the museum and crypt are within the bounds of a church and are managed by the Capuchin Order, those deemed to be dressed in an immodest manner will not be permitted entry. Even if it is a sweltering hot day, make sure that you wear trousers rather than shorts and that your shoulders are covered.

The convent does run its own tours, in English, Italian and Spanish, for a cost of €65. These have to be booked two weeks in advance. 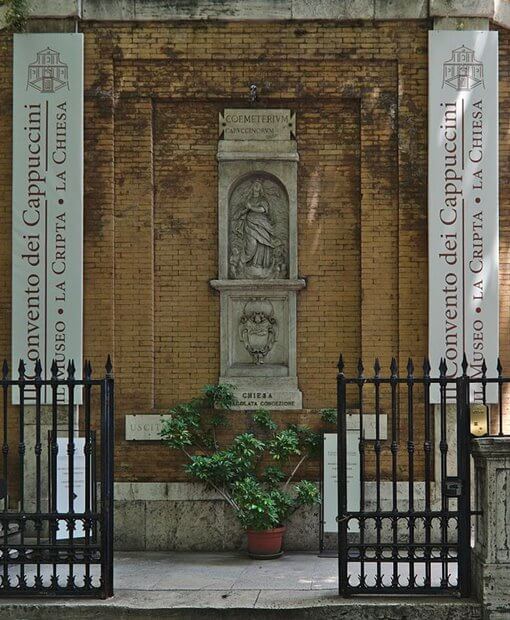 The entrance off the street, turn left or right and climb the stairs to the church. Photograph © СССР

Where is the Museum and Crypt of the Capuchin Friars

The entrance to the church for the museum and crypts is about a two minute walk from the Barberini Metro station (Line A).

What are the opening hours?

Can you buy tickets online?

No. Tickets are only available at the ticket office in the church.

Can you buy tickets in advance?

Like the Catacombs in Paris, the Capuchin Crypt has become a very popular attraction in Rome. Although it is not possible to buy an advance ticket from the Capuchin Convent, if you want to buy a ticket in advance and avoid standing in queues you will need to reserve place on a guided tour.

There are two options: GetYourGuide and Tiqets both offer skip-the-line tickets with a guided tour, and you can cancel your reservation up to 24 hours before the start of your tour and get a full refund. GetYourGuide’s tour lasts an hour, whereas Tiqets is 45 minutes.

Can you buy skip-the-line tickets for the Crypt and Museum without a guided tour?

Is there a dress code to visit the Capuchin Crypt?

Yes, appropriate clothing is required. This means that shoulders and knees must be covered – no sleeveless shirts.

How long do you need to visit the Museum and Crypt?

Although the last ticket are available 30 minutes before the chapels close, 30 minutes would be a very quick visit. To take in the museum and the different chapels, anywhere from an hour to and hour and a half will be sufficient.

Guided Tours of the Capuchin Crypts

Although the church does arrange its own guided tours, these have to be booked at least two weeks in advance. There are a few tour guides who offer guided tours of the museum and crypts. With a guided tour there is no standing in the queues.

The Capuchin crypts at the Santa Maria della Concezione dei Cappuccini also feature in a Guided Tours of the Crypts and Catacombs of Rome. And for 54€ you can get a guided tour of the museum and crypt and enjoy a choral concert in the Basilica of Santa Maria Immacolata.

Visiting Rome? If you are planning a trip to Italian capital, check our Recommended Must See Things to See and Do in Rome.