Step back in time in Laterza’s Marquis Palace, strategically situated overlooking one of the deepest ravines in Europe and housing a collection of pottery the value of which is measured in millions. 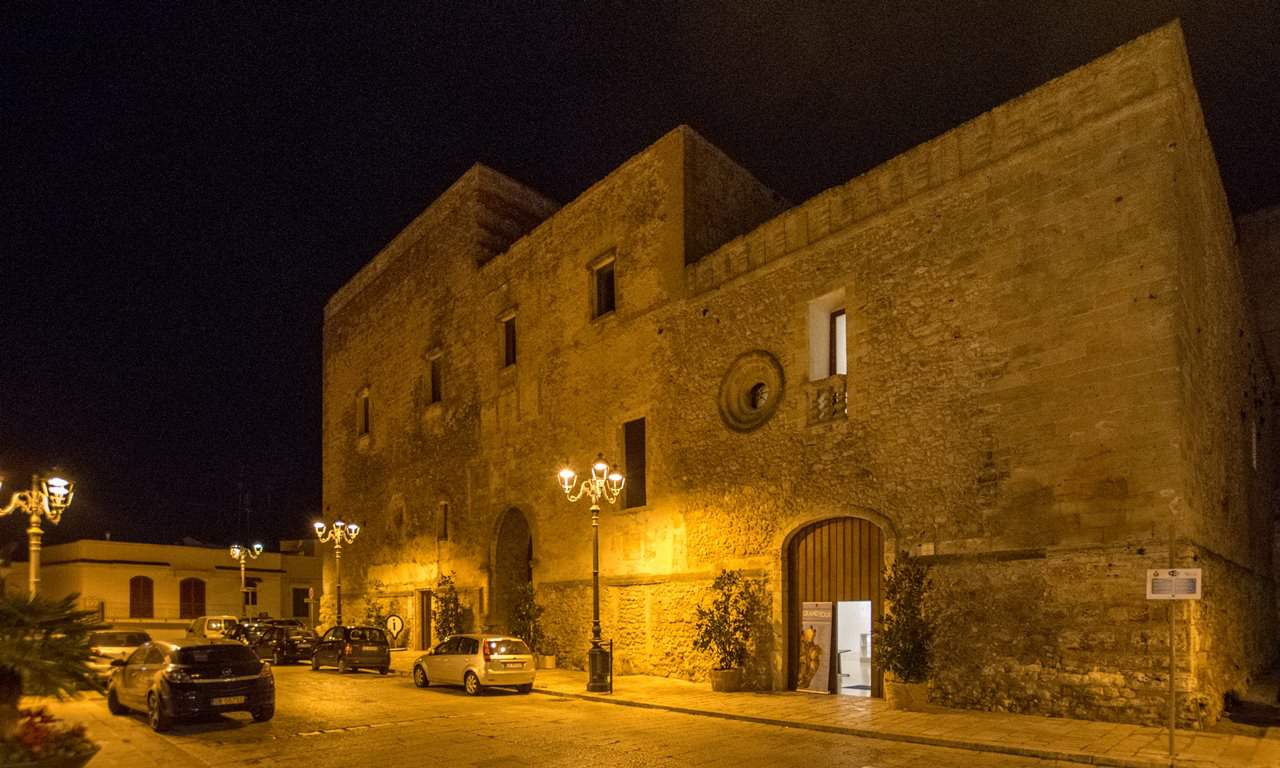 The southern façade of Palazzo Marchesale with its distinctive late Renaissance features.

At the heart of Laterza’s centro storico stands the imposing Palazzo Marchesale. According to an inscription on a stone capital at the entrance, it was built in 1393 by Giovanni and Angel Triggiano. The impressive building we see today has changed much over the centuries; in both appearance and function.

Towards the end of the 14th century many of the towns in the Kingdom of Naples (much of southern Italy, including Puglia) were at war with each other. Laterza was under attack from Matera to the west and Castellaneta to the east. It was because of these conflicts that a castle was built in Laterza, which was already nearly fully surrounded by a deep ravine.

Besides the natural protection of the ravines, the northern aspect of the castle was protected by a moat and drawbridge. In places the crenellated walls have survived, as has a tunnel south to the ravine that offered access to the castle from the ravine, or a means of escape to the ravine.

Very noticeable is how much of the building has been built using rough stones, contrasting markedly with some parts (the corner of the building to the right in the photograph above, for example) where quite regular, cut stone has been used. The rough stone relates to the Renaissance remodelling of the castle into a palace.

In 1546 the Neapolitan Giovanni Battista I D’Azzia became Marquis of Laterza. And it was he who had the castle renovated into a residential building, or Palazzo. Again an inscription at the entrance suggests this work was completed by 1548. While the eastern façade has undergone many changes over the centuries, it is on the southern façade (pictured above) where many of the Renaissance features have survived. Note the small balcony; it was from here that the Marquis would communicate to the population of Laterza. On the northern you can see the barred, prison windows.

One of the highlights of the castle is surely the fresco painted on the interior wall above the eastern entrance. The fresco depicting Saint Anne was painted sometime between the end of the 18th century and the start of the 19th century. It was commissioned by Anna Capece, who was the wife of Nicolò Perez-Navarrete, a Spanish nobleman who served as the last Marquis of Laterza until 2 August 1806. 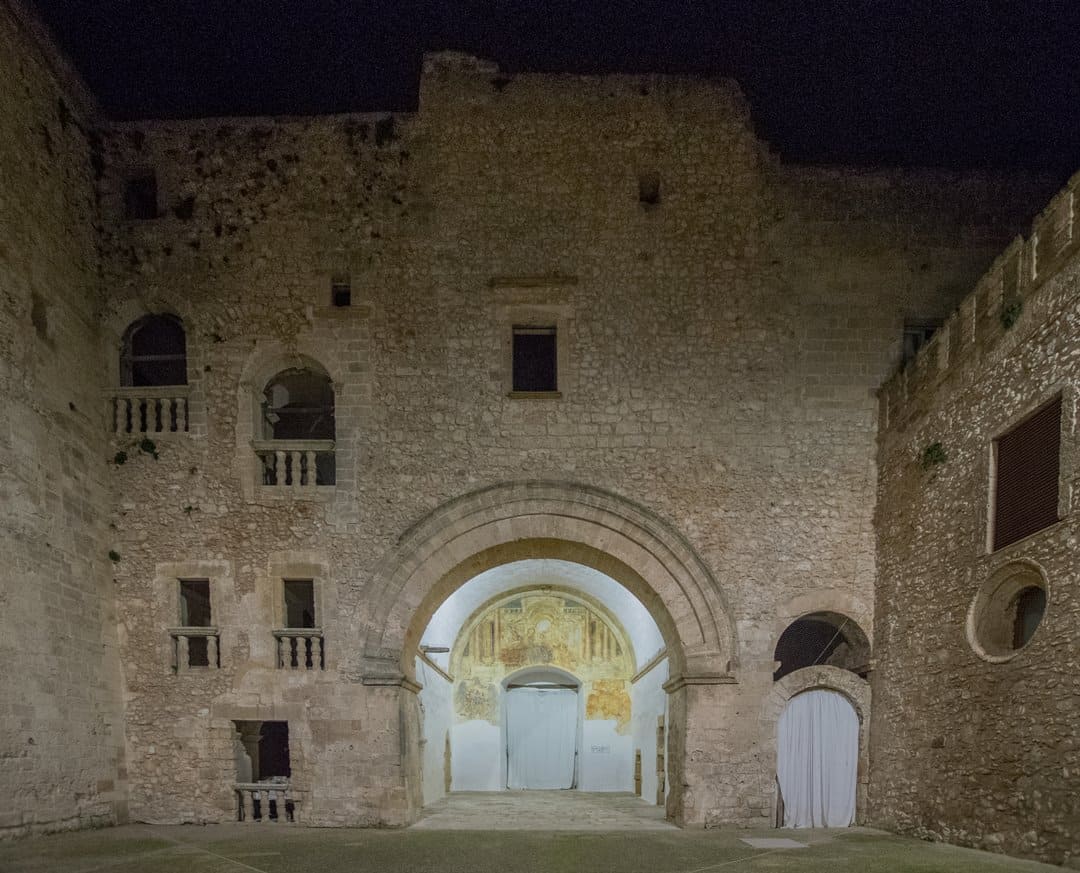 Inside the courtyard of the Palazzo Marchesale, looking to the eastern entrance. 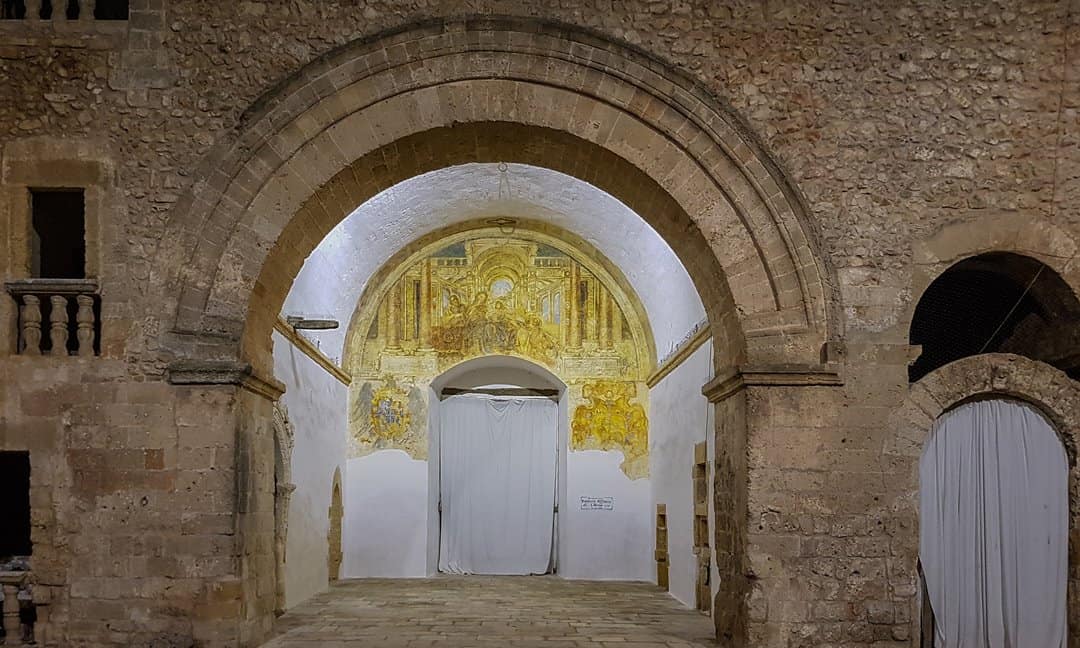 The entrance to the Castle and Palazzo, from the inside. Beyond the door (behind the white cloth) would have been the castle’s drawbridge, which was removed when the castle was refurbished in the mid 16th century. 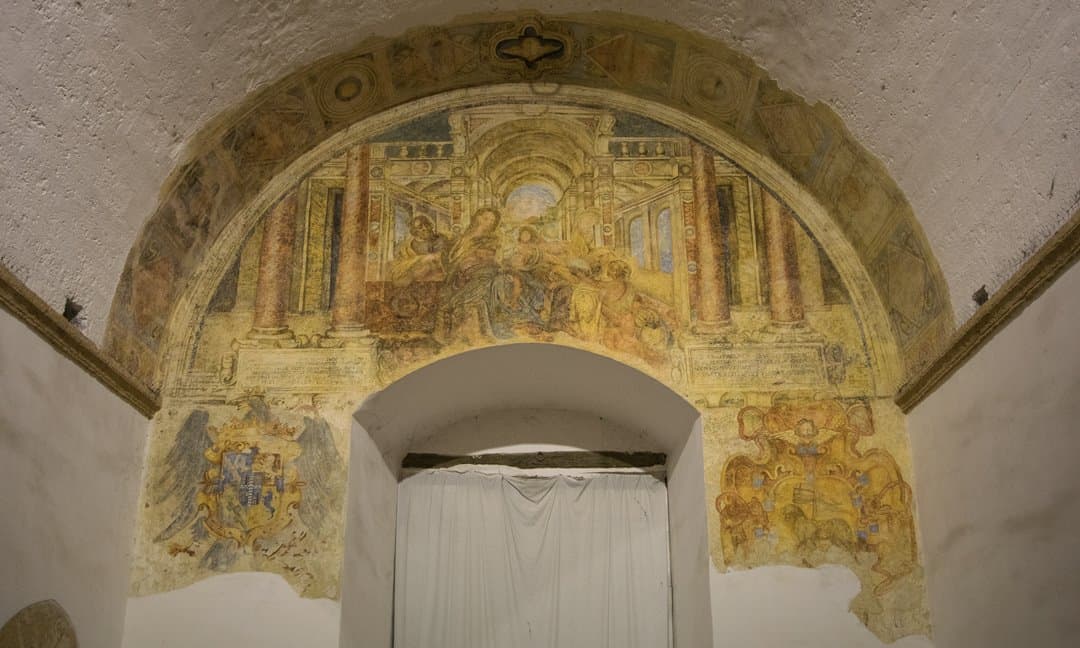 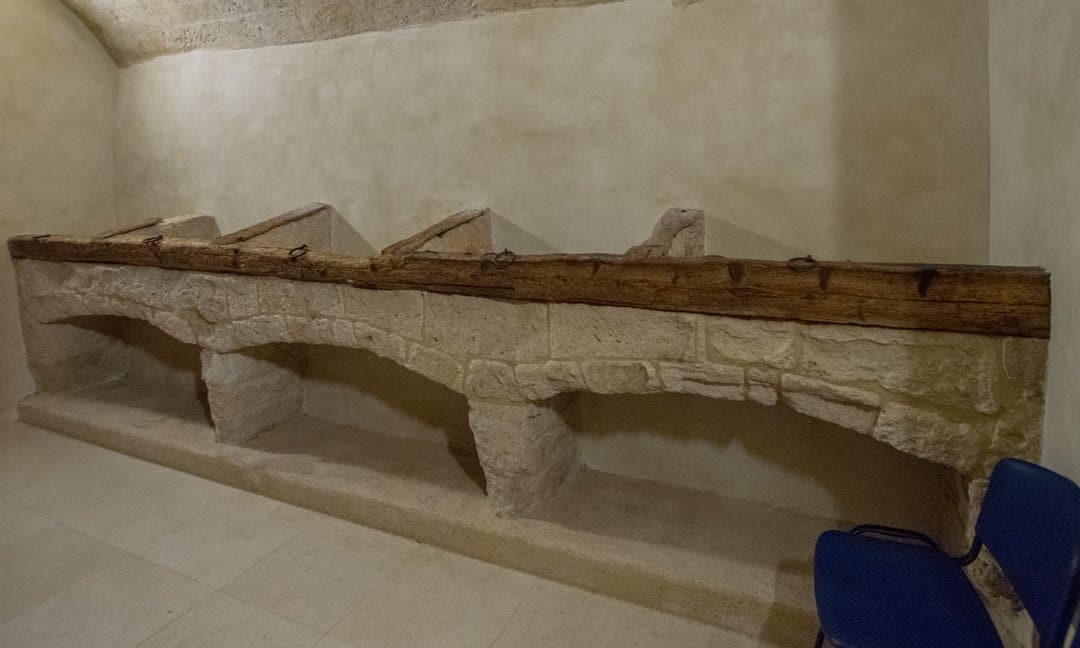 Parts of the castle that are accessible to the public have been sensitively restored. And many of the original features have been preserved.
For example, in the toilets the mangers (presumably for horses) can be seen.

A Good Place to Start Exploring the history of Laterza 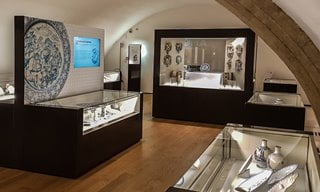 The 17th century castle was given a new lease of life recently, and is once again a focal point for Laterza. Whereas once it was the political focus of attention, today it is a vibrant cultural centre. On the ground floor, at the entrance to the castle is Laterza’s tourism office, Info Point Laterza. This is where you go to sign up for a variety of guided tours and experiences on offer in Laterza. Also, in beautifully restored vaulted rooms on the first floor is an extraordinary collection of local pottery, Museo della Maiolica. Maiolica from Laterza has a distinctive decoration applied in light blue, orange and yellow on a white background. Apparently the collection is insured for over four million Euros! 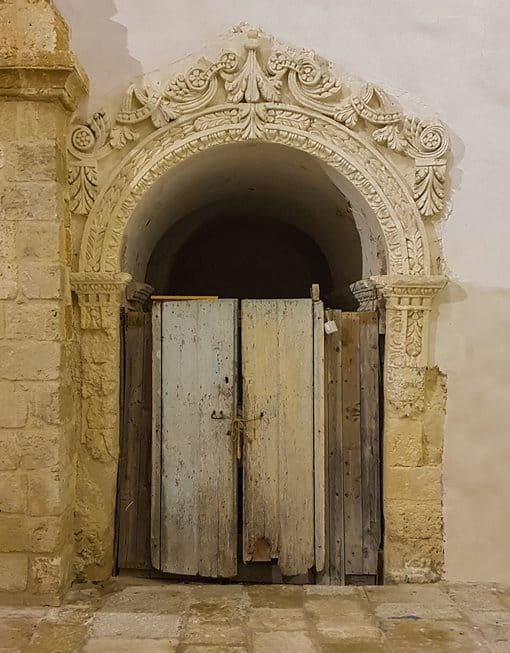 An elaborately carved archway in the entrance.

In what was the Palazzo’s stables is today the tourist office of Laterza: InfoPoint Laterza. Behind the tourist office are the toilets in which you can see the retored mangers (photograph above). Besides being able to buy your entry tickets to the Palazzo Marchesale, and the Museo della Maiolica di Laterza, this is where you come for all the information you require during your visit and/stay in Laterza. The office manages a number of different walking tours in around Laterza, as well as a variety of activities. See their Website (in both English and Italian) for further details. They are also active on social media, including Instagram and Facebook.