Rome’s Arch of Janus is a quadrifons arch on the edge of what was the Forum Boarium, opposite the church of San Giorgio in Velabro. Little is known about this four-sided, four-arched structure, thought to have been built in the 4th century AD. Since 1993 the arch has been inaccessible, surrounded by a fence. Following excavations and a high profile restoration programme, from mid November 2021 this enigmatic monument will once again be open to visitors.

The information on this page was last checked and/or updated on 2 April 2022. 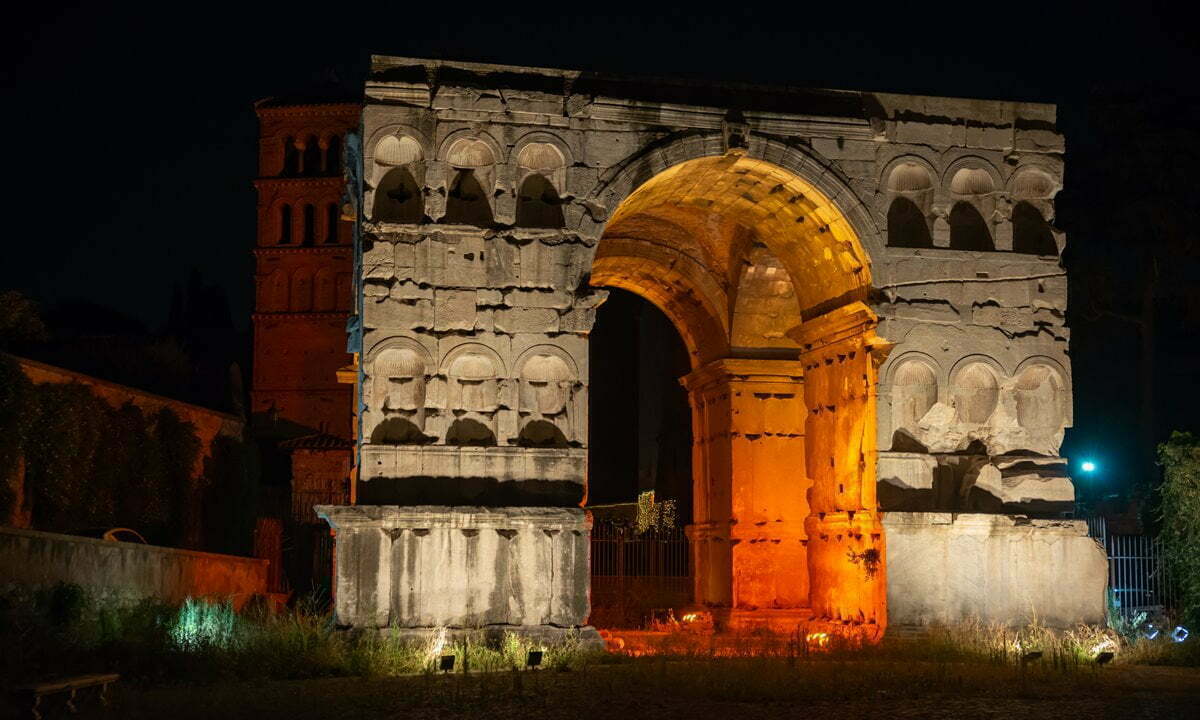 The Arch of Janus or Arco di Giano, in Italian.

Since a car bomb exploded outside the Church of Saint George in Velabro (one of a series of coordinated explosions in Milan and Rome around midnight on 27 July 1993) the Arch of Janus has been closed to the public. With a number of people wounded and considerable damage to the church, a fence was erected around the monument. Now, 28 years later the Arch of Janus is open to the public again.

Restoration of the Arch of Janus

In 2016 the Arch of Janus was added to the Watch List of the World Monuments Fund (WMF). Together with American Express, the WMF made a substantial award to the city of Rome for the restoration of the Arch of Janus. Now restored, the Soprintendenza Speciale Roma working with other Italian institutions including the Fondazione Alda Fendi – Esperimenti (with their base overlooking the monument) will be promoting the Forum Boarium; its place in the history of Rome and a site of contemporary art experiment.

The Arch of Janus is the last monument of the Forum Boarium to be restored. Previous monuments being the two nearby temples of Hercules and Portunus. Read more about the restoration of the arch, and the work of the WMF here. In particular, don’t miss the bilingual brochure, a pdf of which can be downloaded free of charge: Arco di Giano al Foro Boario/Forum Boarium’s Arch of Janus. 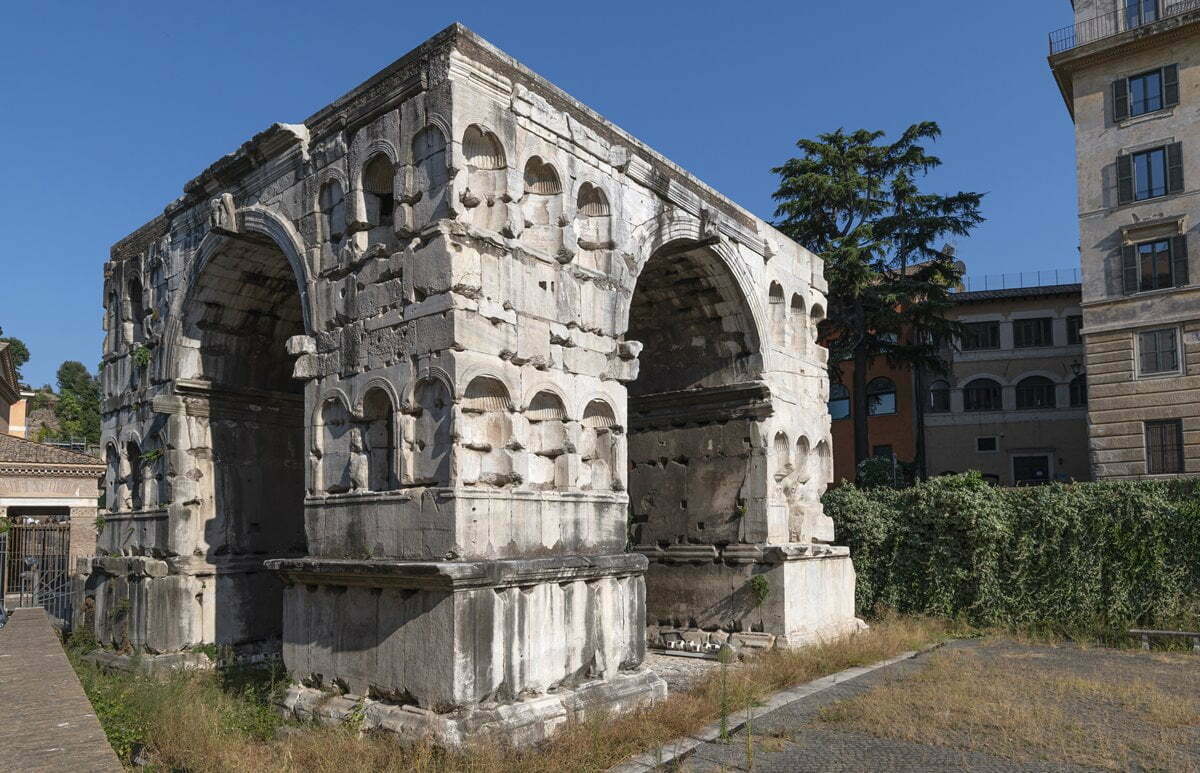 The Arch of Janus before being restored, with the Palazzo Rhinoceros (the base of the Fondazione Alda Fendi – Esperimenti) on the edge of the photograph to the right.

History of the Arch of Janus

Triumphal arches are thought to have been invented by the Romans. Certainly Rome has some exceptional examples that have provided inspiration for copies in cities around the world. Three of the most well known being the Arch of Septimius Severus (at the north east end of the Roman Forum), the Arch of Titus (on the Via Sacra at the south east end of the Roman Forum) and the Arch of Constantine (next to the Colosseum). And the Arc de Triomphe in Paris is probably one of the nest known modern creations.

The Arch of Janus is the only surviving four-sided, four-arched ancient structure in Rome. Unfortunately very little is known about the arch.

Although thought to be a triumphal arch, it is highly unlikely that the Arch of Janus is such an example. Or that it was dedicated to Janus. That the monument has the appearance of a relatively straight-forward free-standing arch today is in fact a result of early 19th century misconceptions about what the structure looked like when it was built.

Of the two historic engravings above, the one on the right from 1833 shows the arch essentially as we see it today. The representation on the left shows what it looked like before 1829, at least. Sometime during the medieval period the arch became the base of a fortified tower. The earliest recorded document of the tower is from 1145, when in the hands of the Frangipane family. And the tower is still present in historic engravings of the arch up until the early 19th century.

Sometime between 1827 and 1830 what remained of a medieval tower was removed. During this process an attic that had been a part of the Roman arch was also removed. The attic was thought to be medieval not Roman. The presence of a staircase in the north west pier suggests that there was more to the original, Roman structure than we see today.

Already in the early 19th century then, there was a perceived view of what the arch should look like, a triumphal arch. 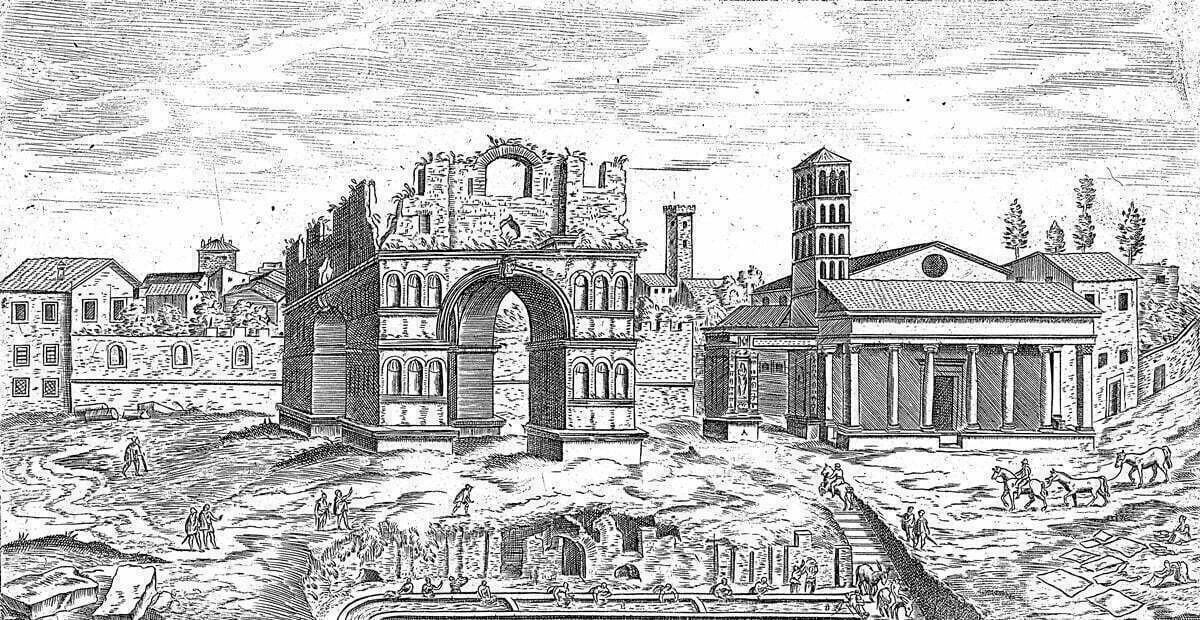 An engraving of the Arch of Janus by Etienne Duperac made in 1575. To the right of the arch is the church of San Giorgio in Velabro.

The arch was built at the north east edge of the Forum Boarium. Although overlooked by visitors now in favour of the Republic and Imperial Forums, the Forum Boarium was an important meeting place in the city of Rome. Read more about this area and what you can see today in our Self-Guided Tour of the Ancient Mercantile Fora on the Banks of the Tiber River.

Until the 6th century BC the area between the Capitoline and Palatine Hills and the Tiber River was nothing but a marsh. By constructing a large drain (the Cloaca Maxima) the Romans were able to reclaim the marshland. Over time the area became an important meeting place for merchants. The many temples suggest the area was not just a focus of commercial activities but also a religious meeting place.

The last building at this end of the Forum Boarium was the arch. Given the forum had become a major crossroad in Rome, it is more likely the arch marked the crossroad and served as a meeting place.

You might think that the name Janus refers to the two-faced god Janus. Historians now believe the name Janus comes from the Latin term ianus, which means a covered passage or door.

As the arch is referred to as Arcus Divi Costantini in 4th century AD Roman Regionary Catalogues, rather than being a triumphal arch it was probably a honorary dedication to Emperor Constantine. 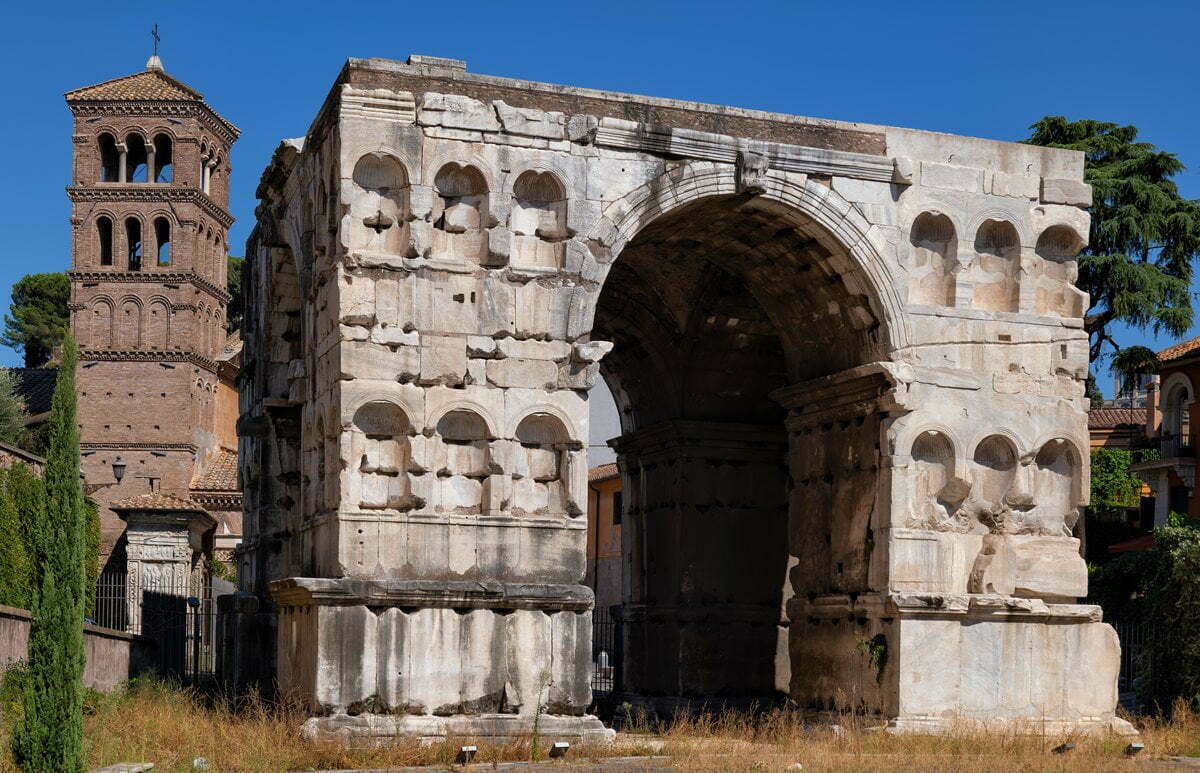 The tower of San Giorgio church can be seen behind the Arch of Janus.

Brief Description of the Arch of Janus

The arch was made using both new stone and old stone taken from other buildings, the later process known as spoliation (read about the Re-use of Roman stone from Hadrian’s Wall). In his account of visiting the arch during its restoration, John Darlington, Executive Director of World Monuments Fund Britain, writes “in places, the erosion is so severe that some of the current repairs have revealed the sides and backs of stone blocks showing that they were once lintels, architectural or sculptural mouldings recycled from elsewhere.” The arch has a core made largely from brick, which was then encased with marble blocks.

The arch is 12 m by 12 m, and 16 m high. Each side of each pillar has two rows of three niches, a total of 48. The niches with their semi-circular, shell-shaped vaults would almost certainly have held statues, but none of these have survived or been recovered during excavations. The keystones of each of the four arches are decorated with seated figures of Roma and Juno, and standing images of Minerva and possibly Ceres. For a more detailed description of the arch and its history, read Marco Paronuzzi and Laura Zanchetta’s 2008 article in the online journal Engramma.

Visiting the Arch of Janus

Where is the Arch of Janus?

The Arch of Janus can be found between the Circus Maximus and the Temple of Portunus, on the Via del Velabro just opposite the Church of Saint George in Velabro.

Find the monument on an interactive map of Italy or the Roman World.

Free admission to all. 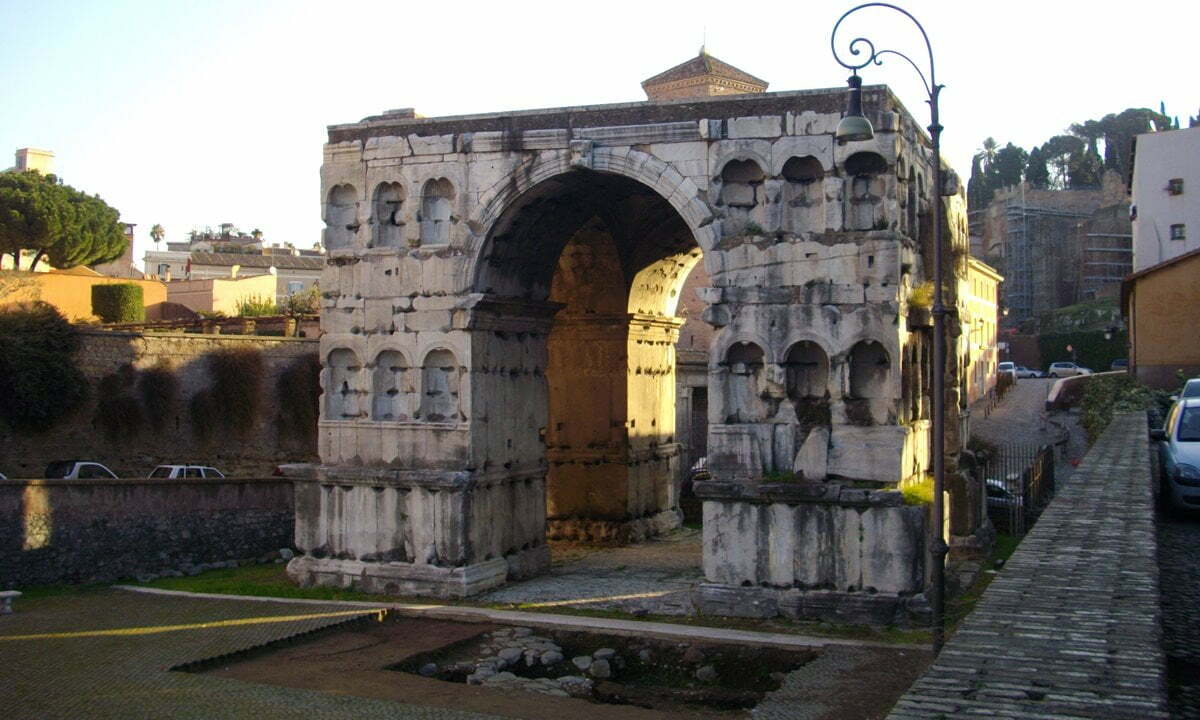 Excavations at the base of the monument, 2014.

Visiting Rome? If you are planning a trip to Rome and looking for a self-guided tour that starts at the Arch of Janus, check our Self-Guided Tour of the Ancient Mercantile Fora on the Banks of the Tiber River.