The Parthenon Marbles in the Louvre

While the British Museum tends to get all the attention in debates and discussions about the return of the so-called Elgin Marbles to the Acropolis Museum in Athens, there are also Parthenon ‘marbles’ in the Louvre. There are only two pieces on display, and in the vastness of the Louvre and its enormous Classical collection they are easily missed. 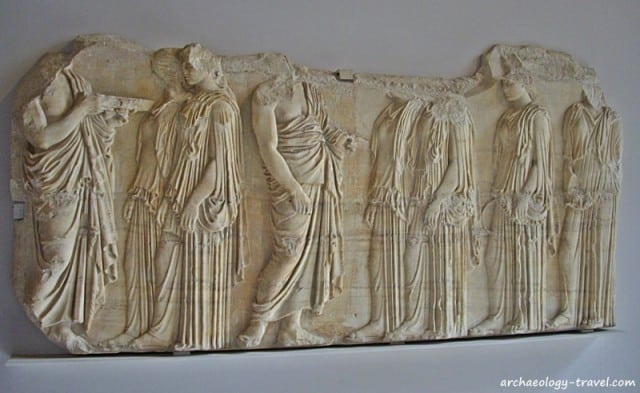 The ‘Parthenon marbles’ is a collective term that has been applied to various sculptures made from marble that once adorned the Parthenon on the Athenian Acropolis. They include sculptural elements that made up the east and west pediments, a frieze that ran around the inner chamber of the Parthenon (the cella), and a series of panels or metopes that ran around the outside of the Parthenon. Together these sculptures are considered some of the finest examples of Classical Greek art. They are certainly the most famous, principally because towards the end of the eighteenth century Lord Elgin removed many of these from the Acropolis and took them back to England – and they are now on display in the British Museum in London. These sculptures, once called the ‘Elgin Marbles’, are at the heart of one of the most significant cultural debates of our times – should these sculptures be returned to Athens.

Every now and then the Parthenon marbles debate makes headline news. Usually when someone with a high public profile offers their opinion. Earlier this year George Clooney and other well known Hollywood actors entered the fray making their support for the return of the Parthenon sculptures to Athens quite clear. Many of these interventions come and go; but that was not the end of Clooney’s involvement. At the end of September Clooney married Amal Ramzi Alamuddin, an internationally respected, London-based British-Lebanese lawyer. The human rights lawyer has not wasted much time in taking up the baton, and recently met with the Greek Minister of Culture to discuss that country’s legal options.

As a long-time supporter of the repatriation of the Parthenon sculptures to Athens, I hope Amal Alamuddin Clooney working with Geoffrey Robertson and Norman Palmer – two British QC’s with expertise in cultural restitution – succeed in resolving the World’s most celebrated cultural debate. Sadly, it is probably not yet time to hold our breaths. Britain has characteristically not responded to any requests for mediation. As central as Britain and the British Museum are to this issue, we do well to remember that other European museums also have pieces from the Parthenon in their collection: the Louvre Museum, the Vatican, Denmark’s National Museum, the Kunsthistorisches Museum in Vienna, the University Museum in Würzburg and the Glyptothek in Munich.

Whether or not the fragments in these other European institutions ever get mentioned in discussions is not reported, nonetheless they should all be returned to Athens. The acquisitions of these other pieces is as problematic as Britain’s acquiring of the ‘Elgin Marbles’. And this is certainly the case with the Parthenon sculptures now in the Louvre. Besides a few fragments of metopes, the Louvre has one of the 114 blocks that made up the Parthenon’s frieze and the tenth metope from the Parthenon – both of which are currently on display.

History of the Parthenon Marbles in the Musée du Louvre

No one disputes that the history of the Parthenon is a turbulent one – it has been a site of political contest for centuries, and still is. Not surprisingly then the Louvre, like the British Museum, focuses on this troubled past to justify why the sculptures come to be in Paris – and more importantly why they should stay there. The rights and wrongs of this aside, what is clear from this history is how the Acropolis, as with other ruined ancient sites in the eastern Mediterranean, were the playgrounds of British and French officials competing with one another to acquire the best antiquities.

In various official accounts, specific details explaining how the fragments come to be in the Louvre’s collection are contradictory. But the general story goes that the pieces were excavated in 1788 and 1798 at the Parthenon by Louis François Sébastien Fauvel, who working for the French Ambassador to the Ottoman Empire, the Comte de Choiseul-Gouffier, with the permission of the Turks. On their return to France, a metope and a single block from the frieze were seized by revolutionaries in 1792 as being the property of an Aristocrat. When Choiseul-Gouffier was allowed to return to France, the metope was returned to him but the block from the frieze was put on public display in the Louvre sometime in 1798.

The ship carrying another metope en route for France was intercepted by the British. The object was taken to England where it was subsequently bought at auction by Lord Elgin. Elgin and Choiseul-Gouffier were known to be competing with each other for artefacts from the Acropolis. Elgin is said to have returned the metope to Choiseul-Gouffier. Other accounts suggest it went to the British Museum in 1816 along with the numerous pieces that Elgin acquired himself. And often these accounts are conflated into an impossible scenario.

Whatever the actual turn of events, records in the Louvre show that the tenth metope was bought in 1818 at the auction of Choiseul-Gouffier’s personal collection following his death in 1817.

The Parthenon Frieze in the Musée du Louvre

When complete the Parthenon frieze was 160 metres in length (114 blocks each about 1.21 metres), depicting two parallel lines in procession. The single block in the Louvre (photograph above) is from the right of the frieze on the eastern side of the temple. The bodies of the two male and six female figures are quite well preserved, all but three female figures have lost their heads. This blocks depicts the point where one of the two processions are coming to an end, and male marshals can be seen receiving the women. 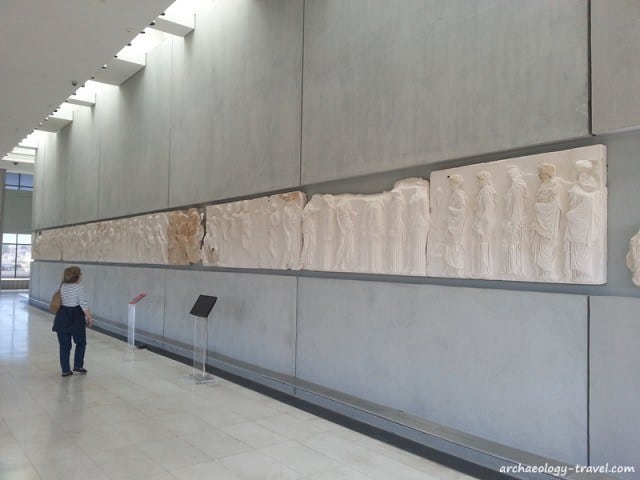 The Louvre block flanked by blocks now in the British Museum.

The Parthenon Metope in the Louvre

The metopes on the southern wall of the Parthenon tell the story of the battle between Centaurs and Lapiths that started at the Lapith King’s wedding feast. As with many ancient myths, there are different versions why the battle broke out. One version blames drunk Centaurs, while another suggests that the Centaurs were angry at having been excluded from the festivities. Either way, the Centaurs fought with the Lapiths and attempted to abduct the Lapith women. Centaurs are readily identified with their human torsos, arms and heads, as well as the body and legs of a horse.

The metope in the Louvre, the tenth metope on the southern side of the Parthenon, shows a now headless Centaur abducting a Lapith woman – also headless. A fragment of the Centaur’s right arm has been recovered since the metope let the Acropolis for France, and can be seen in the Acropolis Museum attached to a reproduction of this particular metope. 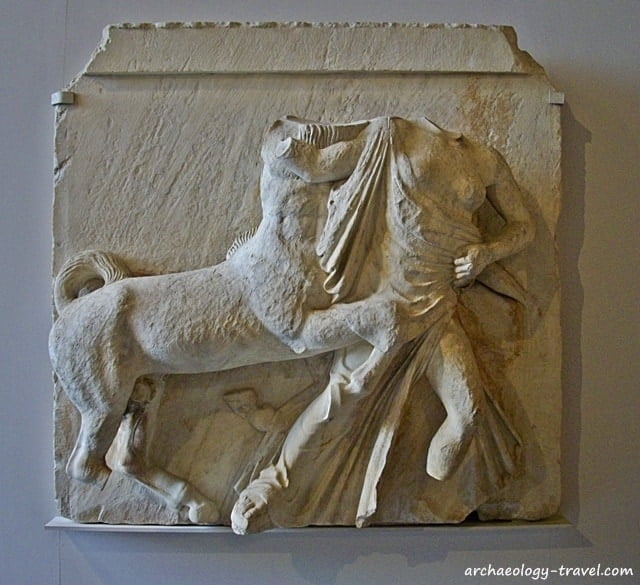 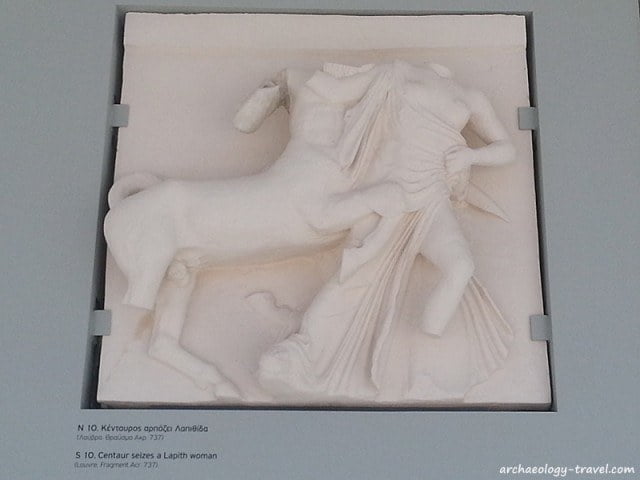 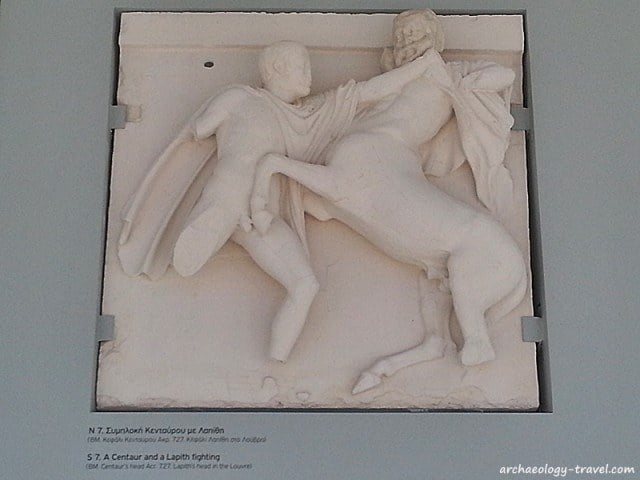 The seventh metope on the south side depicts a Centaur fighting with a Lapith man. This particular metope today is a powerful reason why I think these all the sculptures from the Parthenon should be reunited in Athens. The bulk of the metope is in London, the head of the Lapith is in Paris and the head of the Centaur is in Athens – and can be seen on the reproduction of the metope in the Acropolis Museum.

As an archaeologist with a research and teaching expertise in prehistoric and ancient arts, I am still searching for a rational explanation why anyone thinks these three fragments of the same metope should continue to be separated. Piecing together fragments of the past, physically as well as intellectually, is one aspect of the archaeological enterprise. One that should be celebrated and facilitated, not thwarted and denied.