Visiting Altamira: the Cave, the Replica and the Museum

After being accessible to researchers and conservators only, the cave of Altamira was once again available for ordinary members of the public to visit from February 2014. Each week five lucky visitors to the Museum of Altamira were chosen at random, kitted out in special clothing and given a 37 minute tour (in Spanish). Then 2020, and both the cave and the replica were closed to all. The replica has re-opened, and from 15 August five lucky people from the waiting list will be given the 37 minute tour.

(The museum and replica re-opened on 9 June 2020, the weekly visits for five people in to the original Altamira Cave resumed on 15 August 2020. These are for waitlisted people only)
The information on this page was last checked and/or updated on 22 February 2022 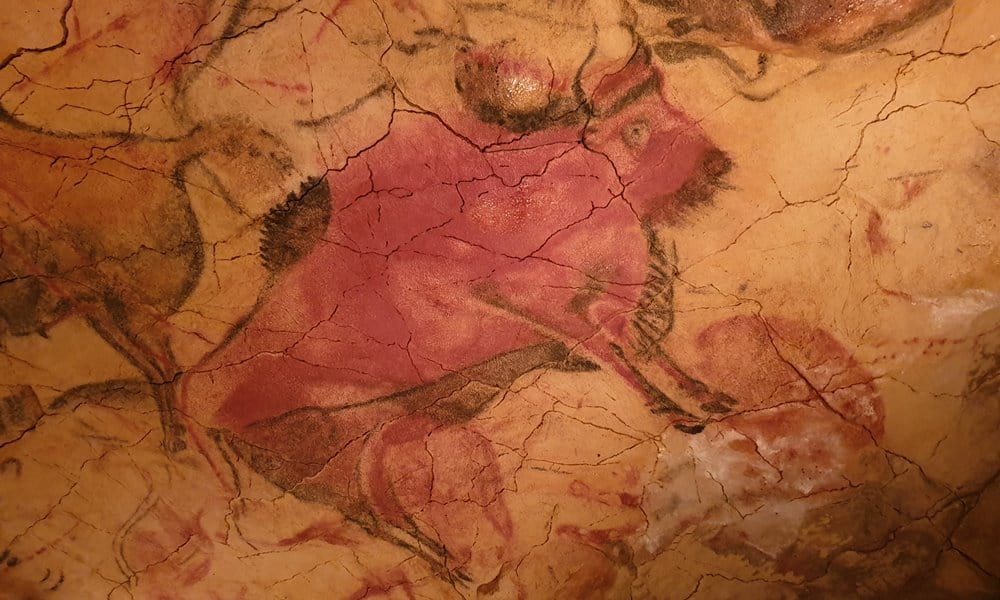 Part of the shaded polychrome frieze of bison painted on the ceiling in the cave of Altamira (reproduction) for which the cave is so well known.

Altamira is to Spain what Lascaux is to France. The art in both caves was found, accidentally by children, although those in Altamira were found 60 years earlier than those in Lascaux. The first life-size reproductions of cave paintings were of the spectacular bison in the cave of Altamira – made in 1964. A technically more sophisticated approach was developed some 20 years later to reproduce part of the cave of Lascaux, what we all know of as Lascaux 2.

As we have been provided with an essentially Franco-centric history of art, Lascaux does tend to take the limelight from Altamira. The cave art of Altamira was the first Palaeolithic cave art to be discovered in Europe in modern times. And it was this discovery that would radically change the way in which Stone Age people were perceived, albeit two decades later. The story of this discovery is at once a delight and a tragedy.

The Story of Altamira

The cave itself was discovered in 1868 by a local hunter, but it was just over ten years before the true magnificence of what was in the cave would come to light. A brief and initial sighting of the meaningless black signs was made in 1876 by Don Marcelino Sanz de Sautuola, the owner of the cave. As they did not look like much and certainly did not make any sense to him he dismissed them. In 1878 de Sautola was visiting the Universal Exhibition in Paris when he saw pieces of carved bone. Excited by the prospect of finding similar objects in his cave, de Sautuola and Juan Vilanova y Piera, an archaeologist from the University of Madrid, began excavating the deposits in 1879. While de Sautuola excavated the cave floor, his eight year old daughter Maria explored the cave. Maria’s father’s focus was on the deposits he was excavating, whereas Maria’s inquisitiveness took her gaze everywhere. Not surprisingly it was Maria who first saw the paintings of bison on the ceiling of the cave. Maria thought the depictions of he extinct bison were bulls, she cried out to get her father’s attention. Many years later Maria would tell the German prehistorian Herbert Kühn that discovering the bison was …

The greatest adventure of my life … and, also, my bitterest disappointment.

Although Maria’s father recognised the importance of her discovery, the same can not be said for Europe’s archaeological establishment such as it was back then.

The following year de Sautuola published a very modest account of his work in Altamira. In it he described in detail the artefacts recovered during his excavations. He also identified the exquisitely painted bison, and linked these to the carvings of bison he had seen in Paris a year or so earlier. He concluded that the paintings were executed by the same people who were responsible for the stone and bone artefacts being excavated from the caves. Sadly, he was ridiculed for his conclusions and was even accused of making the paintings himself. He died in 1888 a ridiculed and broken man.

Not until 1902 did prehistorians accept what Don Marcelino Sanz de Sautuola had suggested more than two decades previously, that the painted bison in Altamira were many thousands of years old.

Altamira Heralds a Change in Attitude

Almost certainly there are a number of reasons why de Sautuola’s case for a Palaeolithic age of the cave art was rejected. Not only had nothing been seen like it before, the quality of the imagery on the ceiling and walls of Altamira simply did not fit with archaeologists’s perceptions of primitive hunter-gatherer’s abilities. And, archaeologists still today do not always react well to outsider or amateur interventions. De Sautuola was an amateur, not a member of the establishment.

Elsewhere and later, caves with painted and/or engravings in them were being found. In 1895 four boys searching the cave of La Mouthe in the Dordogne found another bison. Following this discovery excavations in the cave produced a stone artefact that was interpreted as a lamp – it had an ibex carved on the underside. The publication in 1901 of copies of engravings from Les Combarelles, also argued to be Palaeolithic in age, finally broke the sceptics.

Personal status and religious attitudes finally gave way to rational thought and mounting evidence. A change too late for Don Marcelino Sanz de Sautuola, who was at best dismissed as naive or worse branded a fraud. Sadly, but perhaps quite understandably, Maria would later say her discovery was as much a disappointment as it was a great adventure.

Getting a Ticket to see the original cave

In February 2014 pilot study was carried out during which each week for a year five members of the public were chosen at random and given a very short tour of the cave. As there seemed to be no return of the bacterial growth that caused the cave to be closed to the public in 2002, the scheme was extended.

Sadly because of the global situation in 2020, Altamira – the cave, neocave and museum were all closed to the public. The replica, or ‘Neocave’, and the museum reopened early in June and public visits to the cave resumed on 15 August. But for safety reasons the lottery draw that would take place each Friday morning has been suspended. The authorities are now contacting those people who were on the waiting list when the cave was closed in 2002 and offering them places to visit the original Altamira cave. This special access visit now takes place on Saturdays.

New applications to join the waiting list are not being accepted.

The same protocols are being observed. Visitors will have to wear a bio-hazard suit and follow strict guidelines for their time in the cave.

The tour begins at the neocave, where the geology and the archaeology and history of the cave is explained. Not only is the overall time spent in the cave strictly monitored, so is the time spent at each stop in the cave. Of the 37 minutes in the cave, eight are spent beneath the polychrome ceiling – in silence. The guide then takes the lucky five to a few more stops to see engraved depictions and other paintings, but the tour stops short of the final narrow gallery (known for its depictions of masks).

This information is available, in Spanish and English on the official website. 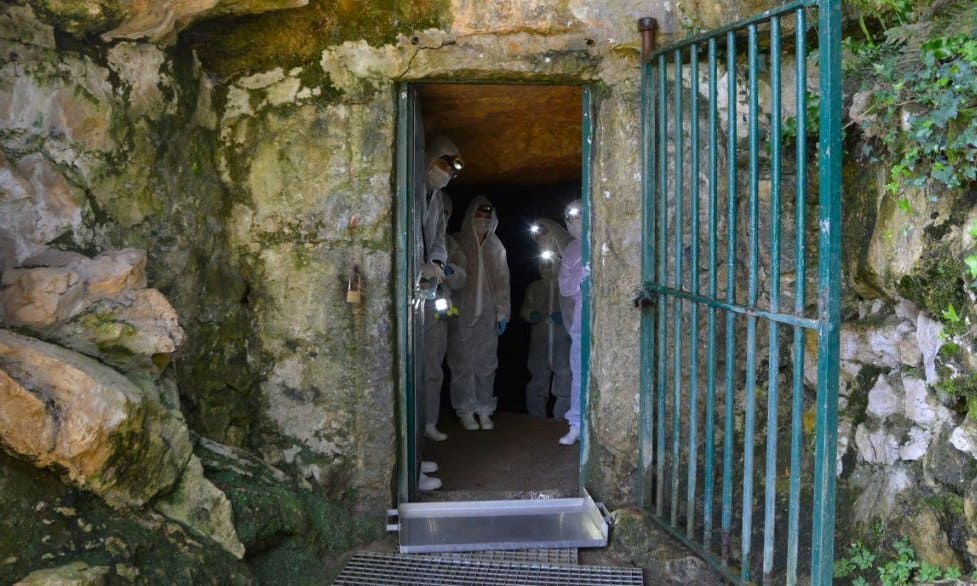 For the lucky people who get to enter the cave, their visit is carried out under strictly observed conditions including wearing a bio-hazard suit. © Museo de Altamira

Why seeing the Replica is as Good as the Original

The ceiling in certain area of the cave is very low – at places less than a metre above the floor. Towards the back of the cave, away from the entrance Palaeolithic painters and engravers would have had to crouch down. Consequently it is impossible to see the entire panel in the cave. The painted ceiling in the replica has been made much higher than it is in the cave, allowing visitors to see and appreciate the entire panel. The relationship of the original floor level is clearly marked for visitors to get a good impression of what the conditions are like in the cave.

The engraved depictions in the cave are very difficult to see. In the replica these have been slightly enhanced to make them more visible to the naked eye.

The creators of the replicated cave have tried to reproduce the cave as it was during the Palaeolithic. So, the concrete supports added in an attempt to prevent the ceiling from collapsing have not been included. More interestingly, the entrance to the cave as it was in Palaeolithic times has also been recreated in the replica. This feature allows visitors to get a feel for what the cave and the art would have looked like when the cave was naturally open to the elements. This is not an experience anyone has had since the entrance to the cave collapsed sometime at the end of the Ice Age; and an experience that is never to be had again.

Visiting the Altamira Museum and Replica

The cave of Altamira and the replica is 2 km from the town of Santillana del Mar, in the northern Spanish region of Cantabria.

Last admission is no later than 30 minutes before closing time.

Altamira in the News

Three new Palaeolithic hand prints have been found inside the Altamira cave – article in English on the Spanish EL PAÍS Website, dated 31 January 2019.

Where to Stay and Where to Eat?

The town of Santillana del Mar is not only logistically the perfect place to base yourself when visiting Altamira, it is also a wonderful little town. Clearly a town with its own character despite the many thousands of visitors the cave has brought over the decades. There are a few museums and attractions in the town, and Santillana del Mar is not far from a few of the other decorated caves that are open to the public. The town is not far from the northern coastline, and many more attractions there.

There are a number of Hotels in Santillana del Mar. Within walking distance of the museum is one I recommend, the Hotel Spa San Marcos. While staying there, walk into town for a meal at the Restaurante Gran Duque (Calle Jesús Otero, 7). My recommendation is to take a selection of starters, tapas style. Being close to the sea, the restaurant has a number of very tasty seafood dishes as well as the usual pork dishes. If you are visiting in autumn and winter, try the Cocido Montañés: a ‘mountain bean stew’ typical of the Cantabrian region with origins in the 17th century. Besides the beans and collard greens, there is bacon, pork ribs, black pudding and chorizo.

For those visitors to the region staying in the nearby city of Santander (just over half an hour away, and home to the must see Museo de Prehistoria y Arqueología de Cantabria) can take a 5 hour tour to Santillana del Mar. Here you get to explore the historic town for a couple of hours before visiting the Neocave – Altamira’s replica. More information and Book Online >>

Visiting Spain? Or do you enjoy visiting rock art sites? If you are planning a trip to Spain, check our Spain Travel Guide for History and Adventure Seekers. For rock art enthusiasts, check our World Rock Art Guide.