Celebrate Five Significant Anniversaries of England’s Past in 2015

This year sees England celebrating a number of significant historical events. From the Viking King Cnut’s invasion of England in 1015, to the signing of the Magna Carta on 15 June 800 years ago, to the 50th anniversary of the death of one of the countries towering political figures, Winston Churchil. Read on to find out where you can join in the celebrations and commemorations. 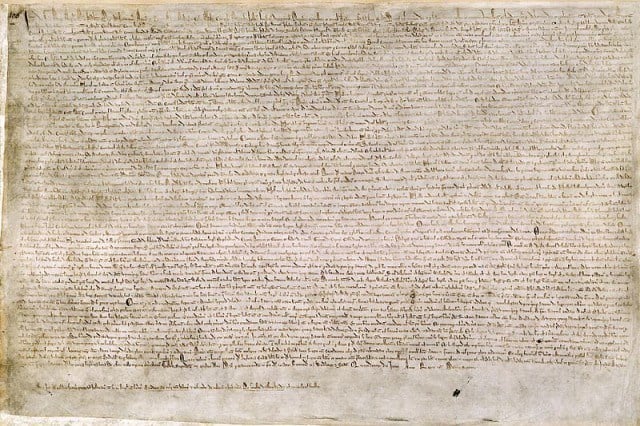 One of four original copies of the Magna Carta in the British Library, London.

Drafted by the Archbishop of Canterbury as a solution for a political issue, the Magna Carta (Great Charter) was intended to bring peace between an unpopular King and a group of rebel barons. Enshrined in the various ‘clauses’ were the protection of church rights, protection against illegal imprisonment for barons, access to justice, and limitations on feudal payments to the Crown. King John of England applied his seal to the vellum document on 15th June 12 at Runnymede, near Windsor Castle. Although the commitments were not honoured then, the Magna Carter is seen as one of the foundations of British democracy and law. 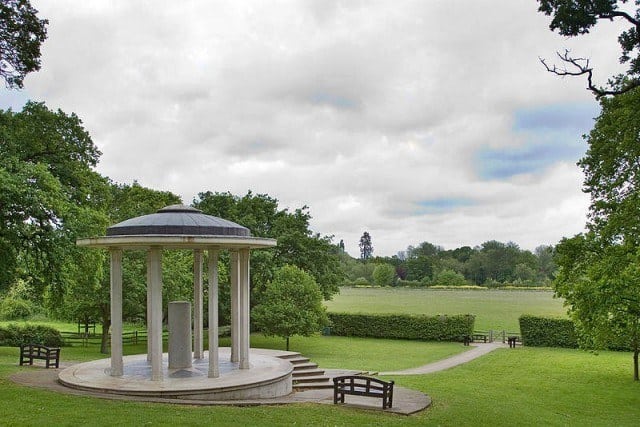 Today there are four original copies of the Magna Carta, these are held by the British Library, Salisbury Cathedral and Lincoln Cathedral. To mark the 800th anniversary of the signing of the charter, all four will be on display at the British Library from 13th March to 1st September in an exhibition titled Magna Carta: Law, Liberty, Legacy.

Pope Innocent III annulled the charter, and this led to what is known as the First Baron’s War (1215 to 1217). The impact of this conflict can be seen at castles such as Dover Castle and Berkhamsted Castle.

A conflict 50 years later, known as the Second Baron’s War (from 1264 to 1267), is widely regarded as leading to another significant democratic act to be celebrated in 2015. Seven hundred and fifty years ago, on 20th January 1265, Simon de Montford called a meeting of elected representatives from across England. Although Knights had come together before, this was the first time boroughs were represented at such a gathering – hence it is thought that this was the first meeting of a true ‘English Parliament’. Battles in the Second Baron’s War took place at Lewes (as at Blackcap) and Evesham. And the six month long siege at Kenilworth Castle in 1266 is the longest in English history.

The Cumbrian town of Carlisle is situated close to the England and Scotland border. Not surprisingly then the castle there has been at the centre of many battles and invasions in its 900 year history. One of the most dramatic of these was seven hundred years ago this year. Following Robert the Bruce’s victory at the Battle of Bannockburn in June 1314, much of northern England suffered many raids and invasions from the north. During the summer of 1315 the Scots invaded the town of Carlisle, and attempted to take the castle – unsuccessfully. 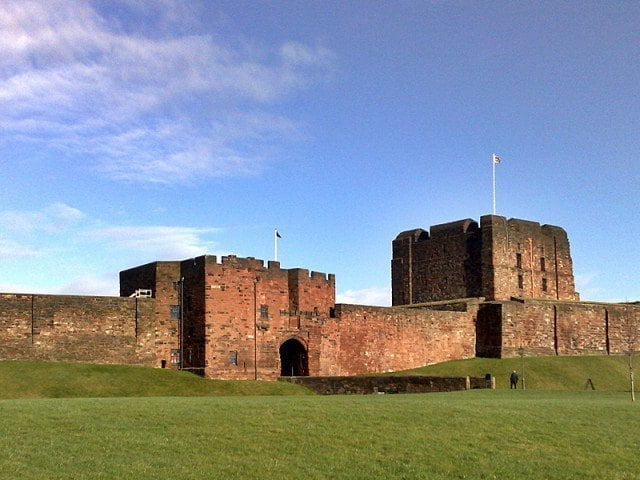 One of the most besieged castles in England. © Neil Boothman

The Battle of Agincourt was an important victory for King Henry V against the French king Charles VI during the so-called Hundred Years War, that was not in fact 100 years. Henry’s troops were outnumbered by the French, and besides hand-to-hand combat the battle is also important as it was here that the English and Welsh troops made use of the English longbow. As a consequence of Henry’s victory, he married Charles’s daughter and their son, Henry VI, became the heir to the French throne. Portchester Castle: a view over the outer bailey from the keep. © Charles Miller

The battlefield is in northern France, near the rural town of Azincourt. But it is said that the battle was sparked by a gift of tennis balls from the French to the king of England who was in residence at Kenilworth Castle. Henry V lead his troops into battle against the French having gathered at and setting sail from Portchester Castle – where activities this year will commemorate this great victory.

Waterloo is one of the most famous battles in English history – where the Duke of Wellington defeated Napoleon Bonaparte on a battlefield in Belgium. 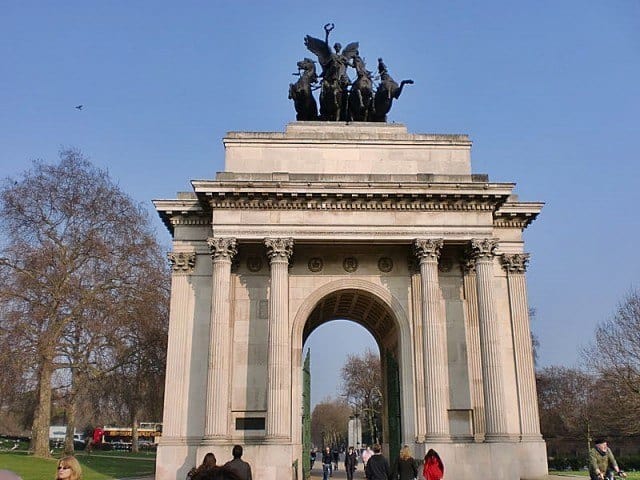 If you can not visit the Waterloo Battlefield Museum in Belgium, a number of historical sites associated with Wellington will host events and exhibitions to mark the anniversary. Wellington’s residence Apsley House, ow a museum and art gallery with its Waterloo Gallery, will commemorate the bicentenary as will Wellington Arch , with a special exhibition on the battle in the Quadriga Gallery. The Duke spent his final days in Kent at Walmer Castle, his rooms will offer a personal view of the man and his legacy. 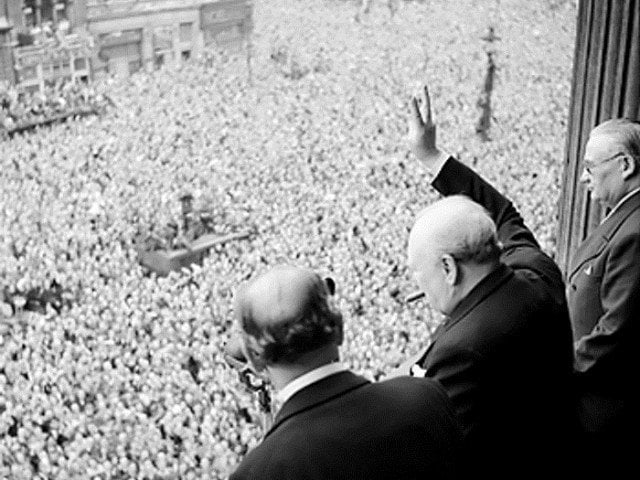 Winston Churchill waving to crowds in Whitehall – 8 May 1945.

There are numerous memorials around England that commemorate World War II, acknowledging the great sacrifice that men and women who fought and lost their lives during the six years of war against the Nazis. Two English Heritage properties, namely Dover Castle and Wrest Park will feature 1940s style re-enactments this year.

Besides the anniversary of VE Day, two other anniversaries will be marked at historical sites around England.

This year is the 75 anniversary of the Dunkirk evacuation, which took place between 27th May and 4th June in 1940. Also known as the ‘Miracle of Dunkirk, over 800 small boats sailed from England to the beaches of northern France where British, French and Belgium troops had been cut off and surrounded by German troops. This flotilla of merchant marine boats, fishing boats, pleasure bats and lifeboats rescued 338,226 soldiers, who would have otherwise been captured or killed, and prevented certain defeat. It is this action that gave rise to the idea of having a ‘Dunkirk Spirit’. Operation Dynamo, as it was codenamed, was coordinated in the tunnels of Dover Castle. These wartime tunnels are open to the public where an audio-visual presentation tells the dramatic story of the evacuations of the summer in 1940.

One of the prominent figures associated with both VE Day and the Dunkirk Evacuations is Sir Winston Churchill. Churchill’s ‘We shall fight on the beaches’ speech of 4th June 1940 referred to the rescue and spirit of the Allied forces. This year marks the fiftieth anniversary of the death of Sir Winston Churchill on 24th January in 1965. Churchill birthplace Blenheim Palace near Oxford is open to the public, as are his wartime cabinet rooms. The Churchill family home at Chartwell, where he lived from 1924 until his death has an exhibition planned, Death of a Hero. With never-before-seen-items from personal family mementos to commemorative gifts this exhibition provides a unique insight into the passing of one the most-loved statesmen in English and World history.

Many of these sites where commemorations and celebrations will take place are managed by English Heritage or the National Trust. Read my post about the benefits of joining English Heritage, membership not only allows free or greatly reduced entry fees, but also access to many of the special activities that will take place o celebrate these anniversaries. Similar benefits can be had with National Trust Membership.