Five Must See Temporary Exhibitions in 2015

Each and every year museums around the World host travelling, temporary exhibitions. These special exhibitions often provide locals with an opportunity to see artefacts and objects they would never otherwise see. This year, 2015 is no different – there are a number of international touring exhibitions that really should not be missed. Here are five exhibitions that are on the top of my list: and they range ancient Greeks in North America, to the Aztecs in Australia, and ancient Carthagians in the Netherlands; a Roman hoard in California to the remains of Medieval Battles in Germany.

The Greeks – Agamemnon to Alexander the Great

Ancient Greece was in the news a lot during 2014, most notably the excavation of the Tomb of Amphipolis. Anyone with the slightest interest in archaeology and ancient history was gripped by the possibility that this was the tomb of Alexander the Great. We await the results of the bone analysis, expected in January 2015. So it seems appropriate to have a major exhibition on the Ancient Greeks touring North America. 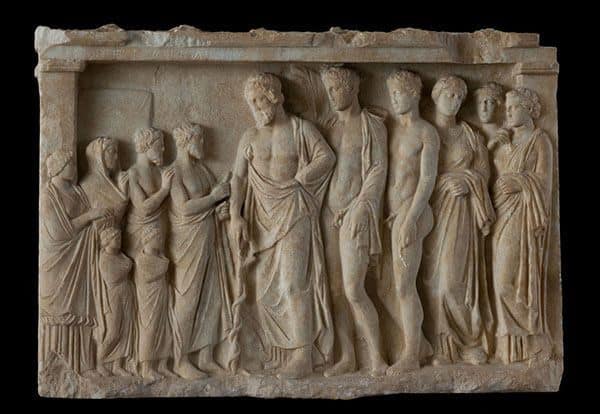 One of many artefacts from ancient Greece to tour North America in 2015.
© National Archaeological Museum, Athens

The exhibition, titled Τhe Greeks: Agamemnon to Alexander the Great, has been organized by the Hellenic Ministry of Culture and Sports, and brings together 522 objects from 21 museums around Greece. The story begins around 8,000 years ago and ends at the time of Alexander the Great (356 to 323 BC), and so visitors will appreciate seeing the iconic gold portrait of the man whose conquests created one of the largest and most intriguing empires in ancient history. The exhibition tells the stories and lives of many other prominent figures in Greek history, including Aristotle, Plato, Philip II of Macedonia and the Spartan King Leonidas, and mythology, such as the legendary King Agamemnon and other epic heroes and gods of Greek mythology from Achilles, Aphrodite, Athena, Zeus to Poseidon. Given the depth and breadth of the objects on display, this is truly a once in a lifetime opportunity for people in North America.

Founded by the Phoenicians in the 9th century BC on the coast of what is today Tunisia, Carthage is one of the most legendary cities of the ancient world. It was destroyed by the Romans in 146 BC, captured by the Vandals in 439 AD, and then destroyed again in 698 AD during the Muslim Conquest of North Africa. From in the seventh century AD onwards, the city was gradually forgotten. The ruins of Carthage were rediscovered in the early nineteenth century. 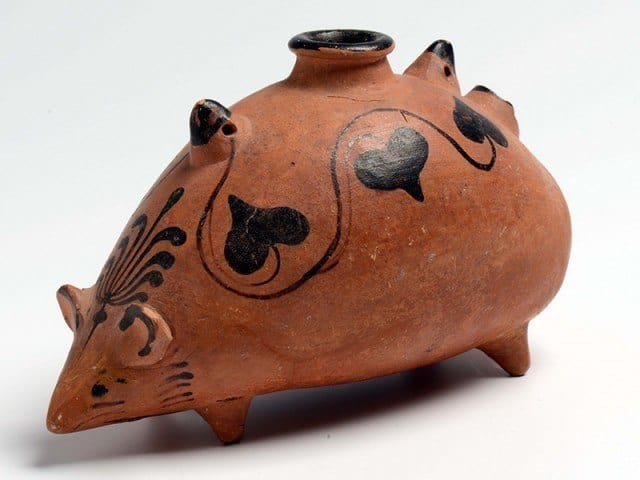 Artefacts from a few European collections join a number of objects from various museums in Tunisia – the first time many of these have been on display outside of Tunisia. In all over 300 artefacts make up the exhibition, simply titled Carthage, at the Rijksmuseum in Leiden. An impressive range of artefacts have been brought together, including the jewels and glass artefacts, marble and bronze sculptures, as well as colourful mosaics and tombs. Some of the objects were even recovered from a shipwreck.

The Carthage exhibition tells the eventful history of this fascinating ancient city, beginning with the founding of the ancient city, followed by its subsequent annihilation and reconstruction by the Romans. The lives of prominent mythical and historical figures, from Queen Dido to the Trojan hero Aeneas, Hannibal to Emperor Augustus, add a biographical aspect to the city’s history.

The Aztecs lived in what is now central Mexico from the 14th to the 16th centuries. Their vast and powerful empire, which centred on Tenochtitlan, dominated much of Mesoamerica until the arrival of the Spanish in 1519. Through a series of conflicts and smallpox epidemics, the Spanish defeated the Aztecs and established Mexico City. Today we have spectacularly stunning artefacts and ruins that tell the story of this great civilisation, some of which are currently touring the great museums around the World. 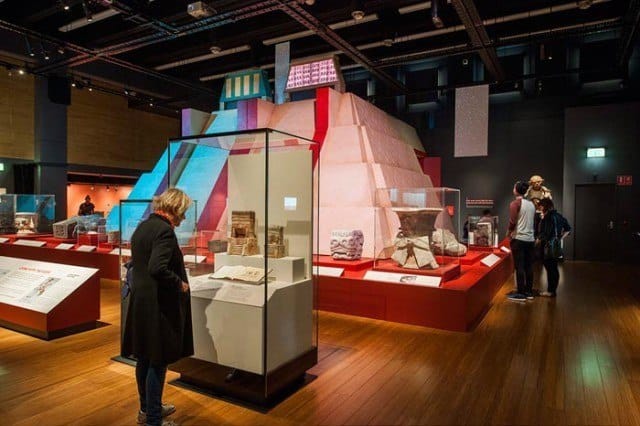 The Aztec exhibition in Sydney – until the end of January. © James King, Australian Museum

More than 200 priceless artefacts from two of Mexico’s largest museums (the National Museum of Anthropology and the Templo Mayor Museum) as well as dramatic multimedia installations tell the story of the stellar and ultimately tragic rise and fall of the Aztec empire.

The Battle of Wittstock is one of a series of battles in Europe’s Thirty Years War – one of the most destructive and longest wars in European history that raged between 1618 and 1648. It started out as a war between Protestants and Catholics but developed to a broader political conflict for dominance in Europe. Wittstock represents Sweden’s intervention into the War, and it was here that a Swedish army defeated an Imperial-Saxon army. 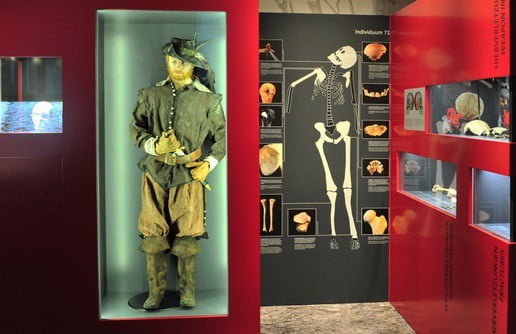 One of the displays in the ‘1636: Their Last Battle’ exhibition. © Brandenburgisches Landesamt für Denkmalpflege und Archäologisches Landesmuseum, Detlef Sommer.

Recently, a mass grave of 125 soldiers who lost their lives in the Battle of Wittstock was excavated by archaeologists. The remains have been studied by scholars and scientists with different areas of expertise. And now we know quite a bit about the lives of these soldiers. With over 2,000 artefacts (including clothes and weaponry), some that visitors can touch, multimedia installations, battlefields reproductions, this exhibition tells the story of the lives of these soldiers during the Thirty Years’ War until their tragic death in battle on 4th October 1636.

Ancient Luxury and the Roman Silver Treasure from Berthouville

The Berthouville Treasure is a rare collection of 93 Roman objects unearthed in 1830 by a farmer in Normandy, France. Most of the artefacts are decorated bowls, cups and jugs, as below, made of silver and other metals. There are also two exquisite silver statues of the god Mercury. So the very rare and precious cache most likely belonged to a sanctuary dedicated to Mercury before they were buried in the 2nd or 3rd century AD. 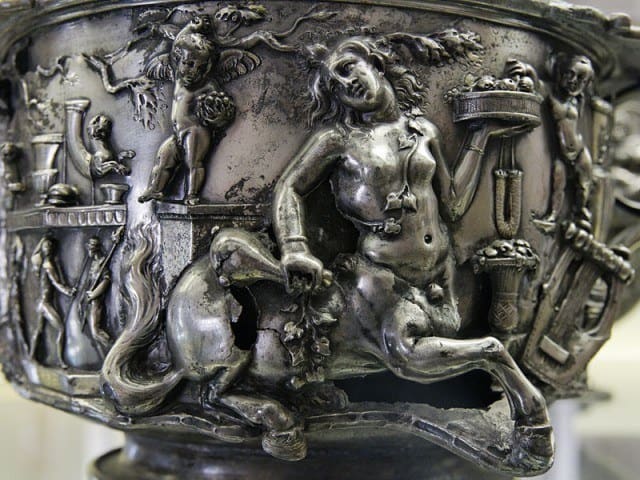 Detail of the centaurs on a silver Roman cup.

The treasure was acquired by the Bibliothèque Nationale de France (Paris) soon after it was found, for a sum of 15,000 Francs. As the objects had been buried for centuries many were heavily encrusted and the solder that held together component parts of some of the pieces had deteriorated. Since 2010 the entire collection has been in the J. Paul Getty Museum’s Antiquities Conservation Department, where it has undergone extensive conservation and research. This exhibition is the first time that the treasure has been exhibited in its entirely outside of Paris. When the exhibition is over, the Berthouville Treasure will return to France.

These are just five temporary archaeology exhibition doing the rounds in 2015, there are many, many more.

For a more complete list of temporary archaeology exhibitions in art galleries and museums around the World, Click Here.