Last week and just in time for this weekend’s Journées du Patrimoine (heritage days) the French Minister of Culture and Communication, Frédéric Mitterrand, announced a new label for historic houses in France, Maisons des Illustres – quite literally, houses of the illustrious. The houses that have been awarded this new badge of honour were not only singled for their historical value but also because of who lived in them; in fact the historical significance of these houses is defined largely in terms of their illustrious inhabitants.

This initiative is a response to growing concerns that many such houses are being visited less frequently. Out of a recent survey of over 900 houses only 111 have been given Maisons des Illustres status. The word house has been employed in its broader sense, and the list includes apartments, studios and castles. Similarly, the past inhabitants of these houses represent all aspects of French history and culture, from the Bonaparte family house on the island of Corsica where Napoléon Bonaparte was born to Villa Les Rhumbs in Normandy, the childhood home of Christian Dior. Two of Victor Hugo’s houses are included, Maison Vacquerie in Villequier, Upper Normandy, and his apartment in the l’Hôtel de Rohan-Guéménée, Paris. The list of people’s houses included really does read like a who’s who of French politics, culture and history, for example:

For those with a particular interest in archaeology, more specifically Egyptology, the Champollion family house in Figeac, Midi-Pyrénées, has been included on the list. 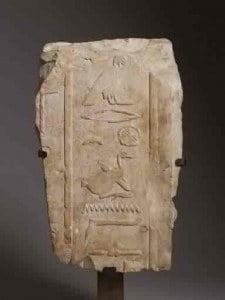 An Egyptian Stele from the 7th century BC Photo © Musée Champollion, used with permission

Jean-François Champollion (23 December 1790 – 4 March 1832) is known for having deciphered Egyptian hieroglyphics. He was also instrumental in encouraging the king of France, Charles X, to buy a collection of over 2000 Egyptian antiquities that would then form the basis of the Louvre’s Egyptian collection for which it is now world famous. Champollion was in fact the first director of this musée d’antiquités égyptiennes at the Louvre. So it is not surprising then that this man’s home should be recognised today as one of the maisons des Illustres

Less well known as an archaeologist is Jean-François Champollion’s older brother Jacques-Joseph Champollion. Along with five other siblings the brothers were born in Figeac, in a modest house on rue de la Boudousquerie, since renamed rue des Frères Champollion. This renaming of the road was part of a substantial development during 2005 and 2007 of what was once the Champollion family home and had since 1986 been a rather simple museum honouring the life and work of Jean-François Champollion, as well as a gesture to acknowledge both brother’s contribution to archaeology. With financial assistance from the EU, the French state, the Lot Department and the town of Figeac, the rather simple Musée Champollion was transformed into a modern state of the art museum. Neighbouring properties were acquired, and the front of the building was radically altered. To a very contemporary façade of stone, glass and metal, that stands out from the surrounding, traditional townhouses, the graphic artist Pierre di Sciullo added a million hieroglyphs and other letters from various alphabets around the world to create a façade that is now noted as a piece of art in its own right. La façade aux mille lettres makes clear the new focus of the museum.

Renamed the Musée Champollion – Les Écritures du Monde is now the only museum in Europe dedicated to the history of writing in Europe. Not only does the museum quite naturally tell the story of Jean-François Champollion and his work deciphering Egyptian hieroglyphics, but with many beautiful, original artefacts the museum explores the development of writing in many different cultures around the world.