Women in Archaeology and Travel

Today, 8 March, is International Women’s Day, the 100th anniversary in fact. For the last hundred years this annual event has been celebrating the economic, political and social achievements of women past, present and future; as necessary a cause today as it was in the early 1900s. A century on the various events planned around today are much more diverse and widely recognised; some countries even observe a national holiday. 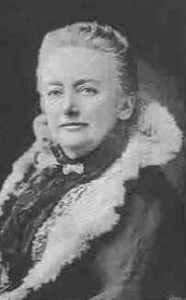 With archaeology’s increasing awareness of women’s issues it is not surprising then that some museums at least choose to observe International Women’s Day by hosting specific events that not only celebrate the lives of prehistoric women, but also women archaeologists. The image of Indiana Jones may be the order day in archaeology, but women have not only had prominent and successful careers in archaeology, a number of women have been fundamental to the development of the subject. My own training and research was greatly informed and influenced by two of South Africa’s leading archaeologists, Lyn Wadley and Janette Deacon. And perhaps the earliest and most successful archaeology travel writer was a woman.

Two British museums have planned specific events for this week, they are the Egypt Centre at Swansea University and the Petrie Museum of Egyptian Archaeology at University College London. The Swansea Egypt Centre has been at the forefront of dealing with gender issues in Egyptology, hosting groundbreaking conferences and exhibitions. This week a series of activities has been planned to enable visitors a greater engagement with objects from ancient Egypt that were closely associated with women.

The Petrie Museum has chosen today to unveil a new bust of the novelist, travel writer and Egyptologist Amelia B Edwards. The museum is named after University College London’s first professor of Egyptology, Professsor Flinders Petrie. The museum was, however, only possible thanks to the financial and material legacy that Amelia Edwards left to the University. We should be mindful that in 1892 University College was the only university to award degrees to women. 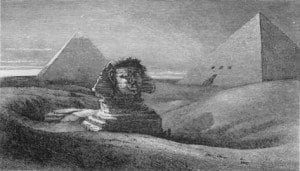 Amelia Edwards's sketch of the Sphinx and Pyramids

Edwards (7 June 1831 – 15 April 1892) started writing at a very young age; her first poem was published when she was just 7 years old. She went on to become a very respected British novelist, but it is her work as an Egyptologist and archaeology travel writer that I wish to mark today on Archaeology Travel. To get away from the dreariness of the British winter Edwards and a few friends hired a houseboat and toured the Nile from Cairo south to Abu Simbel in Nubia. Amelia Edwards and her companions visited many of the monuments and sites that are now featured on the many Nile tours on offer by various tour operators today.

So taken was she by the various temples and sites she saw and hand sketched that on her return she set to writing an illustrated account of her journey on the Nile. The book was published in 1876, and entitled “A Thousand Miles up the Nile”. Immediately this book became a bestseller, and it is still frequently reprinted today. The full text and all the illustrations of this and other books are also available online – look for the link below. 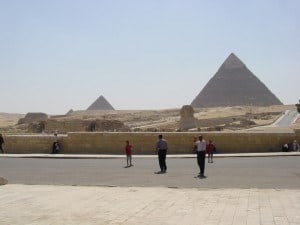 Edwards did not just have a jolly boat trip down the Nile in more agreeable weather. No, she was already aware of the threat that tourism and urban development posed to Egyptian archaeological sites. Edwards campaigned to increase public awareness and encourage further scientific research. To this end, in 1882, she co-founded the Egypt Exploration Fund (now the Egypt Exploration Society) with Reginald Stuart Poole, The British Museum’s curator of the Department of Coins and Medals. In 1890 she traveled to the US and delivered a series of lectures that were published as “Pharaohs, Fellahs and Explorers” (also now available online, see below).

Given her contribution to the academic and popular appreciation of ancient Egyptian archaeology, I think it is fitting that today of all days a bust of Amelia Edwards was unveiled at the Petrie Museum. And perhaps this is all the more poignant given the scenes we have recently witnessed on TV from Egypt, and the continued stories and rumours about the damage that may have been caused to the nation’s cultural heritage.