Discover the most important archaeological area in Syracuse on the island of Sicily in Italy. Syracuse was one of the most important Greek colonies and during this walking tour you will visit the remains of the ancient town and learn more about its history. Take your time with our archaeology qualified guides and explore the site, enjoy the park of the stone quarries and admire the view from the terrace of the ancient theatre. 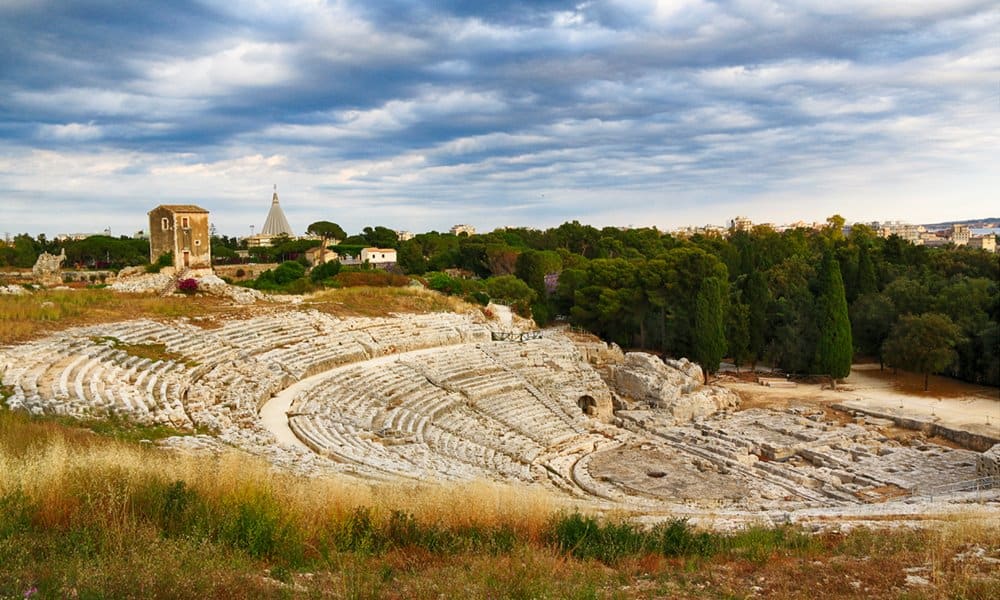 The ancient Greek theatre in Syracuse, said to be one of the finest there is.

Syracuse was the hometown of Archimedes and in the past many well known and famous people such as Plato, Pindar and Aeschylus came for a visit to see what the Roman lawyer and speaker Cicero called the largest and loveliest of Greek cities in the west.

Nowadays the monuments of Syracuse are an UNESCO World Heritage site and the remains of the ancient settlement are visible in various parts of the town. The Neapolis Archaeological Park is the most important archaeological area in Syracuse. Being a stone quarry in the beginning, later it became the area where the population celebrated religious feasts and attended theatre performances. 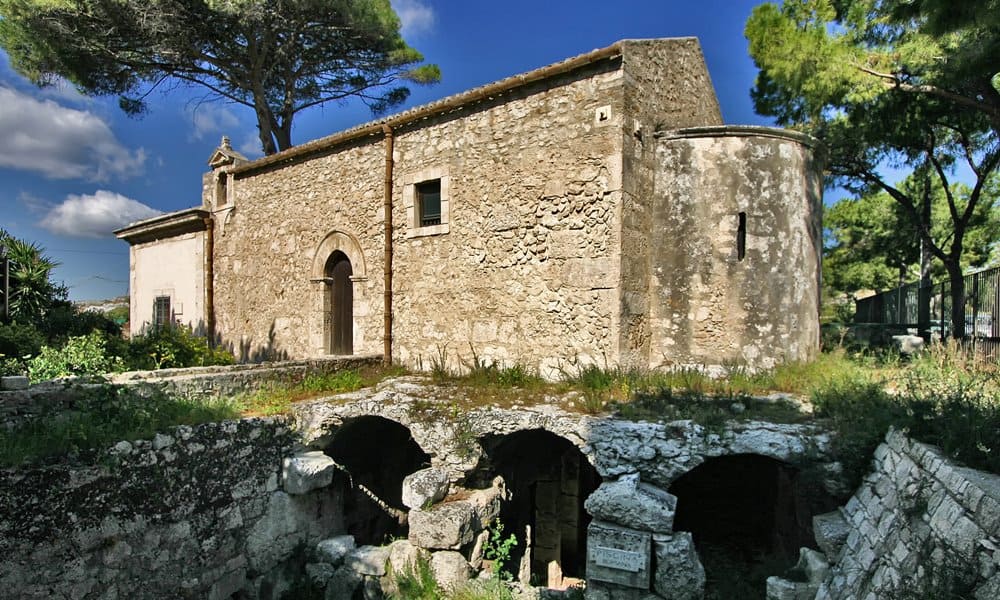 The Church of San Nicolò ai Cordari, the starting point of the walking tour of the Neaopolis Archaeological Park.

Our walking tour of the Neapolis parks starts at the medieval Chiesa dei Cordari, the church of the rope-makers. This is located near the entrance gate of the archaeological area and also the meeting point with your guide. On the map at the entrance you can compare the topography of the modern town to what it was like in Greek times, its size, layout and the position of the five ancient districts. The town was founded on the island of Ortygia but the expansion was quick and soon new districts were built on the mainland. One of these called Neapolis, new town, and this is also the origin of the name of the Neapolis park.

Syracuse has a very ancient history, dating back more than 2,700 years. A group of men lead by Archias arrived in the harbour from the Greek town of Corinth. After the glorious period of the Greek domination it was conquered by the Romans, then the Byzantines, Arabs, Normans and also the Spanish. This complex history is immediately obvious at the entrance, where you can admire the small Norman church of St. Nicholas but also see an underlying roman cistern.

The first part of the walking tour will take you to the ‘latomie’, the ancient stone quarries. Here the guide will show you signs of the hard work of the many imprisoned slaves. You will also enjoy the beautiful park which nowadays fills the stone quarry with lemon and orange trees, oleander, palms and laurel. Hence its name ‘Latomia del Paradiso’. Inside the quarry you will discover the ‘grotta dei cordari’, the cave of the rope-makers. You will learn how craftsmen in past times made ropes for ships.

You will then move to one of Syracuse’s most famous landmarks, the Ear of Dionysius. This artificial cavern is reminiscent of the shape of a human ear. Your guide will tell you the reason why the famous Italian painter Caravaggio named it ear of Dionysios, with reference to the mighty tyrant Dionysius, who governed Syracuse 400 years BC Of course you will enter inside the impressive cavern to admire the curious shape and to hear for yourself the fabulous acoustic properties of the cave by singing a song.

Next on the itinerary is the most important monument of ancient Greek Syracuse, the theatre. It was cut in the rocks of the Temenites hill and it’s the largest Greek theatre in Italy. We know that Aeschylus presented his dramas here in Syracuse as early as the 5th century BC. What you can admire today are the alterations made in the 3rd century BC under the rule of Hieron II. Proof of which lies in the inscriptions still partially legible on the wall of the diazoma, the ambulatory halfway up the cavea (auditorium). The cavea was originally made up of 64 tiers of seats. Unfortunately today only those in the lower part are preserved. Many blocks from the upper part were reused by the Spaniards in the 16th century for building the town walls around Ortygia.

Your guide is on hand to explain the importance of theatrical performance in Greek culture, and to tell you about ancient tragedies and comedies. If you want to immerse yourself more fully into the atmosphere of ancient times you must come in the springtime, between May and June. This is when Greek dramas are performed in the theatre, just as they were more than 2000 years ago.

The auditorium has nine sections and between them stairways that lead to the terrace above. This is where the spectators would find shelter under a portico in case of sudden heavy rain. The portico is not preserved anymore, but don’t miss the chance to go to the terrace. From here you can admire the Nympheum, an artificial fountain built for decoration but also to provide drinking water. The view from the terrace is enchanting. You will also see the Porto Grande, the big harbour bay. It was here in 413 BC that the Athenian fleet was enclosed and destroyed during the Peloponnese war, so well described in all its detail by Tucidides. According to legend, it is also here that Archimedes tried to set on fire the Roman ships with his mirrors some 200 years later. Your guide will show you the ancient Greek aqueduct, and the evidence for the funerary uses of this area, discovering the ‘pinakes’ cut in the rock walls and the later Christian tombs.

Your tour of the Neapolis Archaeological Park continues to the altar of Hieron. This huge platform was the largest altar built in the Greek world. It was dedicated to Zeus and a religious feast, the eleutherya, took place here each year. According to the description by Diodorus Siculus, an impressive number of bulls were sacrificed as thanks-giving to the god during these celebrations.

The final part of your visit will focused on another age of ancient Syracuse, the Roman town.

For many centuries Syracuse continued to be the largest and most important town of Sicily. The governor of the Roman province lived here and an amphitheatre was built to stage gladiatorial combats. Where the amphitheatre was built into living rock, that section still survives today. Where stone was used to build up the amphitheatre, that section is now missing as the stone was taken and used in later building projects. The arena is typically elliptical and is only slightly smaller than that in Verona. Your guide will point out the many features that have survived, such as the names above certain seats, the vaulted aisles that open onto the arena, as well as the the spectacles that were performed here. Finally you will discover the secret of the rectangular ditch in the middle of the arena. 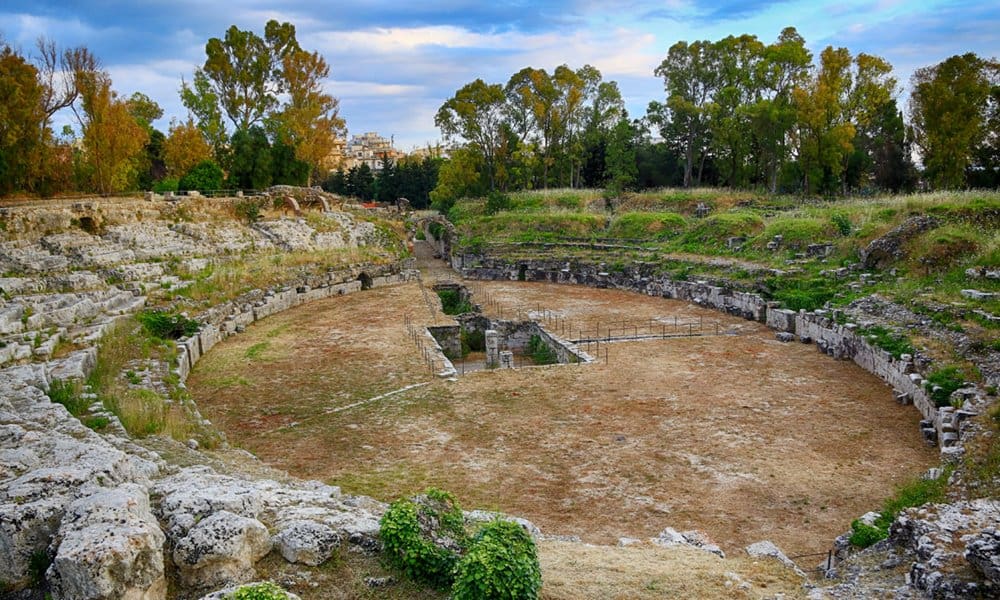 Looking into the arena of the early Imperial Roman amphitheatre.

Details at a Glance

The private walking tour of the Neapolis Archaeological Park is available throughout the year, including the Christmas period. As the tour is private (for solo travellers, families, small parties or large groups), it is possible for you to tailor the tour to your needs. You can choose the starting time, and what other sites and monuments in Syracuse you would like to visit.

Price: private tours start at €80 (for individuals or up to 4 people). Maximum rate for large groups is €120. Shared group tours are available during the summer months and Christmas period, at €15 per person.

Payment: payment in full is required to secure your reservation.

Dates: bookable on demand, you choose your preferred day and starting time, subject to availability.

Safety precautions: wearing a mask inside the archaeological area is mandatory. There are temperature checks at the entrance, and visitors are only able to follow a one-way route through the park. Shared group tours take place with max 12 participants and guaranteed social distancing (min. 1 metre). 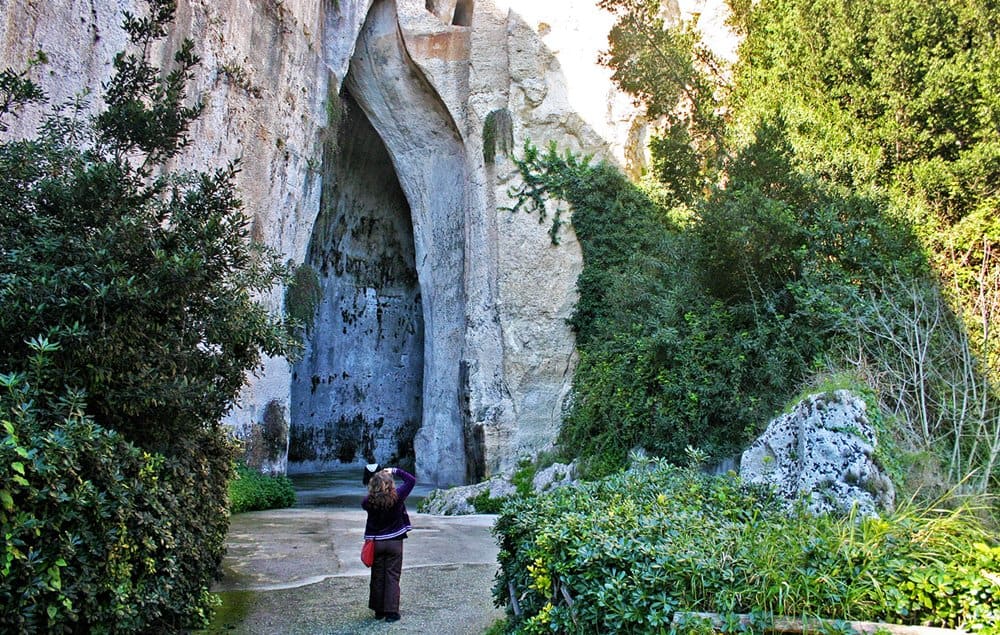 Hermes Sicily Tours is a small, locally owned company of tour guides and hiking guides. We have been active in eastern Sicily since 2005. We offer various types of tours, with many itineraries having an archaeological focus. For this reason, all our guides are licensed and have a degree in archaeology or arts.

The following are comments from just a few of the people who took the Hermes Walking Tour of the Neapolis Archaeological Park:

Our guide was very thorough in her knowledge and provided us a wealth of information. There are many hidden treasures that we wouldn’t have found without her guidance.
Jin, January 2020

A guided tour of the Neapolis Archaeological Park is the only way to truly appreciate the site. Thanks to Claudio, our guide, who accompanied us through a journey through time, made up of curious anecdotes and historical events.
Silvia, August 2020

Beautiful guided tour of the Neapolis Archaeological Park in Syracuse with Eva. Recommended for those who want to deepen the history and culture of the wonderful Syracuse.
Andrea, August 2020

Reserve a private tour of the Neapolis Archaeological Park and discover the ancient city of Syracuse.

► You set the time, itinerary and pace for your own private tour.

► Have important features pointed out by your experienced, licensed guide.

► Get insider tips on what else to see from a local who understands your interests.

► You set the time, itinerary and pace for your own private tour.

► Have important features pointed out by your experienced, licensed guide.

► Get insider tips on what else to see from a local who understands your interests.