This new and original holiday experience over 7 days will cruise electric and in comfort over 108km of rural waterways linking the great rivers Oise, Aisne and Marne, with guided visits to the wonderful cathedrals of Amiens, Noyon, Laon, and Reims, and the equally impressive Basilica of St-Quentin. The programme also includes a visit to the medieval hilltop fortress at Coucy-le-Château, and the museum of the Caverne du Dragon on the Chemin des Dames sector of the Western Front. 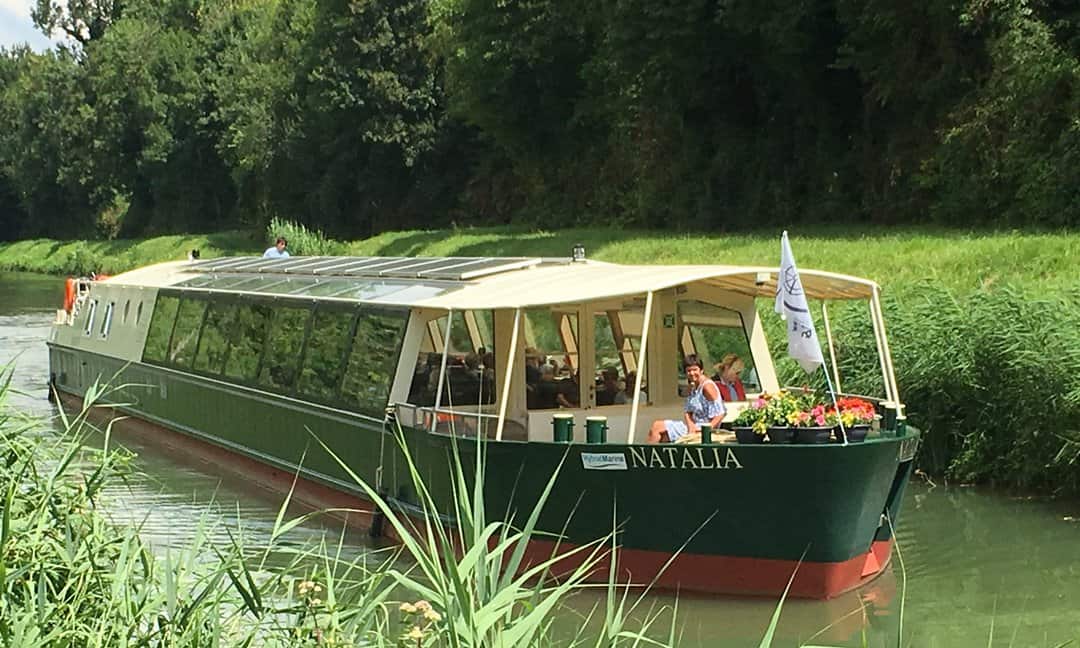 Backwaters cruises the lesser navigations in northern France where the limited scale of lock dimensions and bridge clearances denies access to larger hotel boats. Instead, we use available space to create an observation lounge cruise experience, where guests stay overnight in a nearby hotel. Such are the waterway meanders and gentle pace of travel, guests don’t have to keep changing hotel – for this itinerary we stay at the 3* Ibis in Laon where even at either end of the cruise range we are well under an hour in the coach between boat and hotel.

Cruising electric isn’t just eco-responsible, it’s very different. Visitors often remark at the quiet, with little to be heard but the rippling of the water and birdsong. And the scenery is always close-to, with herons, jays and kingfishers leading the wildlife parade.

Our daily transfers between hotel and cruiser are a delight in themselves as we pass through lovely countryside and pretty villages, with our programme of cathedral tours interwoven so that we are never on the road for long. And as we cruise we are not so much witness to the scenery, we become part of it! 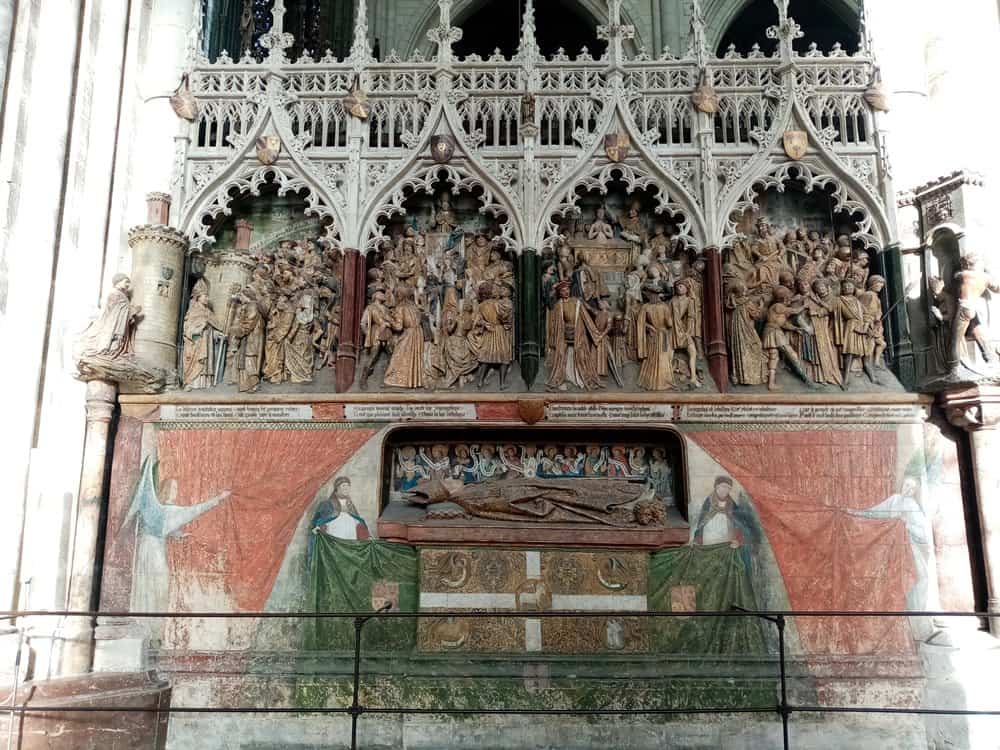 Renaissance polychrome painting on the choir screen in Amiens Cathedral.

Our week begins with a mid-morning Eurotunnel crossing to Calais and an easy onwards journey through the Opal Coast Regional Park to Amiens, where we are met by our Cathedrals Guide Julia Maassen. Julia introduces us to the magnificent UNESCO-listed Cathedral of Notre-Dame, which marked its 800th year in 2020. Amiens is the tallest of all the Gothic cathedrals to have been completed (Beauvais is taller, but incomplete).

Over the next five days we cruise in stages between Noyon and Reims (or vice-versa), following the lateral canals of the great Rivers Oise and Aisne, the summit canal which links these two rivers, and finally on to another summit canal which connects the Aisne and the Marne. Guests will enjoy lunch on board the boat, and a complimentary bar throughout cruising. There will also be opportunity for a towpath stroll along some of the canal sections where locks are closely spaced. There are even two tunnels to encounter including the 2.3km Souterrain de Braye-en-Laonnais, which passes under the French sector of the Western Front known as the Chemin des Dames.

Aside from the intimacy of the cruise experience and the flora and fauna to be witnessed, the waterways themselves are fascinating for their history and have many a story to tell of industrial heritage and wartime conflict. Guests will notice the very rural character of some of these waterways – so remote is the corridor followed by the summit canal linking the Oise and the Aisne that we call this our ‘wilderness cruise’! These days these lesser canals carry little traffic and we bring new life to them, but it is always interesting to see the occasional ‘Freycinet’ barge with its typical cargo of grain or aggregate.

Our cathedrals programme includes Noyon, probably the most important cathedral after Reims to have been severely damaged during the Great War. It was built between 1150 and 1200, though the cathedral was substantially restored after a major fire in 1293 – the rebuilding accounts for the asymmetry of its towers. The building’s stonework still bears the scars of the fighting in 1917-18 which almost obliterated the town. Then we visit Laon Cathedral, regarded as the ‘big brother’ of the Cathedral in Noyon. This wonderful Gothic structure, built in the 12th and 13th centuries, has five great towers and dominates the skyline from far afield. There are outstanding views from the ramparts of the upper town. Then our final Cathedral is arguably the greatest of all as we are introduced to the magnificent UNESCO-listed Notre-Dame de Reims, historical location of coronation of the Kings of France and widely held to be the defining model of Gothic church architecture.

This may complete our programme of cathedral visits, but there is still more historic architecture to be witnessed as we visit the Basilica of St-Quentin on travel-home day. There have been religious buildings on the site since the 4th century AD, repeatedly destroyed and rebuilt during the early middle ages. The present Basilica was constructed in stages between the 12th and 15th centuries. It was severely damaged in the Great War, and was only reopened in 1956 after extensive reconstruction.

As we follow our waterways corridor, other highlights include our visit to the medieval hilltop fortress of Coucy-le-Château where again there are splendid views of the valleys of the Oise and Ailette from the ramparts. We visit the Museum of the Chemin des Dames battlefield at Oulches-le-Vallée-Foulon; and we pause on the outskirts of Reims to visit a memorial to Pilot Officer Ian Mackenzie RAAF, killed steering his crippled Halifax bomber clear of housing in Reims in 1943. We also include a lakeside lunch at the Golf Hotel alongside the Lac de L’Ailette, not far from Laon.

Capacity on these tours is 40, so guests can look forward to the convivial company of a small group in an informal and relaxed setting, with no flying or long transfers and a big environmental plus. Because of uncertainty stemming from current travel restrictions Backwaters is accepting provisional bookings without deposit, and guests will not be asked to pay anything until the departure is confirmed three months prior to due date.

A spacious and comfortable interior within which to enjoy cruising the canals of northern France.

Cruise Details at a Glance

Payment: a 30% deposit is required to confirm a reservation three months before the departure

Cancellation and refund policy: Guests can cancel their reservation at any point up to when the deposit is payable. They can then cancel their booking at any point up to payment of balance, in which case deposit is refunded in full. After payment balances have been made, no refunds can be given. Backwaters becomes liable at that point for the full expenses of the tour including hotels and meals. Guests are therefore strongly advised to have travel insurance in place once they have paid their tour balance.

Safety precautions: As a small-group observation-lounge cruise experience which does not involve airport connections, this cruise will appeal to those who enjoy their cruising but prefer not to venture afar or stay in on-board cabins. Guests are assured that both our cruise boat and the hotels and restaurants we use will be compliant with all safety measures in force when these cruises take place. We maintain stringent standards of on-board hygiene and safety with little of the enforced social mixing that is inevitable aboard big vessels. 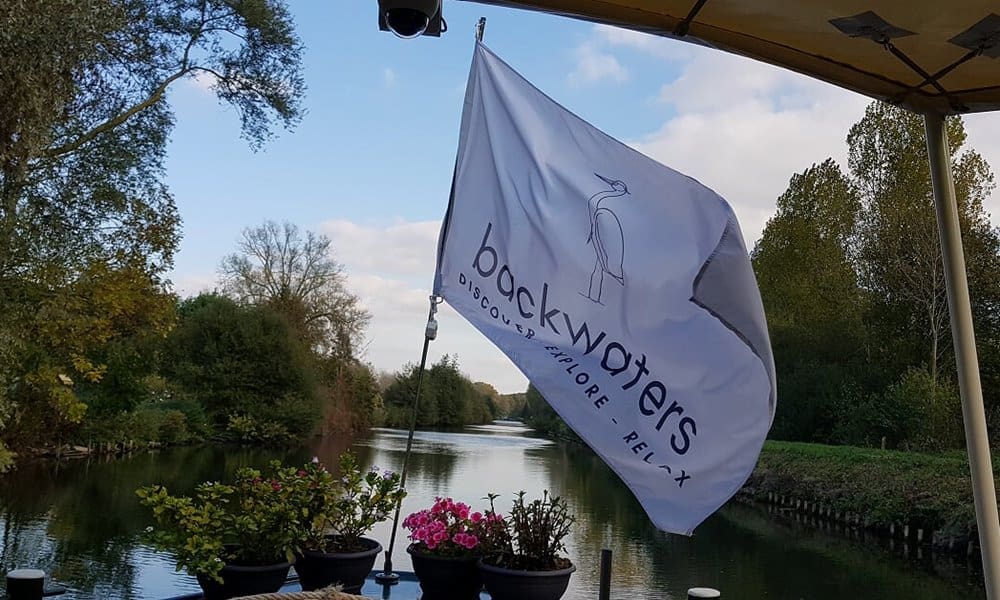 This cruise is run by Backwaters, the brainchild of former RAF Sqn Ldr Lynn Woods. Over the last 20 years Lynn has cruised most of the northern French inland waterways network in his own boat and sees great potential in opening up these thousands of miles of unexplored waterway to environmentally-sensitive small group tourism. Historical architecture is one of many cruise themes being explored by the business with its proof-of-concept vessel, others include antiques, military history, bird-life, wines and classical music.

Our professional Cathedrals Guide is Amiens Resident Julia Maassen. Julia studied Medieval and Contemporary History in Bonn, Germany, and worked in several history museums before relocating to France. In 2012 she became a qualified French regional guide, specialising in cultural aspects of World War One and the regional history of Northern France with an emphasis on the great gothic cathedrals. In addition to guiding us when we visit the Cathedrals (and the Basilica in St-Quentin) we expect to have Julia on board with us for some of our cruising.

In 2018 Backwaters was recognised by the British Guild of Travel Writers with a tourism award for championing responsible travel.