Discover the legacy of the Golden Age of Reus on Spain’s Costa Daurada during a 3-hour guided walking tour. This was a time when Reus was the second most important town in Catalonia. Along this pleasant walk you will see beautiful modernist façades, a testament to the wealth of the city’s bourgeoisie in the early 19th century. The elegance of that time can be seen at the many historic shops that have survived to this day. As a tour guide specialising in the history of the old town’s shops I will introduce you to the stories hidden inside these remarkable buildings. During the tour you will also get to taste the typical beverage that originated at this time in Reus, vermouth – in an exceptional venue few visitors get to experience. 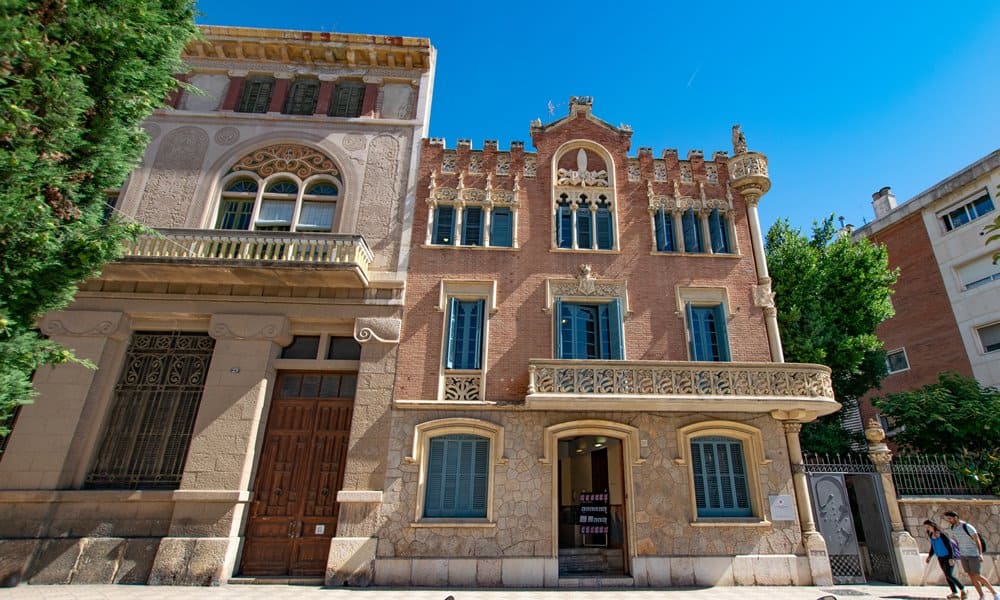 This tour introduces you to the essence of what Reus was during the modernist period and the legacy of this golden age. Reus boasts a first-class modernist heritage. Numerous architects left their mark here, which can be seen on over 30 buildings still standing today.

Reus is also well known for being Gaudí’s homeland, about whom you will learn a lot. He was born and spent his childhood here, having been baptised in the church of Sant Pere Apòstol.

Nowadays Reus has about 100,000 inhabitants. The city is still the regional centre for shopping which attracts people from all over the province. Locals and visitors alike come to experience that perfect combination of culture, gastronomy and leisure. 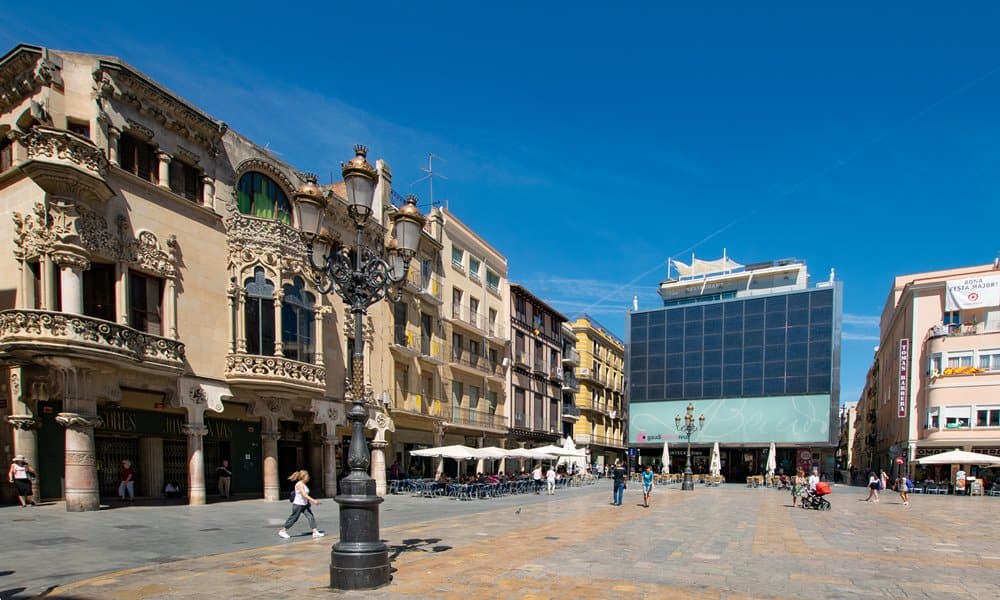 Casa Navàs (on the left) and the new Gaudí Centre on the medieval Mercadal Square in the heart of Reus.

We begin the walking tour in front of the Tourist Office in Carrer Sant Joan where we can see two exceptional modernist houses: Casa Gasull and Casa Rull, both built by Domenech I Montaner. Their façades have features of numerous artistic techniques applied to modernist buildings, such as exposed brick work, mosaics, sculptural details, and symbols that stand for the respective owners’ jobs. From there we move on along Sant Joan street passing other modernist houses as we go.

At the end of this street is Prim Square, named after Reus-born Joan Prim. Not only was Prim one of the most remarkable men in Spain’s military history, he became president of the Spanish Government in 1869. The square is well known for the Teatre Fortuny, popular with the 19th century bourgeoisie. The theatre became a symbol of both the wealth and culture of Reus, something that is still true today.

Not only am I going to tell you what we can see in the square, I am also going to build a picture of what is no longer here from the modernist years. The luxurious hotels and cafés that imported British products and French cuisine to our town. The Gran Hotel de Londres and Hotel de París. Did you know that it was Paris, London and Reus that set the price of moonshine in the 18th century?

From here we take Monterols street, the best street for shopping. We pass by an old tailor’s shop, said to be haunted by the Catalan artist Joan Miró. At the end of the street we find the beautiful Mercadal Square, the medieval marketplace. Here we find a number of interesting buildings. Most prominent is the Gaudí Centre, a visitor centre on dedicated to the famous architect that includes interactive scale models, projections and scenographies. We visit it so that I explain some of the secrets of Gaudí’s architecture.

Did you know that Gaudí was offered a project to build a stunning and a futurist hotel for New York City? At the end of the visit we watch a state-of-the-art projection which presents the origin of the Catalan Modernism and its development in Reus.

After Gaudí we continue with the walking tour to Casa Navàs, one of the most remarkable modernist houses in Reus. It was built by Lluís Domènech i Montaner and the entire original interior is preserved today. The furniture, the extraordinary stained-glass windows, exquisite mosaics and so on. The luxury of the bourgeois life in Reus is expressed in every inch of the house.

We can either marvel at the elaborate exterior, or we can enter as an optional extra. Guided visits are offered exclusively by the monument’s guides, and tickets really should be booked in advance. I am more than happy to do that for you.

We head to the amazing cloth shop El Barat, founded in 1881. Narrow aisles take us in to the heart of this traditional shop, which has been run by the same family for up to 6 generations. Stay with me and I will ensure you do not get lost in labyrinthine aisles lined with rolls of fabric rolls of all colours and textures.

Next on our tour is the Gothic Church of Saint Peter’s Church, where Gaudí was baptised. The church keeps a significant element of the town’s most popular legend: a candle which was lit by order of Misericordia, the Patron Saint Virgin who ended an epidemic in the 16th century. According to the Virgin’s demand, the candle must be lit day and night, a tradition that is still respected to this day.

The church also stores a local painter’s heart. Marià Fortuny was a 19th century painter who achieved great international recognition. His realistic and orientalist works are exhibited in Reus, Barcelona and in other major museums in Spain and the United States. Can you guess why was his heart was kept in this church, while his body was buried in Rome? I am going to tell you.

After the church, we go on with our walk around the old town where we find charming little squares full of cafes and bars. Among these I point out another historical shop, a candle-maker’s that dates back to 1835. The shop still has its original furniture and cash register, a beautiful 19th century model from the well known US brand National Cash Register. We can still see the dining room of the shopkeeper’s family home, typically located above the shop, but now used as a storage room.

If you are hungry, that is no problem because our next stop is another old shop, a cake shop. Despite having been renovated, there are 200 years of history in these walls. As members of my exclusive walking tour, you are invited to sample menjablanc, a local dessert made of almond milk. Sweet but light, menjablanc has been a delight for the inhabitants of Reus since the 14th century.

To finish our tour we visit the Museu del Vermut. Vermouth is a sign of identity for Reus. Since the beginning of its production in late 19th century, vermouth has become an important part of our gastronomy. Bars and restaurants offer the local brand ‘Vermut de Reus’ that you can enjoy while sitting on their terraces. Here you will learn more about this drink, how it is made and how it made Reus. This is no simple bar nor museum. But it does have a collection of over 5,000 items related to this beverage. From posters and historical documents to many bottles and a variety of branded artefacts, from, it is said, 57 different countries.

The collection belongs to the bar’s owner Joan Tàpies, an expert on the subject who started up his collection when he was young. The building that houses Museu del Vermut is also of historical interest. It was hat factory from the modernist era that was renovated by Pere Caselles in the early 20th century. In 2014 the building was once again heavily restored and sensitively adapted to its new function as a bar and restaurant. And has since become the place to visit to learn about vermouth and its history.

At the end of the tour, there are only three things left to do: sit down, relax and enjoy a glass of ‘Vermut de Reus’. 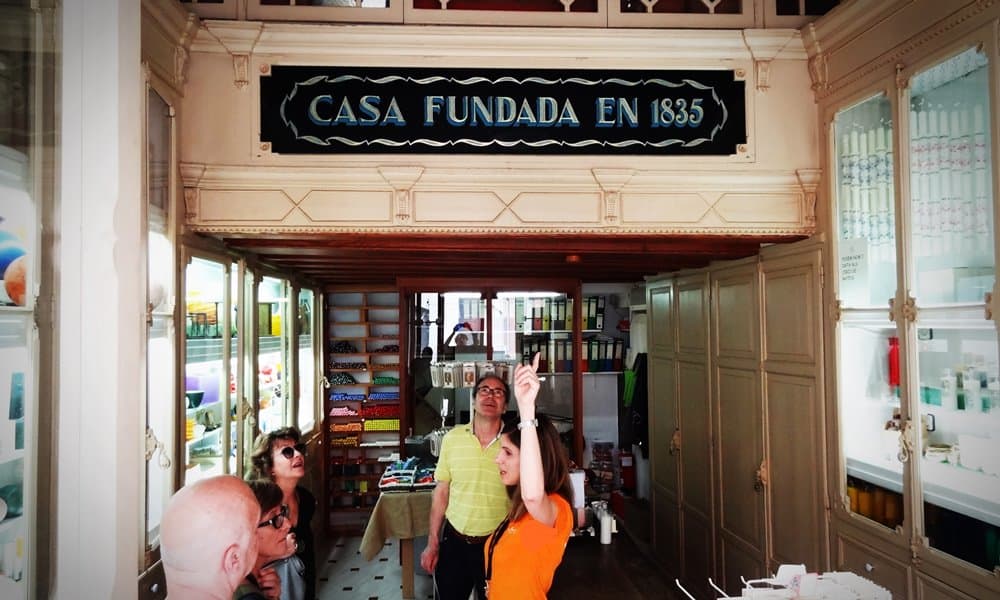 Details at a Glance

Price: 35€ per person up to 2 people. Then 15€ per person for each additional participant to a maximum of 9 people. Free for under 8 year olds. A minimum of two people is required to make a reservation, or a charge of €65 for one person.

Payment: a 50% deposit is required to secure your booking, the balance is payable in cash only at the start of the guided tour.

Cancellation and refund policy: Guests can cancel their booking up to 24 hours before the walking tour is due to start, in which case deposit will be refunded in full. Refunds can not be given for cancellations made within 24 hours of the start of the tour. In some cases, the date and time of the tour can be changed.

Dates: Any day of the week, mornings or afternoons (except Sunday afternoon), subject to availability.

Duration: 3 hours, 4 if the Casa Navàs is included.

Safety precautions: In Reus, it is a requirement that a distance of 2 metres is maintained between the guide and the clients, and that face masks be worn throughout the whole tour. Capacity-constrained areas will be avoided. Capacity control is maintained inside the venues that are included on the walking tour. We must follow the prevention measures stipulated by each venue we visit (hand cleaning, distance, mask). 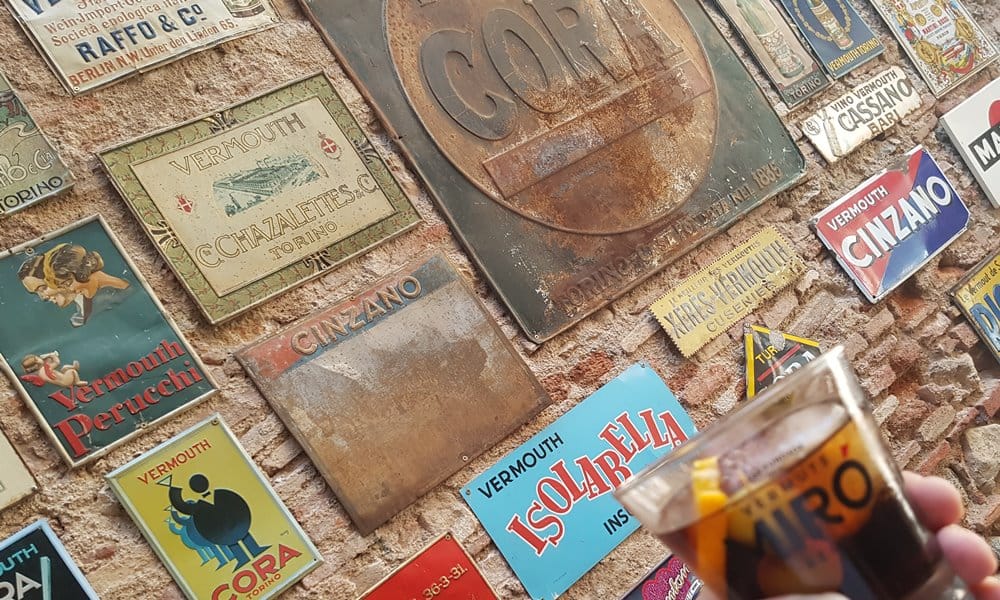 A collection of metal signs advertising various brands of vermouth in the Museu del Vermut.

My name is Carmen Granados, and I am an Official Tour Guide of Catalonia. I was born in 1984 in Reus where I grew up and where I still live. I have been working as a tour guide for over 10 years. I studied the History of Art in Tarragona, and after my Bachelors degree I studied for a Master’s degree in Museology and Cultural Heritage Management at Universitat de Barcelona.

With my interest in heritage and education I started my career working as a museum educator. An opportunity came up which enabled me to combine my expertise in cultural heritage and my knowledge of my home town and share this with visitors to Reus. Guided tours had me hooked instantly, the contact with people, the exchange of experiences. I think this is one of the most rewarding jobs out there. I mainly work in my home town, but I do offer guided tours to Barcelona and Tarragona, and the broader region of Tarragona. My tours are particularly suited to small groups of friends and families. And I especially welcome kids!

The following are comments from just a few of the people who took Carmen’s walking tours in 2020 (translated from Spanish):

A fantastic and different route, which runs through emblematic and historic shops of Reus. A different way of visiting the city, led by Carmen, an attentive, expert, pleasant guide with a narrative gift. I highly recommend it! Pati Sotomayor Serrano

A very beautiful experience, with an exceptional guide who knows how to fill the explanations with content and transmits wisdom and interest. Even if you are from Reus. Jordi Roig Nieto

It is a very interesting visit where you discover surprising places, that if you go alone you don’t know they exist! Very good! Esther Brugman

Reserve your place on this walking tour of Reus and
experience more of this historical city.

► See more in less time in Reus with a knowledgeable and local guide.

► Enter the premises of historical shops that most tourists don’t get to see.

► Taste and learn about vermouth at one of the most interesting venues in Reus.

► See more in less time in Reus with a knowledgeable and local guide.

► Enter the premises of historical shops that most tourists don’t get to see.

► Taste and learn about vermouth at one of the most interesting venues in Reus.