In Search of the Aphrodite of Milos

Having finally seen the Venus de Milo in the Louvre earlier this year, I was greatly looking forward to visiting the Greek island of Milos. For it was on Milos in 1820 that this beautiful statue, arguably the most famous of all Classical statues, was found. To the Greeks, the inhabitants of Milos in particular, she is known as the Aphrodite of Milos. Aphrodite being the ancient Greek goddess of love and beauty, while Venus was her ancient Roman equivalent. Not surprisingly perhaps, a replica of the well-known statue is prominently displayed in the entrance foyer of the Archaeological Museum of Milos. After passing the various sculptural fragments on the veranda, the Aphrodite of Milos is the first object you see as you enter the museum. The museum is in a somewhat inconspicuous location in the hilltop town of Plaka. So, before anyone gets to the museum they will almost certainly have already encountered at least one reproduction of the sculpture. 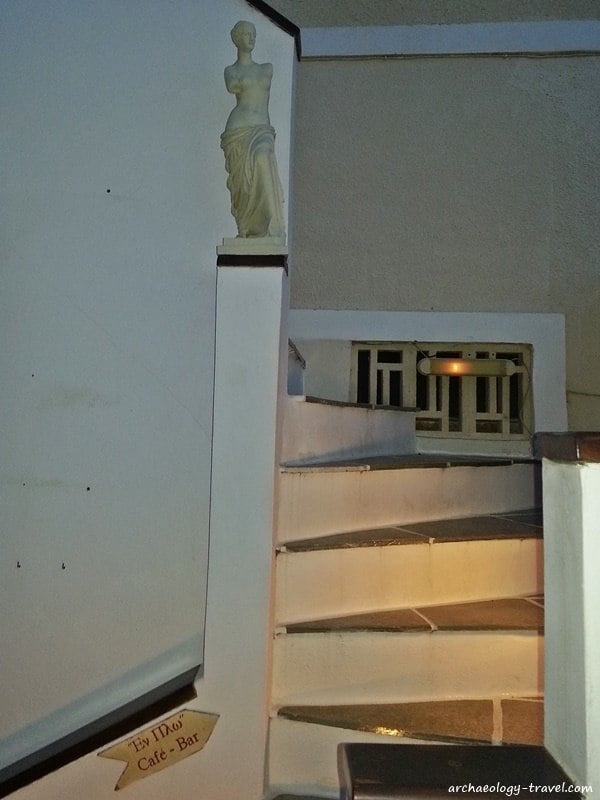 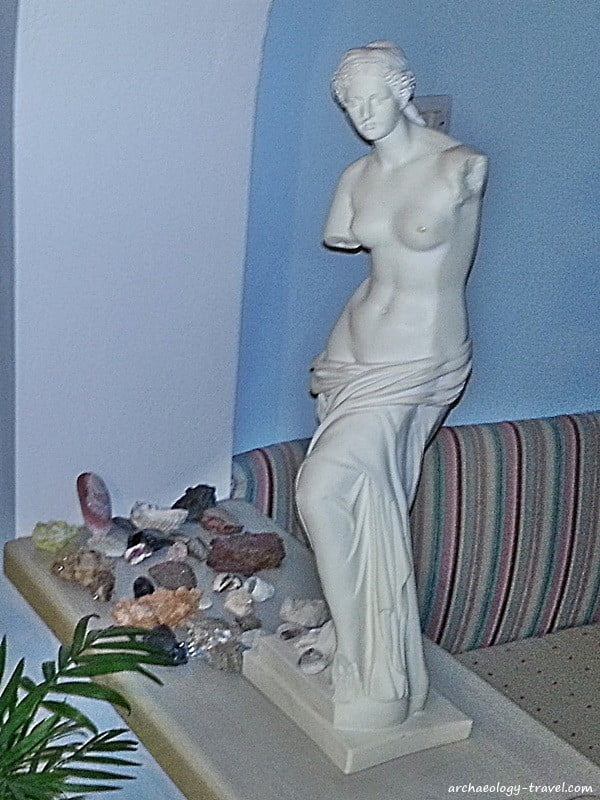 Small replicas of the statue, the kind you might see at a garden centre, are not uncommon on Milos. The hotel I stayed at had one pride of place in the lobby. Nearby, one of the many characterful bars had a replica on the outer staircase. These are very much smaller than the original, some less than a metre in height (the original is just over two metres high). When I pointed to the replica in the hotel and “Aphrodite of Milos”, the owner beamed. To me these reproductions felt quaint and matter of fact rather than tacky. They seemed to be more of a reflection of the islanders’ pride rather than a vulgar attempt to cash in on the worldwide popularity of the sculpture.

On anything from Olive Oil to Ouzo 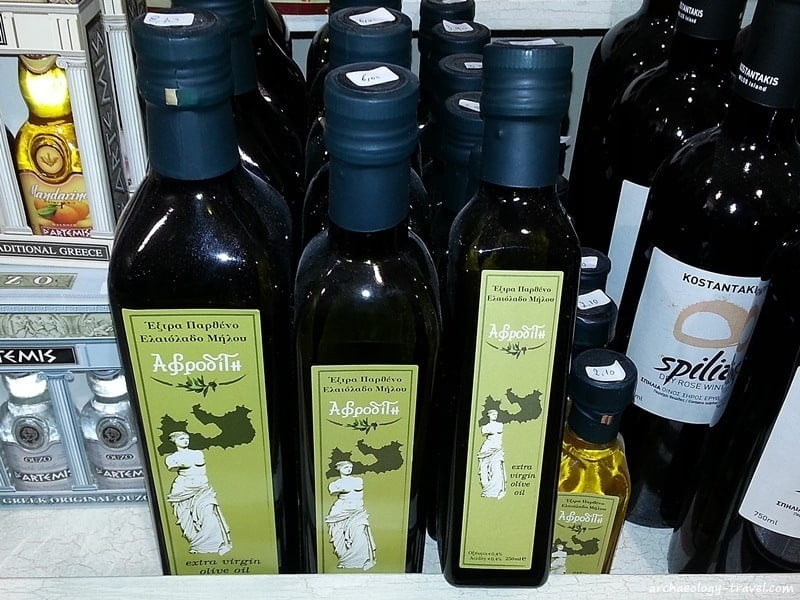 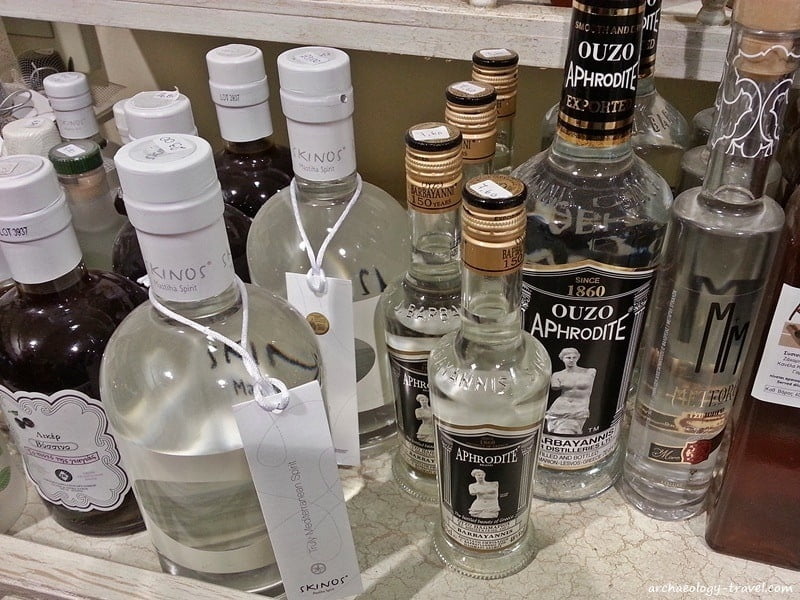 Aphrodite of Milos, with a Contemporary Twist 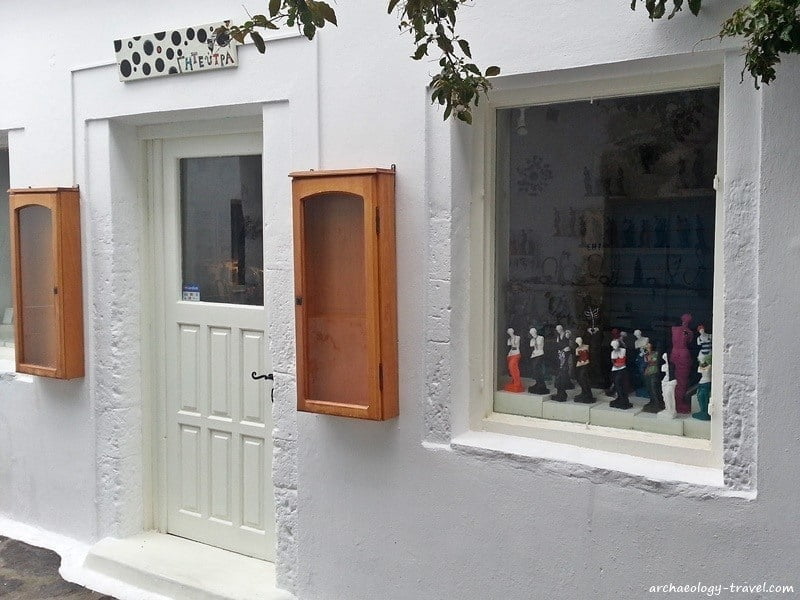 While small-scale replicas and reproductions of the Venus de Milo were common on the island, I did not see the usual type of tourist-targeted souvenirs. Which I did expect. Or, I would not have been surprised to see key-rings or snow globes and the like. If I am honest I would probably have bought one.

Wandering around the narrow streets of Plaka after an evening meal, I came across a small shop that sold small, wonderfully decorated statuettes. Each one was different, and very contemporary. Some quite simple, with a tie or a camera painted on the body, others much more elaborate and wearing something we would expect to see on Madonna.

An entire shop filled with differently decorated statuettes. Despite the shop’s seeming back-alley location, the statuettes in the window still made a bold visual statement in the streetlight. Here is the island reclaiming the Venus de Milo.

Sadly when I returned the following day, the shop was still shut. 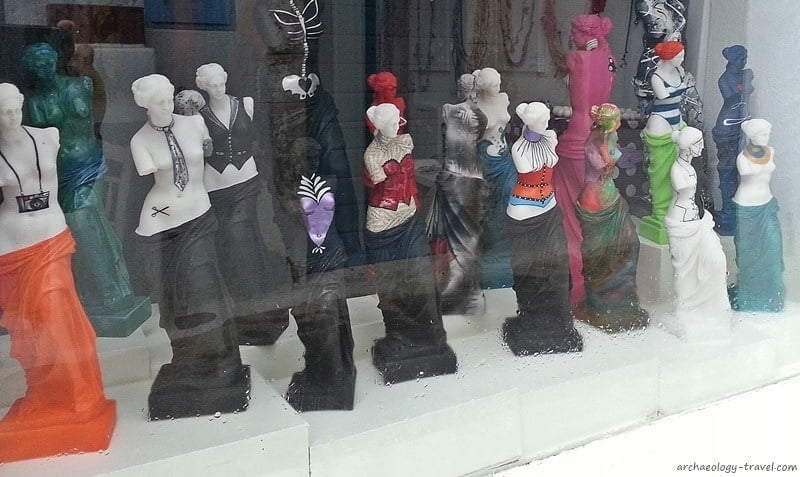 And this is where the Venus de Milo was found. 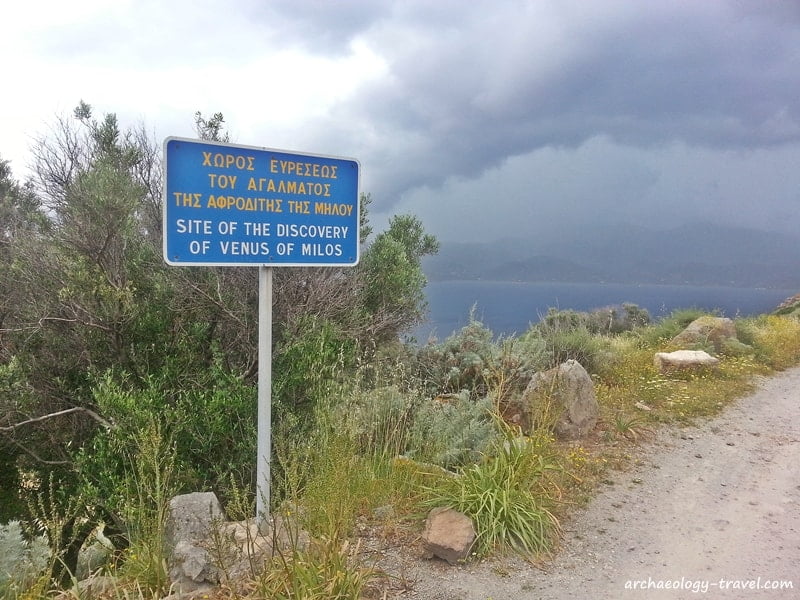 Given the international profile (she has more than one Twitter account), and that there are replicas and reproductions all over the island, I was slightly surprised that there was so little to the find spot. My guide had warned me, it was only a sign on the side of a dirt track – well, she said it much more disparagingly than that. And her embarrassment was only surpassed by wanting to demonstrate how neglected and shameful the site really was.

The find spot is in fact the ruined ancient city of Milos, of which there is very little to see. Without a map of the site it would be difficult to make out many features. The limestone has long since been carried away and incorporated into other, younger buildings – as was so commonly done on the islands. But walk a bit further along the dirt track and besides the beautiful view over the Aegean Sea, look down and there is a small theatre. Now that is being restored, and should make a return visit to Milos worthwhile. 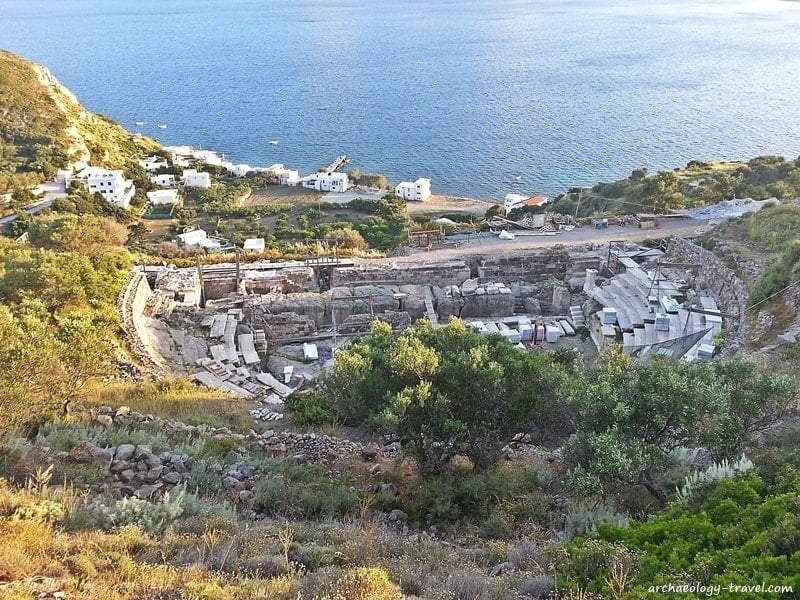 Visiting the Island of Milos, Greece 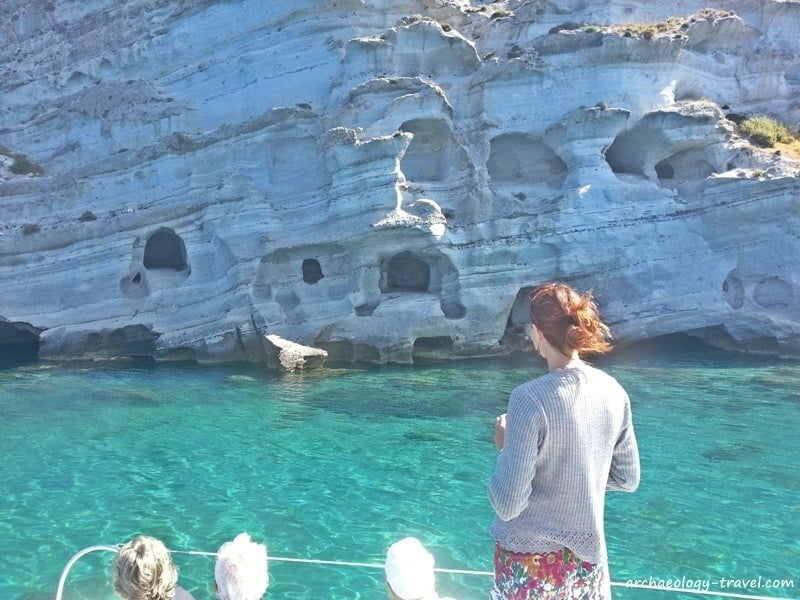 The volcanic island of Milos not only has varied and dramatic landscapes as a result of the volcano, the vast deposits of high quality obsidian has meant the island played a significant role in the history of the Aegean and beyond. Of particular note is the archaeological site of Phylakopi, and the Archaeological Museum of Milos where the extraordinary artefacts excavated from this site are now on display. Milos is quite large, and so a vehicle is essential to get around. But by far one of the most memorable experiences I have had was a day trip around the island on a catamaran … read about that day here Ancient and Vocanic Landscapes of Milos

Read more on why the Aphrodite of Milos is called the Venus de Milo, and is now in Paris.

For my brief but wonderful three days on Milos, I was the guest of the island’s municipality and the Hotel Aeolis. The hospitality on Milos was as good as I have experienced on any of the other islands, and I have no hesitation in recommending Milos being included on an island hopping itinerary in the Cyclades – whether for archaeology or just a relaxing holiday.