Hadrian’s Wall was a heavily fortified defensive structure that ran from coast to coast for 73 miles across the north of England. With its forts, milecastles and turrets, the wall is presented as the ultimate expression of the power of Rome and the Empire’s military might. With this militaristic image in mind, the abundance of exquisite objects including many carved stone sculptures on display at the various points of interest along the wall can be a wonderful surprise. 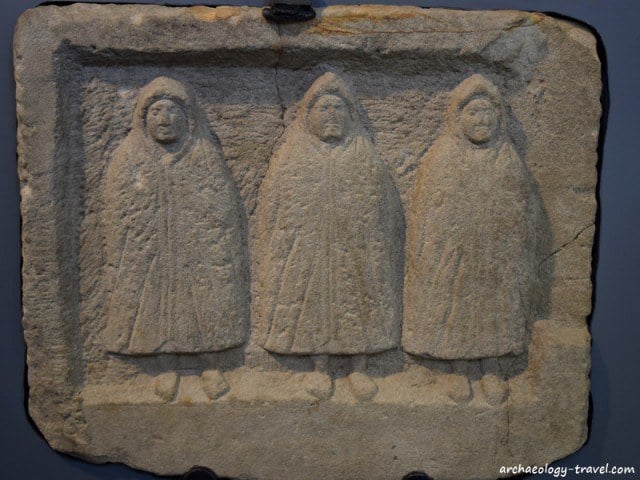 Genii Cucullati, on display in the Housesteads museum.

This carved relief depicting the Genii Cucullati is one artefact I was consciously hoping to see during my time on Hadrian’s Wall. Although it is not the most well known of pieces of Romano-British art, I have nonetheless seen it illustrated a few times before. Given my professional background in prehistoric and ancient art, for me this artefact sums up much of our study of images from the past. Here we have what seems to be a straight-forward depiction of three men wearing hooded cloaks. Off-the-cuff remarks make a joke about their clothing being appropriate for a rainy climate in the north of England. Similar images found across Europe suggest this carving shows the enigmatic hooded spirits connected to a Romano-Celtic religion. But we do not know what the image means, or why it might be relevant in any given context.

Finally getting to see the carving, sadly I was not gifted with any great revelation about the significance of the image. Perhaps because I was more struck by how this is just one of many great pieces of sculptured stone found on Hadrian’s Wall. Looking back on visiting sites and museums over the last ten days, without doubt the greatest surprise for me has been the number of extraordinary artefacts related to life on the wall. Objects we might label as ‘art’ today.

My surprise is as much a product of our times as it is my ignorance of the archaeology of this particular Roman frontier. We do not usually associate active military campaigns with art. But for the soldiers stationed on Hadrian’s Wall, from all over the Roman Empire, these objects were not simply decorative items to pretty the place up a bit. On the contrary, they played an active role in religious practices observed by the soldiers. These objects were a crucial aspect of their daily lives.

In this blogpost I have brought together 11 stone carvings that caught my attention. They are not the most important objects. They are not the best examples of their type. They are simply objects I like, and they represent the tip of the proverbial iceberg of what there is on display in the various museums along the Wall. I am sure others would choose a different set. In due course, these others will appear elsewhere on this site. Enjoy! 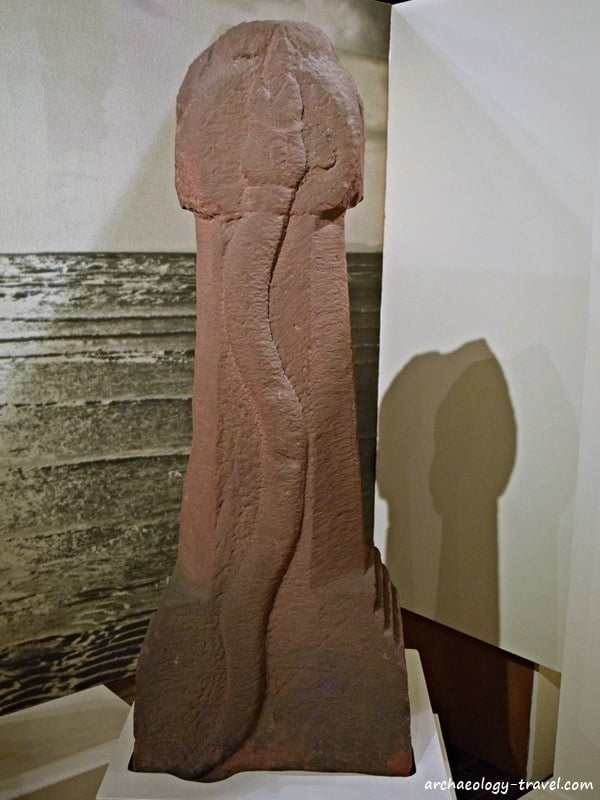 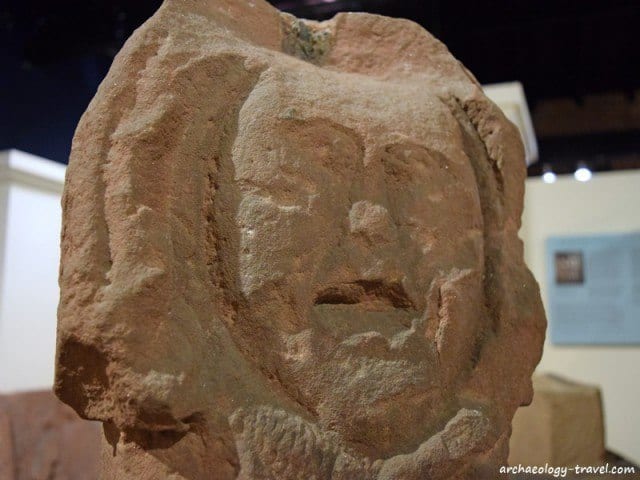 The reverse side of the serpent. 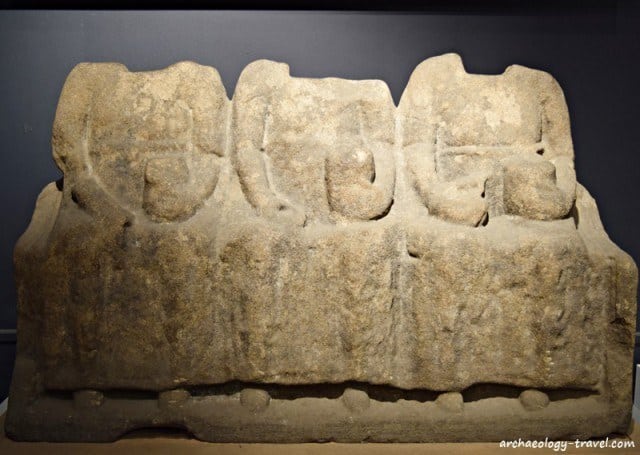 The matres, or mother goddesses. 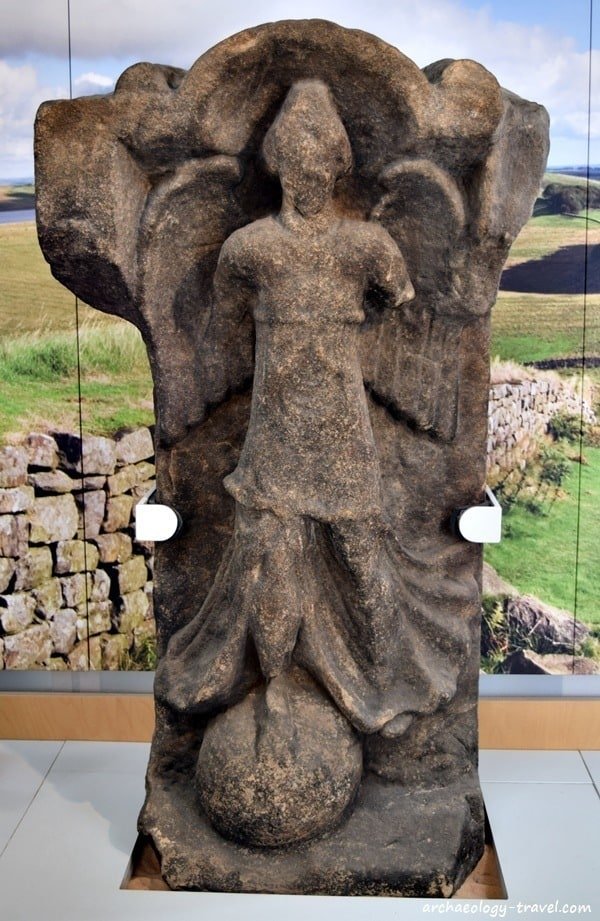 Four such statues of Victory have been recovered from Housesteads Roman Fort. 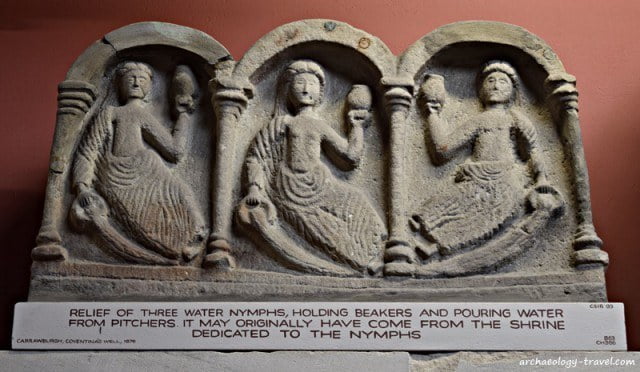 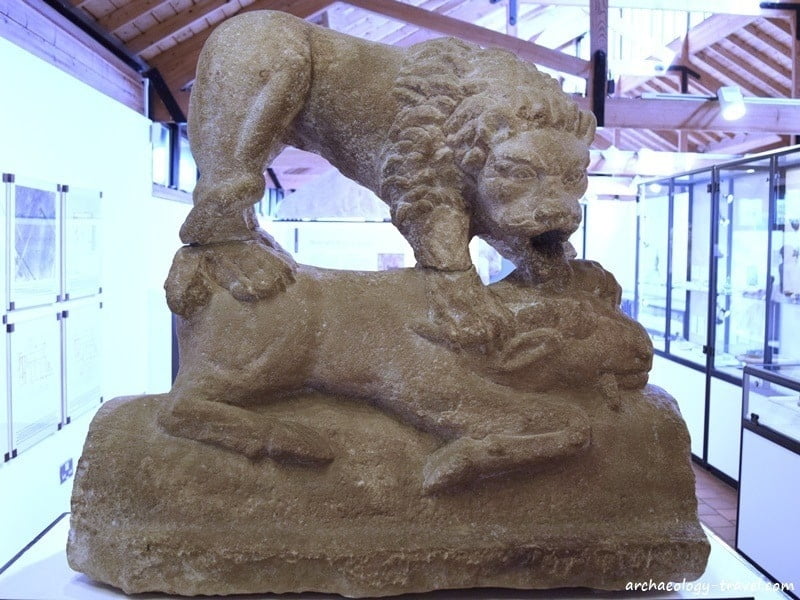 A male lion stands on the back of a fallen goat.

A relief thought to have once adorned a temple in the Roman town of Coria. 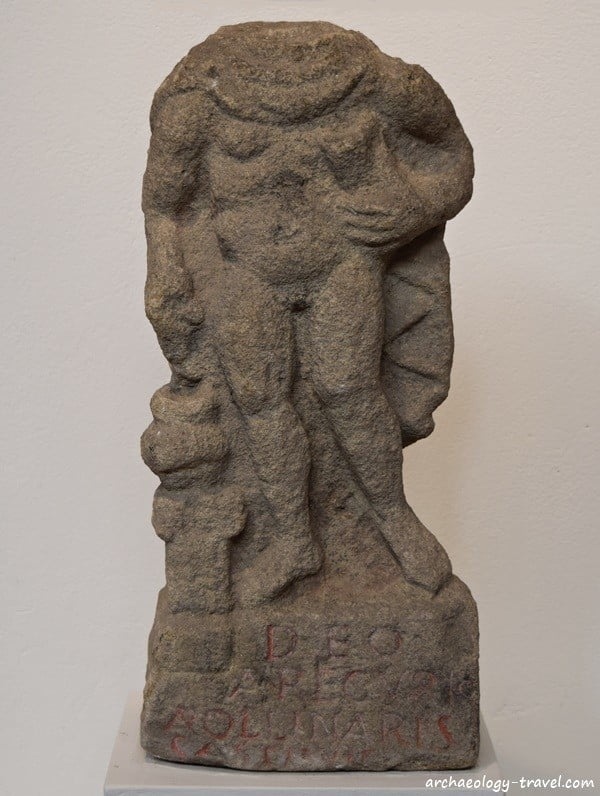 A statue of Arecurius, a native Briton god of the underworld. 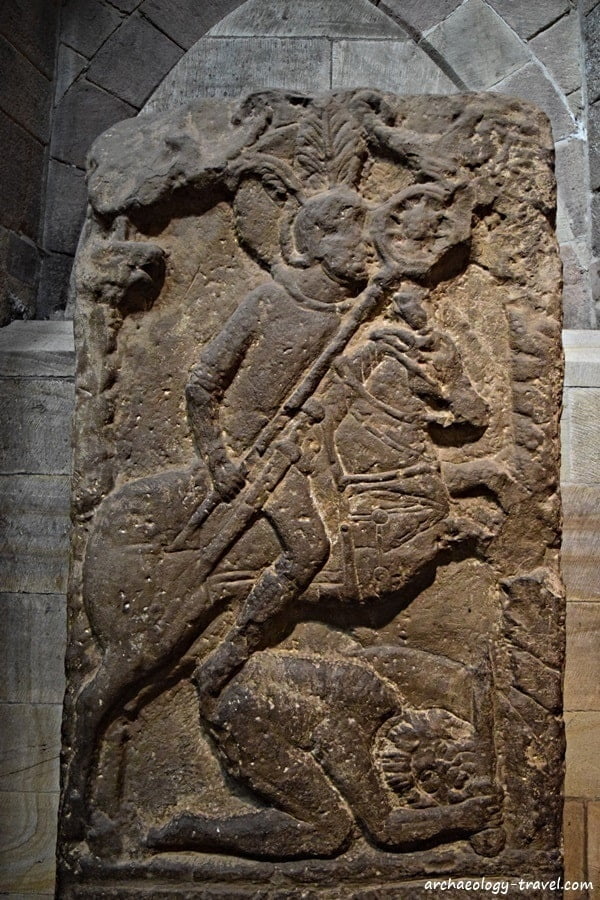 A Roman tramples a Briton. 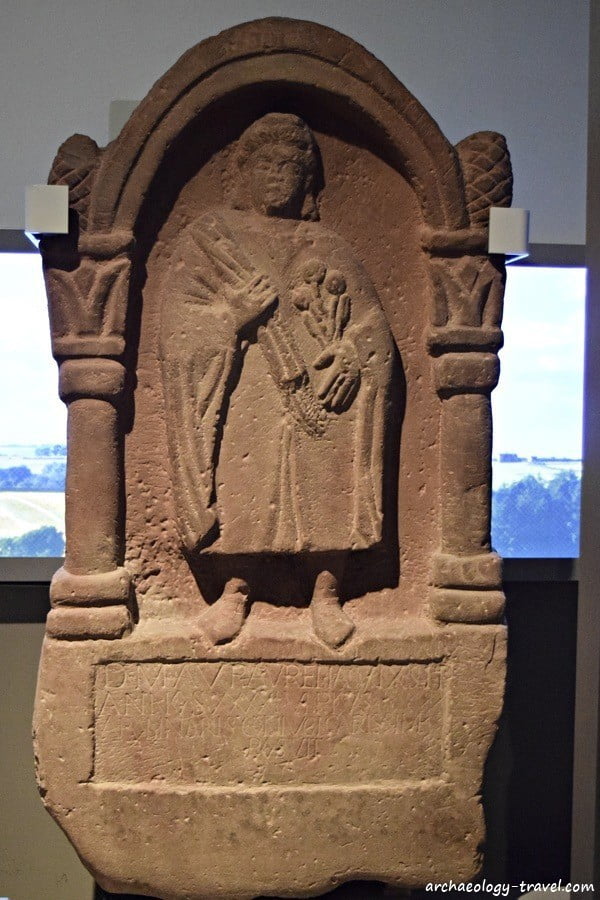 Tombstone of Aurelia Aureliana, from Gallows Hill in Carlisle. 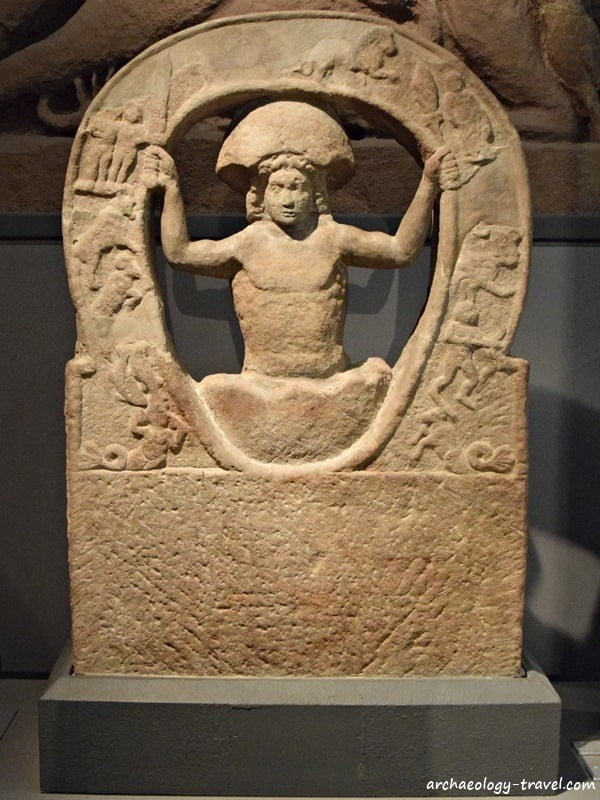 Mithras emerging from the cosmic egg, surrounded by signs of the zodiac. 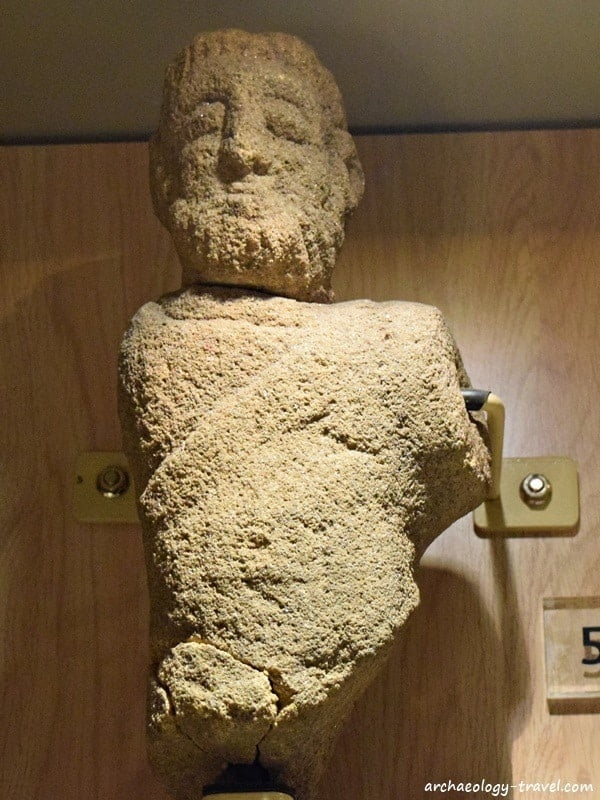 Mars, the Roman god of war.

And there is more …

Not only are there many more such stone sculptures on display in Wall-related museums, there are also many other kinds of artefacts, just as wonderful to see. When visiting the onsite museum at Arbeia, for example, I was drawn to these beautiful ornamental brooches (below). They are tiny, only a few centimetres in size. The two examples shown here are typical of the kind of brooches that became fashionable in the early third century. Brooches were used to fasten garments such as cloaks and tunics. In the third century they became brightly coloured through the use of enamels. Sadly, these exquisite pieces are no longer brightly coloured but they are every bit as interesting as any of the other more popular images we have of Hadrian’s Wall.