In the north-east corner of England, on the northern side of the Tyne River is the city of Newcastle upon Tyne. Newcastle takes its name from the castle that was built in 1080 on what was the Roman fort of Pons Aelius. This fort marked the eastern-most point of Hadrian’s Wall until the Wall was extended eastwards to Segedunum. Besides this fascinating Roman and Norman history, today Newcastle and Gateshead, its sister city across the Tyne River, frequently feature in top ten lists of European cities with a vibrant night-life; with everything from lively bars to a long standing theatre tradition. Newcastle is also known for its international range of cuisines, and is gaining a reputation for some premium restaurants with top chefs. Situated on the A1 motorway and a principal stop on the East Coast Mainline, the ease of getting here by rail or road makes Newcastle a perfect city for an interesting and enjoyable weekend break.

Coming out of Newcastle, one of the first surviving sections of Hadrian’s Wall (on the right of the road) at the start of the A69, Denton West.

At the beginning of August I enjoyed a weekend in Newcastle exploring its history and sampling its culinary reputation. Having only come into the city to see the Great North Museum and the Roman forts of Segedenum and Arbeia, this was a weekend I anticipated with delight. And it definitely did not disappoint. I arrived late Friday afternoon by train and checked into the Sleeperz budget hotel, which was only a ten minute walk from the station – if that. Bright blue skies the following morning got me up early and out visiting the city’s Medieval sites, after a freshly cooked full-English breakfast of course. Just before lunch I met up with a group of travel bloggers and we all headed out to Hadrian’s Wall. We got to see a re-enactments at Chesters Roman Fort and Museum, and were given a guided tour of Corbridge Roman Town.

Given this was the first weekend of the month, we were treated to an evening at the Boiler Shop Steamer – an appropriate evening out as this is where Newcastle’s industrial heritage meets contemporary street food and live music. After another comfortable night in what is surely one of the best budget city hotels I have ever stayed in, our group headed out to my favourite fort on Hadrian’s Wall – Vercovicium, Housesteads to you and me. Standing at the north gate of Housesteads Roman Fort and looking north with a bit of imagination (thanks to the wonderful film in the onsite museum) you really do get a feeling of being at the ‘edge of Empire’. Done with the archaeology, we headed back to Newcastle for lunch in a shipping container. I kid you not!

As all good weekends do, this one passed by far too quickly. Without hesitation I can recommend Newcastle for a weekend break, particularly if you are interested in England’s Roman and Norman past.

Obviously a conglomeration the size of Newcastle and Gateshead, widely recognised for its history, culture, entertainment and night-life, has a great deal to offer its visitors – so much more than I can list here. To get a better idea of what Newcastle and Gateshead has to offer, check out the Newcastle-Gateshead website. If like me you enjoy exploring archaeology and history, here are my recommendations for things to do in and around Newcastle for a weekend end break there:

Newcastle was the site of the original eastern end of Hadrian’s Wall. It was here that a bridge was constructed across the Tyne River and named Pons Aelius, a name also given to the fort that guarded the bridge. Although there is nothing of this fort to see today, remains of it have been found beneath the Castle. Opposite Black Gate, the Castle’s Barbican or gateway, is the start of Westgate Road, which takes it name from the west gate of the fort. Beneath the Newcastle Arts Centre, on Westgate Road, the remains of the first Milecastle were discovered. The road continues west following what was the line of the wall, becoming West Road – alongside of which are the first visible remains of the Wall and associated features (marked on the map below). Do not overlook Benwell Roman Temple and Vallum Crossing.

As interesting as these meagre remains are, the archaeological sites that attract thousands of people a year are a bit further beyond the boundary of the Newcastle area. Zoom out on the map above to see a few of the more popular sites managed by English Heritage: Corbridge Roman Town, Chesters Roman Fort and Museum, Housesteads Roman Fort, Birdoswald Roman Fort. 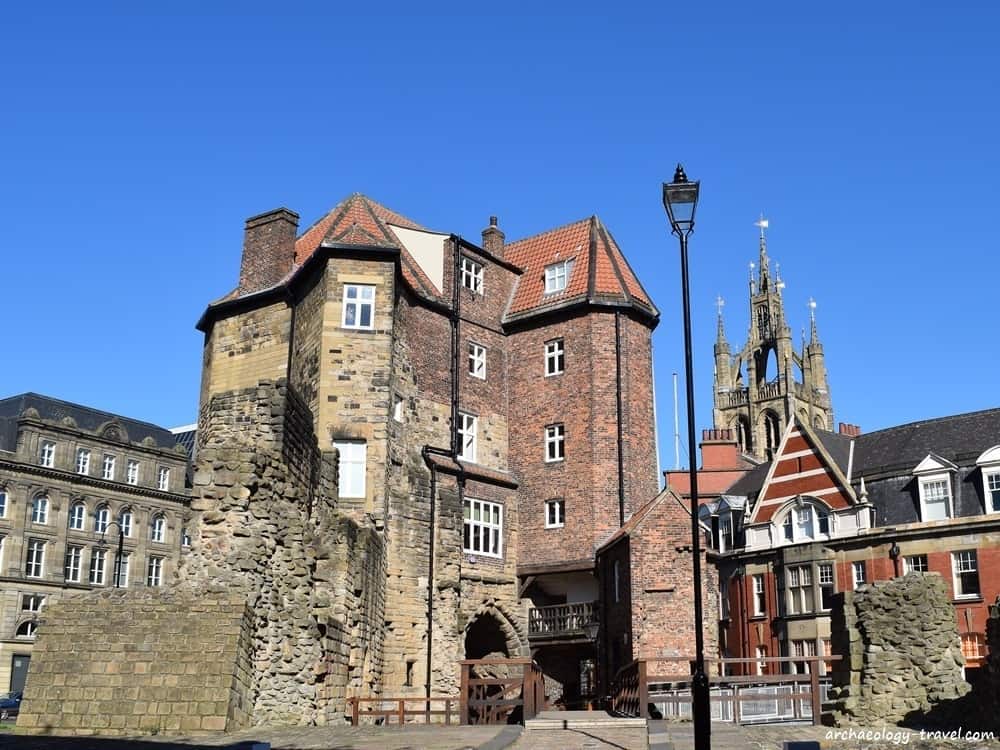 Although separated by a major railway line, but linked by underpasses, the Castle Keep and Black Gate were once part of a single Medieval fortress. This is the site of the Roman Fort, Pons Aelius, on which William the Conqueror’s eldest son Robert Curthose built a wooden motte and bailey castle in 1080 AD. And it was this Norman castle that was the ‘New Castle upon Tyne’. Nothing of the mound and tower from the New Castle has survived as it was replaced rectangular stone keep with a stone bailey built between 1172 and 1177. The barbican, todays Black Gate, was added much later between 1247 and 1250. The Castle Keep and Black Gate are open daily (visitor details here). 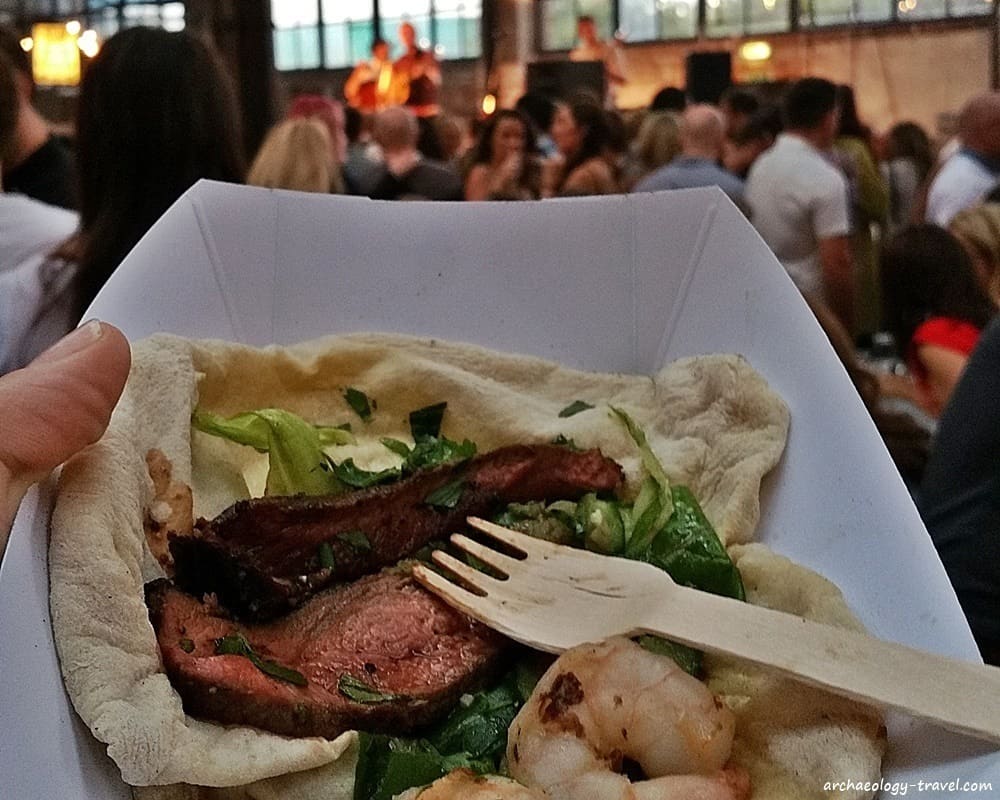 Street food and live music in the birth place of Robert Stephenson’s Rocket.

Should you want to stick to the ‘heritage theme’ for your weekend break in Newcastle, and you happen to be there during the first weekend of the month, the Boiler Shop Steamer is where you will want to be on Friday or Saturday night.

It was here in the early decades of the 1800s that Robert Stephenson built the Rocket, the steam locomotive that became the model for locomotives for the following 150 years. You will not see the Rocket here; it has been preserved but is now on display in the Science Museum, London. Rather Stephenson’s old boiler shop now provides the venue for a vibrant monthly event that brings together live music and some of the UKs leading street-food vendors. And whether it is local ales you want to try or an extensive range of cocktails, they have you covered. Jack’s Gin Palace produces some of the best gin-based cocktails I have ever tried.

Saving the Best ’til Last – the Cook House 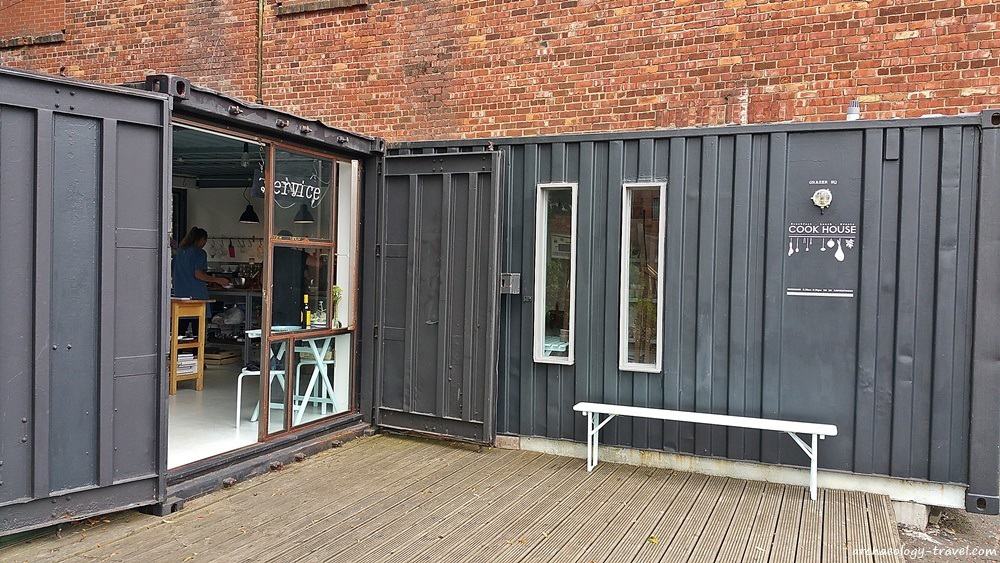 From shipping container to Cook House.

As Napoleon said, “an army marches on its stomach”, so after after visiting Housesteads the army of travel bloggers hosted by English Heritage and the Newcastle Gateshead Initiative were treated to a final meal at the Cook House. Anna Hedworth, aka the Grazer on Twitter, Facebook and Instagram, has converted two shipping containers into a rustic little eatery that serves breakfast and lunch and other private functions. 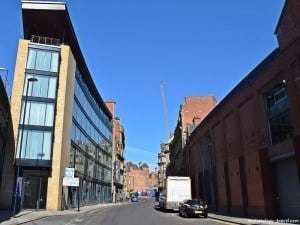 Not surprisingly Newcastle has a good selection of hotels, to suit all pockets and purses. For my weekend in Newcastle, I stayed at relatively new Sleeperz Hotel. This stylish, budget hotel is centrally located, which can not be much more than ten minutes from the train station. Maybe this is just my bad luck, but I do not seem to have much success getting a decent night sleep in hotels that are in busy city centres – no matter how comfortable the bed is. Once the pubs and clubs close and the late night revellers have made their way to their beds, I usually only manage a few hours sleep before the dustbin lorries and street cleaning crews kick into action. I can honestly say my two nights at Sleeperz in Newcastle (Friday and Saturday) were the best two nights sleep I have ever had in an inner city hotel. There was no noise from the street, or other guests staying in the hotel. After a soundless night on a comfortable bed, their buffet-style breakfast was just what was needed to sett me up for a day sightseeing. See more photographs and book your stay at Sleeperz Hotel. 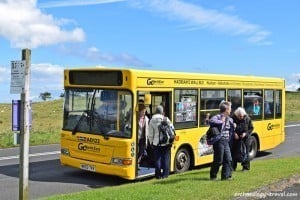 For the responsible tourist, Newcastle and Hadrian’s Wall is your ticket. As I mentioned above, Newcastle is a principal stop on the East Coast Mainline, under three hours from London and around two and a half hours from Manchester. Then, getting to some of the best sites along Hadrian’s Wall is also possible by public transport. The rail line between Newcastle and Carlisle stops at a number of towns from which many points of interest are accessible.

Between April and September (inclusive), use the AD122 Hadrian’s Wall Country Bus service. Starting at Eldon Square Bus Station in Newcastle, this award winning, sustainable bus service stops at many of the forts and sites along the wall as well as the many towns and villages between Newcastle and Haltwhistle Station. (Details about the AD122 bus service, including a downloadable map and timetable, and buy your ticket online.) Buy a Hadrian’s Frontier ticket on any Go North East bus, then from Newcastle catch the X84 or X85 service to Hexham where you board the AD122. Hop-on, hop-off all day with just one ticket. Buses serve the following sites: Chesters, Housesteads, Vindolanda, Twice Brewed (for Sycamore Gap), Roman Army Museum & Walltown, with buses regularly 7 days a week until Sunday 25th September. Presenting the ticket gets you a 10% discount to some of the sites, such as: Vindolanda, Roman Army Museum, Housesteads and Chesters Roman Fort.

The Great North Museum is in Newcastle city, about a 20 minute walk from the station, while the two other forts, Segedenum and Arbeia, are easily accessible via the city’s metro.

Take a look at the map below and see for yourself just how accessible the various places mentioned above are.
[mappress mapid=”287″]