Studying archaeology in South Africa not surprisingly focusses on the archaeology of Africa, more particularly sub-Saharan Africa. Classical archaeology simply did not feature in my undergraduate degree course. So when I moved from South Africa to England I knew very little about Britain or Europe’s Roman past. Through the research of a few archaeologists and/or classicists working on the Roman period, Mary Beard and Sarah Scott immediately spring to mind, I became quite interested in certain aspects, mostly the art. And, in getting the archaeology of France on to Archaeology Travel this year my interest in the Roman period has only widened. I was delighted then when asked to write a review of a guide to the Roman archaeology of Provence just published by Signal Books. A review copy arrived a few days ago, and I have not been able to put it down.

Provence is to the south of France what Normandy is to the north. And, just as the name Normandy derives from foreigners (Northman, or the Vikings) so too does Provence. It was Julius Caesar who first described the region as the province of Rome, following the occupation of the area by the Romans at the end of the second century BC. This new territory of Rome’s was in fact the first Roman province outside of Italy. But, during these times the area was much larger than France’s Provence is today.

Provence is a popular tourist destination, an area of striking contrasts that attracts visitors from all over the world. Breathtaking mountains with small and tranquil, hilltop villages could not be more different from the opulence and expanse of some of the bigger cities dotted along the Mediterranean coastline. The area is particularly known for its vast panoramas, wide open skies, and fields of lavender. The colloquial, tourist Provence is situated in an administrative region of south eastern France known as Provence-Alpes-Côte d’Azur, from the mouth of the Rhône River to France’s border with Italy. When occupied by the Romans the area was called Gallia Narbonensis, or Provincia Nostra, Latin for ‘Our Province’, or more simply Provincia, and stretched from the Alps in the east to as far west as the Pyrenees, and from the coast to as far north as Lyon up the Rhône Valley. The administrative capital was the town of Narbo Martius, present-day Narbonne.

Although Edwin Mullins focuses on present-day Provence and the neighbouring Languedoc, his history and guide to the Roman Provence rightly extends beyond what was the heartland of this Provincia to include the Pyrenees in the west, the Riviera and the Alps in the east, and Lyon and Vienne to the North. He could not really have done otherwise; for as he demonstrates so well, while the Provence of today is as fascinating for its history as its cuisine and geography, that history can only be appreciated within the wider context of the Roman Provence. 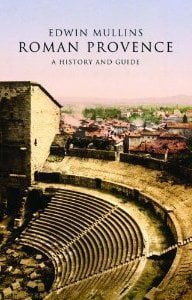 As the subtitle implies, Mullins’s Roman Provence is no simple guide; it is first and foremost a history. But as a writer and a journalist Mullins has perfected the craft of making the past readable and engaging. Although roughly chronological, the first three chapters cover the beginnings of the expanding Roman Empire to the conquest of the region while the last two chapters deal with the conversion to Christianity and post-Roman Provence, the bulk of the book and the must see attractions are arranged thematically, so there are chapters on the aqueducts, cities, roads and bridges, temples, and theatres and amphitheatres. Each one of these thematic chapters builds on its predecessor to provide an overall picture of a changing political region that was becoming increasingly prosperous as the Romans introduced and imposed new ways of living on the native Gauls. The stories of the various monuments and architectural features that still remain for us to visit today have been carefully woven together to provide an interesting account of the history of the Romans in Provence.

One of the features of the book I particularly like is the way in which the chapters all have their own ‘star attraction’, the must see archaeological site of that topic. And it is this that makes this book a guide as well as a history. Each chapter introduces its topic, explores the various aspects of its significance and its importance in Provence, and then closes in on one site that is explored in great detail, before we readers are drawn out again into the bigger picture with other examples. For the chapter on triumphalism, for example, we are directed to the spectacular triumphal arch at Glanum, for aqueducts naturally it is the Pont du Gard, while the Maison Carrée is understandably the must-see religious temple in the region.

I thoroughly recommend this book to at least two groups of people. Edwin Mullins clearly knows this region of France well, and knows something about the Romans, and as importantly how to make their history interesting and readable. If you enjoy visiting and exploring Provence, or if you are about to head off to Provence for the first time, and want to know something about this region’s past, specifically its Roman past, this book will certainly point you in the direction of some of the more spectacular and significant Roman attractions accessible today. Mullins’s book is also, I feel, indispensable for anyone interested in the Romans, their expansion into France, and where to go today to see the archaeology of this period. And of course, if you have an interest in the past, and have wondered what all the fuss is about with these Roman chaps, this is as good a book as any to start with.

Roman Provence: A History and Guide by Edwin Mullins, available on Amazon.com and Amazon.co.uk, is published by Signal Books (Oxford) has 192 pages with over 60 black and white photographs and 2 maps.