Just over one hundred years ago workmen digging in Cheapside, London unearthed what is now the largest cache of Elizabethan and early Stuart jewellery ever found. For the first time since its discovery in 1912, this exquisite and diverse collection of jewellery was the focus of a temporary exhibition in the Museum of London. This is our review of that exhibition.

Please Note: The exhibition has ended and the Cheapside Hoard is not on public display. A permanent display of the Hoard will be a feature of the Museum of London’s new museum in West Smithfield, which is scheduled to open in 2024. 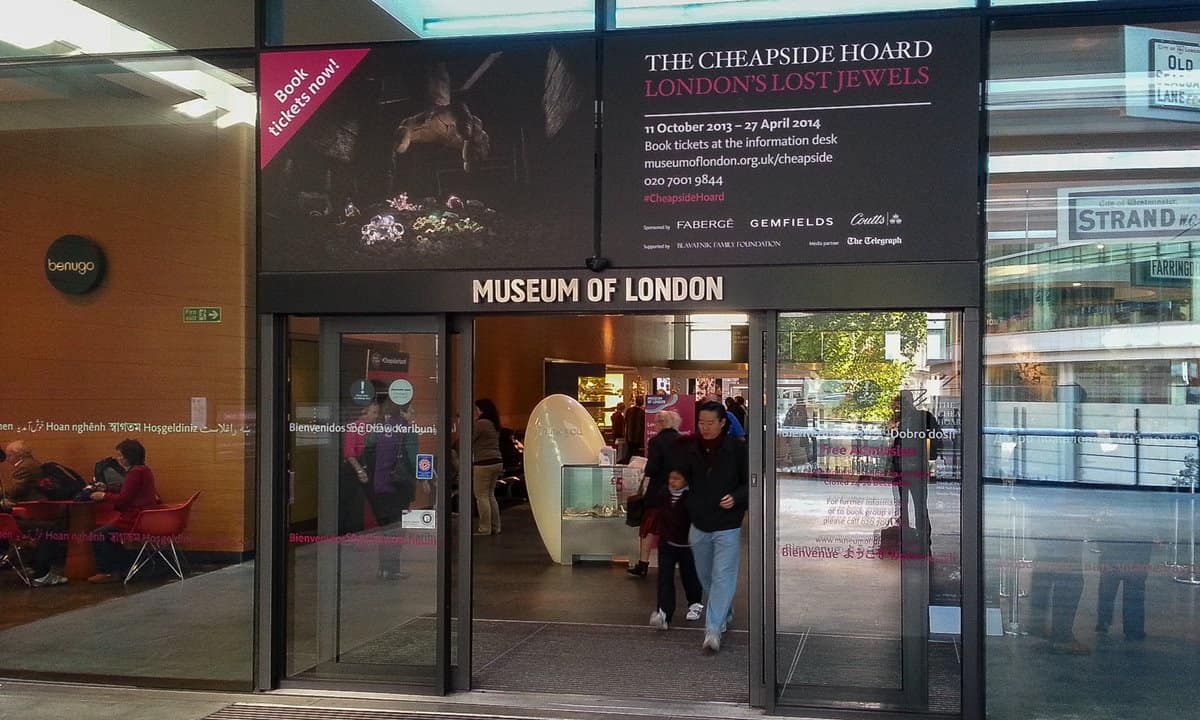 Although I can appreciate the aesthetics and social significance of jewellery, I am not particularly interested in jewellery. For a number of reasons, however, I was still very keen to see the Cheapside Hoard exhibit during my last visit to London. Not only has this hoard been widely hyped as an internationally important collection of artefacts, I also enjoy seeing how curators create interesting exhibitions out of challenging collections of artefacts. On all levels the Cheapside exhibit did not disappoint. This is definitely an exhibition any visitor to London with even the slightest interest in that city’s past should not miss.

The Cheapside Hoard was found by workmen on 18 June 1912, at what is One New Change – a high end shopping complex between Cheapside and Cannon Street.

The London Museum, as it was then, acquired the Hoard in 1912.

There are five items in the Victoria & Albert Museum and twenty five in the British Museum.

The Hoard is a jeweller’s stock-in-trade, and includes emerald from Colombia, amazonite from Brazil, ruby from Burma, diamonds from India, chrysoberyl from Sri Lanka, pearls from Bahrain.

There are almost 500 pieces, but it is thought some pieces may have been taken by the workmen.

The Hoard includes a cameo of Queen Elizabeth I and a small red intaglio stone seal that has the arms of William Howard, 1st Viscount Stafford.

There are also Egyptian, Byzantine and classical gems that had been in circulation for as much as 1,600 years, including an amethyst with the head of a Roman emperor.

It is generally accepted that the Hoard was buried during the English Civil Wars, 1642 to 1646. 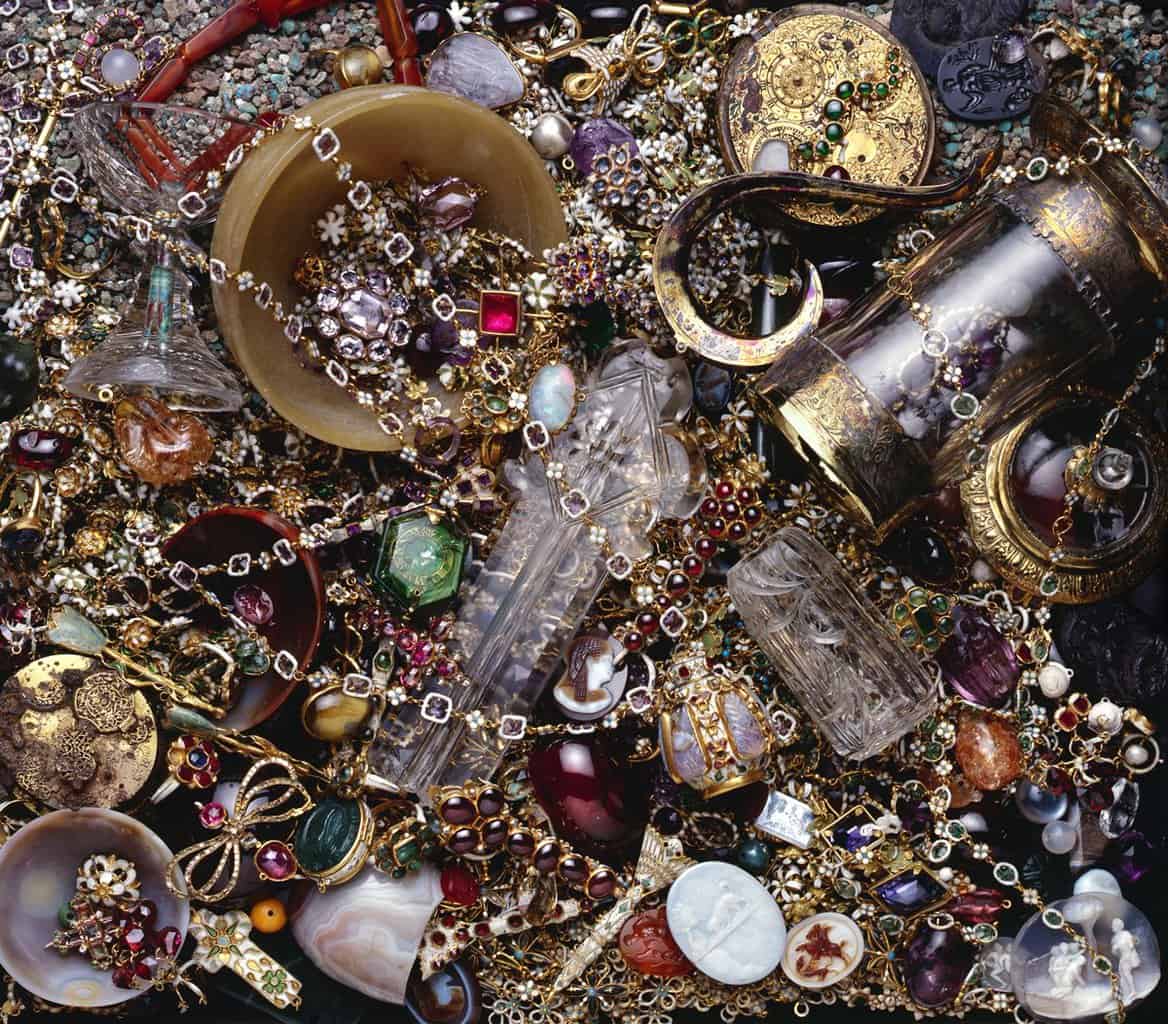 Just some of the pieces that make up the hoard – which contained finished and unfinished articles, loose gems and a variety of finished jewels. © Museum of London 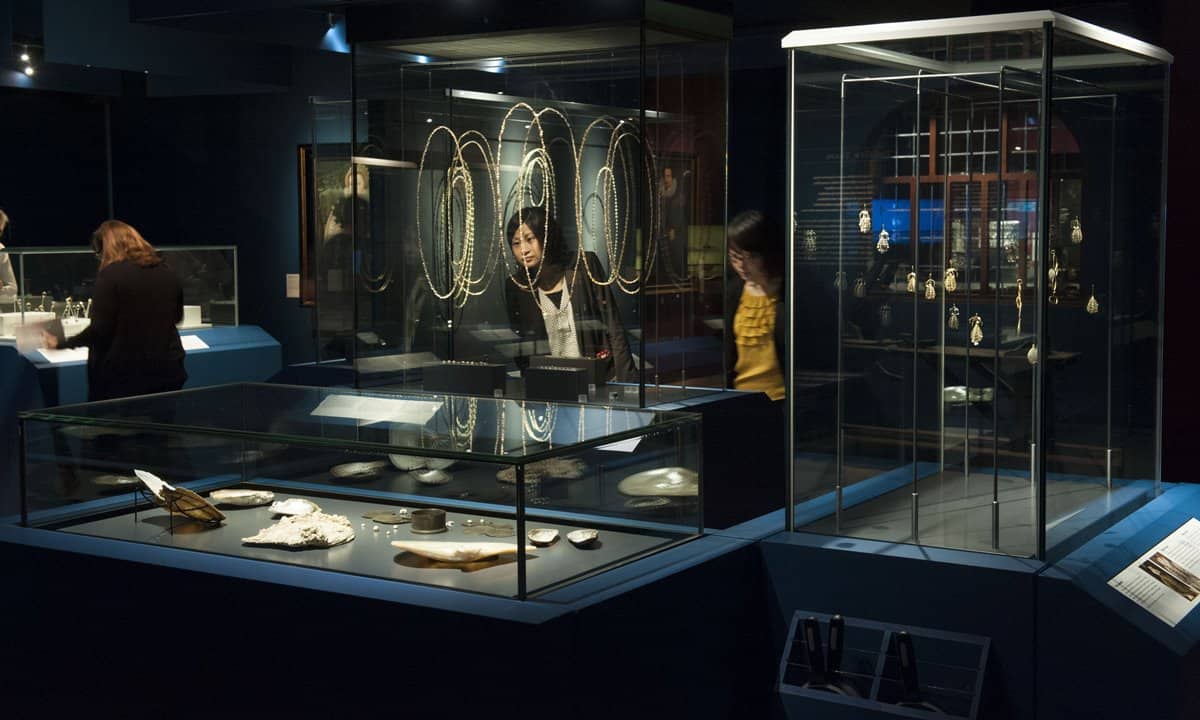 The exhibition of the Cheapside Hoard: London’s Lost Jewels. © Museum of London

The Cheapside Hoard was uncovered in 1912 by workmen during demolition work at a property in Cheapside, London. The property had belonged to the Worshipful Company of Goldsmiths for centuries. The collection of jewels and gemstones, placed in a wooden box, were buried beneath the cellar floor, sometime after 1640 but before the Great Fire of London in 1666. Although the building perished during the fire, the cellar and what lay beneath it, survived but was covered over with a brick floor during subsequent construction work. And there the hoard stayed until the early twentieth century; whoever buried it did not come back to claim it.

The hoard in its entirety represents the stock-in-trade of a working goldsmith: both finished and unfinished articles, loose gems and a variety of finished jewels, including chains, rings, and even Byzantine cameos. And it is the presence of the so-called ‘Stafford Intaglio, a cornelian lozenge shaped gen with an engraved heraldic badge of William Howard, Viscount Stafford, that provides the crucial information for dating the burial of the hoard.

The Hoard has some magnificent examples of 16th and early 17th century jewellery. And with nearly 500 objects in the hoard, it is an incredibly diverse set of artefacts. The diverse range of objects is itself quite something to take in. Singling out a few of these to represent the collection is difficult if not impossible.

As someone who loves detail in the miniature, I was already taken by the Salamander Brooch before even visiting the exhibition. Just look at the object being held between two fingers. It is a truly beautiful piece of craftsmanship. 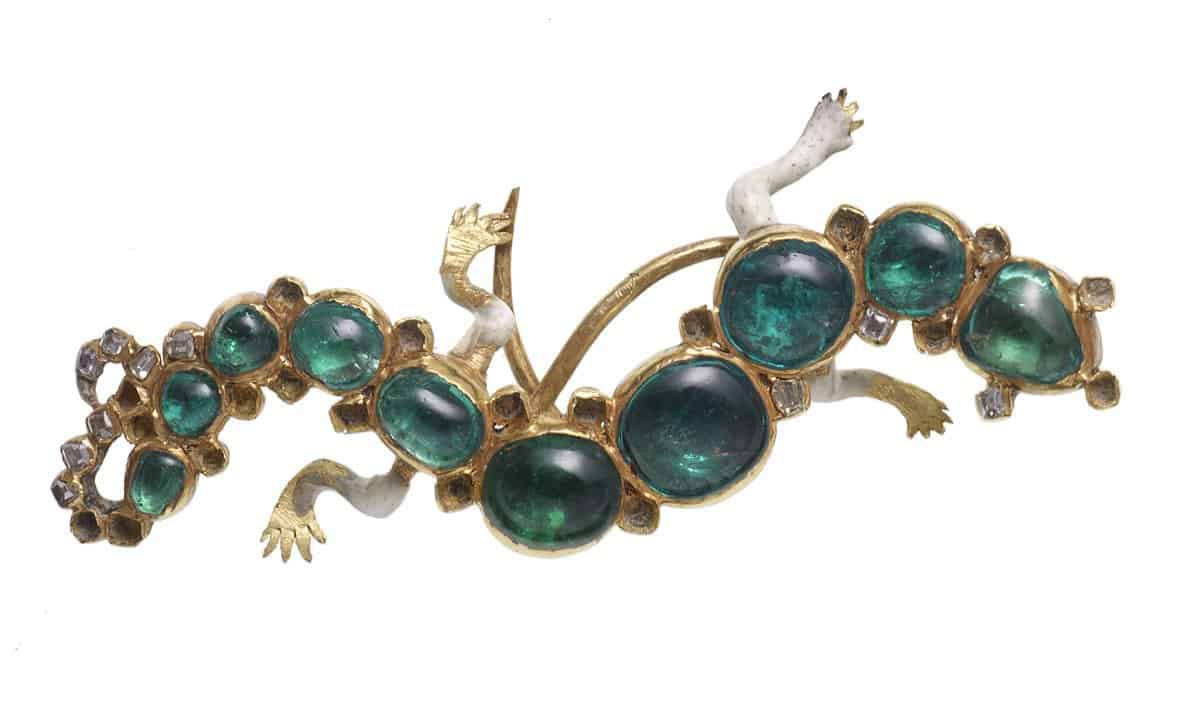 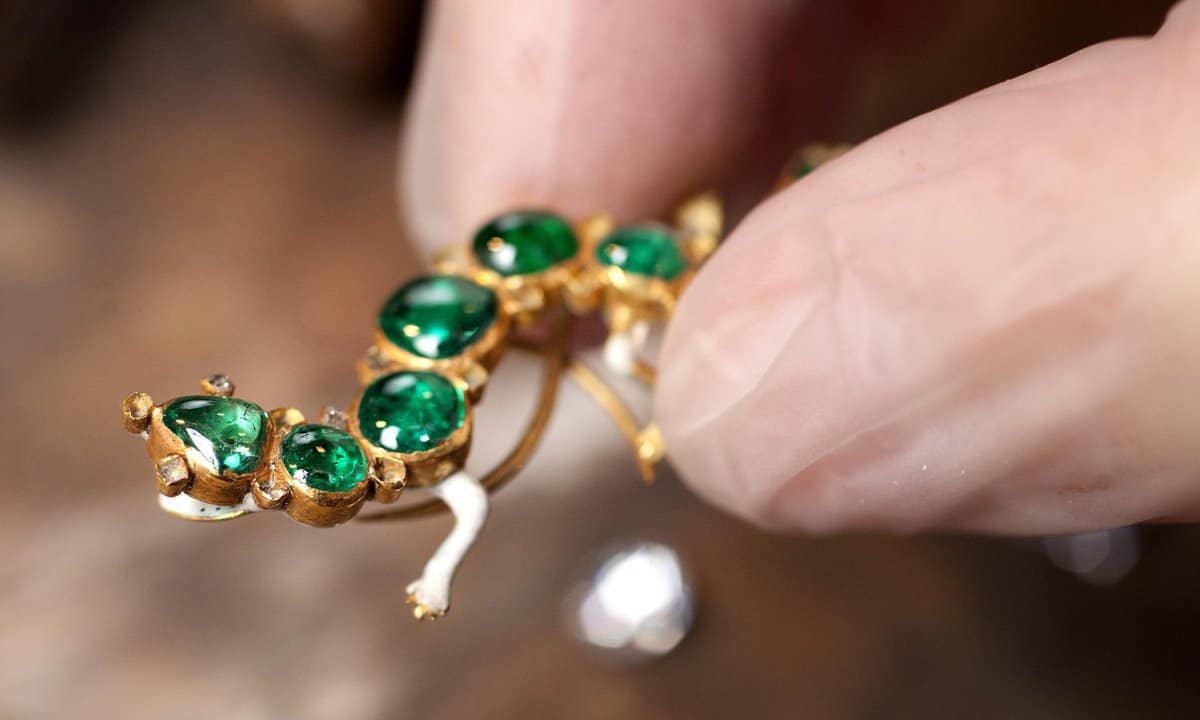 The Salamander brooch, gold set with emeralds and diamonds, a star object © Museum of London

As stunning as the salamander is, the piece that had me returning to it again and again was the Gold and Pearl Ship Pin. 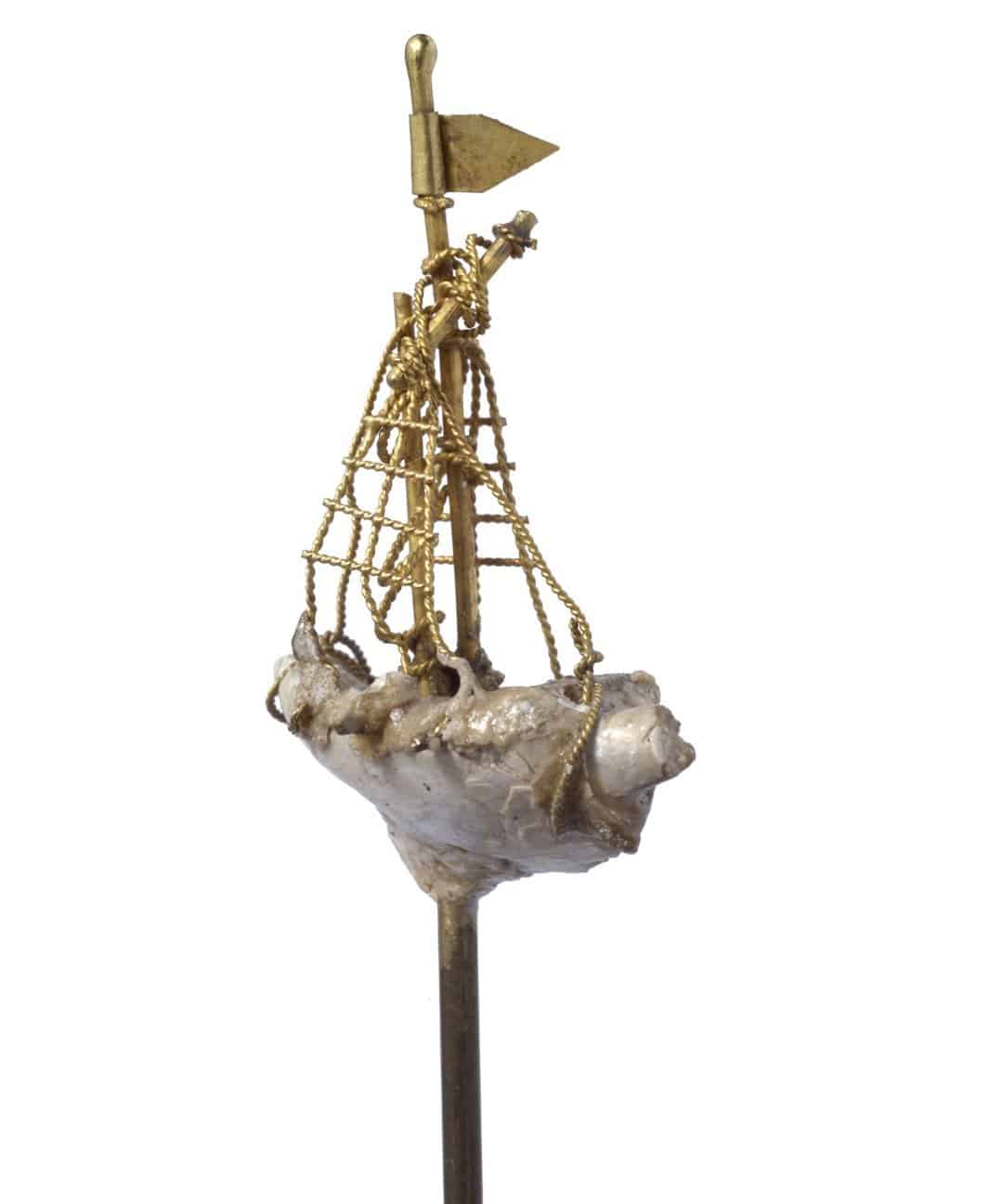 A blister pearl makes up the body of a ship, with additional gold mast and rigging. The pennant of the mast rotates when the jewel is moved. (The shank is a 20th century addition.) © Museum of London

The ship pin and the salamander brooch really are tiny pieces. But the curators have done a number of things to help visitors see the size but also appreciate the minute detail. First, large and strong magnifying glasses have been provided to allow you to magnify the object (you can see these alongside a display case in the photograph of the exhibition gallery above). These are a wonderful aid and well worth it to get a closer look at some of the objects on display.

Second, scattered around the exhibition are a number of video presentations in which some of the objects have been magnified to show the fine detail. In some instances, the video presentation has been used to show how objects were made – as in the case of the pearl pendants (below). 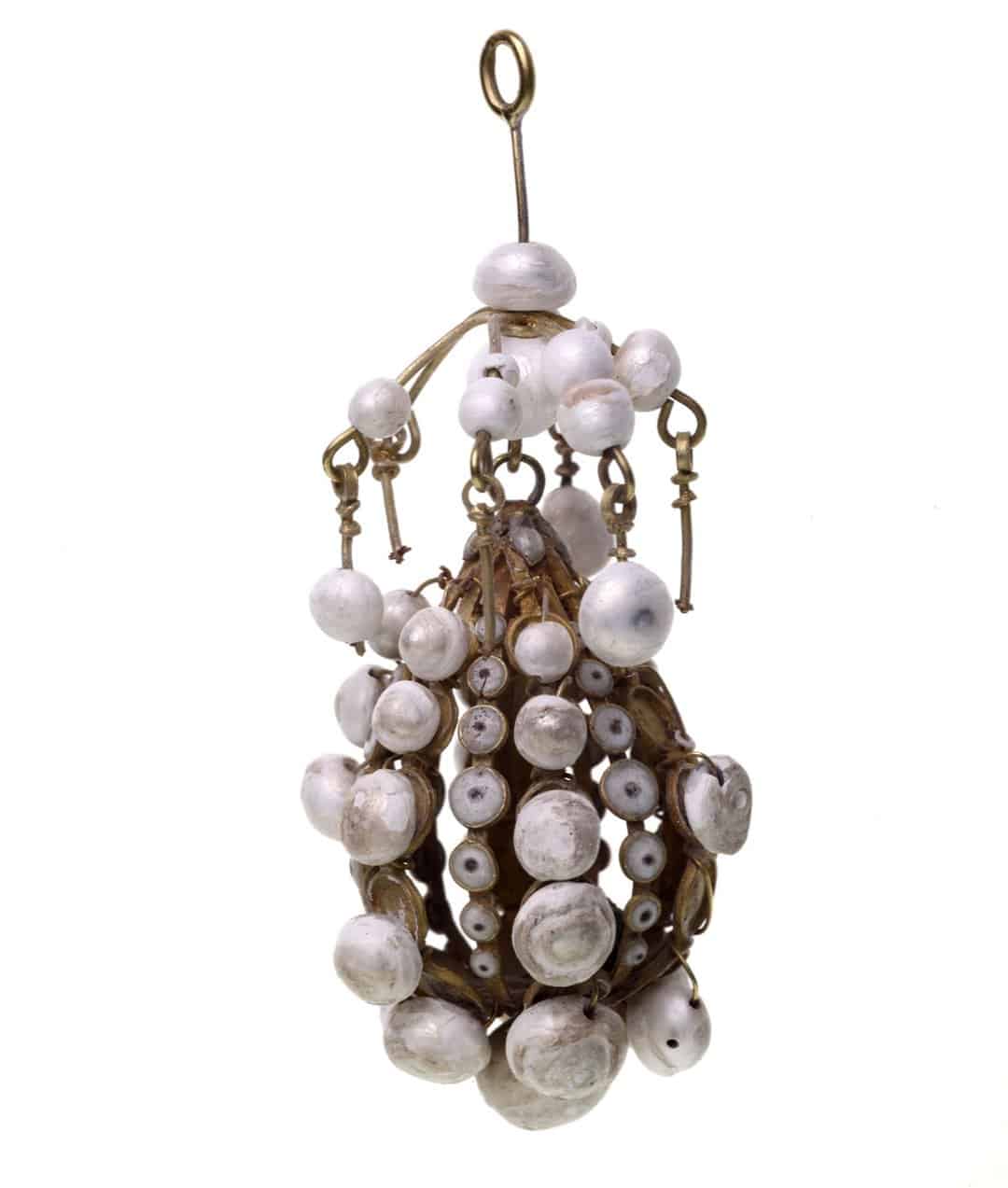 A gold and pearl pendant cage. © Museum of London.

The hoard has a number of pearl pendants, that were probably worn as earrings or hair pendants. Sadly, the pearls in many have disintegrated – the conservators estimate some 1356 pearls have perished.

Our appreciation of the pearl pendants hanging in a glass case is greatly enhanced by the computer generated presentation of the making of these pendants (only a few seconds over a minute long) and a display showing where the pearls would have come from and how thy were graded by Elizabethan jewellers. 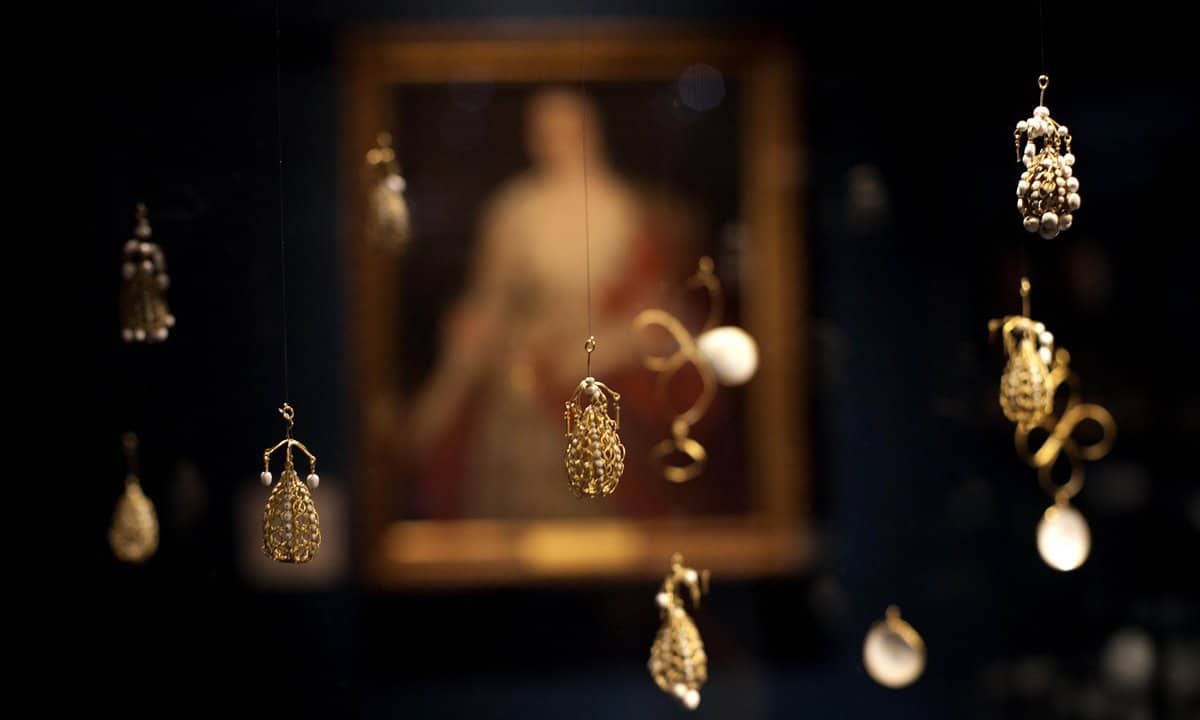 A few ‘pearl cage pendants’ hang in a display case. © Museum of London

Jewellery in the 16th and early 17th Century London

As exquisite as these objects are, this is not only an exhibition of fine jewellery beautifully displayed.

The exhibition is in a gallery in the lower levels of the museum. Entering the exhibition is what I imagine entering bank vaults must be like. I am not sure if it was just an effect or the entrance really had to be made that secure (quite understandably), but as you pass through the high security turn-styles you immediately realise you are entering something special and valuable. 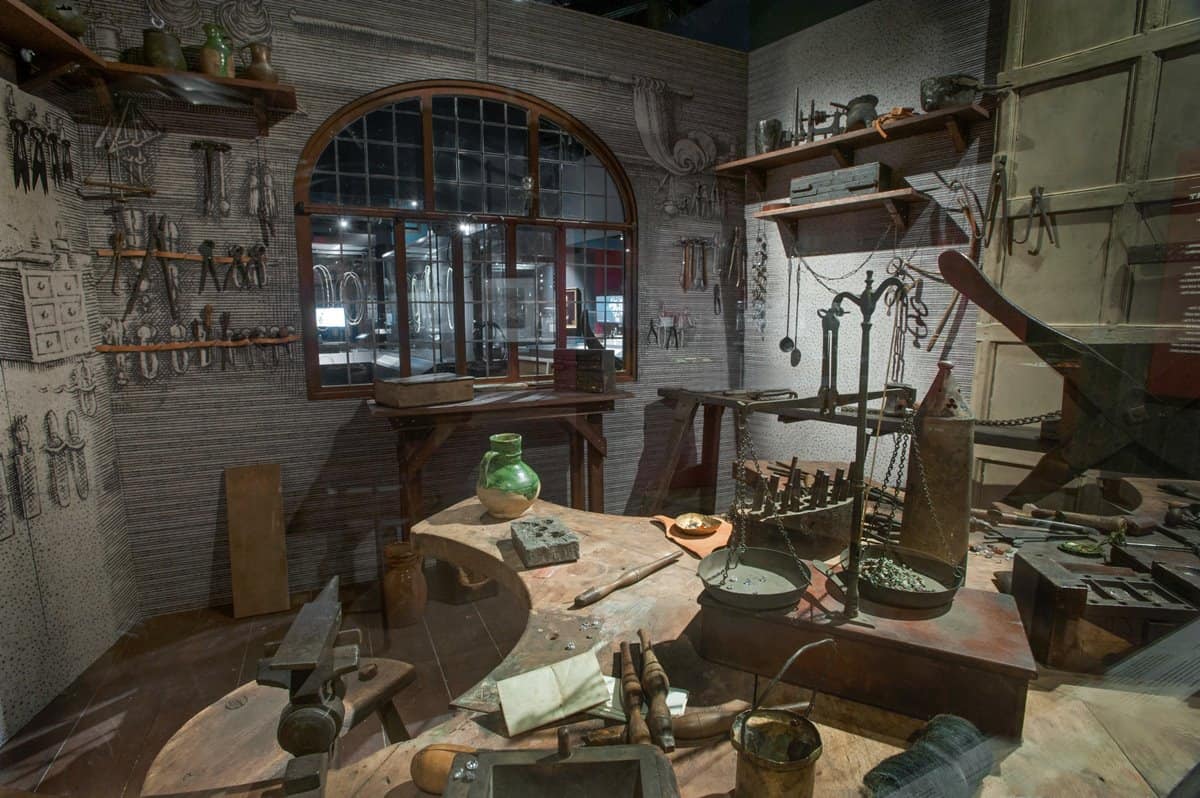 A few ‘pearl cage pendants’ hang in a display case. © Museum of London

Before getting to the precious stuff, visitors pass through a few display areas that do well in setting the scene of jewellery in Elizabethan England. From the trade in exotic materials to the reconstruction of a jeweller’s workshop. These displays provide an excellent introduction to the Cheapside Hoard itself. 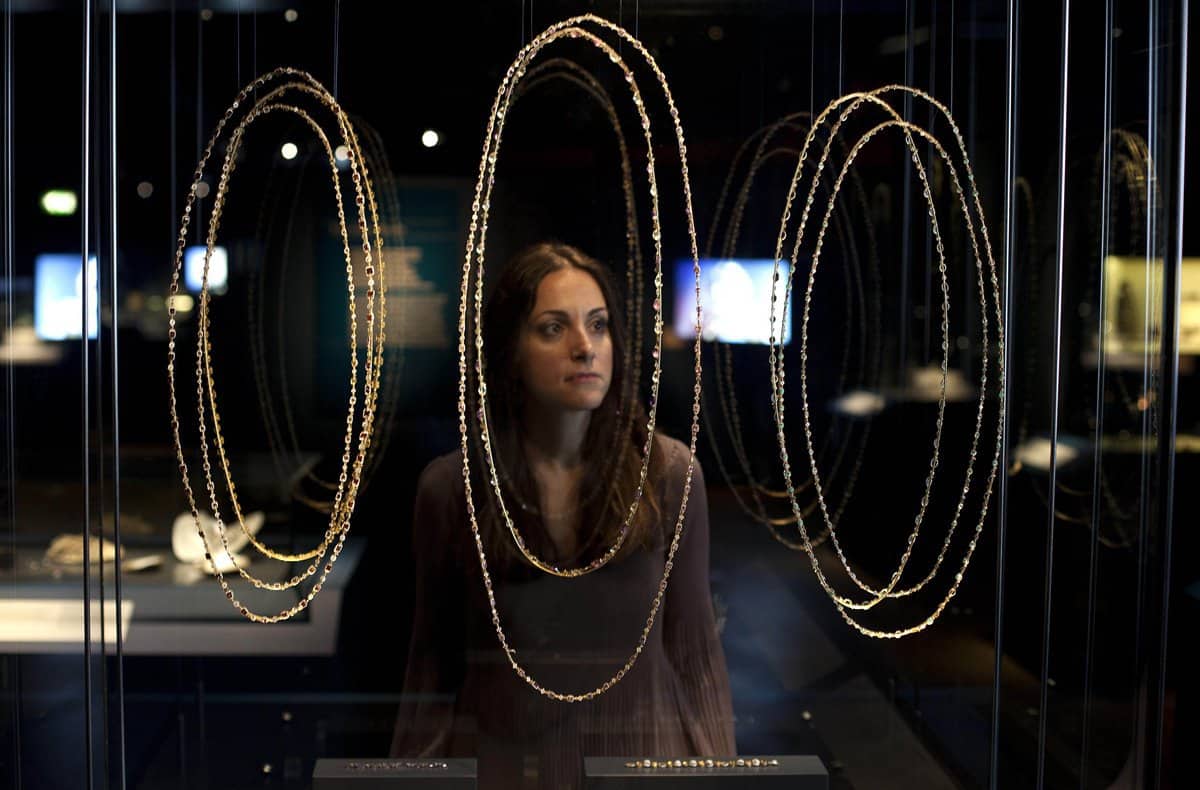 Wonderful displays of bejewelled necklaces and chains. © Museum of London

Where the introductory display spaces are well lit, the principal gallery is darker with effectively well lit cases displaying the jewellery in all its glory. As mentioned above, alongside the display cases are holders in which large magnifying glasses can be found. Grab one and take a closer look at the necklaces, to see the incredible detail of the enamelled foliate and floral links that make up the necklaces. 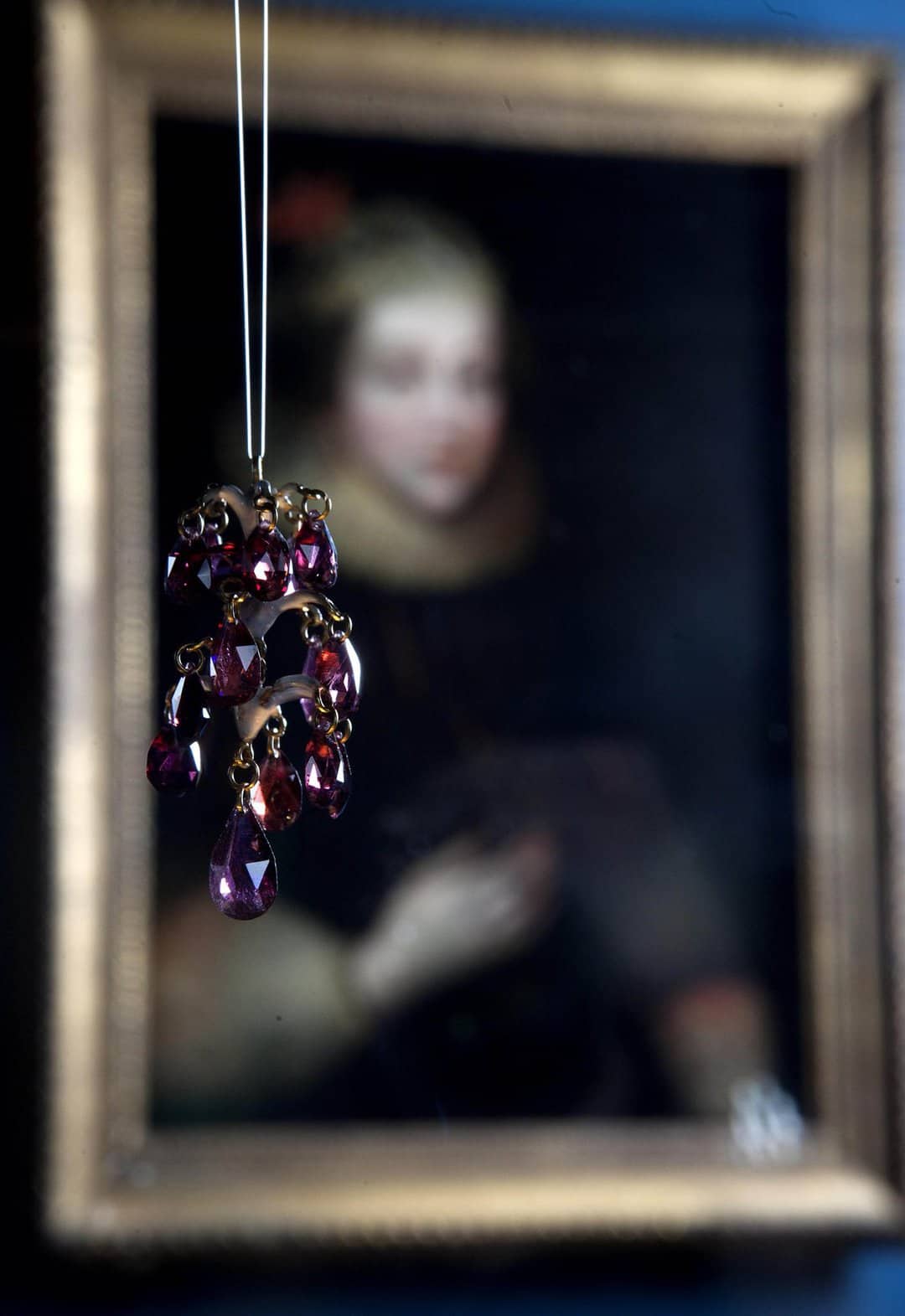 A garnet pendant hanging in front of a portrait of Elizabeth Wriothesley, Countess of Southampton. © Museum of London

Hung on the walls of the gallery are contemporary portraits that provide a wonderful visual record of how some of the jewels on display were worn. In the portrait from Elizabeth Wriothesley, on loan from the National Portrait Gallery, the Countess is wearing ruby or garnet earrings, just like those found in the hoard.

Amongst the many display cases of the hoard are display cases that provide further information about various aspects of the jeweller trade or traditions and fashions of Elizabethan England, such as the trade in gems or clothing of the time. These do much to bring the wonderful pieces to life. 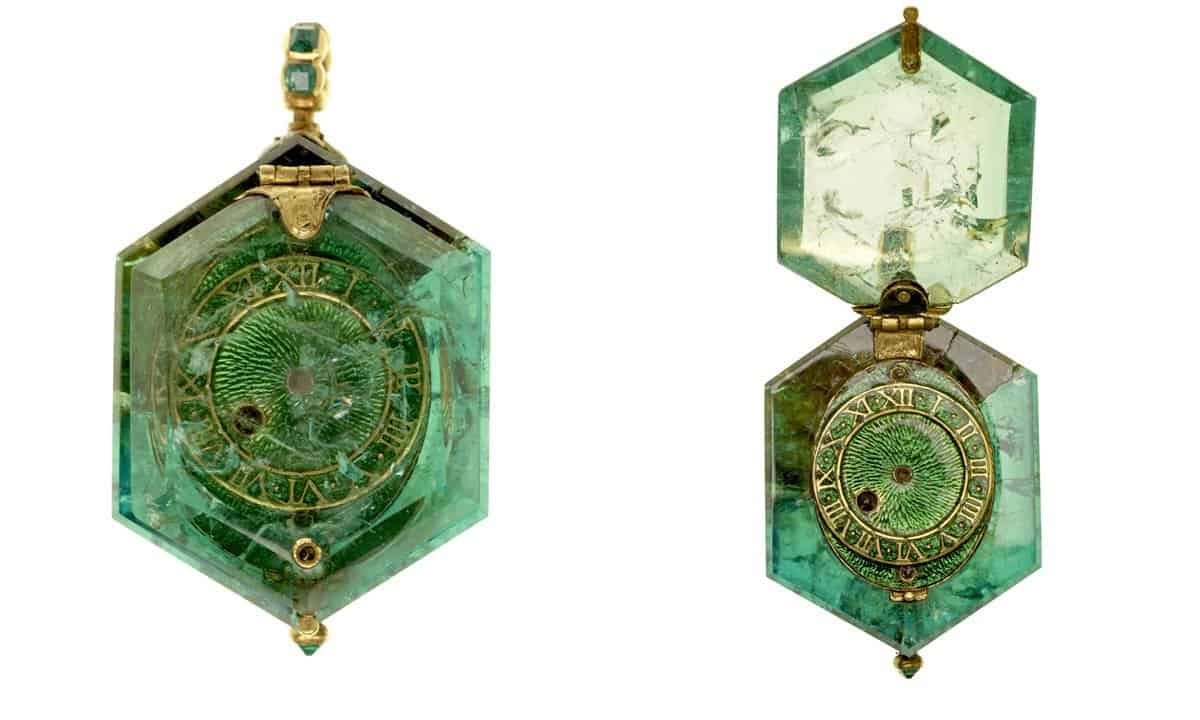 Watch set in a Columbian emerald crystal. © Museum of London

What struck me the most about seeing the hoard as it is distributed around the many display cases was the variety of objects it included. With close to 500 individual pieces I suppose you do expect some variety, but the diversity of artefacts far exceeded my expectations.

The hoard has a few timepieces, but the clock set in a Colombian emerald crystal really is something unique. According to scholars there is nothing from the time (circa 1600) to rival this piece. Contrast the green, Elizabethan timepiece with the amethyst cameo of Byzantine age, and you start to get some idea of the astounding array of objects in the Cheapside Hoard. 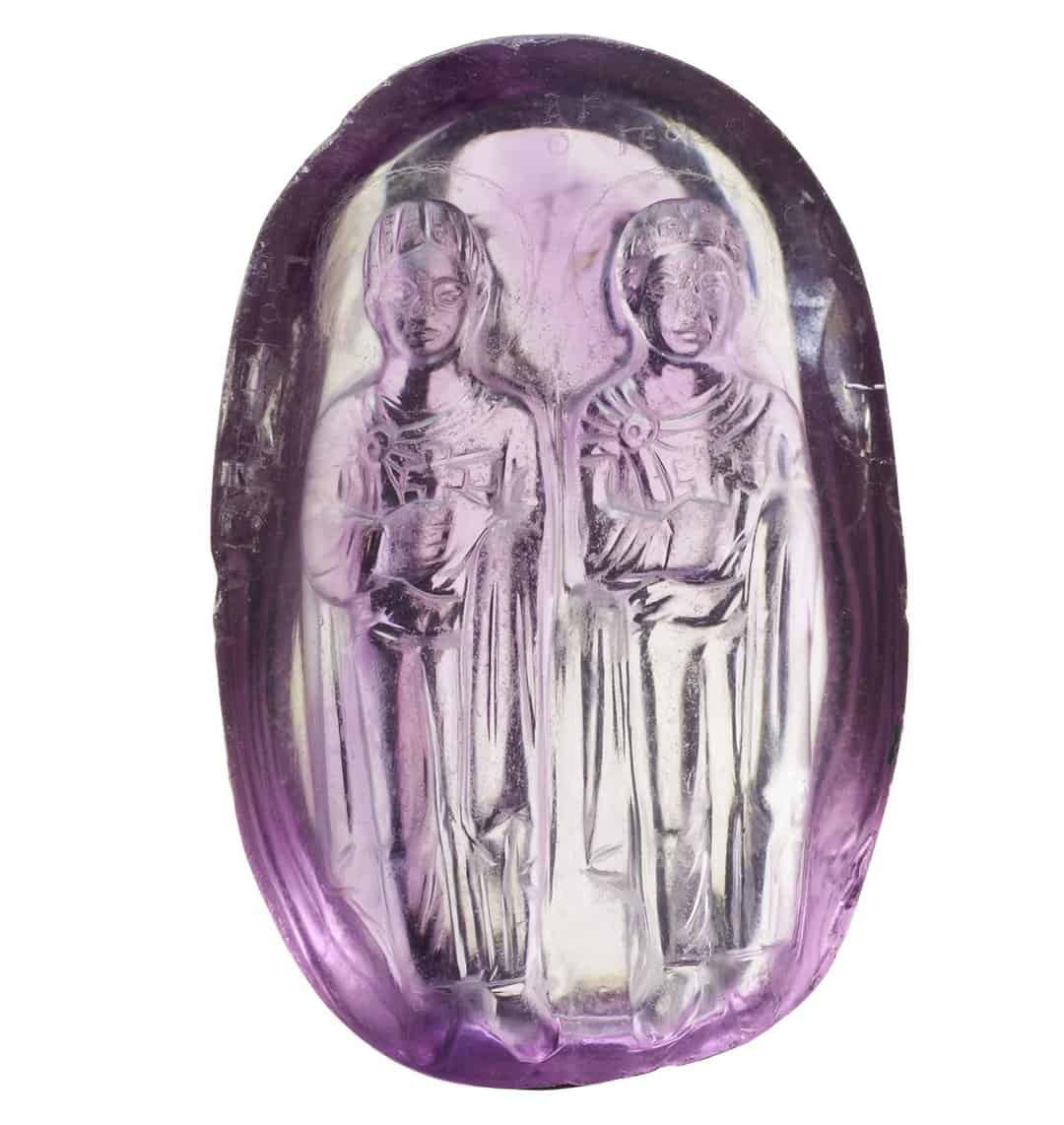 As with all archaeological collections, there are questions we simply just do not know the answers to. Of course it would be interesting to know exactly when the Cheapside Hoard was buried, by whom and why. And certainly why they never returned to retrieve it. But it seems we may never know the answers to these questions.

The exhibition is a testimony to what we do know about the hoard, the research it has engendered – revealing a lot about craftsmanship and wealth in 16th and early 17th century London – as well as the technical display skills of the staff of the Museum of London. If I lived in London, this is an exhibition I would definitely re-visit.

Visiting London? If you are planning a trip to London, check our London Travel Guide for History Lovers.