Iona Abbey and Nunnery on the Isle of Iona, Scotland

Words like ‘magical’ and ‘mystical’ are seriously overused – but they apply in no small measure to the island of Iona, famous for its Abbey and as a place of spiritual retreat. Kate was fortunate to visit during a sailing tour of the West coast of Scotland and discovered that the atmosphere of the island doesn’t ever quite leave you, even long after you have left its shores behind. 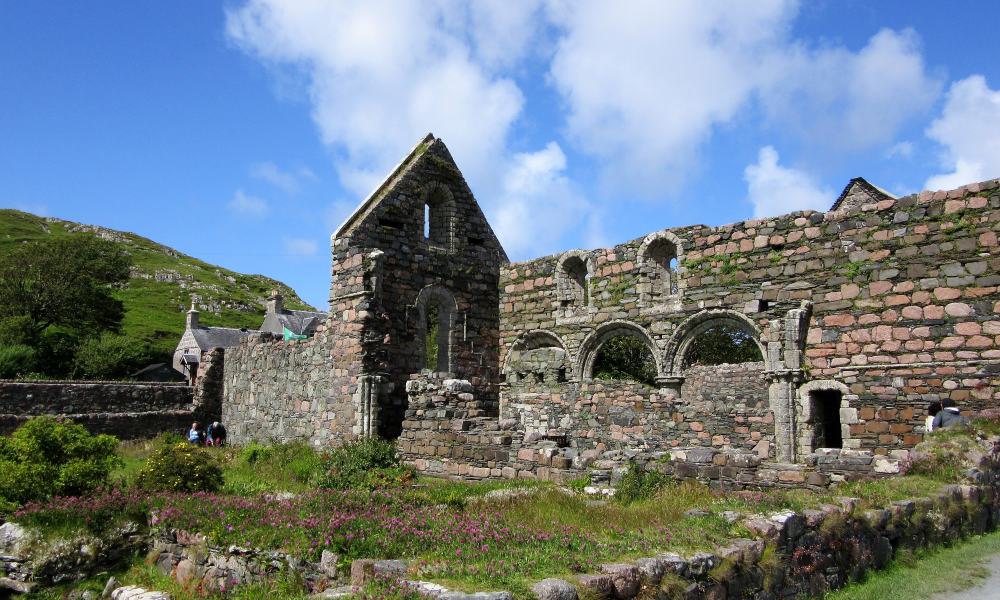 Iona is tiny – 1.5 x 3 miles – and the only way to arrive is by ferry from Fionnphort on the Isle of Mull. The population is about 120 permanent residents, augmented in summer months by casual tourists, but also by many seeking peace and spiritual restoration in their personal lives. Iona has been a destination for pilgrims for over 11 centuries, a place of worship at the shrine and home of St Columba.

Christianity in the United Kingdom began here, as Columba arrived on Iona in 563 AD, 34 years before Pope Gregory in Rome sent Augustine to Canterbury on his mission to convert the Angles. Columba was an Irish priest and monk, founding a number of monastic houses in Ireland before a tribal feud forced him to into exile across the sea. Standing on the west coast of the island at St Columba’s Bay and looking out, it is possible to imagine him arriving with 12 companions in a wicker coracle, ready to bring the Word of God to pagan peoples. 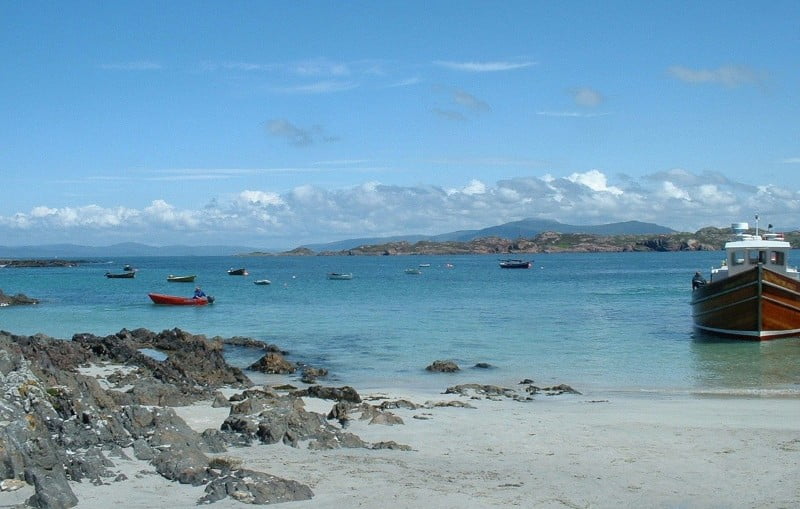 Iona has sandy beaches and blue seas and it is easy to see why it was such an appealing place to settle.

The monks built a wooden and wattle settlement on Iona as their first monastery, and large parts of the original boundary earth wall and ditch are still visible. Quickly recognised as a devout and holy man, for the next 34 years he and his monks were active missionaries through the Western Isles and up to the north-east of Scotland, establishing what came to be known as Celtic Christianity. Columba made his monastery the centre of contemplation of God and of learning – himself writing hymns and poetry, and reading and copying holy texts.

In 2017, using radiocarbon dating of samples of burned wood, archaeologists were able to identify the remains of Columba’s cell, or scriptorium, on Torr an Aba, where he worked and prayed. It is known that Columba died on Iona and was buried by his monks in the abbey. 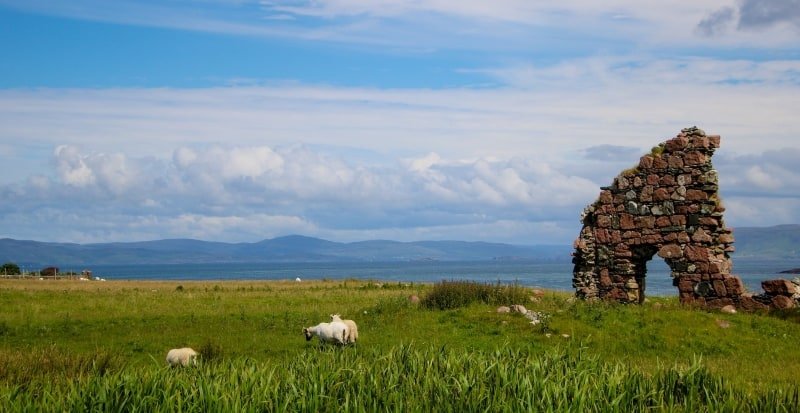 A 7th century abbot called Adomnan wrote a biography of Columba and also a spiritual guidebook detailing the layout of the sites of the Holy Land, and it is possible that this was replicated on Iona with a “via dolorosa” route ending with three high crosses representing Calvary. Amazingly, still to be seen are four of the island’s high crosses – possibly the first designs to contain the ring around the intersection that became characteristic of the “Celtic cross”. St Martin’s Cross is 14 feet tall and stands in its original spot in front of the abbey. 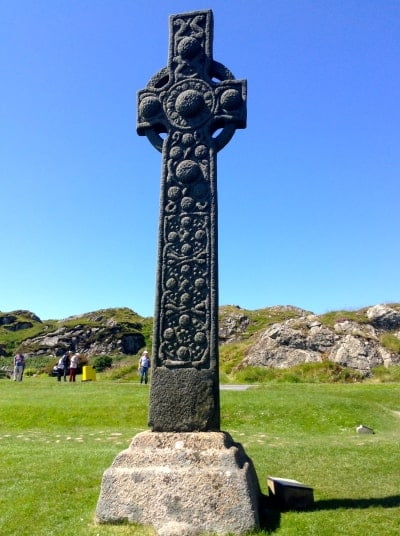 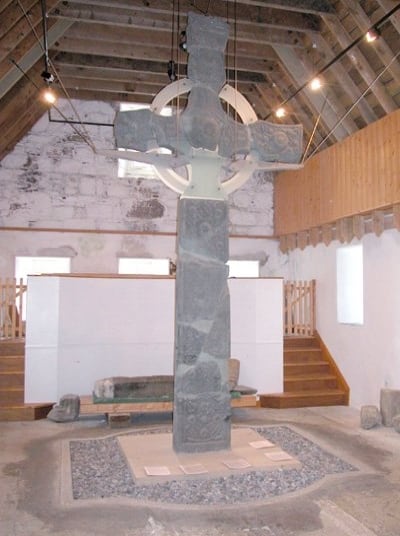 In 802 the settlement on Iona was destroyed by a Viking raid. Forty years later, Columba’s remains were divided between Scotland and Ireland, and the monks returned to the safer shores of Ireland taking with them the Book of Kells, which is now displayed at Trinity College, Dublin. St Columba’s shrine, now a small stone chapel in front of the abbey, is thought to date from the 9th century. It is this shrine that became the focus of pilgrimage and Iona, despite its remote location, became the centre of a Gaelic golden age, producing illustrated manuscripts and the carved stone crosses. 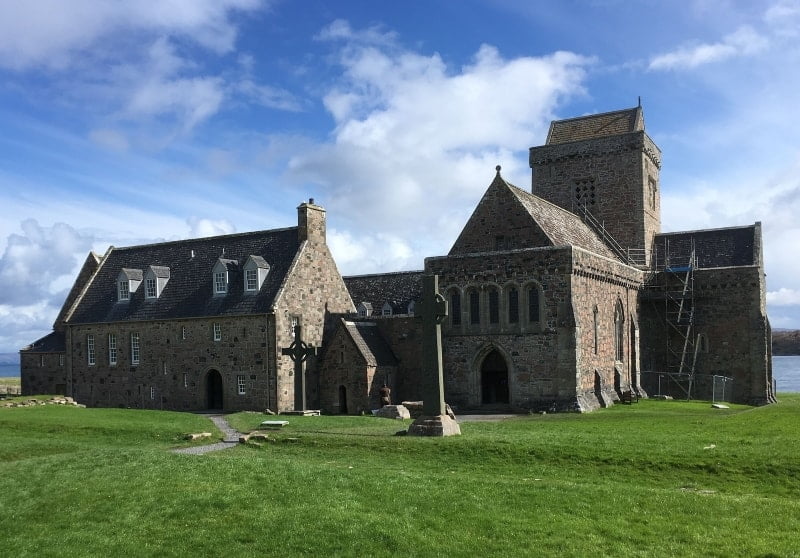 St. Martin’s Cross stands in its original location in front of the Abbey.

A Benedictine Abbey was established in approximately 1203 and a convent for Augustinian nuns was established in about 1208. The convent stands on the main route from the ferry’s landing place along the route to Columba’s shrine and the abbey. This route is similar to the Sràid nam Marbh (‘Street of the Dead’) taken by pilgrims of old so there is an immediate sense of following in the footsteps of the devout from earlier centuries as you follow the grassy paths.

The ruins of the 13th century convent church remain; it is one of the best preserved medieval nunneries in Britain. The church stands on the north aisle of a cloister and has an aisled nave, a chancel and north chapel. Some of the pink granite walls still show the finely carved arcade capitals. Many noble women of Argyll were buried here, and you can just make out a worn grave slab to Prioress Anna MacLean who died in 1543. The cloister garden gives a sense of quiet and contemplation. 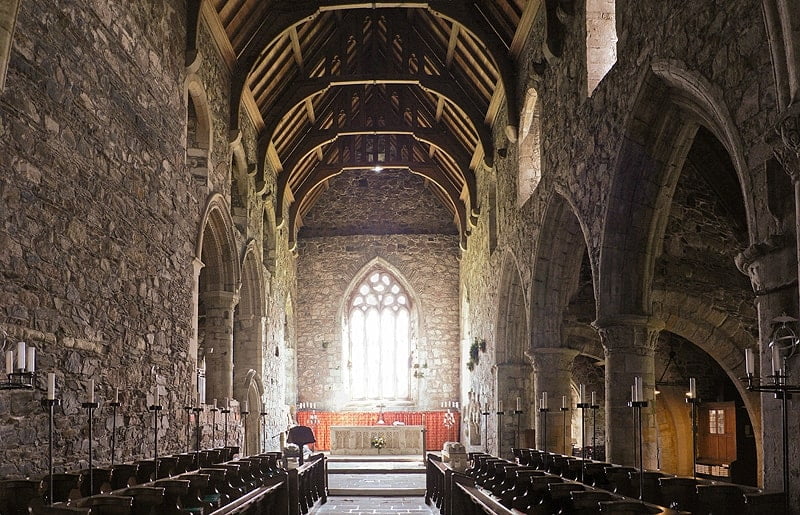 The 12th century abbey church stands where Columba’s monastery once stood. Known as St Mary’s cathedral, it is of the Romanesque style. Today the abbey is the home of the Iona Community, an ecumenical Christian community of men and women from all different Christian traditions founded in 1938. It runs 3 residential centres on Iona and Mull.

Nearby is St Oran’s Chapel, with a surrounding graveyard known as Relig Odhráin. For centuries the graveyard became the traditional burial ground for the kings of Scotland making it an important historical and cultural landmark on the island. Kenneth MacAlpin and Macbeth are believed to be buried here. 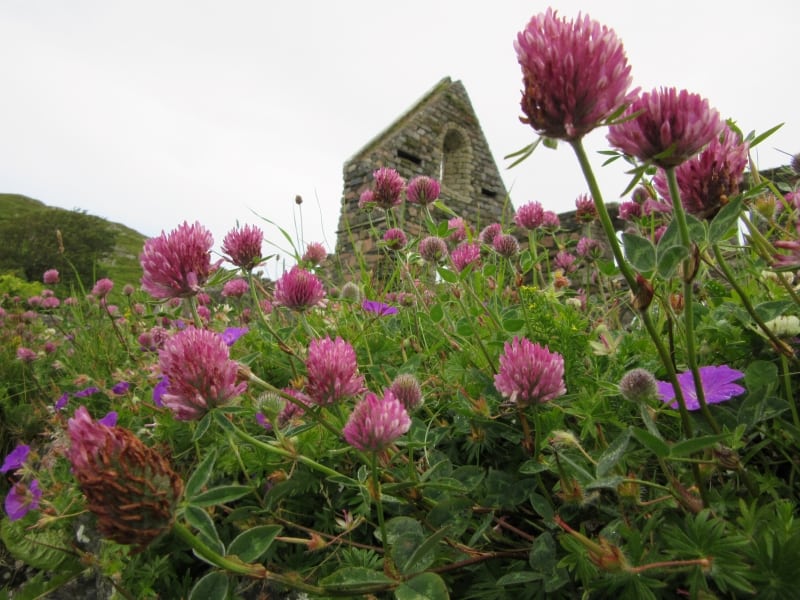 Visitors and pilgrims alike tend to focus their concentration on the main religious buildings, but the island itself is well worth exploration. You can walk across The Hill of the Angels to St Columba’s Bay and continue onwards to some of the most beautiful and unspoilt beaches in Scotland. You can find a marble quarry with some on the machinery still intact. You may even see a golden eagle. Those lucky enough to be at sea can travel north to visit the basalt rocks of Fingal’s Cave on the island of Staffa, and perhaps enjoy the spectacle of dolphins leaping around the boat.

The experience of visiting Iona is subtly different from that of any other island, even in the Western Isles where glorious islands abound. It seems to exude a sense of spirituality and mysticism even to those of no Christian faith. The feet of so many devout believers have trodden these sacred paths that you cannot help but be drawn into the atmosphere of holiness, calm and peace. Take a journey to it if you can.

Travel by ferry from Oban to Craignure or from Kilchoan to Tobermory, then drive or take a bus across Mull to Fionnphort for the 4 minute passenger ferry across to Iona.

Opening times are subject to ferry services and weather conditions.