One of the main attractions in Parque del Oeste in the city of Madrid is an ancient Egyptian temple. Built in the 2nd Century BC, the temple was given to Spain in 1968 by the Egyptian government for Spain’s help in relocating the Abu Simbel temple before the construction of the Aswan dam. Temple of Debod is one of the few substantial examples of ancient Egyptian architecture rebuilt outside of Egypt, and the only one in Spain. As Thomas shows, not only is this an interesting ‘object’ with a fascinating history, the current setting offers great opportunities for photographers in Madrid. 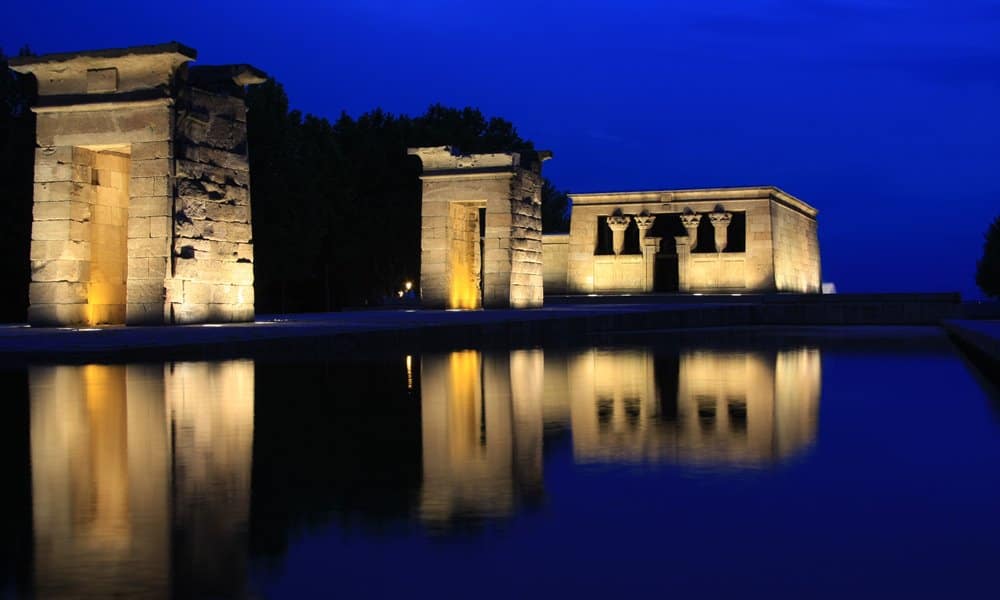 The temple was re-constructed at the centre of a water feature in the Parque del Oeste.

A city centre park in the Spanish capital might seem an unlikely location for an ancient Egyptian temple. But there it is: the Temple of Debod from Lower Nubia in an evocative setting in Madrid’s Parque del Oeste. The park itself has a lot of history, as it witnessed some of the opening battles of the Civil War as Republicans and rebels fought over Madrid.

Interestingly, the Temple of Debod was originally in an area that witnessed civil rebellions. The Kushite king of Meroë Adikhalamani took advantage of uprisings in southern Egypt against Ptolemy IV and extended his control from Lower Nubia northwards into the present-day Aswan area. Here he either modified existing temples (eg on the island of Philae) and ordered the construction of new chapels and temples. The first structures of Debod, essentially a chapel, were built by Adikhalamani.

Over the centuries that followed the temple was expanded and modified by several Ptolemaic rulers, and again by Roman emperors during the period of Rome’s annexation of Egypt.

Now the temple stands as a gesture of appreciation to the Spanish people for the assistance they provided in saving ancient structures from flooding from the construction of the Aswan Dam. About 22 structures, including the temples of Abu Simbel and Philae, were relocated to the shores of the dam or the gardens of the Sudan National Museum of Khartoum, while others were given to nations who helped in these operations. So just as Spain has the Temple of Debod, so the Metropolitan Museum of Art of New York has Temple of Dendur, the Rijksmuseum van Oudheden of Leiden has the Temple of Taffeh and the Museo Egizio of Turin has the Temple of Ellesyia. 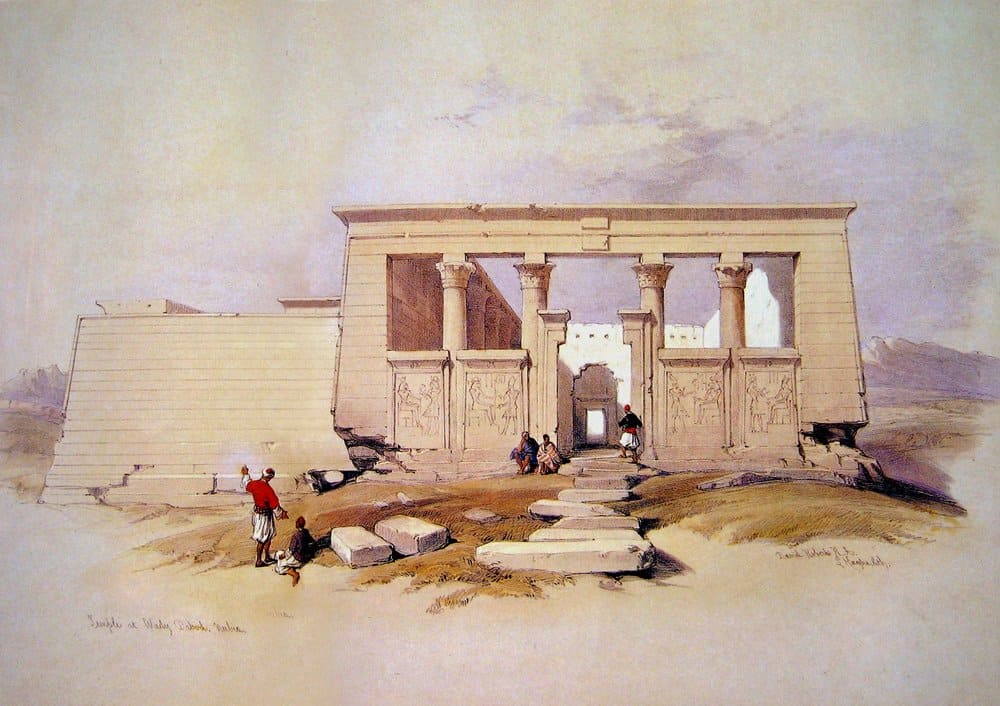 A painting by the Scottish Orientalist artist David Roberts made in 1839.

Timeline: A brief History of the Temple of Debod

2nd century BC Adikhalamani (Tabriqo), the Kushite king of Meroë, started construction of what would become the Temple of Debod with a small single roomed chapel that was dedicated to the god Amun.

Ptolemaic Dynasty During the reigns of Ptolemy VI, Ptolemy VIII, and Ptolemy XII the temple was extended in all directions to create a small temple.

Roman Period During the reign of Emperor Augustus further expansions of the architecture, including two pylons and a processional way from the riverside quay, also scenes depicting the Emperor were added to the main façade.

635 AD The Temple of Philae was closed to Pagan worship, and other small temples in Lower Nubia, including Temp of Debod, were abandoned.

27 December 1737 Frederik Norden, a Danish Captain, was sent to explore the Nile for the Danish navy. His ship passed in front of Temple of Debod, from which he took notes – thought to be the first written account of the temple by a western explorer.

1 February 1829 Jean François Champollion and Ippolito Rosellini, on an expedition sponsored by France and the Grand Duchy of Tuscany, visit the temple.

1968 The Egyptian government gifts the temple to Spain for their support in saving the Abu Simbel Temples from the rising waters of the Aswan Dam.

1970 The crated remains of the temple arrive in Madrid and re-construction begins.

1972 Re-construction complete, the Temple of Debod in Madrid’s Parque del Oeste is opened to the public. 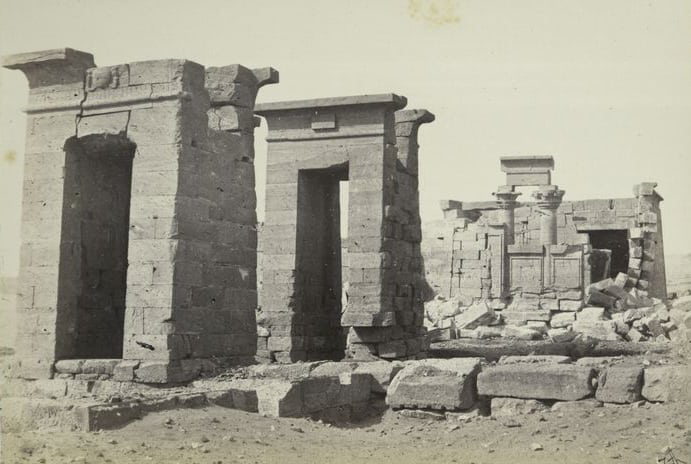 A photograph taken by English photographer Francis Frith, thought to be about 1862, that clearly shows the collapse of the front façade and the pylon closest to the temple. Looking at the state of preservation on each cornice of the two pylons, what is clear from this historic photograph is that the pylons were re-erected in the wrong order in Madrid.

A Great Photographic Opportunity in Madrid

Today the Temple is a part of a water feature in the Parque del Oeste. Although this setting nothing like its original location, it still does allow for some wonderful photographic opportunities. This is particularly true if you like playing with light, reflections and water, as the three following photographs show. 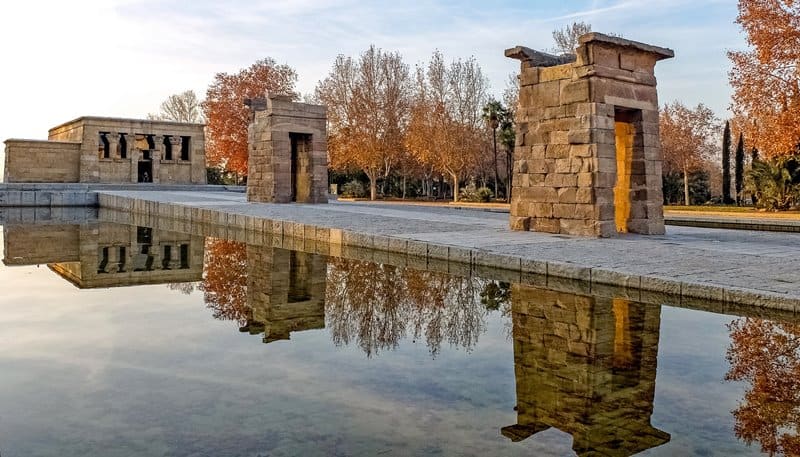 Temple of Debod in autumn. 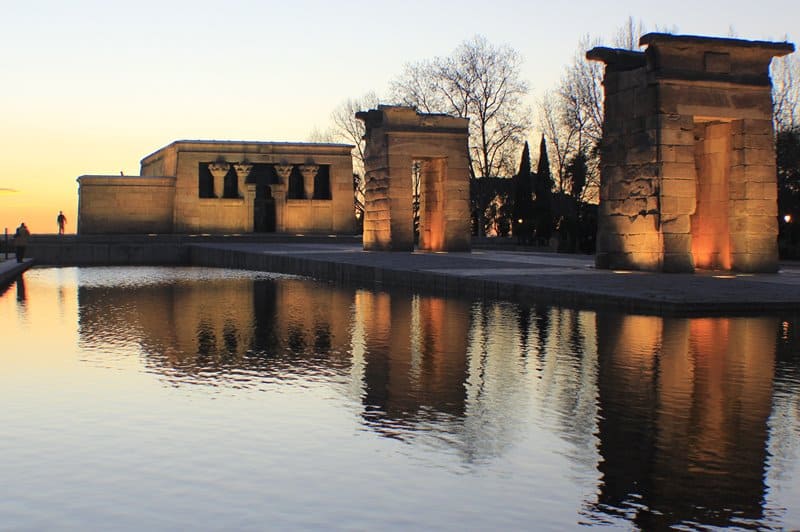 Temple of Debod at sunset. 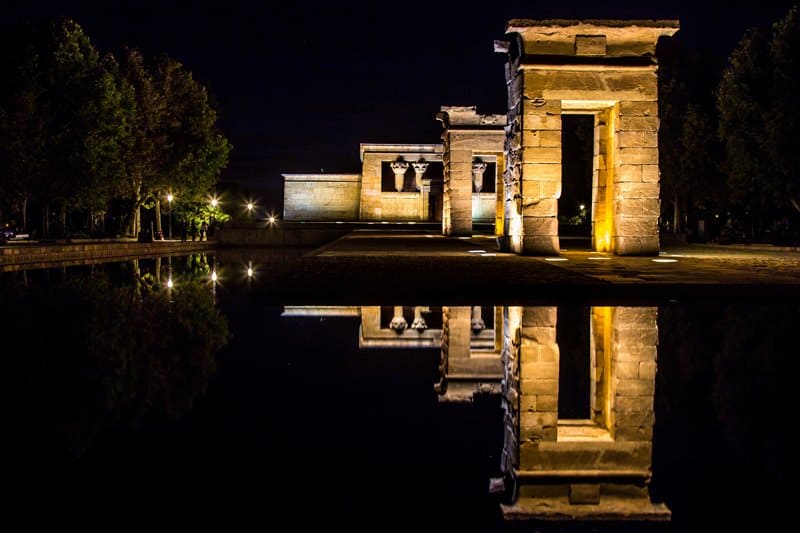 Temple of Debod by night.

Where is the Temple of Debod? Map of Parque del Oeste

Find the relocated Egyptian temple on our Interactive Map of Egyptological Sites of Interest.
For added interest, click on the yellow ‘pegman’ in the lower right corner of the map and drag it on to the map to the light blue lines or dots. The dots will give you 360 photographs take at those locations, where as the lines allow you to move through the park – and get great ‘walking’ views of the temple.

Visiting the Temple of Debod 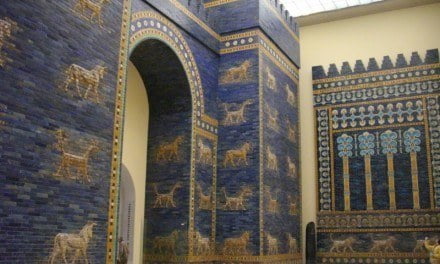 Babylon to Berlin & Beyond: the Ishtar Gate in the Pergamon Museum and Around the World 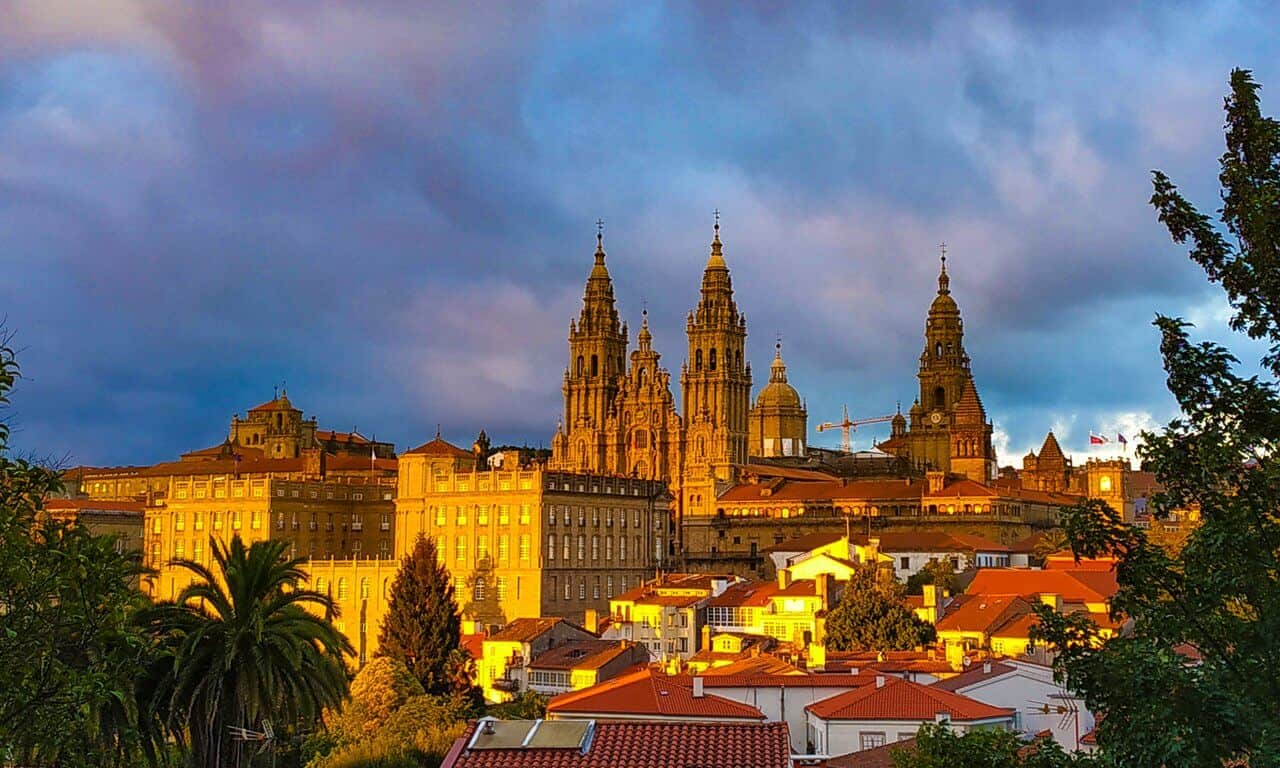 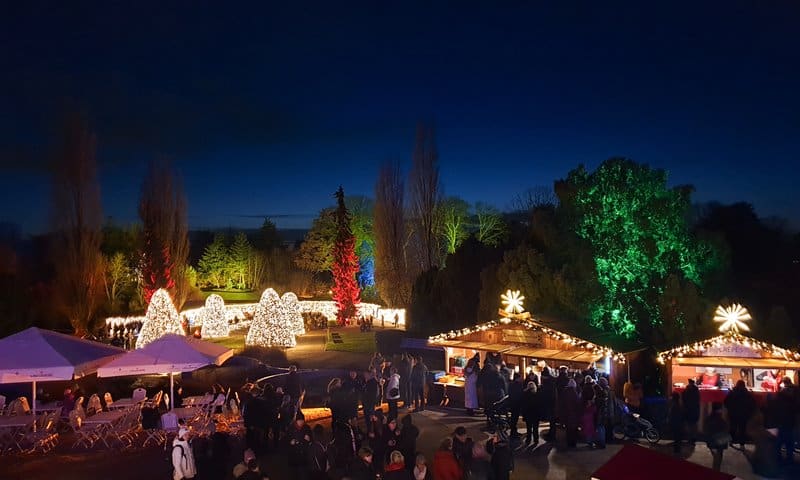 Christmas Garden Berlin 2021: A light Show at the Botanical Gardens 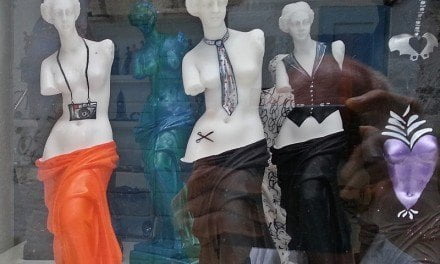 In Search of the Aphrodite of Milos