As elsewhere in Europe, castles are the quintessential symbol of Medieval Portugal. Built for defence, but also for status, they had and still have a deep impact on the psyche of those who come across their imposing appearance. Portugal’s castles shaped not only the the country’s landscape, they also played significant roles in determining the country’s history. From the establishment of the Portuguese Kingdom and throughout the Middle Ages they were key in defending the borders of one of Europe’s oldest countries. 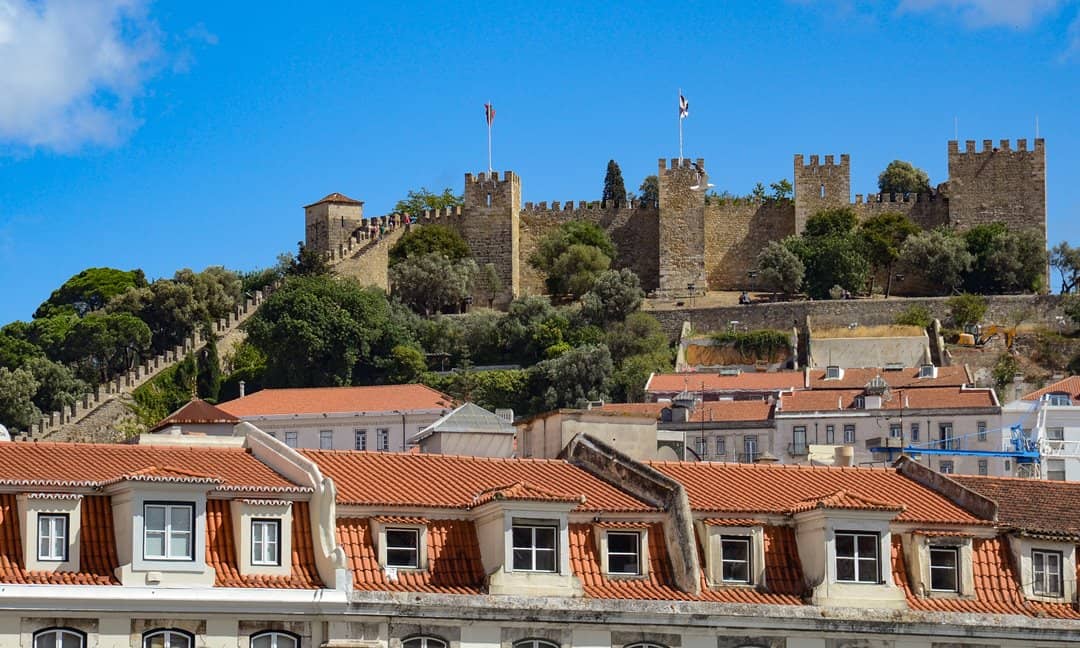 The Moorish towers and walls of São Jorge Castle in the historic centre of Lisbon.

Scattered throughout Portugal, the early castles around the country, their geographical locations served a clear purpose of border defence during the continuous warfare of the Reconquista, first as the border between Christian and Muslim territories, and later, with hostilities against León and Castilla increasing, built in several lines of defence at the border with its neighbouring kingdom. Progressively abandoned since mid-16th century with the arrival of fortifications better prepared for gun artillery, they still saw some fight during the 17th and 18th centuries before serving as storage depots, cattle shelters and even cemeteries.

This constant reuse meant that, at the dawn of the 20th century, most were still in better shape than their European counterparts, especially in England or France. Nevertheless, some of the more ruined ones underwent extensive restoration works during the 1930s and 1940s. Rebuilt according to nationalistic ideals of the right-wing ‘Estado Novo’ regime, those reconstructions were generally fair of their original look, minor small details like misshaped melons or roofing once opened towers in some castles. Still, those reconstructions allowed Portugal to rescue its Medieval heritage and provide both academics and visitors, locals or foreigners, joy at the sight of these historical marvels, true symbols of such a popular Era.

Map of Fortifications, Castles and Palaces in Portugal 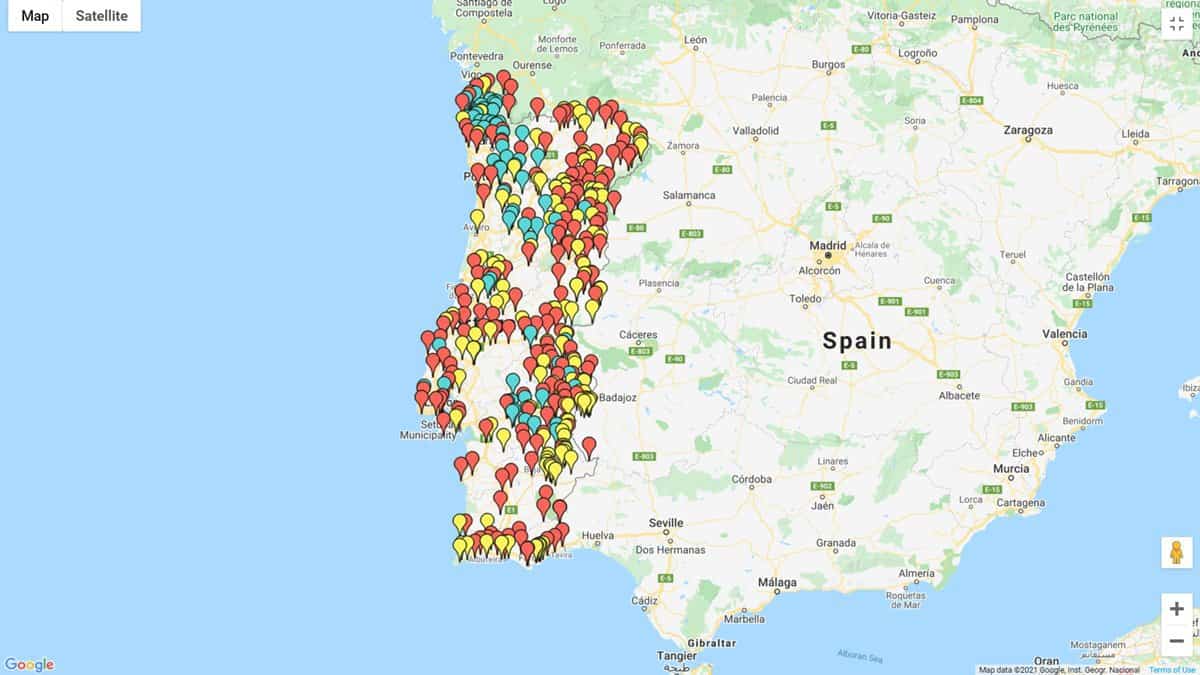 Visiting Castles in Portugal on a Day Trip from Lisbon

Following the arrival of Berber and Arab Muslims in the Iberian Peninsula, the late 8th Century marked the appearance of the first castles and, as some scholars suggest, even Europe. Those were called hisn (plural husun): built as defensive strongholds of the Jund, military territorial divisions or districts of conquered provinces under the early Rashidun and Umayyad Caliphates, in which detachments mobilised for seasonal campaigns were quartered. Such castles were modelled after previous Roman forts in Syria and Levant, making use of the same construction techniques with stone or pebbles in cement.

Starting at the second half of the 9th century and lasting into the 10th and 11th centuries, coinciding with the Cordoba Caliphate and a slow but sustained growth in number of castles, particularly after the year 1000 AD, the hisn evolved closer to the typical design of a Medieval fortress. Surviving husun and castles of the Caliphal period can be found at Sintra, Relíquias, Alferce, Alcoutim, Coina, Cacela, Aljezur, Aljustrel and Messejana.

During the 12th century another castle building period emerged when the Almohads brought many innovations in military architecture and materials, such as the use of taipa (rammed earth) common in North Africa, the concept of ‘elbow entrance door’ and albarrana towers. Some of the best preserved fortresses of this period are Silves, Mértola, Paderne, Juromenha, Loulé, Alcácer do Sal or Alandroal castles. Similarly, many towns and cities still retain examples of Moorish walls that have been preserved, such as the Cerca Velha (old wall) of Lisbon or Évora, still preserving the iconic horseshoe arched gates, as shown in the castles of Elvas and Faro.

Up north, the region more precociously fortified was around the Douro river during the 9th and 10th centuries. In this early period those were small fortifications of local initiative, called castelos roqueiros (castle-rock or penella in Latin), very simple wooden or stone walls, without mortar, built on extremely difficult accessed granitic plateaus. Few of these castles-rocks remain, not only due to the natural frailty of construction, but also to the subsequent reforms they underwent. However despite their scarcity, we can find some traces at Gestaçô, Penha Longa, Pena de Aguiar, Sernancelhe and Baião.

At the beginning of the 10th century and into late 11th century, territories both north and south of Entre-Douro-e-Minho provinces witnessed a fast increase in the number of castles when local feudal lords established areas of control recently captured from the Muslims. These fortresses, built with mortar, regular stone and architecturally more elaborate, are called castelos condais (county castles or castellum in Latin), like those at Trancoso, Lanhoso, Cimo da Vila, Penela and Lousã. Unlike castle-rocks that only defended a specific settlement, these new fortifications were responsible for the defence of extensive territories, the Civitates: tenancies controlled by a Count or the King’s representative, and articulated with other castles from nearby territories.

Many settlements were also built on older castros (castrum in Latin): Iron Age fortified hilltops reoccupied during those troublesome times, like Curalha, Briteiros or Terroso. Also, a common defensive structure shared from beyond the Pyrenees and recently found in northwestern Portugal were the motas (a motte-and-bailey structure, known in Latin as mons or momoa): wooden fortifications on top of natural or man made mounds. Those can be found at Perafita, Lousada, and Eiró. During the next three centuries we witness a boom of castle construction and their evolution from early Medieval, to Romanesque and Gothic.

List of Must See Early Medieval Castles in Portugal >> 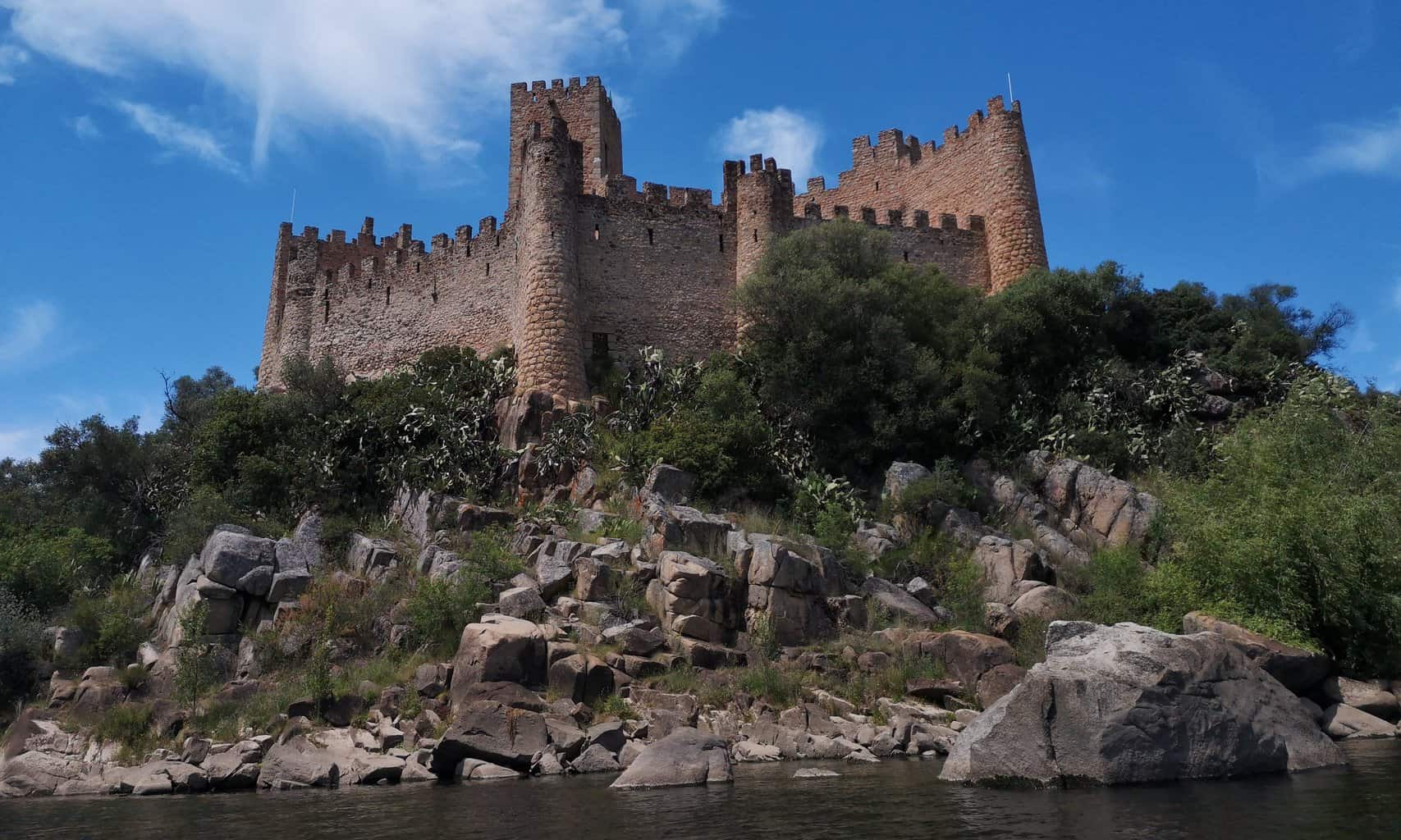 The Castelo de Almourol is situated on a small island in the Tagus River.

After the profusion of fortresses built in the previous centuries, late 11th and early 12th centuries witnessed a substantial reduction in its numbers, due to their increasingly ineffectiveness against new, more modern weapons of attack: siege towers, traction trebuchets and battering rams. The ones built afterwards were bigger, stronger and more complex in their architecture, the era of Romanesque castles had begun. Their evolution made use of a passive-defensive system: relying on wall height and thickness to withstand sieges, keeps or intertwined towers with round-paths to defend continuous stretches of wall. Castles as these can be found at Castro Laboreiro, Belver, Melgaço, Arnóia, Marialva, Vilar Maior or Ourém.

In Portugal, the introduction of Romanesque castles also went hand in hand with the appearance of both local and foreign Military-Religious Orders like the Knights Templar, Hospitallers, Santiago and Avis. Templars brought new building techniques influenced by castle architecture developed in the Holy Land: keep towers, first documented at Tomar (1160), Almourol and Pombal (1171), Penas Róias (1172) and Longroiva (1174); and the “Alambor” (from the arabic: “al-ubur” / “glacis”, in English): a reinforced earth or stone-slanted ramp at the base of a wall to prevent war machines from getting too close to the walls and to stop attackers from digging tunnels under the fortress.

Most of these fortresses can be seen in the regions of Minho, Beira and along the Mondego and Tejo rivers, as the border with Al-Andalus was progressively pushed southwards, Templars would play a key role in it’s defense, especially under the tenure of Gualdim Pais as the Order provincial Master (1157-1195), all of which demonstrate their importance in the development of Portuguese castle building during the second half of the 12th century. 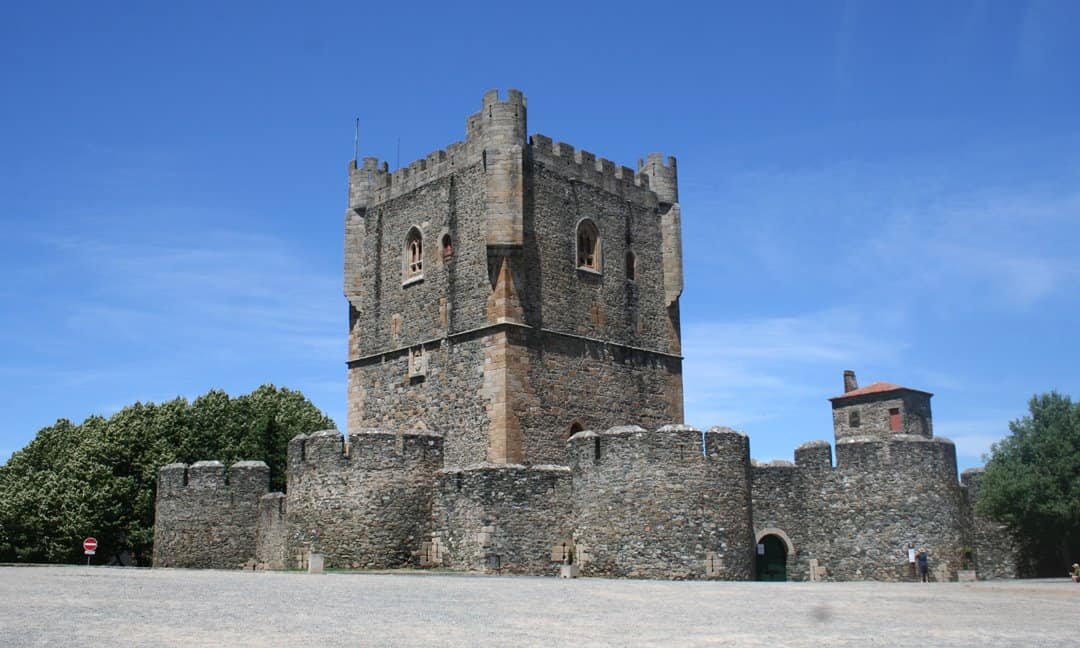 The castle at Bragança with its maineladas Gothic windows.

By the mid-13th century, at the end of the Reconquista, architectural innovations coming from France are incorporated into the design of Portuguese castles. From this period we see the arrival of Gothic features in fortress-building. The previous Romanesque passive-defence role evolved to an active-defencse system, which was translated into higher and ticker walls (to resist the impact of projectiles launched by trebuchets), new plant shapes, machicoulis, murder-holes, barbican walls (barbacãs) and embrasures for gun artillery. The best fortress examples of this period are Guimarães, Bragança, Algoso, Feira, Leiria, Montemor-o-Velho, São Jorge (Lisbon), or Óbidos castles.

But the biggest change was seen in keep towers, with a shift in shape from the classic square or rectangular to polyhedrons: like the pentagonal keeps at Monsaraz or Sabugal; hexagonal at Freixo de Espada à Cinta, or even octagonal at Elvas or Tavira. Another introduction was the repositioning of the keep, abandoning the stronghold centre and moving to its corners, usually close to doors and attached to walls, as in Portel, Olivença or Beja. This feature, together with the increase in height in some cases more than 20 or 30 meters high, allowed to shoot-sight all the fortress
perimeter. It was precisely these features that made them as ideal last stands in case the remaining defences fell, and so, perfect for residential purposes or for weapons, food and treasury storage.

The profusion of Islamic influenced albarrana towers continued during this period, as well as barbican towers, built to enclose and defend strategic places located outside the castle walls, like drinking water sources (fountains, wells), and allow access to river or sea ports, serving as an entry point for supplies and reinforcements, as well as an escape route in case the castle was taken over by the enemy. Last, Gothic fortifications in Portugal would also feature water pits and moats around their walls but most ended up filled due to natural or man made causes.