Not surprisingly, Romano-British Villas have often been compared to English stately homes of the eighteenth-century. Roman country residences, certainly many that were built in the 3rd or 4th centuries, were large, opulent and obviously the homes of wealthy and powerful individuals. The architecture and art in the villas were signs of the social importance of these individuals. Their residences included such features as columns and balustrades and were extravagantly decorated with mosaic floors, wall-paintings and marble statuary. One of the earliest of these palatial villas can be seen just outside of Chichester. Not all the Romano-British villas were this palatial, the vast majority were much smaller homesteads that were more modestly decorated.

For each site listed below there are links to two interactive maps. One a map of archaeology and history sites in England. You will then be able to see what else there is near the Roman Villa you are looking at. The second is a link to a map of Roman sites. So if you are especially looking for other Roman sites, you can see what is around. There is also a link to more information, either to a page on Archaeology Travel or the official website. 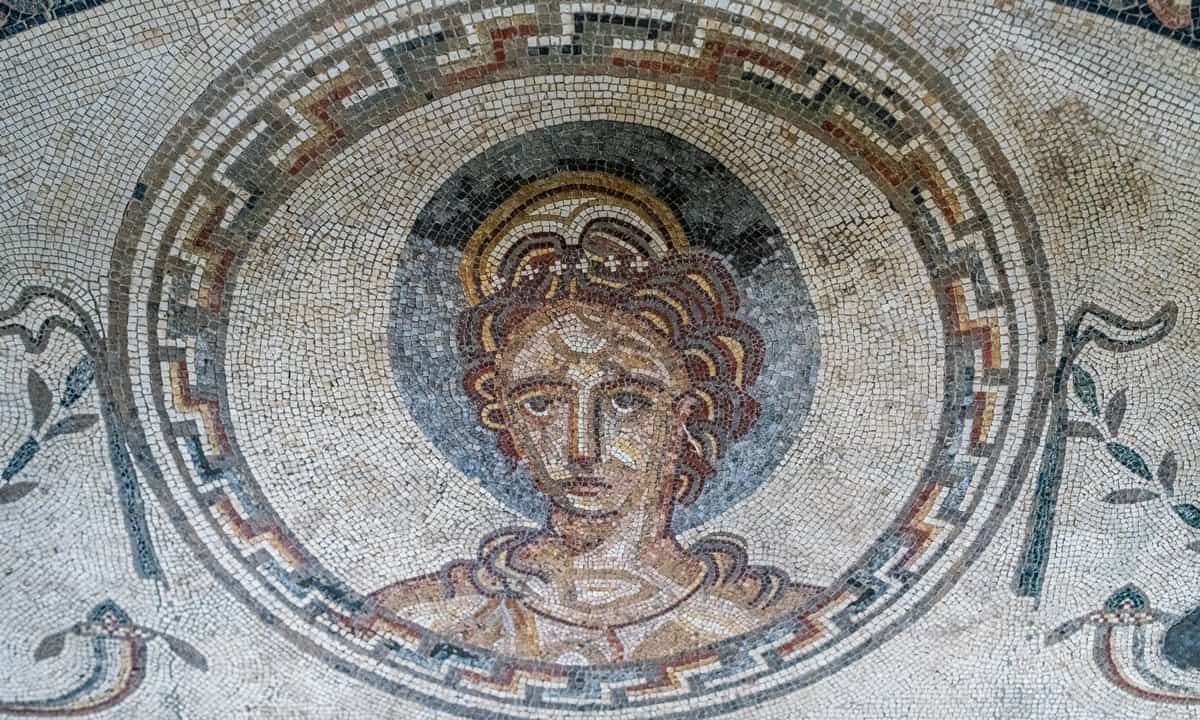 The mosaics at Bignor are some of the best in Britain.

Situated in the heart of the South Downs National Park are the remnants of the Bignor Roman Villa. Amongst the features on display is one of the longest villa corridors in the UK, and only a third of it has been exposed; a dining room with a hypocaust floor; and some of the finest mosaics in England. The walls and mosaic floors of the Villa were discovered over 200 years ago and are still covered by the original Georgian buildings constructed to protect the mosaics; these unique buildings have their own historical significance.
Maps: England | Roman World
Official Website 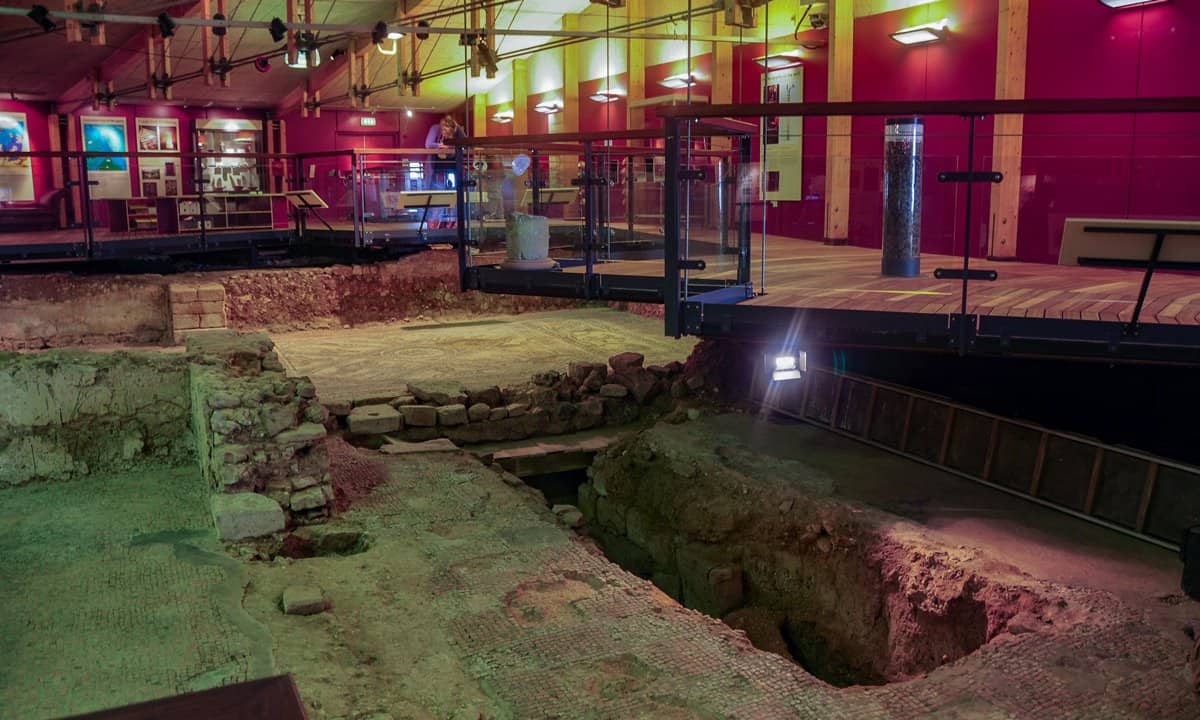 The exposed remains are under cover. Photograph © Nilfanion/Wikimedia

In a designated area of outstanding natural beauty, Brading Roman Villa is one of the finest Romano-British archaeological sites in the UK, with some of the best preserved mosaics in northern Europe. The villa started out as a simple farmstead, but by the time it was destroyed by fire towards the end of the 3rd century it was an impressive villa surrounding three sides of a central courtyard. The main building of the villa is now entirely exposed and under the cover of an ward-wining and ecologically sensitive exhibition and visitor centre.
Maps: England | Roman World
Official Website 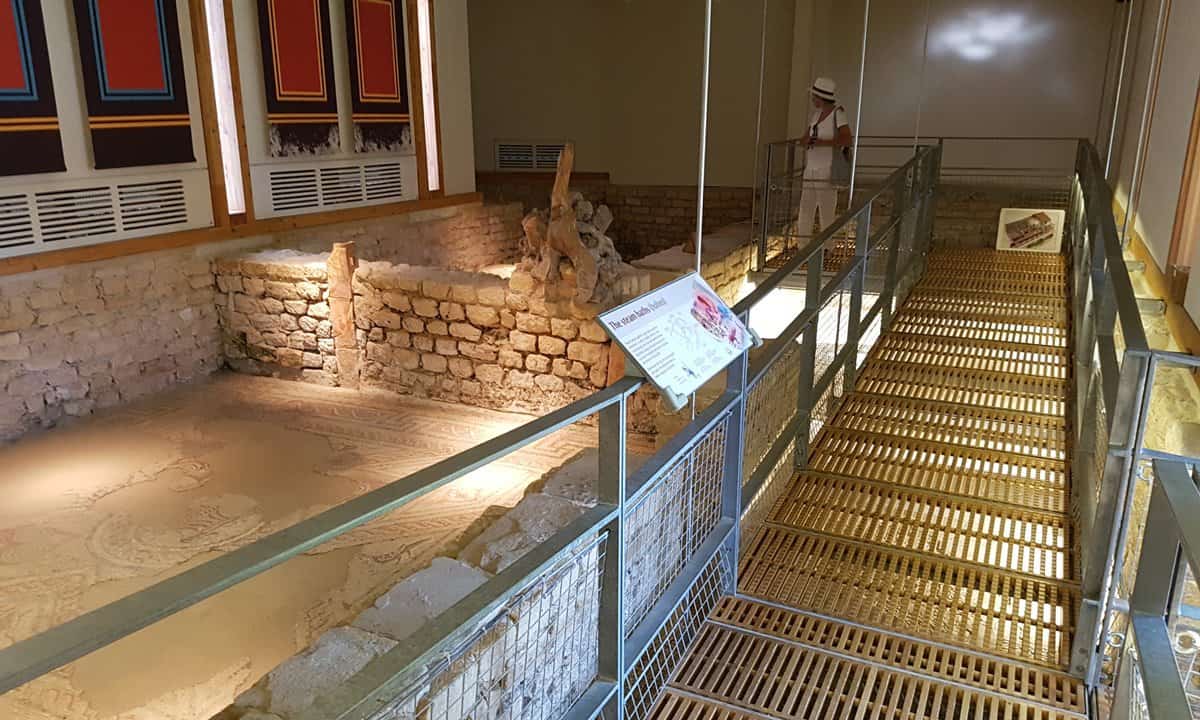 The steam baths in the west range of the villa.

The Roman Villa at Chedworth is thought to be one of the largest of its kind in Britain, and one of the richest in the 4th century AD. During your visit you can see a number of well preserved, features of a typical Roman villa; these include a latrine, bath houses, a dining room that has magnificent mosaic floors, as well as a nymphaeum – a shrine sited at a natural spring. On a wet day you might even encounter some large snails, these are the very descendants of those introduced by the Romans for food.
Maps: England | Roman World
Read More 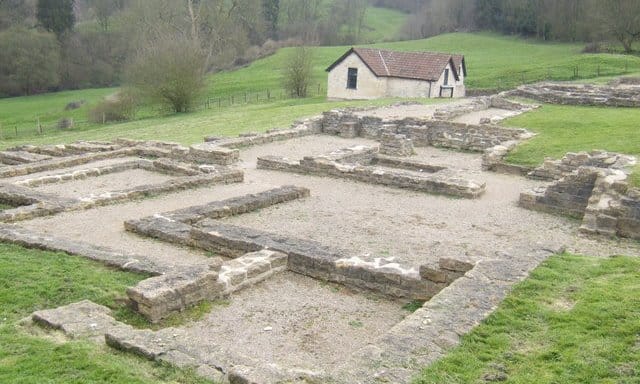 The villa is set of four terraces. Photograph © Jonathan Billinger/Wikimedia

Set on the steep slopes of Birdlip Hill, Great Witcombe Roman Villa is unusual for Roman country residences of this period in that it was built on four terraces, which required the walls to be buttressed to stabilize them. Based on coins found during excavations, it is thought to have been built in the 3rd century AD, and occupied until the 5th. The reconstructed layout of the various rooms that make up the villa is accessible, but due to the villa’s rather remote location, the mosaics are not open to the public.
Maps: England | Roman World
English Heritage Website 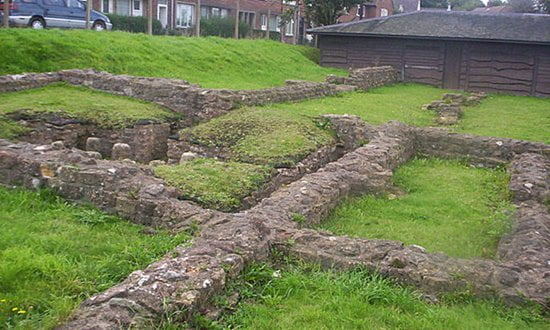 During the building of Lawrence Weston housing estate workers came across the remains of the villa. The eastern section of the site was subsequently excavated by archaeologists, but the other part remains under the adjacent road. Archaeologists exposed a well preserved bath suite complete with hypocaust heating, as well as 3rd century mosaics and traces of painted walls. These can be viewed on site, but the artefacts recovered are housed in the nearby Bristol City Museum and Art Gallery.
Maps: England | Roman World
Official Website 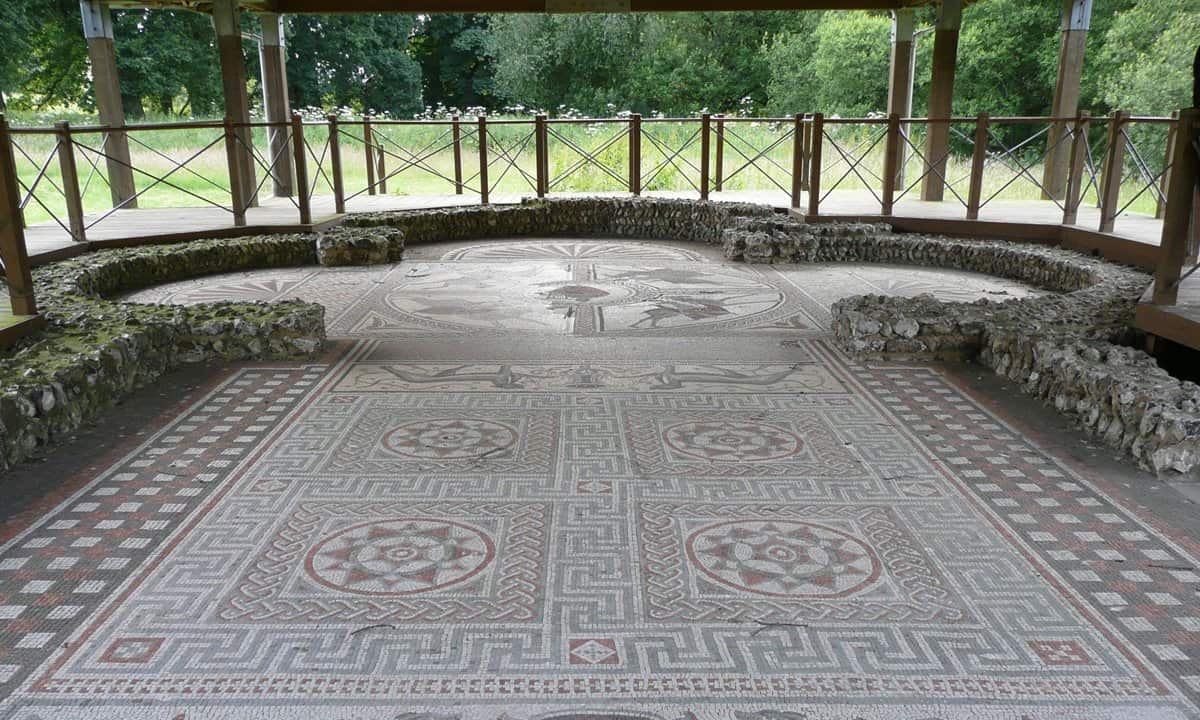 The triconch hall has a mosaic depicting Orpheus.

Over a period of less than four hundred years, what started out as a simple military post guarding a river crossing developed into a villa with agricultural activities, which was then converted into a substantial religious complex that accommodated pilgrims. The villa is best known for its mosaic floor depicting Orpheus, restored in the late 1970s, depicting Orpheus. The mosaic decorates a reception room with three apses, unique in Britain but popular in Italy and north Africa during the 4th century AD.
Maps: England | Roman World 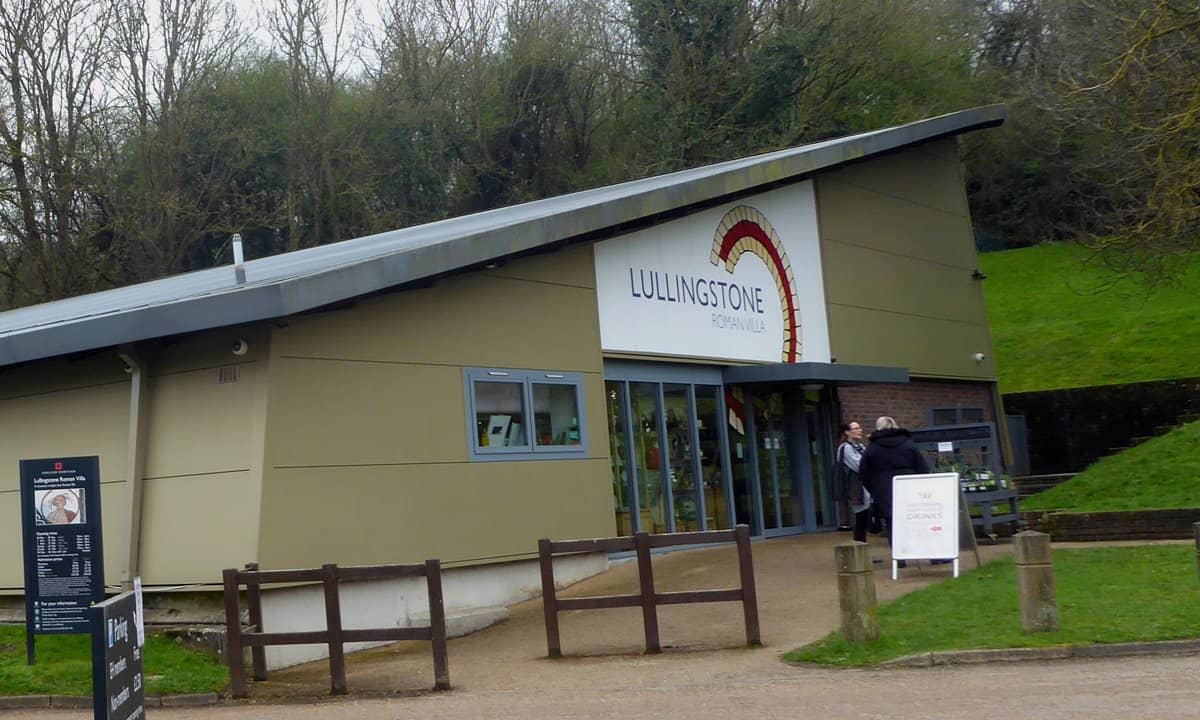 Construction of the Lullingstone villa began around 100 AD, with its most opulent period sometime around the middle of the 4th century AD. On display are the exquisite in situ remains of the mosaic floors as well as prints of more rare examples of wall paintings. One of the earliest Christian shrines in Britain has been found here. As one of the most well preserved of the Roman villas in England, the remains are all under cover, making this a an all-weather attraction close to London. A light show is used to bring the villa back to life.
Maps: England | Roman World
English Heritage Website 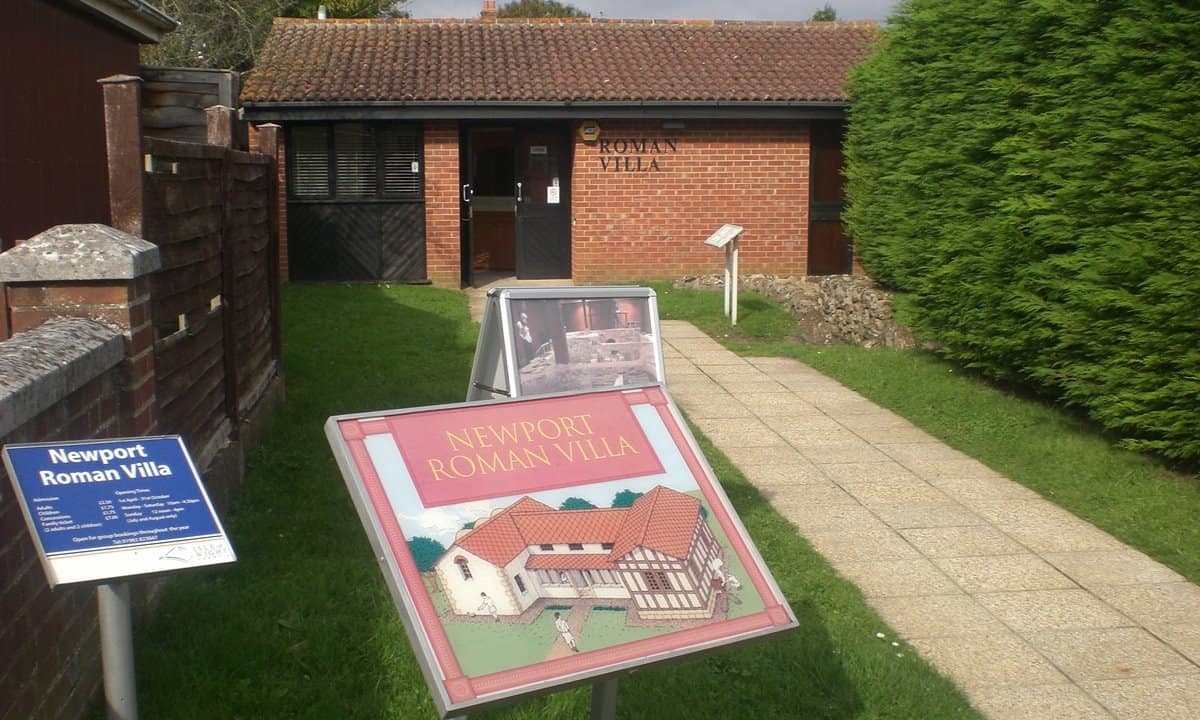 The entrance to the villa in Newport on the Isle of Wight.

The remains of this late Roman villa were found when in 1926 the nearby homeowner was digging the foundations for a garage. Due to public interest and support the site was saved and protected, with the villa partially reconstructed and now open to the public. Of particular interest is the well preserved bath suite, with hypocaust heating system, and kitchen. The skull of a woman in her 30s was found in one of the rooms, as well as window glass and painted wall fragments. The villa gives a good idea of life in the 3rd century AD on the Isle of Wight.
Maps: England | Roman World
Official Website 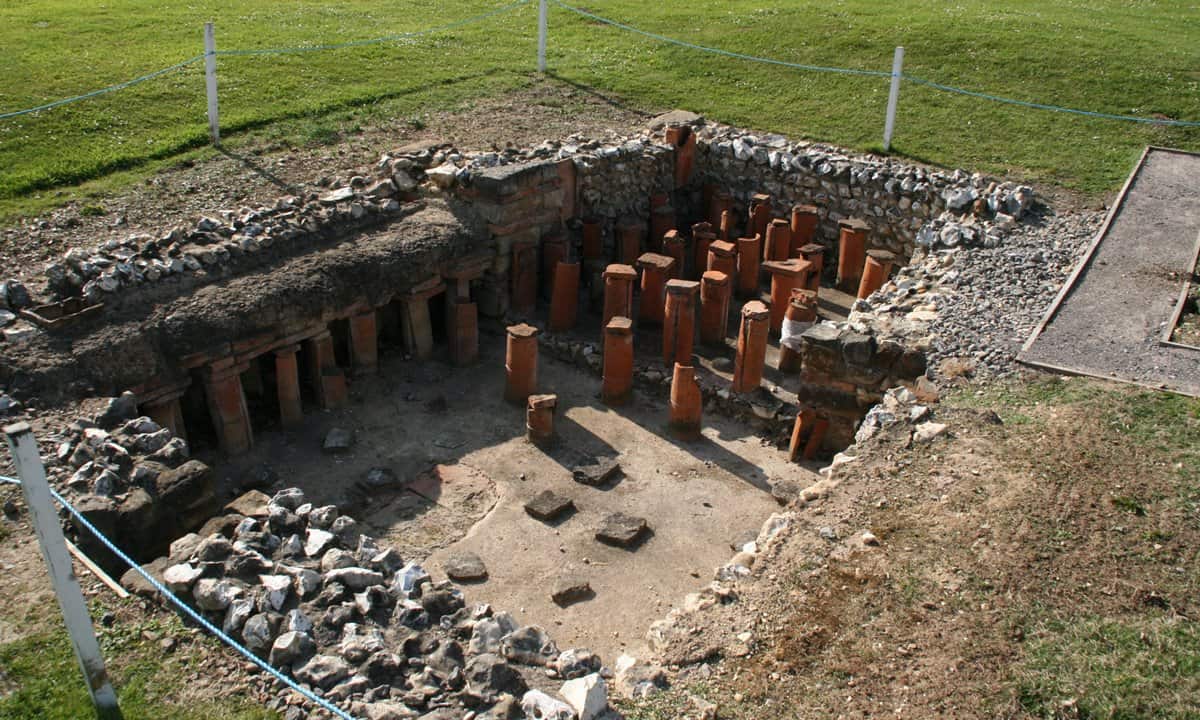 Near the New Forest, this Roman Villa with over forty rooms was one of the largest in the area and centre of a substantial farming estate up until the fifth century AD. Discovered in 1942, excavations have revealed extensive farm buildings and workshops, as well as living quarters and bath houses. Although some of the villa has been reburied for preservation reasons, still on display at the open-air outline of the villa are some of the better mosaic floors and parts of the underfloor heating systems.
Maps: England | Roman World
Official Website 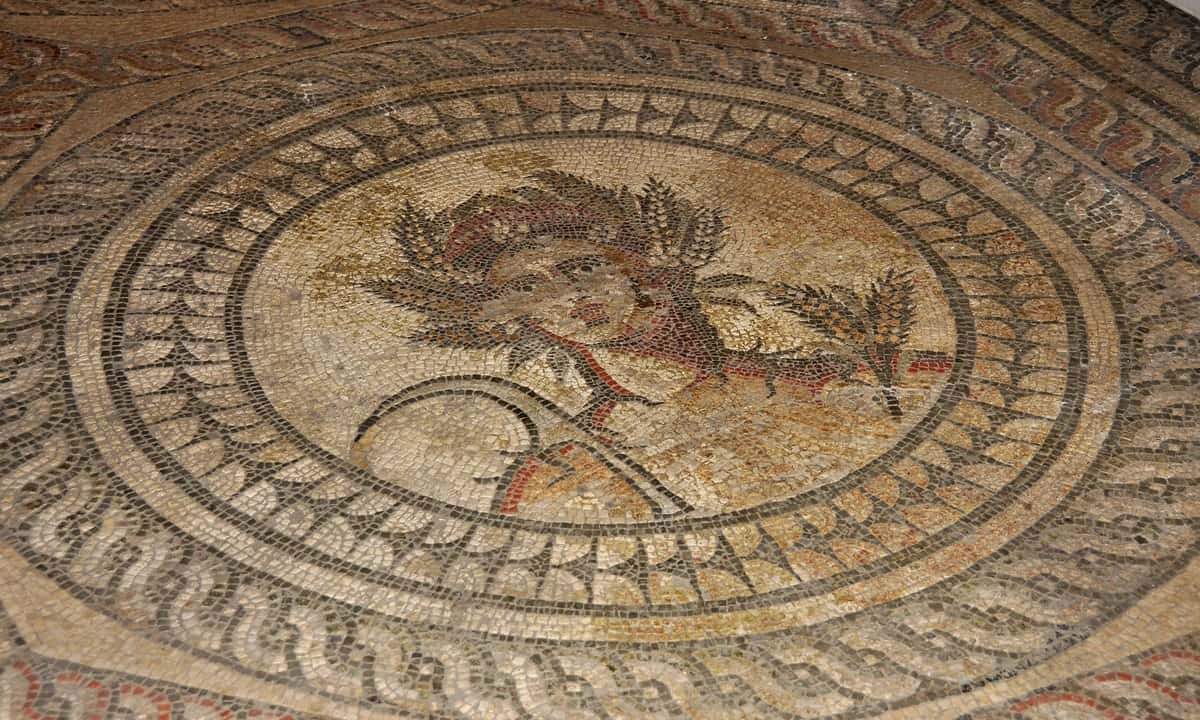 Ceres as summer in the Seasons Mosaic. Photograph © Nilfanion/Wikimedia

In the fourth century AD two groups of Roman mosaicists were based in Corinium Dobunnorum, the present day town of Cirencester. Together they made many of the mosaic floors for the wealthy villa owners in the area. The Cotswolds area is well known for exquisite mosaics, many of which can now be seen in the impressive displays of the award-wining Corinium Museum. As Roman Cirencester was the second largest town in Britain, the museum has one of the largest and finest collections of antiquities and mosaics in the country.
Maps: England | Roman World
Official Website 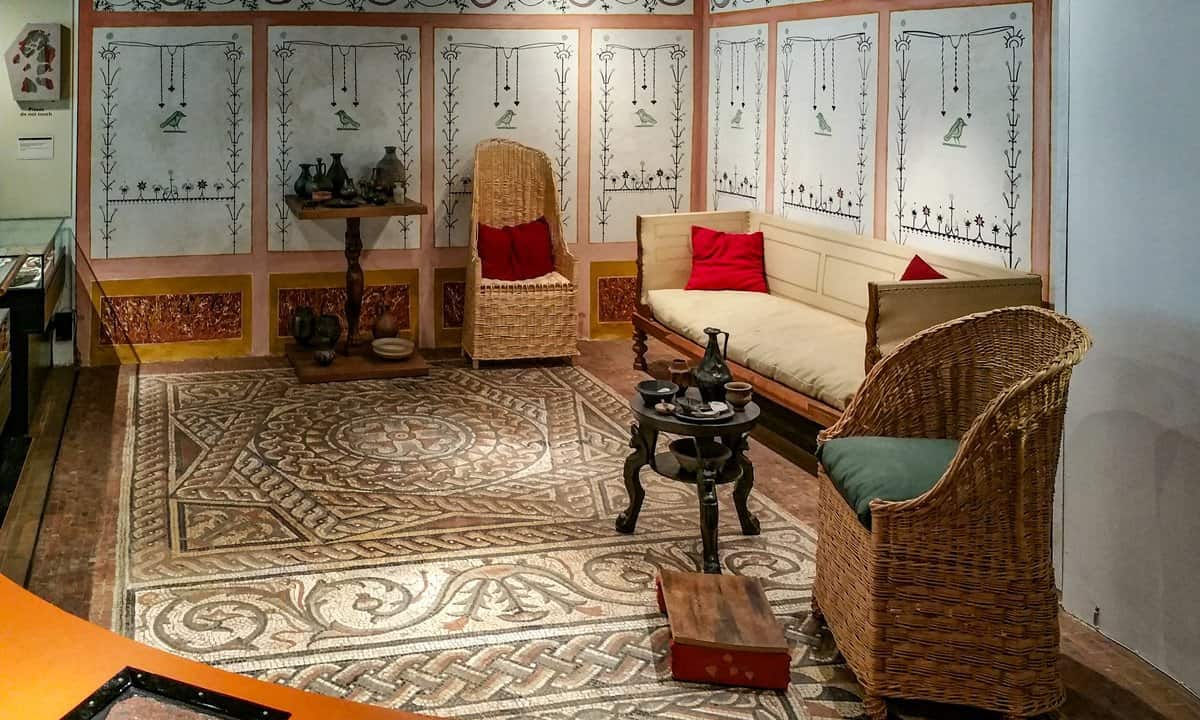 The Bucklersbury mosaic was found in 1869 neat Queen Victoria Street.

The Museum of London has an extensive series of displays on the Roman period of London; as well as other periods from the Stone Age to the recent past. One of these includes a reconstruction of a triclinium (dining room) from the home of a wealthy family living in Londinium. The objects on display in the reconstruction (excluding the furniture) and the mosaic floor come from excavations around London. The superb Bucklersbury mosaic is the largest surviving Roman mosaic to have been found in London.
Maps: England | Roman World
Official Website