10 Arts and Crafts Houses You Can Visit in England

With its origins in England in the mid 1800s, the Arts and Crafts movement spread throughout the world. This international trend in the decorative and fine arts greatly influenced the design of houses, their interior decor and furnishings. Often quirky and simple, but stylish nonetheless, they are easily recognisable. From Devon in the south west to London in the south east. West Sussex in the south to Cumbria in the north, you can find examples throughout England. The following is a list of ten English Arts and Crafts houses that visitors can actually go into, rather than just admire from the roadside. 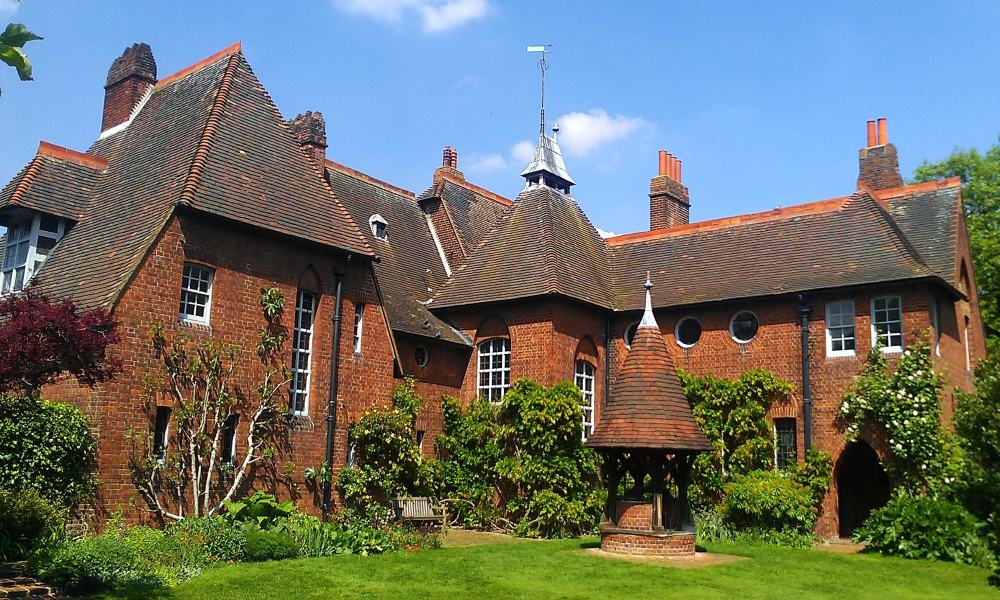 One of the earliest Arts and Crafts houses, the Red House in Bexley Heath. Designed by Phillip Webb and William Morris, and is where Morris lived for five years in the 1860s. Photograph © Ethan Doyle White

The Arts and Crafts movement has its origins in England during the second half of the 19th century. Largely as a response to what its proponents saw at the Great Exhibition of 1851. More specifically it was a reaction against the mass production and homogenisation of Victorian design. Inspired by the architect Augustus Pugin and the writer John Ruskin, the movement became more mainstream when William Morris started his company for which he would both design and manufacture. The focus was on design aesthetics, using locally sourced materials and local craftsmen.

Arts and Crafts houses are easily recognisable with asymmetrical roofs, often gables, and a distinctive form and structure. The emphasis is on using traditional methods of construction and craftsmanship. The houses tend to blend the charms of a traditional country cottage with a house of larger proportions, providing a quirky character which is often absent in large properties.

As the construction features are so important to the style, they tend to be exposed, with brickwork and timbers on display. Chimneys are usually oversized, leading to brick or stone fireplaces inside and the windows are often made up of smaller panes for a more traditional look. Front doors tend to be substantial and made of wood, and are often included as a main feature in a porchway.

Although the style only lasted for a short time, being lost in the practicality demanded by the world wars, it is still hugely influential today. Many people pine for a return to individuality in design and the landscapes around us, when once again everything is becoming homogenised, globally as well as locally. Now that the significance of the Arts and Crafts movement is being recognised and appreciated, more properties are opening their doors to visitors who are on a quest for the quirky and unique. 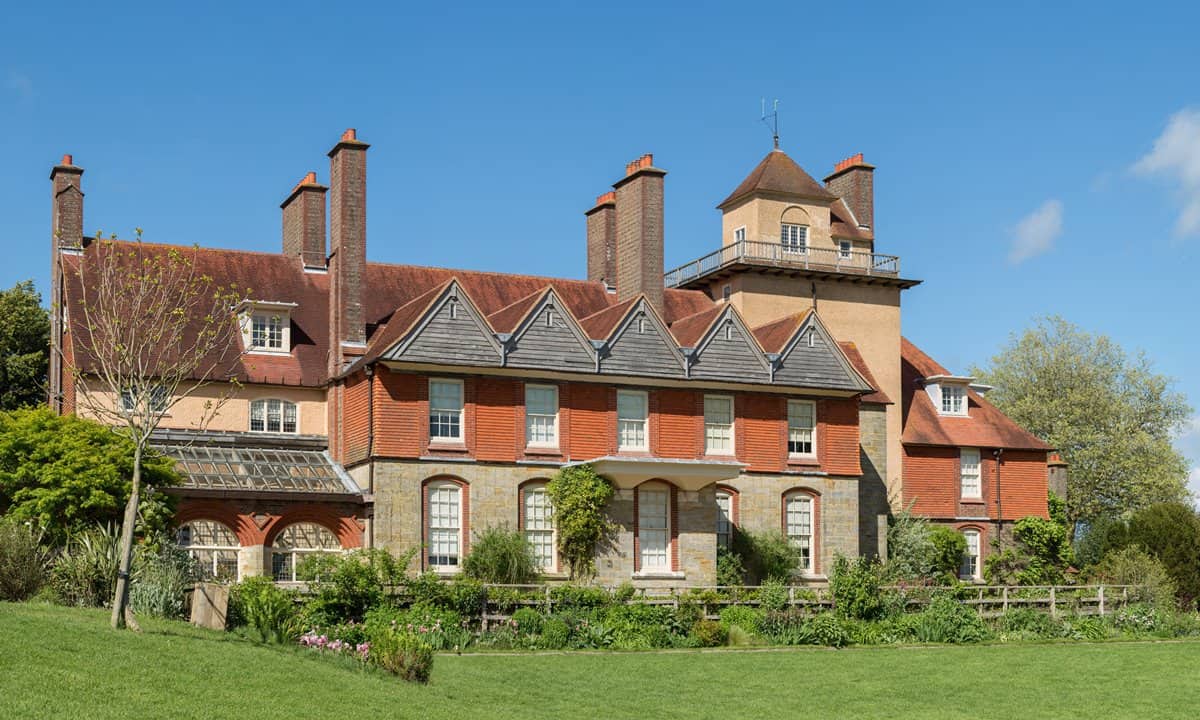 Standen House displays the Wealden vernacular style, with sandstone coming from the estate and bricks and tiles being locally made. Photograph © David Illif

This Grade I listed house was built by Phillip Webb in the late 1890s, who designed it for James Beale, a wealthy London solicitor, and his large family. Webb drew his inspiration from Medieval farm buildings, but created a thoroughly modern house. Built from local construction materials and lavishly decorated inside with William Morris interiors, the house also still has its electric light fittings which were installed when the house was built. The garden was planned as a continuation of the house and the two were meant to form a whole. The house is now owned by the National Trust, who are currently restoring the garden to its former glory. More details >> 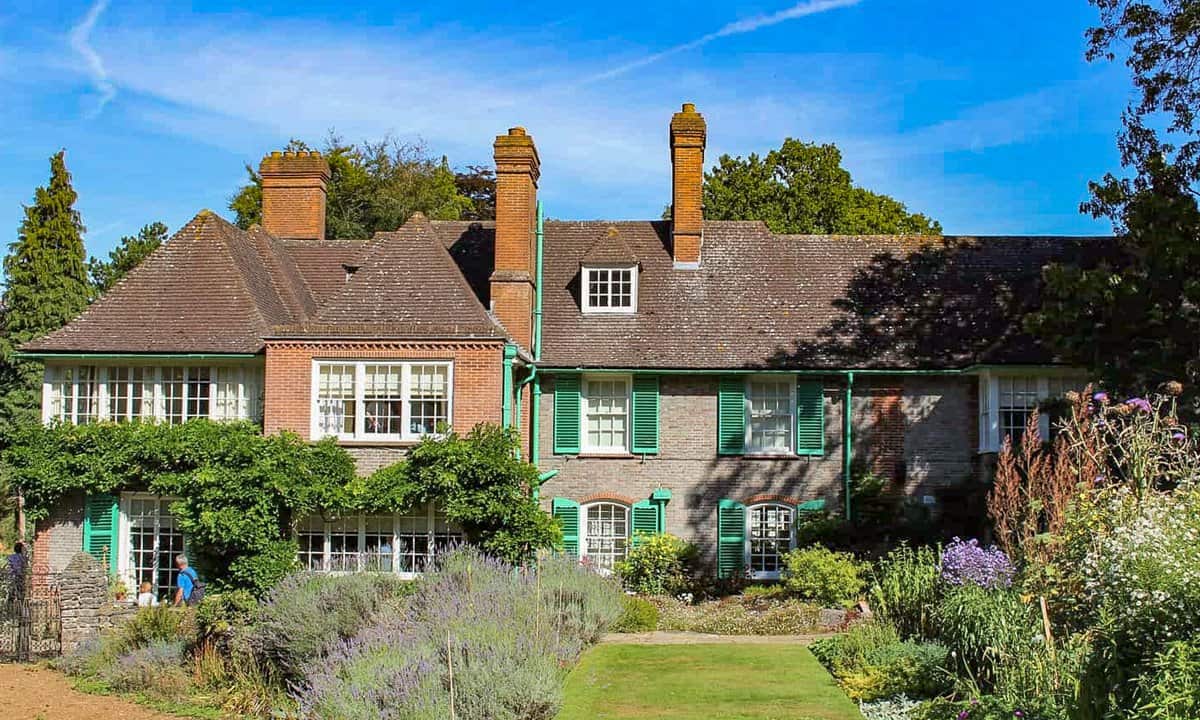 This Arts and Crafts home was built in 1914 and later bought and now named after Lord Nuffield, William Morris. (Not to be confused with William Morris the designer and social activist who played a prominent in the development of the Arts and Crafts movement.) Lord Nuffield was the creator of the Morris motorcar and one of Britain’s greatest philanthropists. He gave away substantial amounts throughout his life, including providing iron lungs that were made in his factories to commonwealth countries. A modest home, Nuffield Place has typical Arts and Crafts exterior features and interiors, as well as a quaint, well kept garden.

Now owned by the National Trust, the interior of the house has been staged to look just as it did when Lord Nuffield and his wife Elizabeth Anstey lived here. Authentic furnishings from the 1930s along with many of their personal items provide a glimpse into the lives of this very well-to-do couple. Read more about visiting Nuffield Place and the life of Morris. 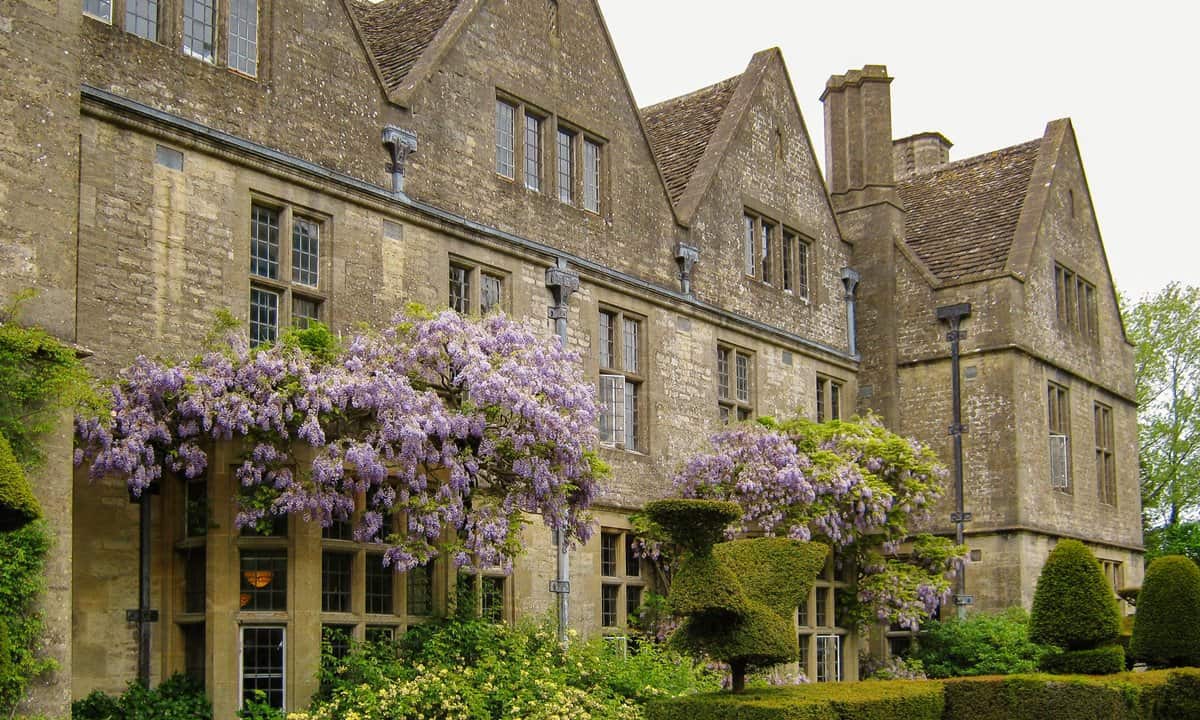 Built in a soft Cotswold stone, this large Grade I listed, privately owned house was built in the early 20th century, hand crafted from wood and stone by local craftsmen. Described as ‘The English Arts and Crafts Movement at its best is here’ by leading architect C R Ashbee, it was designed by architect Ernest Barnsley, a follower of William Morris, for the Biddulph family who still own it today. One wing of the house was used for teaching community crafts and the interior furnishings were all bespoke and made locally. Part of the gardens are landscaped as ‘rooms’ following the Arts and Crafts style. Although privately owned, the house and its eight acres of gardens are open to the public for two days a week in the summer months. More details >> 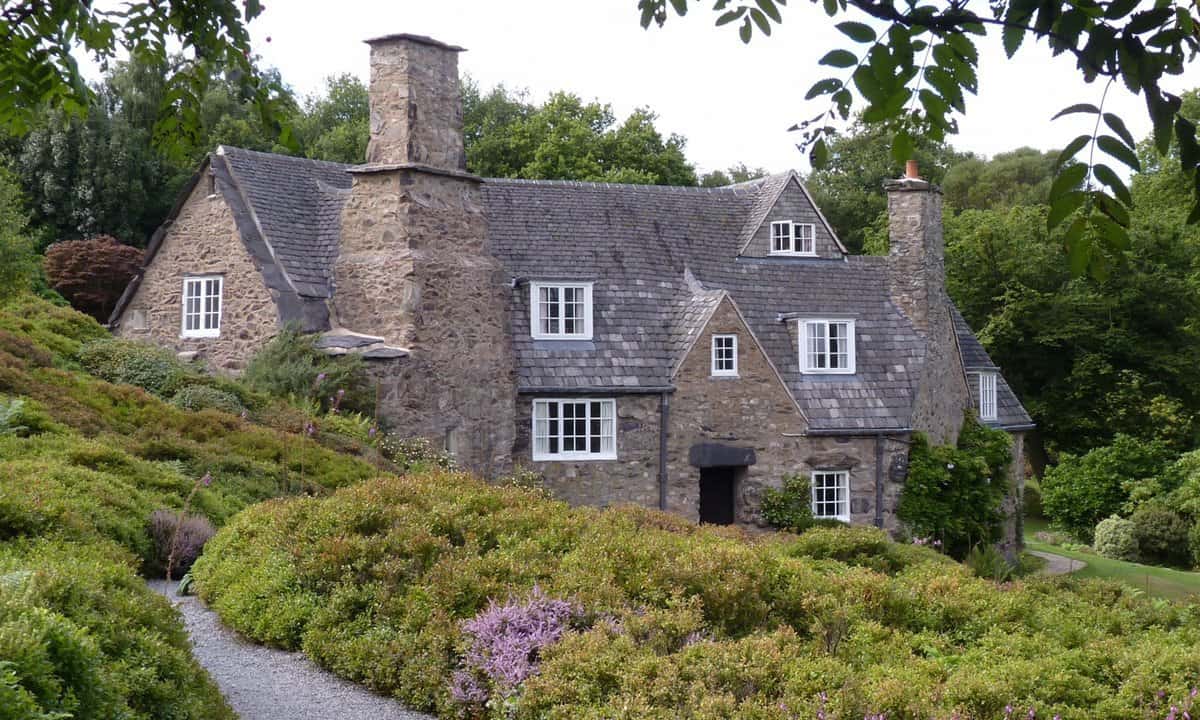 Only recently opened to the public, the house was designed by Ernest Gimson, a leading figure in the Arts and Crafts movement, for his brother in 1899. Gimson had met and been greatly influenced by William Morris, who steered him towards his career in architecture.

Gimson developed a strong friendship with the Barnsley brothers, Ernest and Sidney. And worked closely with them for most of his life. The Barnsleys were master builders and very highly thought of for their furniture designs. As Stoneywell was a family home, much of the furniture stayed in the house and a lot of what is in the house today is original. With his friends, Gimson paid close attention to hand crafting everything from the exterior to the interior. In true Arts and Crafts spirit. From the asymmetric gabled roofs to the stone clad fireplaces. The house is now in the hands of the National Trust and is open to visitors. 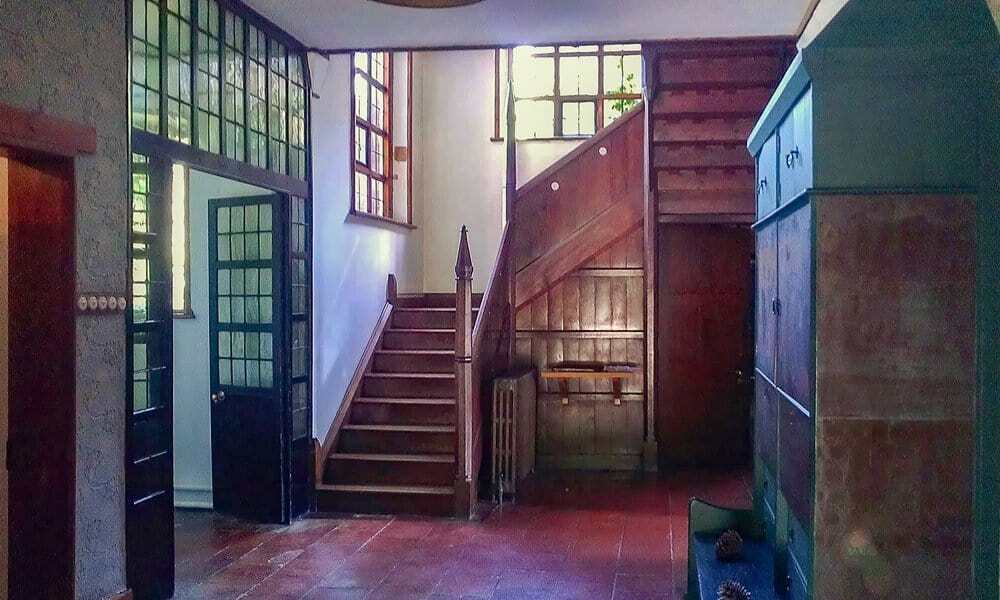 The hallway and entrance to the Red House. Photograph © Ethan Doyle White

The Red House just outside London is one of the earliest examples of an Arts and Crafts house. It was designed by Phillip Webb and William Morris and built in 1860. The house was built using their principles of hand crafting and artisan skills. For five years the house was Morris’ family home becoming the centre of the Arts and Crafts movement. Consequently many famous members of the movement came, and their artwork is still on the walls today.

While living here, Morris started his famous Morris & Company. The house is now owned by the National Trust who are currently in the process of restoring the gardens to the original designs. It was Morris’s designs for the garden that influenced his designs to furnishing. More details >> 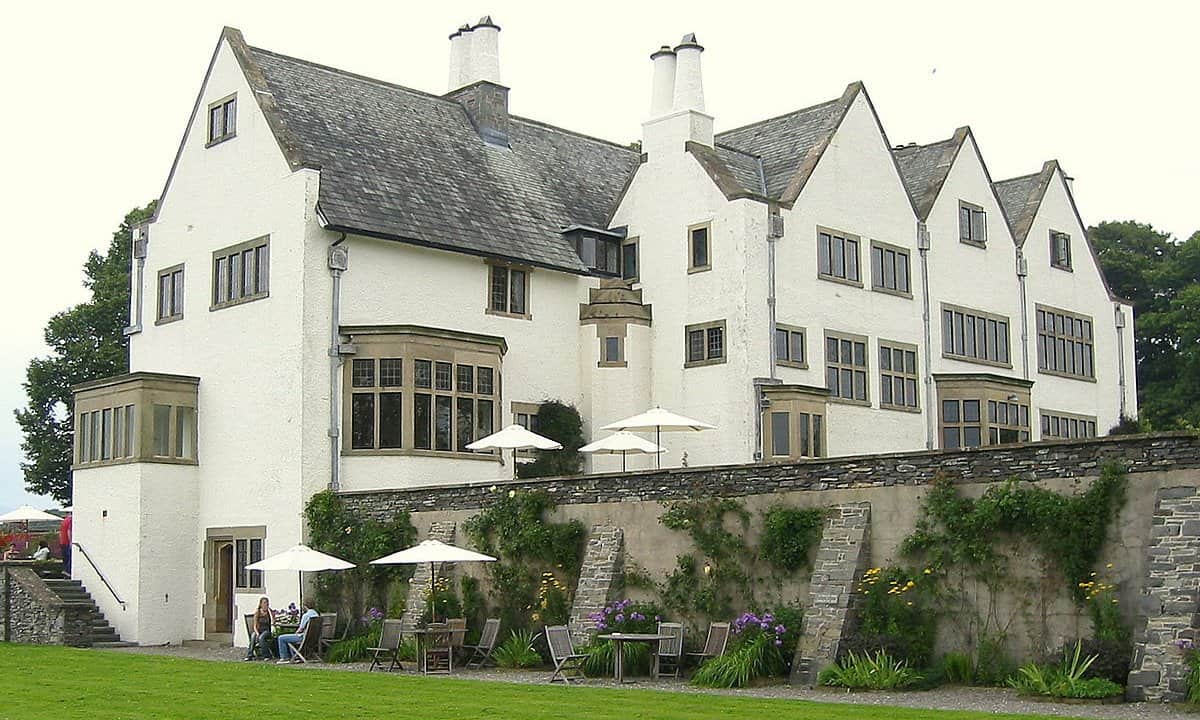 The house was designed by Baillie Scott and the gardens were designed by Thomas Mawson, an Arts & Crafts garden designer. Photograph © GavinJA/Wikimedia

This Grade I listed house which overlooks the lakes of Cumbria was designed by the famous architect, Baillie Scott, and completed in 1901 as a holiday home for wealthy brewer, Sir Edward Holt. The large house is considered to be a masterpiece of the Arts and Crafts movement and still has many of its original features as well as interior furnishings such as wood panelling, stone fireplaces and timber beams. The terraced gardens were designed by Arts and Crafts garden designer, Thomas Mawson, and overlook some stunning views of the Lake District. The house is now owned by Lakeland Arts who have opened the house to the public >> 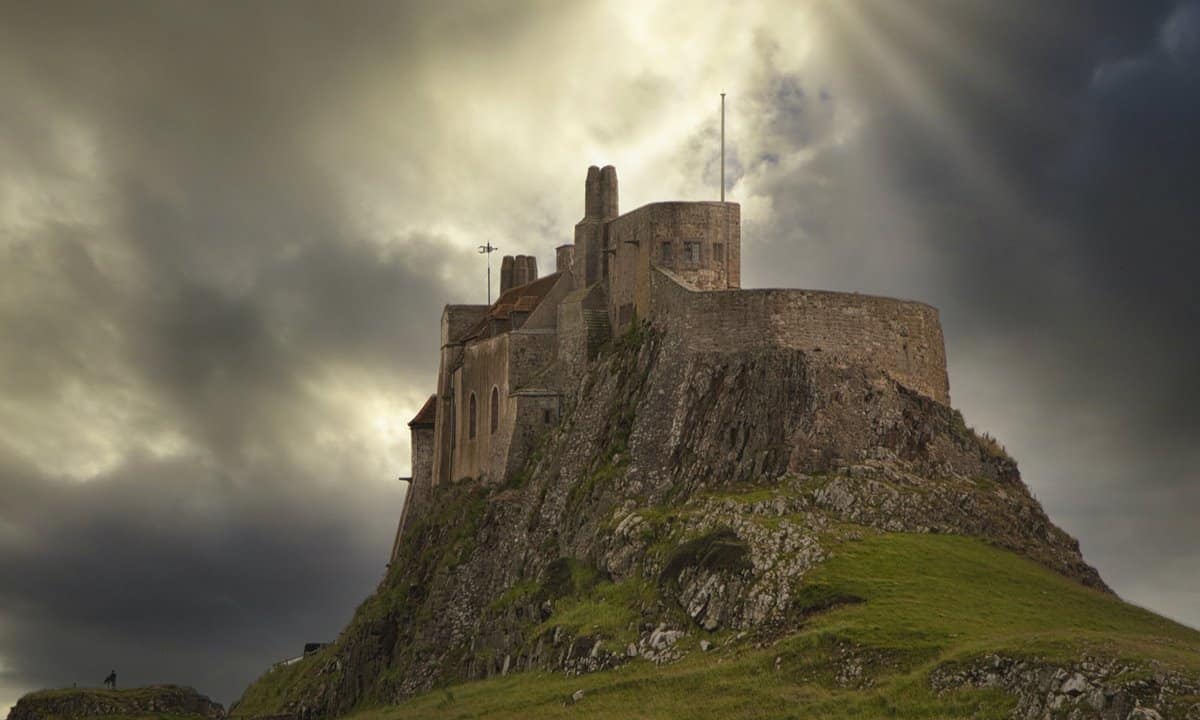 Although built in the 16th century, the castle was substantially remodelled in keeping with Arts and Crafts aesthetic.

Lindisfarne is a 16th century castle on Holy Island in Northumberland, which was originally built as a fort. It was extensively altered in 1901 when it was bought by Edward Hudson, the owner of Country Life magazine, who brought in Sir Edwin Lutyens to remodel the property. He removed many of the fort’s original features, leaving instead a comfortable Edwardian holiday home with a strong Arts and Crafts influence.

Nearby is the Gertrude Jekyll garden, which she created alongside Lutyens in 1911 and which has a typical geometric Arts and Crafts layout. Both castle and garden are owned by the National Trust and open to the public. >> 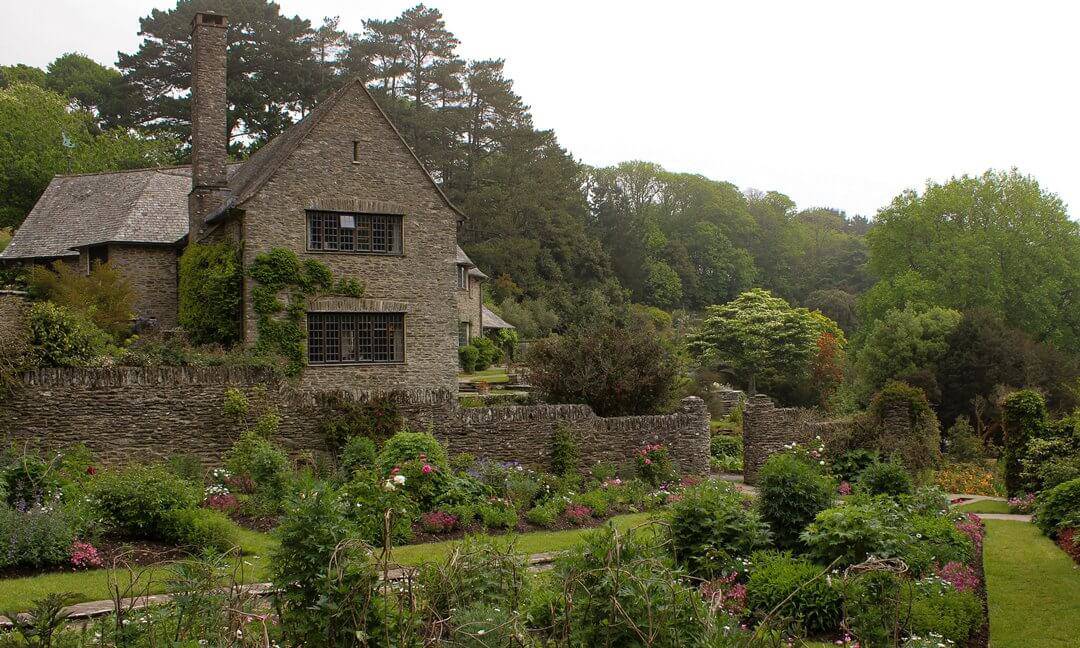 This wonderful Arts and Crafts house was built in 1925 as a holiday home for the D’Oyly Carte family, sits at the top of cliffs along the Devon coast near Dartmouth. It has a typical Arts and Crafts exterior, including such features as pitched roofs, making use of simplistic, hand crafted design. There are beautiful and extensive gardens which are divided up into ‘rooms’ in the Arts and Crafts style, and which lead right to the sea.

Now a National Trust property, both the house and gardens are open to visitors. The interior is decorated for the 1930s and really conjures up a vivid depiction of life for the wealthy in the time of Art Deco. For those who enjoy historic places to stay, the estate includes a period holiday flat. 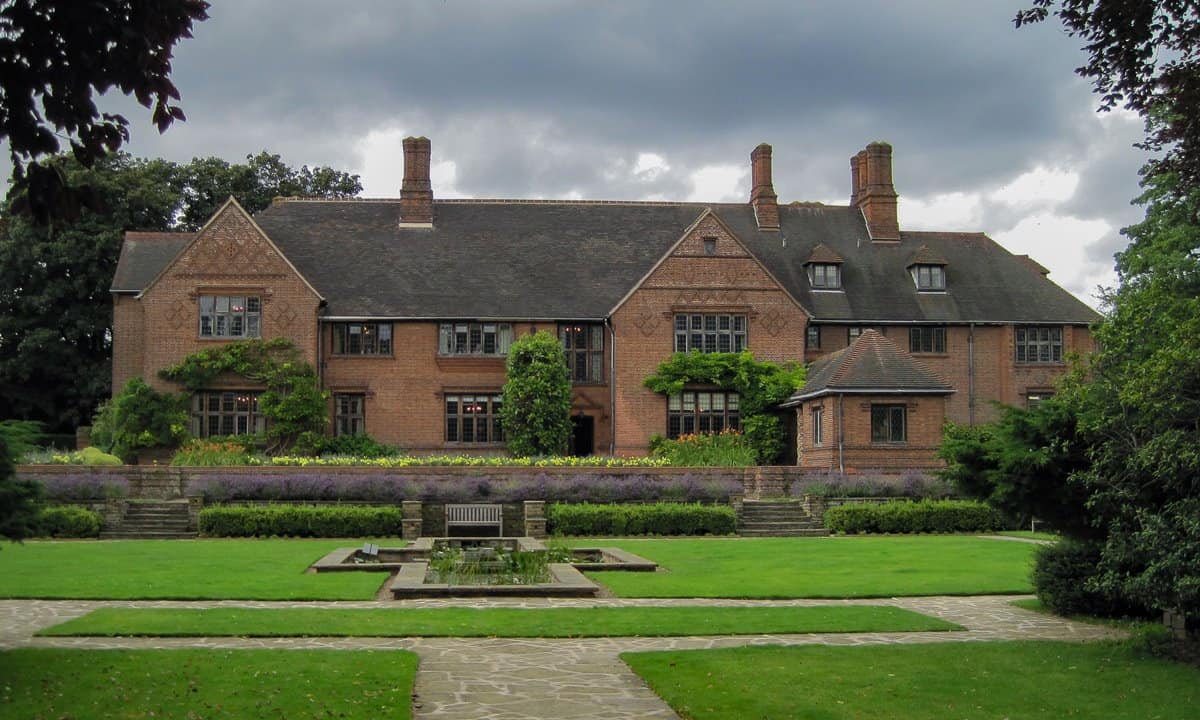 Built in 1927 for members of the Terry’s chocolate manufacturing family, this house in York was designed by local architect Walter Brierley, who has been described as a Luyens of the North. As well as the typical hand crafted styling of the exterior, with asymmetrical gables, decorative chimney stacks and geometric bricks, the interior has many original features such as an oak carved staircase, Arts and Crafts wallpapers and wooden panelling. The garden is typical Arts and Crafts style, divided up into different ‘rooms’, herbaceous borders and a cruciform lily pond. Since the 1980s the house has been a regional headquarters for the National Trust, but now has rooms and gardens open to the public. >> 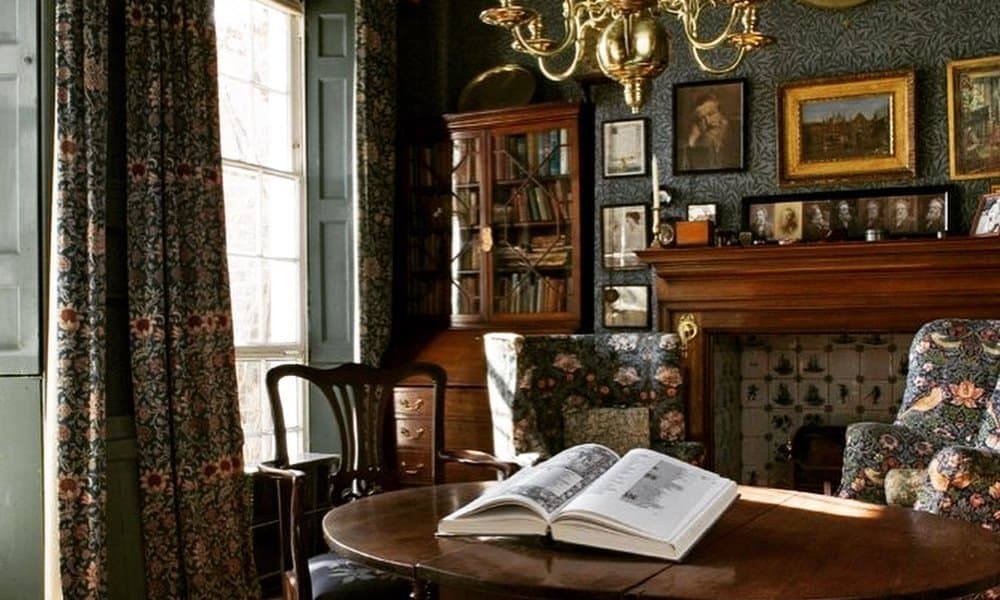 The Hammersmith Terrace in which we find Emery Walker’s house was built around the turn of the 19th century. But it is the interior that is of interest for this list. Emery Walker was the founder of the private press revival and a central figure of the Arts and Crafts movement. He was a good friend of William Morris and they had much in common.

Emery Walker lived in the house from 1903 until his death in 1933, when his daughter inherited the house and preserved as much of it as she could. The house is now owned by the Emery Walker Trust who run guided tours on Thursdays and Saturdays in the summer months for visitors.