As Gothic cathedrals go, the Cathédrale Notre-Dame d’Amiens is one of the finest in France, if not all of Europe. Besides its impressive size, Amiens cathedral is well known for its medieval wall paintings inside and the truly spectacular Gothic sculptures that adorn its western façade. During the day visitors can see the excellently well preserved Renaissance polychrome wall paintings and sculptures inside the church. At night, during summer and December, the sculptures on the western façade are lit up during an engaging light show. 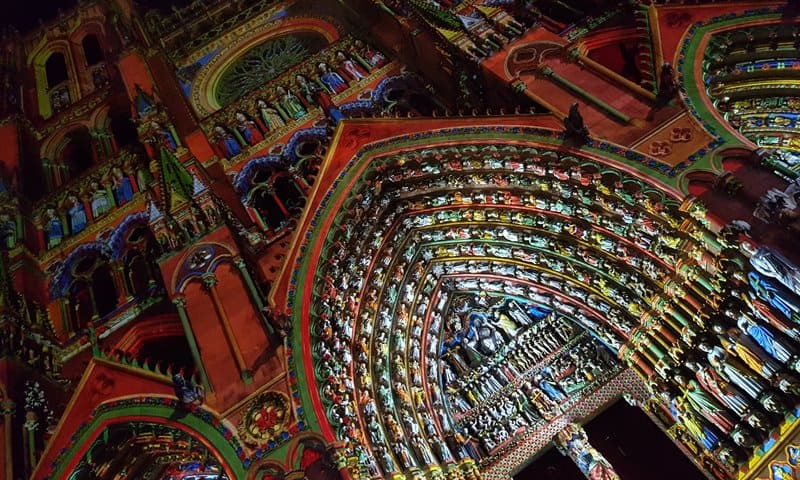 The brilliant colours superimposed on the sculptures of the cathedral’s western façade during the light show.

By far the dominant feature on the Amiens skyline is the Cathédrale Notre-Dame d’Amiens, or the Cathedral of Our Lady of Amiens. Today the imposing nature of the cathedral competes with other more modern buildings, and in Amiens it still wins. 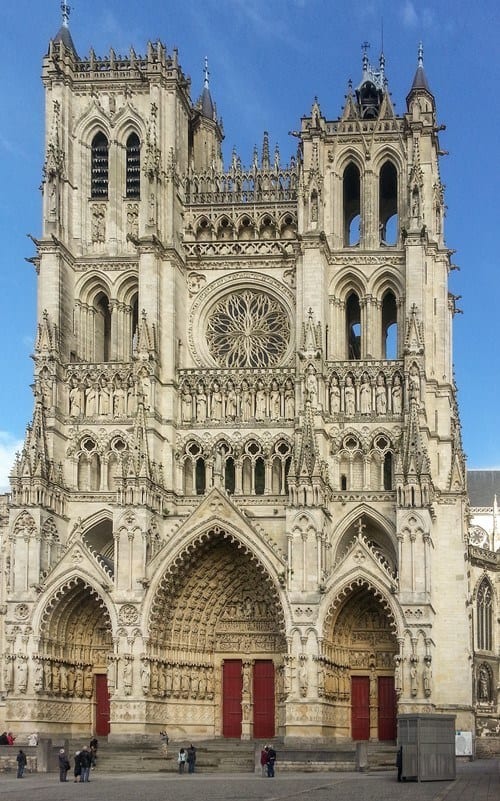 The western façade, with the beautifully carved portals.

The current cathedral, what we see today was built between 1220 and 1288 AD. Unfortunately, very little is known about the construction of this cathedral as all the documents were destroyed in two fires: 1218 (the one that destroyed the previous church) and 1258. The second fire also damaged the cathedral itself. But it is the quantity and quality of the 15th and 16th century Gothic sculptures, both internal and external, as well as the polychrome wall paintings that the cathedral is best known.

Western entrances to Gothic cathedrals are known for their detailed sculpture, usually featuring saints of local importance and scenes that deal with humanity’s destiny. The western façade on Amiens cathedral is no different. In fact it is one of the finest in western Europe. This part of the church was built between 1220 and 1236, during one single construction episode; hence the striking and rare artistic unity. The lower tier has three deep portals, above which is a gallery stretching the full width of the church, just below the rose window. Twenty-two larger-than-life sculptures of kings fill the gallery. Above the rose window is an open arcade, that holds the bells. the galerie des sonneurs.

So spectacular is this cathedral, it was added to the UNESCO list of World Heritage Sites in 1981.

In 2020 the cathedral will be marking 800 years since construction began on the current building. A full programme of events in the city of Amiens will mark this anniversary (Official Website). These celebrations start with a spectacular sound and light show beginning 22 November 2019 at 19h00. And continues through to the end of December 2019.

Despite Claude Monet’s 30 odd versions of the front façade of the Cathedral in Rouen, most of us see the façades of Gothic cathedrals in shades of grey and black. The Amiens cathedral allows us to see a very different image. During the early 1990s restorers began working on the western façade and the many amazing Gothic sculptures. The laser process used to clean up the blackened stone revealed that the sculptures had once been intricately coloured – with multiple colours used to highlight different features of the figures and their clothing. Instead of ‘repainting’ the front of the cathedral, a son et lumiere show was devised, which has become one of the most popular attractions in Amiens. 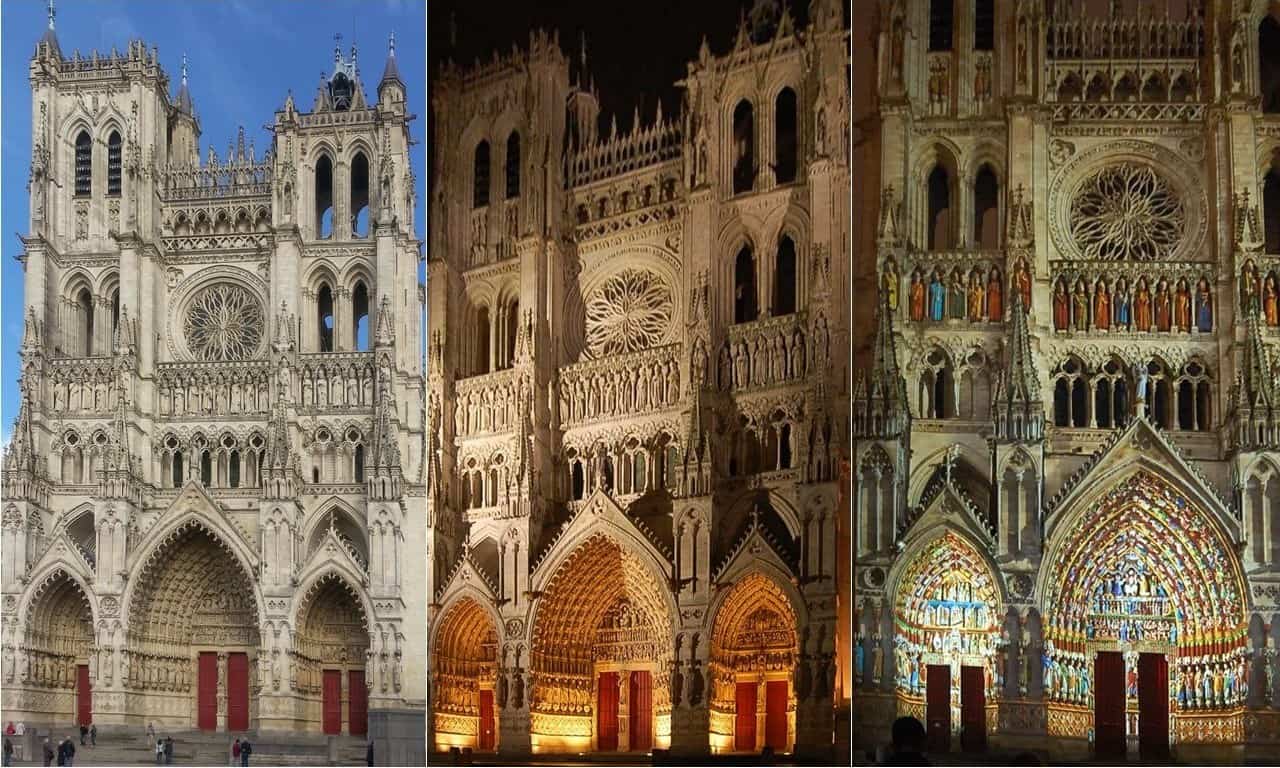 The cathedral’s western façade as you see it during the day (left), as it is lit up at night (centre), and as it appears during the light show – with the sculptures in colour (right).

As immediately impressive as the structure and the sculptures are during the day – and it really should not be overlooked, it is experiencing the son et lumière show at night that really should not be missed. The following is a very short Youtube clip of a show that lasts about 30 minutes with a French commentary, that is followed by a 20 minute commentary in English. 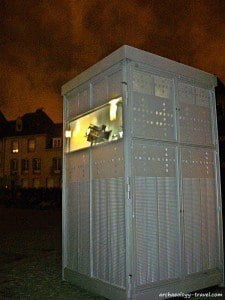 One of the five projection boxes.

One of the most amazing aspects of the light show is fine detail of colour that is applied to the statues. The principle is quite simple, it really is a matter of hi-tech colouring in.

Photographic slides of the façade were taken and digitally touched up to remove any shadows. Colour was also digitally applied to the transparency, matching the the various sculptural details. These digitally coloured transparencies, nine in total, are then projected onto the church front in the dark (it would not work during the day) to give an impression of what the cathedral might have looked like in Medieval times. There are five projection boxes placed around the edge of the square in front of the church. In the photograph above of the church during the day you can see one of the projections boxes in the bottom right.

Besides the visual effect, a commentary (in both French and English) tells the story of the cathedral as well as the symbolism of the sculptures and the colours the Medieval artists would have used.

The results are truly spectacular.

What are the dates for the Amiens Cathedral Light Show?

The Amiens Cathedral light show is put on each night in summer from 15 June to the third Sunday in September, once it gets dark. And then again in December as part of the Amiens Christmas market. There are also special showings at midnight on Christmas Eve and New Year’s Eve. For people looking for something different, something out of the ordinary – this really is a wonderful way to see in the New Year. Take your champagne!

What Time is the Amiens Cathedral Light Show?

During the Christmas period the show starts at 19h00 every night during December, during the city’s Christmas market season.

If you are visiting on Friday and Saturday, you might want to arrive early to get a good seat. Oh, and the seats are stone steps, so take a cushion or something to sit on. Even in summer sitting on those steps for close to an hour is not the best experience.

Take a Look inside the Cathédrale Notre-Dame d’Amiens

Although the cathedral is not open at night (before or after the light show), I do recommend taking time to visiting during the day. For times and prices, and other details, visit the Official Website. Guided tours are available, but at different times throughout the year. 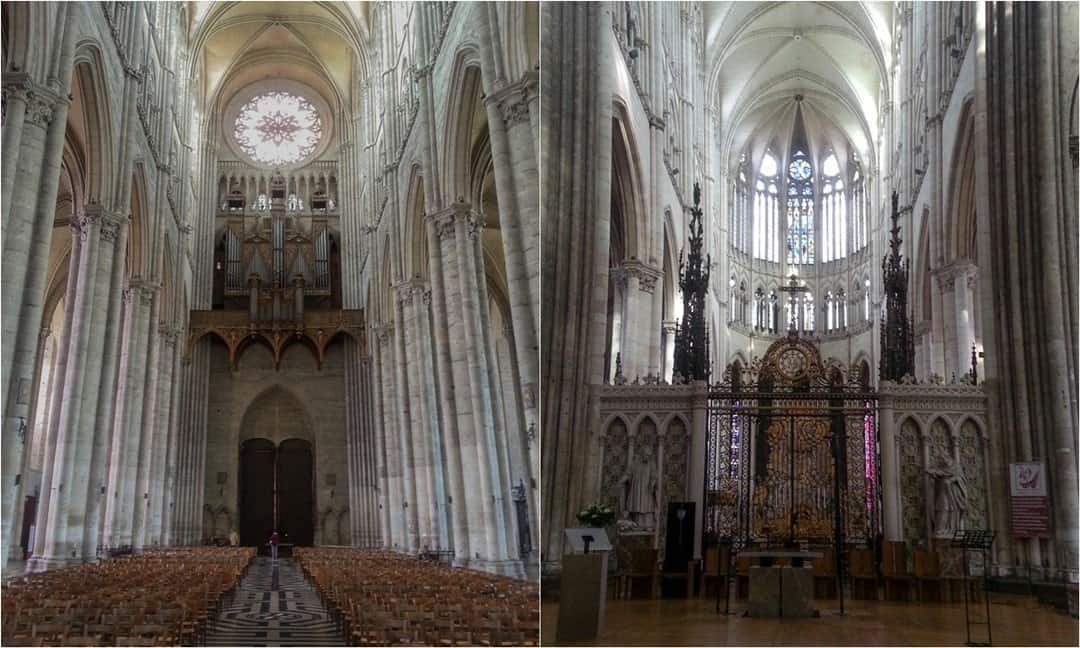 One of of the first impressions on entering the cathedral is how bright it is. Certainly it is noticeably brighter than most other Gothic cathedrals in Europe. This is because the Medieval builders constructed a vast interior, thought to be about 200,000 cubic meters, with a stone vaulted nave that has an internal height of 42.30 metres (or 138.8 feet).

With these dimensions, Amiens cathedral is not only the highest, complete church in France, it also has the greatest interior volume of any other church in France. On a worldwide scale, Amiens Cathedral is the 19th largest church. The larger size allowed the builders to add more windows. Sadly, not much of the stained glass is original. 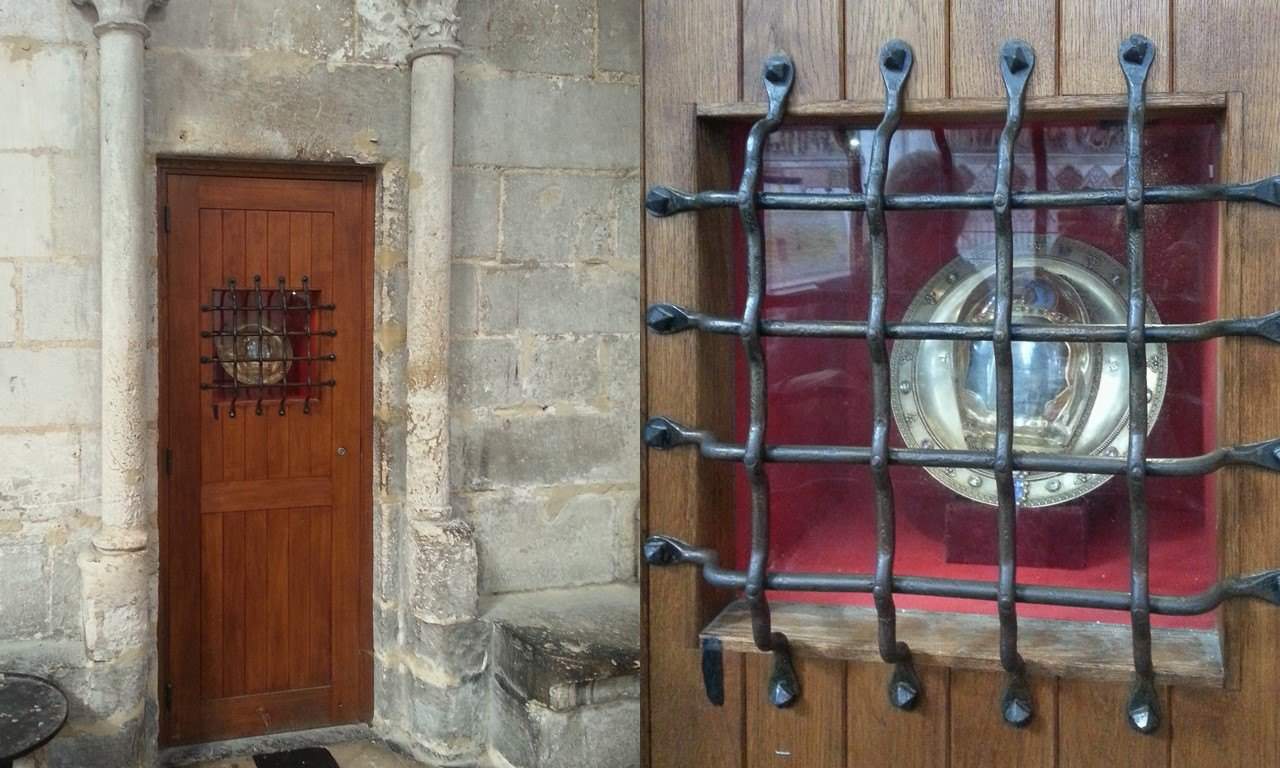 One of the reasons for building the cathedral in Amiens was to construct a reliquary for the head of Saint John the Baptist. The holy relic was taken during the Fourth Crusade. Although that relic was lost, a replica made in the 19th century was installed in the reliquary. 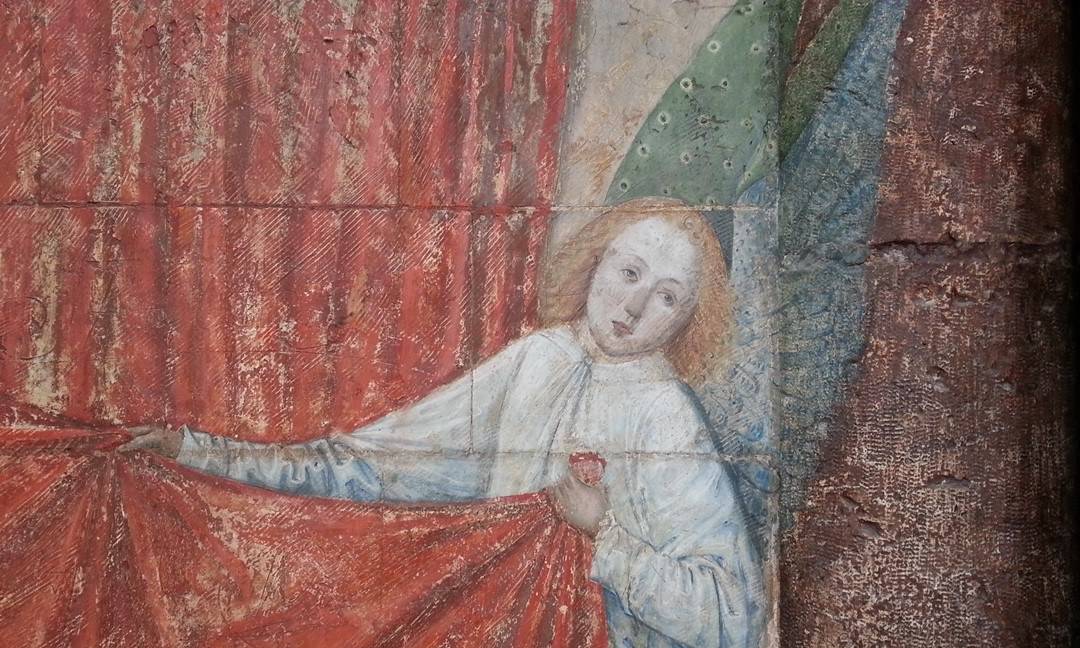 Both sides of the ambulatory are lined with extraordinarily well preserved polychrome painting and sculpture. These dates to the end of the late 15th century and early 16th century. The north transept has a sequence of sculptures that show Jesus Christ cleaning the temple. While the lives of Saint John the Baptist and St Firmin are depicted in each of the two ambulatories. 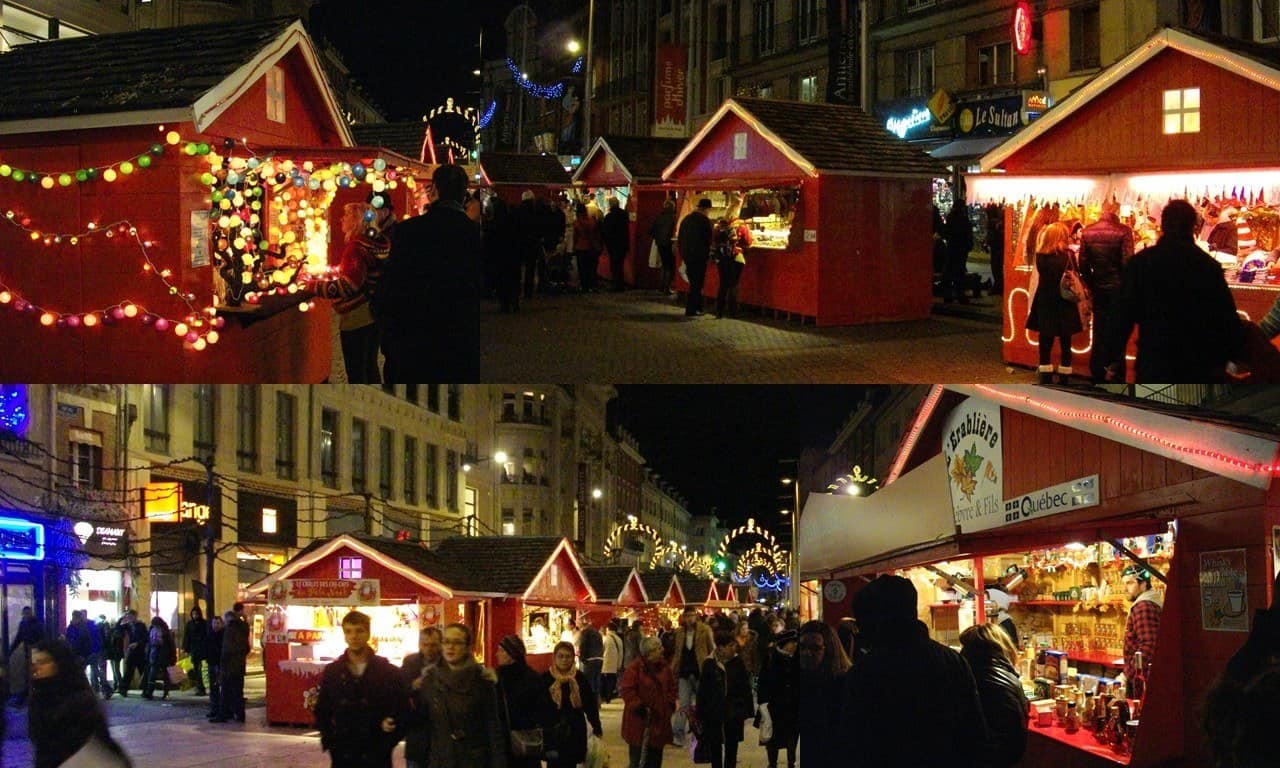 Although there really is nothing wrong with visiting Amiens in the summer (there are a number of important archaeological sites and museums in the area, click here for more information), Amiens in December is enchanting, if you like Christmas markets.

When you are done with the cultural attractions, well over 100 market stalls line 2kms of the main street through the city – stalls from all around the World. The stalls open around 10h30 each day, except Monday when they open at 14h00; they close at 19h30. Grab yourself a cup of hot, mulled wine and get yourself to the square in front of the cathedral to see the light show, which starts at 19h00. After that there are many restaurants to choose from, or enjoy the rides at the fun fair.

Amiens is a perfect city for a weekend break – it is only an hour by train from both Paris, about 50 minutes from Tille/Beauvais International Airport, and and just over an hour from Calais – and straight down the A16. By car, it is an hour and a half from Paris Charles de Gaule Airport and Lille, two hours from Brussels and four hours from London.

Amiens is only an hour by train from Paris – if you catch the right train. And there are around 20 trains a day between the two cities.

Amiens has a great range of restaurants and hotels. There are 23 hotels listed on the Agoda Website. Right next to the station is the cheap and cheerful Campanile Hotel, but if you are looking for something a little more classier, the five star Hotel Marotte is well worth its rating. Having stayed in both, I have no hesitation in recommending either. As good is the choice of restaurants. The best restaurants in my opinion can be found along the southern side of the cathedral and along the banks of the Somme River (both indicated with a knife-and-fork icon on the map above). The cocktail glass on the map indicates an area of trendy bars. 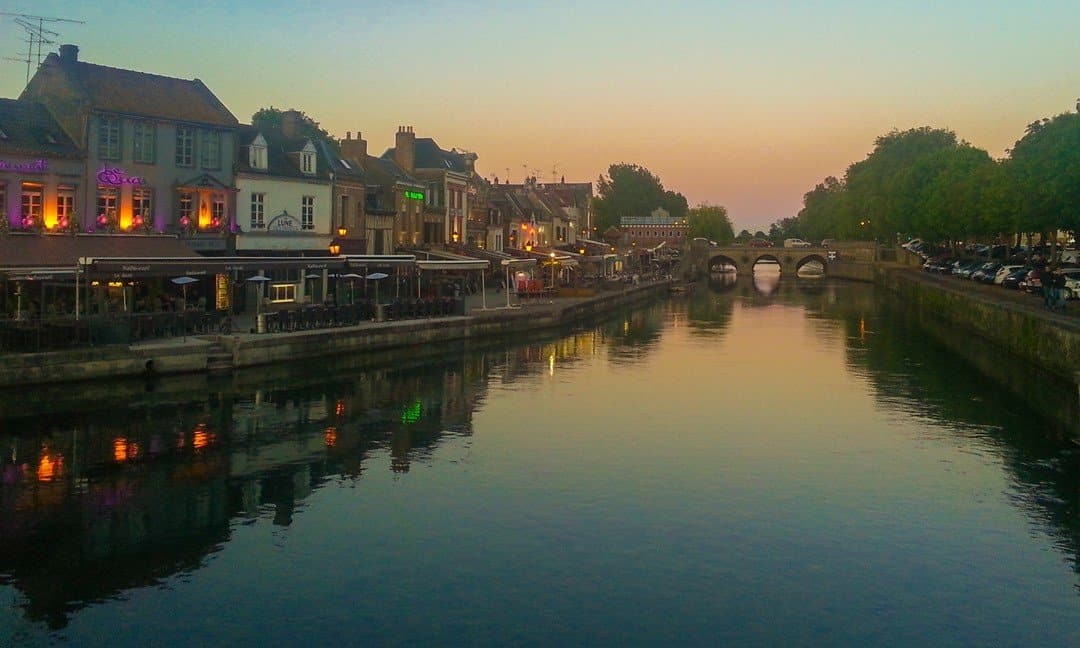 Just below the cathedral is a group of trendy bars, popular day and night. 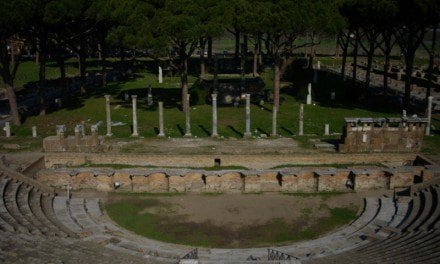 Ostia Antica, Getting Out of Rome City Centre Could Not Be Easier 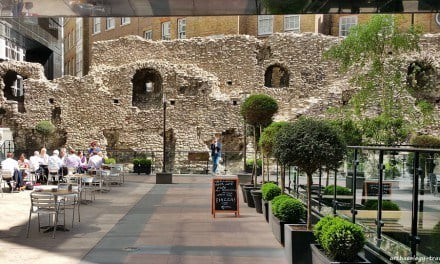 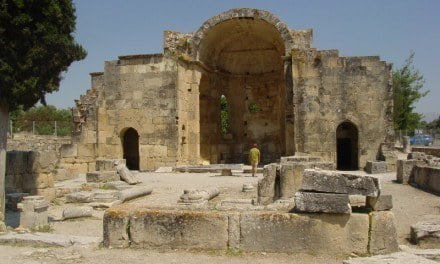