Ancient and Volcanic Landscapes of Milos

Milos has a long and fascinating past, both geological and archaeological. Much of the rich archaeological past is a direct consequence of the island’s geological past. This southern most island in the Cyclades lies on a volcanic arch that includes the island of Santorini. And it is the volcanic rocks and minerals that have been the backbone of this island’s economy for millennia.

The seaside town of Klima, with Plaka on the hill. The holes in the rock to the right of the seaside settlment are early Christian Catacombs.

While Island hopping in the Aegean you will often hear people say that each island has its own character. On a few occasions I have thought this is also true of the archaeology of the various islands. Although each island obviously passes through the same archaeological and historical periods, how these different periods are experienced today on each island seems noticeably different to me. There always seems to be something specific about an island that has greatly influenced its archaeology. And I think the island of Milos is a good example of this. 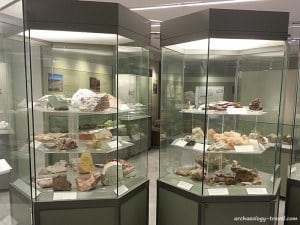 Geological specimens from around the island.

Mining is a major part of the island’s economy today, with such volcanic originating minerals as bentonite and perlite being exported all over the World. One of the island’s leading mining companies gave considerable support to a Mining Museum, which opened in 1998. Located in the port town of Adamas, for anyone with the slightest interest in geology and/or the history of mining – the museum is a must. Various cases, like those in the photograph here, have wonderful geological specimens that demonstrate the the incredible mineral wealth on Milos. But there is so much more to the museum than rocks in glass cases – even if they are pretty rocks!

A series of engaging permanent displays explores the history of mining and mineral extraction on the island, a considerable history that stretches back some 11,000 years to before the Neolithic and advent of farming in the region. 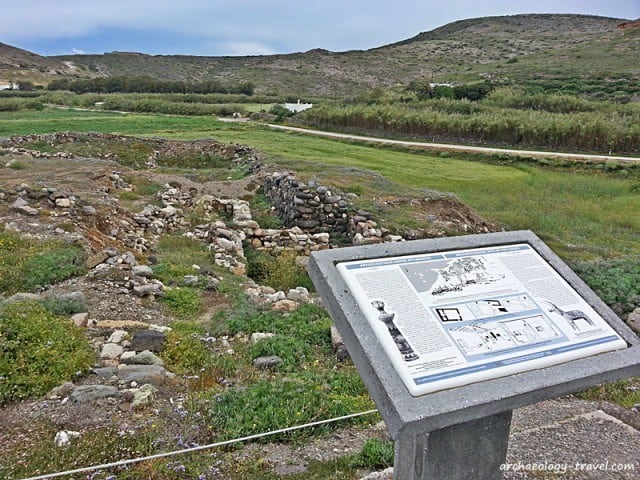 Looking on to the walls of the ancient site of Phylakopi.

As Milos is a volcanic island, there are natural occurrences of obsidian – a volcanic glass. It forms when lava that has a high silicon content cools rapidly with very little crystal growth. Obsidian is hard and brittle and fractures with an extremely sharp edge. A edge so sharp that some surgeons have experimented with using obsidian blades in surgery. 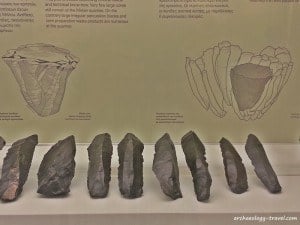 Not surprisingly then our prehistoric ancestors were using obsidian as a raw material for making cutting tools from the Stone Age. There are two obsidian quarries, at which there are an estimated 80 million stone artefacts made from about 13,000 tons of obsidian. The well set out displays in the Mining Museum show all the various aspects of this prehistoric stone tool industry, based on archaeological research that began back in the 19th century and more recently.

One of the most important archaeological sites on the island is the seaside settlement of Phylapkopi. Today, stone walls of part of the settlement are literally falling into the sea due to erosion of the coastline. When the site was first studied towards the end of the 19th century, the substantial obsidian workshops found in the site led archaeologists to believe that the importance of the settlement, and the island, was largely based on the trade of obsidian stone tools from prehistoric Milos throughout the Aegean. Phylakopi is situated between the two quarries, and on a part of the coastline that would have been favourable to sea going craft.

More recent research, however, questions these early suggestions. Phylakopi seems to have already been well established before obsidian workshops were introduced in the settlement. The more recent excavation of the site, in particular what is called the ‘sanctuary’, seems to suggest that the site may have had a more ritual or religious significance. The stunning artefacts recovered by archaeologists from the sanctuary can be seen in the Archaeological Museum of Milos, in Plaka. Whatever the place of obsidian trade in the establishment of Phylakoi, use of and trade in this volcanic glass was a significant part of the life of the archaeological site. 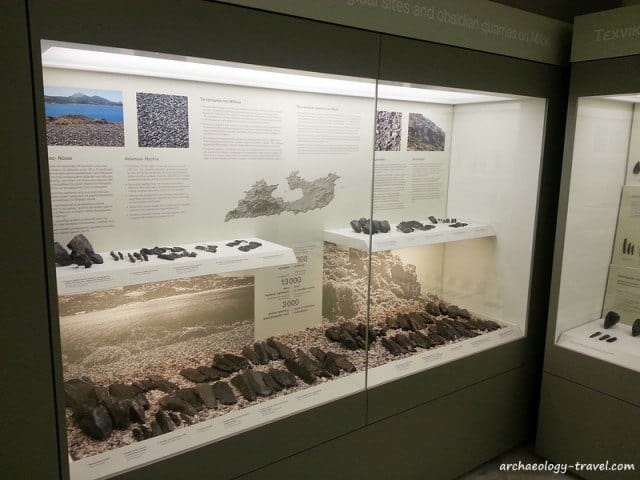 One of many displays about the ancient obsidian economy on Milos.

Besides some fascinating archaeology, based on the prehistoric use of obsidian, the volcanic nature of the island has resulted in some spectacular landscapes. Landscapes created out of eroded layers of volcanic ash, and flows of igneous rock including columnar basalt. To get to see the detail f this landscape it is obviously better to walk in it. But a rather leisurely way to experience the shear diversity and grandeur of this landscape, I thoroughly recommend a boat trip around the island. These are just some of the photographs from that day trip around the island of Milos. 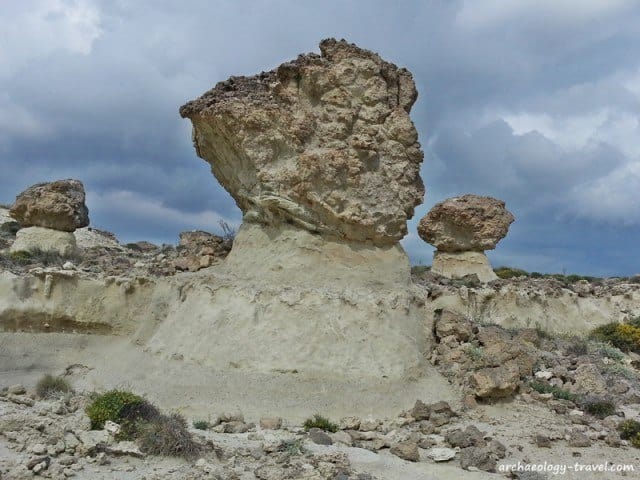 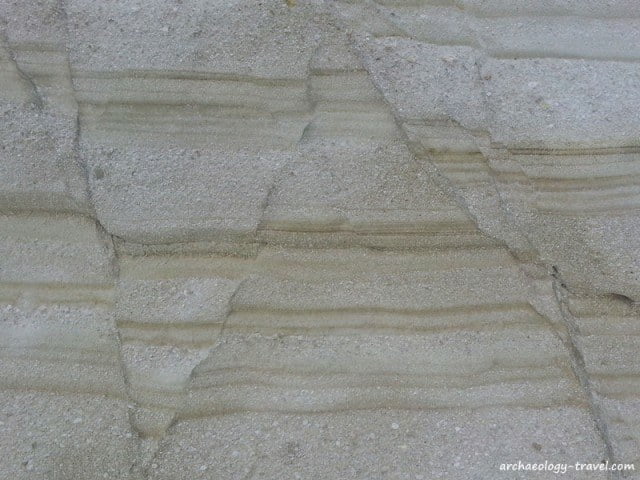 Micro detail in solidified volcanic ash: not only can you see different layers of ash but also how these layers have been fractured and displaces due to subsequent seismic activity. 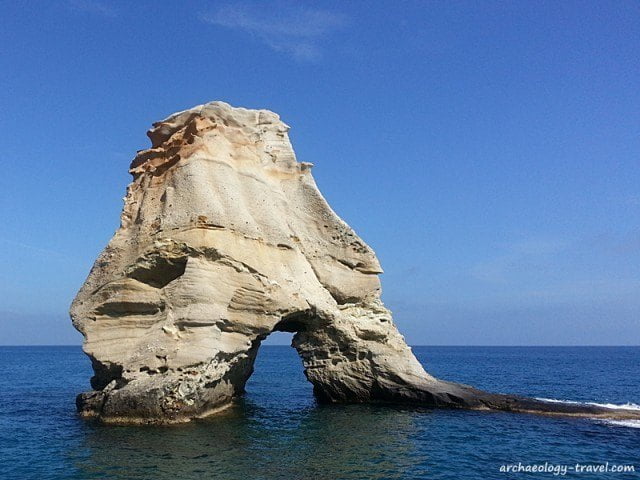 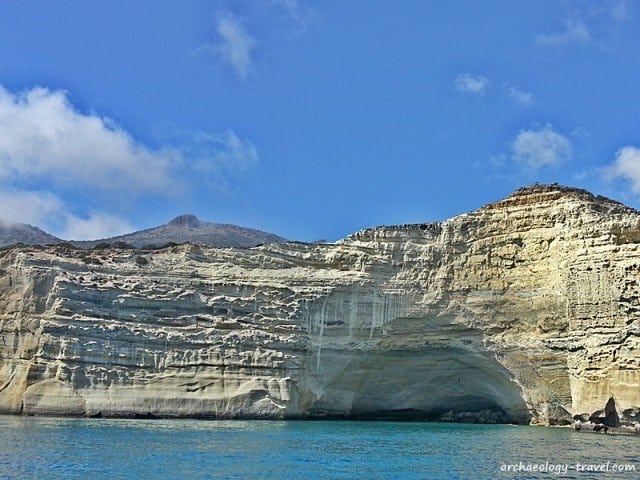 Given how easy the softer rock derived from volcanic ash is, a number of caves have formed as a result of natural erosion. The presence of caves was a bonus for pirates, and pirate mythology goes without saying. 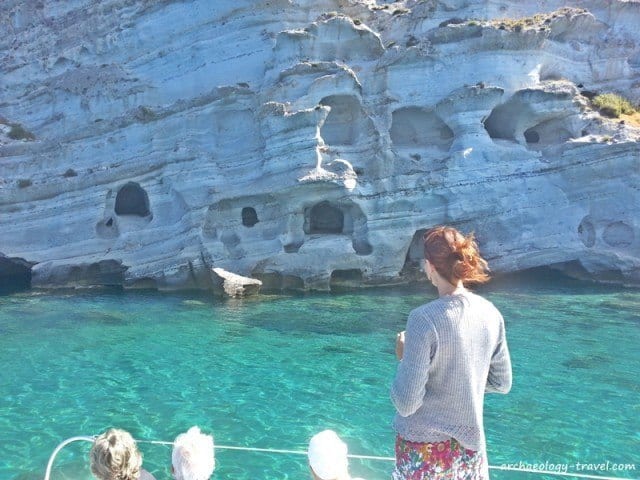 Before the pirates and their caves, the soft volcanic rock was used for early Christian catacombs; some of which can now only be reached by sea. 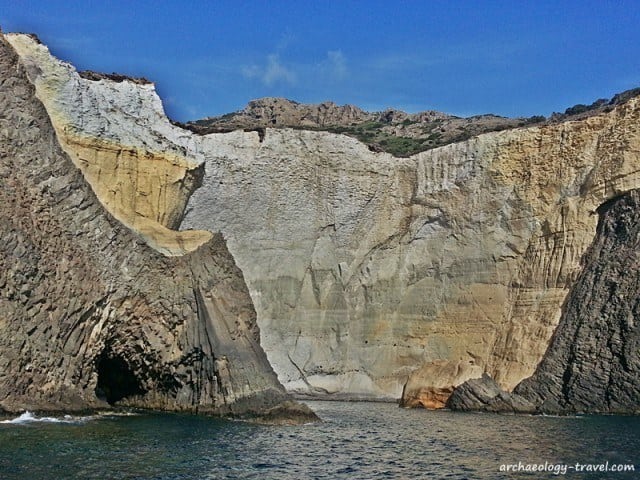 Basalt and pumice together. 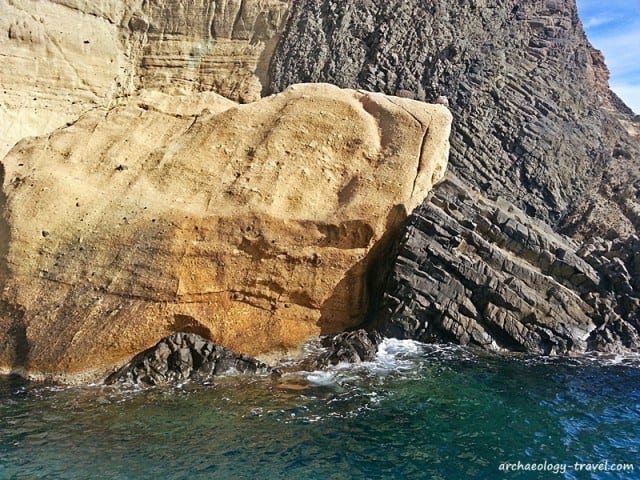 A closer view of the intersection between basalt rock and pumice, seen in the photograph above. 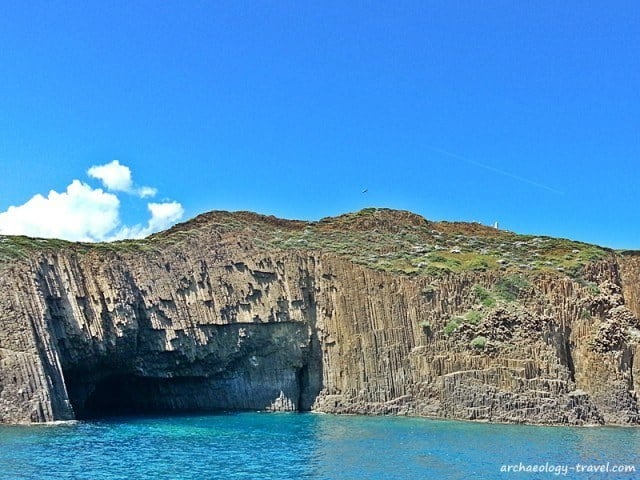 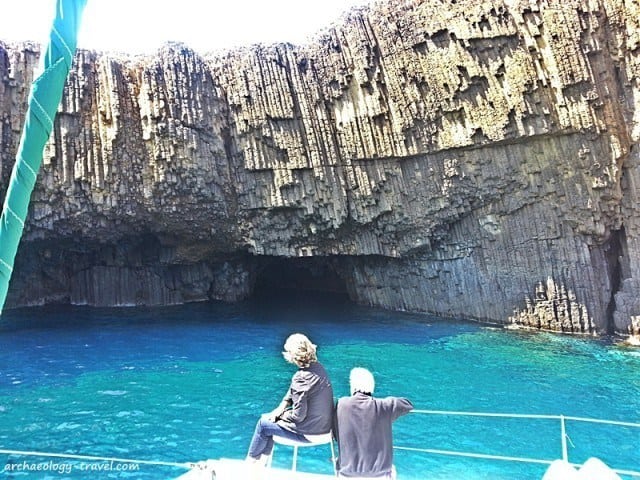 A cave in the columns of jointed basalt. 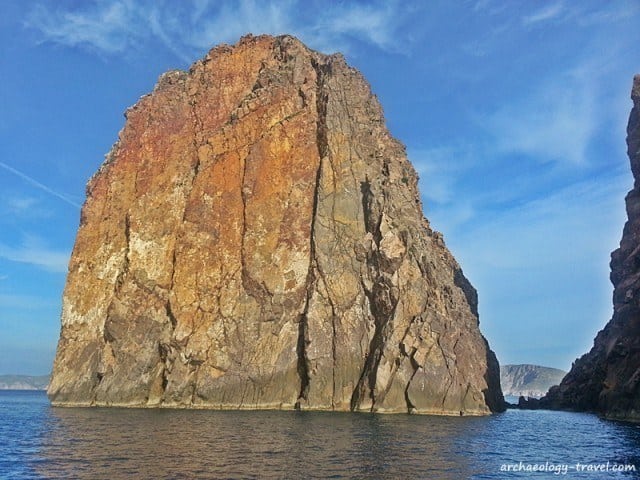 A huge rock of igneous rock of one kind or another. 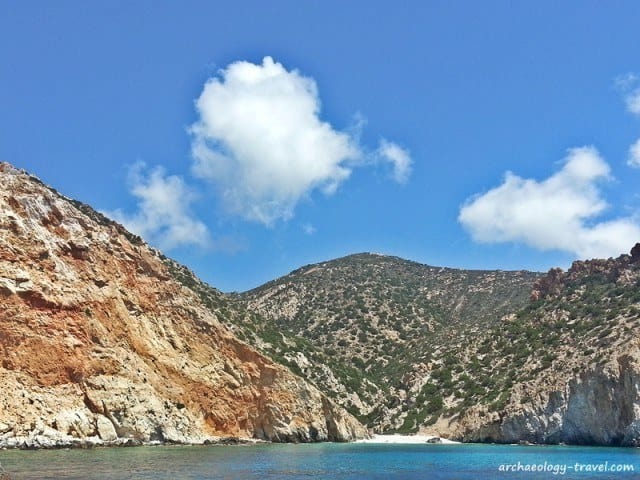 And of course there are some wonderful beaches. 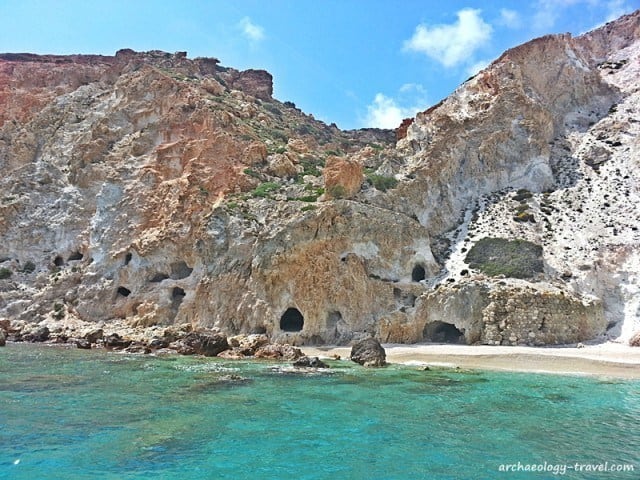 More pirate caves dug into the soft volcanic deposits around the coastline.

From the port of Adamas visitors can get a number of different boat trips, for a few hours, half a day or a whole day. To circumnavigate the entire coastline, you need to take one of the full day tours. I passed a delightful day on one of the Chrysovalandou Catamarans. The full day boat trip around Milos takes about 7 hours, and includes a stop at a idyllic beach for a swim, a fresh lunch prepared while moored in a idyllic cove, as well as other refreshments throughout the day. A day I will not forget! 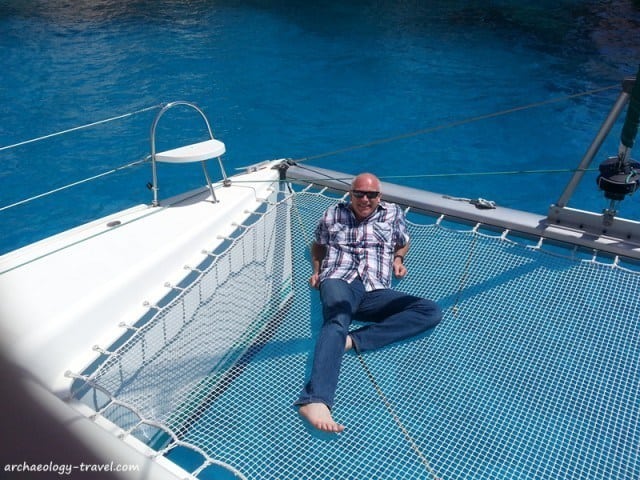 Sailing on a catamaran, definitely the way to explore the island of Milos!