My favourite archaeological destination has to be the Greek island of Crete. I first visited the island in 1990 while on a backpacking trip around Greece. Since then I have returned a number of times, although carrying a bit more luggage than a backpack and staying in some more comfortable places than a youth hostel. During each visit, however, I have been quite seduced by the archaeology, enough each time to make me want to return. 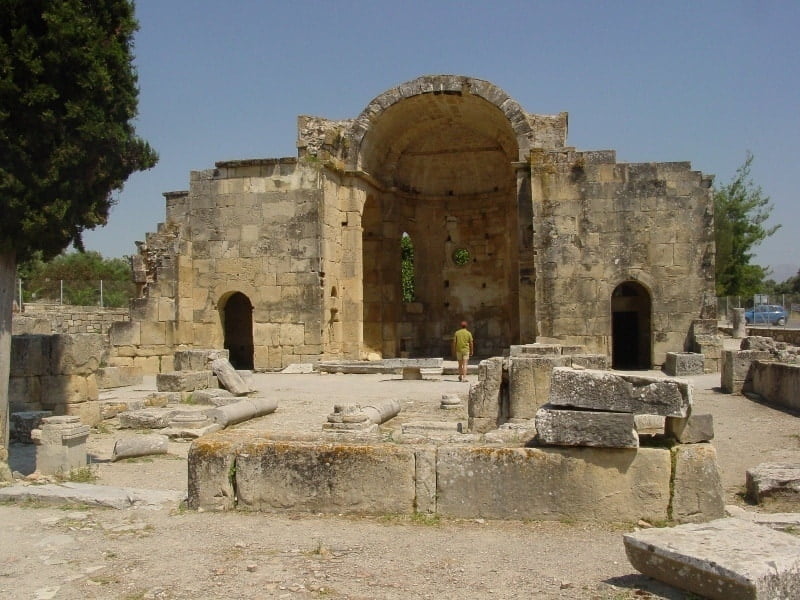 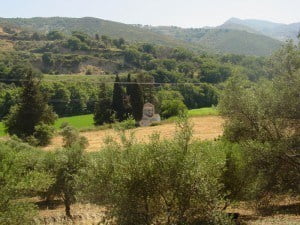 A Byzantine Church in an Olive Grove, Crete

Of course, back in 1990 I headed straight for Knossos, Phaistos and the museum in Heraklion. More recently I spent my holidays exploring the Byzantine history of Crete. It has been driving through the mountains searching for seemingly remote Byzantine churches and monasteries to see for myself the stunning frescoes that makes me want to return again and again. Nothing too Indiana-Jones you understand. I upgraded from the Youth hostel in Heraklion to self-catering villas in the Rethymnon area, hired a car and use reliable, locally produced and acquired guide books. I greatly enjoy planning a route, driving through the mountains seeing wonderful country side, tiny villages all far from the maddening crowd of Europe, yet probably at the very origins of Europe. … it is a nice idea.

Various romantic interpretations of Zeus’s abduction of Europa place the origins of Europe on the island of Crete, more specifically the town of Gortyn. According to ancient Cretan mythology Zeus, disguised as a white bull, abducted Europa from her homeland in modern day Lebanon and took her to Crete. The image of Europa and a bull features quite frequently in ancient Greek art. Together Zeus and Europa had three children, who became kings of the great Minoan Palaces in Crete, and the founders of the Minoan civilisation of Crete, and in turn of Europe itself.

The earliest signs of humans on Crete date to around 130 000 years ago, in the Palaeolithic period. Evidence for domestic animals and plants, characteristic of the Neolithic, exists from the 7th millennium BC. Knossos was first a Neolithic settlement, but it is the Bronze Age archaeology for which this site is so well known. The Bronze Age in Crete started in about 3500 BC, with what the archaeologist Arthur Evans termed the Minoan Civilisation. The Minoans were defeated by the Bronze Age Myceneans in about 1400 BC. After the downfall of the Myceneans Crete was ruled by various Ancient Greek societies until the Romans conquered the island in 69 BC and made Gortyn their capital. The Roman period is followed by the first Byzantine Era, which lasted from 297 until the 820s when the island was invaded by Muslims from Andalusia and became an Arab Emirate. It was not until 961 that Byzantium liberated the island, the beginning of what is termed the Second Byzantine Era. The Byzantine land rights to the island were then sold to the Venetians, and in 1212 Crete became a Venetian Colony.

No archaeologically inspired visit to Crete should ignore Knossos – no matter where you stand on the authenticity of Sir Arthur Evans’s reconstructions. If nothing else, the Bronze Age site has a significant place in the history of archaeology. 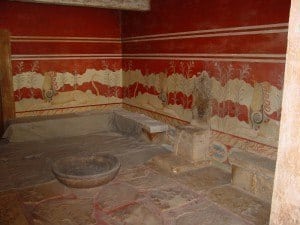 Evans’s “Throne” in the Knossos Palace

Although the site was initially discovered in 1878 by a local merchant with a passion for antiquity, it is a consequence of the work by Sir Arthur Evans that Knossos and the Minoan civilization has captured the public imagination in the way it has. A wealthy man, Evans bought the archaeological site and set about excavating it. Evans was convinced he had found the Palace of King Minos, and this conviction still influences what and how we think about the site today.

The term “palace” is itself misleading. The site was almost certainly not the grand stately home of some head of state, but rather a central storage point that was more probably a religious and administrative centre made up of numerous interlocking rooms some of which seem to have served as workrooms for the processing of food and wine. The amazing frescoes for which the site is so well known for are also highly contentious. There is very little archaeological evidence, for example, for the so-called “Griffin couchant” frescoes in the “throne” room.

Unfortunately, very little of what visitors to the site today see is original, and more importantly, many archaeologists believe that it is difficult if not impossible to distinguish archaeological remains from Evans’s rebuilding. This makes any attempt to undo Evans’s fantasy extremely difficult. 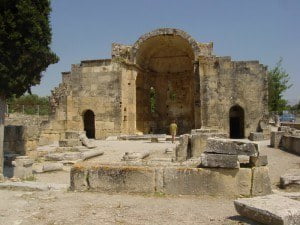 A more “original” archaeological site, if indeed such a thing exists, can be found at Gortyn on the south side of the island. There is evidence that points to a Neolithic occupation, but it is as the Roman and then Byzantine capital of Crete that the site is better known. In fact, it is the Gortyn Code for which this site has been the focus of so much attention, portions of which can be seen in the Louvre, Paris. The Gortyn Code, the oldest and most complete known example of a code of ancient Greek law, was inscribed on a wall that was later destroyed to build an Odeon during Emperor Trajan’s reign.

The most visible monument at the site are what is left of St Titus’s Cathedral. Built in the 6th Century, this is the most important Cathedral on Crete from the First Byzantine Era. It is a typical basilica, in that the rectangular interior is divided into three aisles with colonades, and a domed roof. A number of religious objects were found at the site and are now on display at the museum in Heraklion. 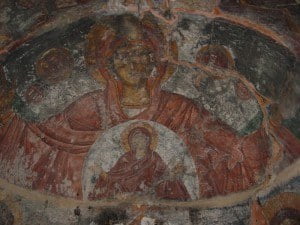 A 15th Century Painting of St Anne and the Virgin

I am not religious so I can only assume that it is my background in cave art, paintings on the rock faces of caves and rock shelters, that drew me to the Byzantine frescoes. I went to see one church with frescoes because it was near to where I was staying. After that I was hooked, and having seen how many churches and monasteries with frescoes there are in Crete I have thoroughly enjoyed searching them out.

Scattered about the island, in olive groves, on the sides of hills, in small villages and also in the larger towns are, it is said, over 800 churches and monasteries with Byzantine and post-Byzantine period frescoes, dating to between 1000 and 1600 AD. Some of these churches are active, some not; so due respect should be observed. Similarly, the architecture and the frescoes are in varying states of preservation, so due care and attention should be taken. Click here for more photographs of Byzantine wall paintings in Crete.

These churches and monasteries together with the extensive collection of icons and other religious objects in the Historical Museum of Crete in Heraklion will provide immense holiday pleasure for anyone with an interest in Byzantine art. Not only have I learned so much about a period of Europe’s history I once knew very little about, I have also experienced Crete in a way that I am sure very few others have had the time to. I have done the coach trip around Crete – I saw the main archaeological and historical sites. In searching for another hidden church I have also got lost, more than once – I saw Crete.