Southern Utah has some truly spectacular landscapes. Starting millions of years ago rivers cut deep through sandstone rock creating miles and miles of serpentine canyons. Today the area known as canyonlands is popular for hikers and backpackers who come not only to explore the geological beauty but also the rich and amazingly preserved archaeology, from dramatically situated cliff dwellings to vast panels of engraved and painted imagery. One of the more popular of these canyons is Grand Gulch, and one in which I enjoyed a week backpacking with friends. A tributary canyon at dawn.

When it comes to style of travel, archaeology travel has something for everyone. Whether it is a luxury weekend break in a city or a week backpacking in what appears to us a remote wilderness area, there are almost always fascinating traces of people who have been there before. Having visited the canyonlands of southern Utah on a number of different occasions, I am confident that if backpacking is how you like to experience the past this is an area that will not disappoint.

The canyons are the many tributaries of the San Juan River that flows east-west just north of the Utah/Arizona border and cut through the Colorado Plateau. One of the more substantial of these tributaries is the Grand Gulch, which flows south into the San Juan River. So formidable is this 51 mile long canyon, that it presented the first white travellers a considerable obstacle. Grand Gulch and its many tributaries are now a protected recreation area managed by the Bureau of Land Management. It is the most tortuous cañon in the whole Southwest … each bend means a cave or overhanging cliff. All of these with exposure to the sun had been occupied by either cliff houses or as burial places.

The Archaeology of Grand Gulch

Grand Gulch is known for its exceptionally well preserved rock art and mud and stone structures. While there is evidence of Archaic hunter-gatherers having settled in the canyons, it is the more substantial archaeology of Pueblo peoples (Anasazi) dating between 3,000 and 800 years ago that grabs visitor’s attention. These peoples grew their own crops (corn, beans and squash) but supplemented their diet with wild foods. Earlier in this time period they made and used baskets but soon started making clay pots. Earlier primitive pits dug into the ground developed into complex dwellings of stone, wood and mud under overhangs and high in the cliffs. Some of these structures are amazingly inaccessible, situated high on dangerous looking ledges.

Although you will still come across artefacts, and at times even human remains, in the deposits of some of these sites, many of the portable artefacts have long since been taken away. Mormons first started moving into the area early in the second half of the 1800s. They would do anything to make money, trapping animals and mining being popular pursuits. ‘Indian relics’ was another source of income, and many sites were destroyed through the looting of archaeological sites. Some people were more scrupulous than others.

In the early 1890s Richard Wetherill, from a prominent Colorado farming family, led a number of expeditions into the four corners area, including Grand Gulch. In one shelter he unearthed 28 skeletons. Fortunately, he took details notes and photographs of his work in the shelters and structures. His pioneering work is still held in high esteem. Basketmaker style paintings – the outlines and dots filling in the body appear to have been made with a finger tip. A human figure (about 80 cm high) with horizontal zigzags (about 7 metres in length) emanating from its head.

One of the more well known sites has a painting of what appears to be a mask created using green pigment, hence the name. Besides many interesting painted images on the on the wall of the shelter, I was quite taken by a relatively small (3 metres by 3 metres) and simple, semi-circular pit-like structure built up against the rock face. The semi-circular wall has a small niche in it, and once had a roof. Given that there was no door, it very well may have been a kiva – a ritual structure that was entered from above.

But the most intriguing thing about this structure was circular mud past on the shelter wall, two of which had spirals that had been created by someone’s finger. In places there are still traces of the fingerprint left behind as the finger was dragged through the wet clay. A sunken structure, perhaps a kiva, in the floor of the shelter. The circular mud pats have a diameter of about 25 centimetres.

If the semi-circular structure at the Green Mask site is possibly a kiva, there is no doubt that the structure in Perfect Kiva Ruin is one. It has all the typical features of a kiva, i.e. circular, subterranean with a hole in the roof that would have been use to enter and exit. These structures were used for religious rituals and had prominent places in the community. At Perfect Kiva it was in the centre of the large rock shelter. This ‘perfect kiva’ is entirely original not reconstructed – making the hike here all the more special. A well preserved mud and stone built structure towards the back of the shelter. The roof of the ‘perfect’ kiva, with the ladder coming up out of its entrance.

Where is Grand Gulch?

Grand Gulch is down in the south east corner of Utah. The designated is adjacent to the eastern arm of the the Glen Canyon National Recreational Area that follows the San Juan River. Kane Gulch Ranger Station is the principle station and the main trailhead, and it is located just south of the intersection of State Highways 95 (which runs from Blanding to Hite) and 261. There are other trailheads, and these can be reached from dirt roads of State Highways 95 and 261. Many of these roads are only accessible with a 4×4 or a vehicle that has high clearance. You are advised to equip yourself a detailed map, which has the various road accesses marked. These can be got at local BLM or National Forest Service offices or Visitor Centres in Monticello, Blanding, or Moab.

Apparently, during the summer months temperatures can exceed 38°C 100°F. Consequently, spring and autumn are considered the best time of year to visit. It was the last week of October when I visited, and the weather was very pleasant both during the day and the night. My friends and I backpacked through the canyons for seven nights, but we encountered a number of people who were only doing day hikes. Day hikes into the canyon are popular, and you can still see some incredible archaeology. Perfect Kiva Ruin, for example, is a 10 mile round trip from the Bullet Canyon Trailhead (just south of the ranger station at Kane Gulch along the 261).

Kane Gulch, with its trailhead parking facilities, is the most popular entry point, particularly for day hikes. The hiking in the upper reaches of Grand Gulch is relatively easy. Here the canyon has broad floors that make hiking quite easy. Although rock art and cliff structures are found throughout the canyons, the upper section has some of the better sites to visit, including Green Mask Shelter.

Permits are required for both overnight backpacking trips and day hikes. Day permits are available at the trailheads, but for overnight stays you need to register at the Kane Gulch Ranger Station. Vehicle camping is allowed at a few designated areas out of the canyon, and backpack camping is permitted in the canyon as long as you do not camp near archaeological sites. Open fires are not allowed in the canyon. It goes without saying no part of an archaeological site should be disturbed in anyway, not only do usual rules of Archaeological Site Etiquette apply, also while camping in this sensitive landscape visitors should strictly observe minimum impact practices.

Go and Enjoy! I know I did and would definitely consider visiting Grand Gulch again. 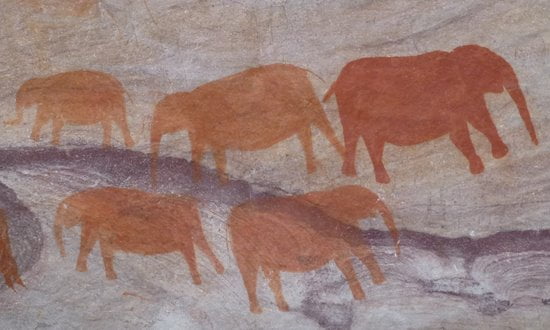 Visiting Rock Art Around the World

Rock Art, images painted and or engraved on to rock surfaces, can be found in caves and rock shelters, rocky outcrops and boulder fields throughout the world. See More Rock Art >>