Berlin is one of my favourite European cities, so much so that whenever I am there I wonder what it must be like to live there. The city has long fascinated me. As a child the idea of a wall (Mauer in German) dividing a city in two mesmerised me, but before I got to travel in Europe the Wall had already come down. As an academic archaeologist I researched what happened to the Benin Bronzes during World War 2, when museum collections were put away for safe-keeping – which did not stop some being taken by Russian troops. More recently I have greatly enjoyed exploring the city’s archaeology, and I share these discoveries here. 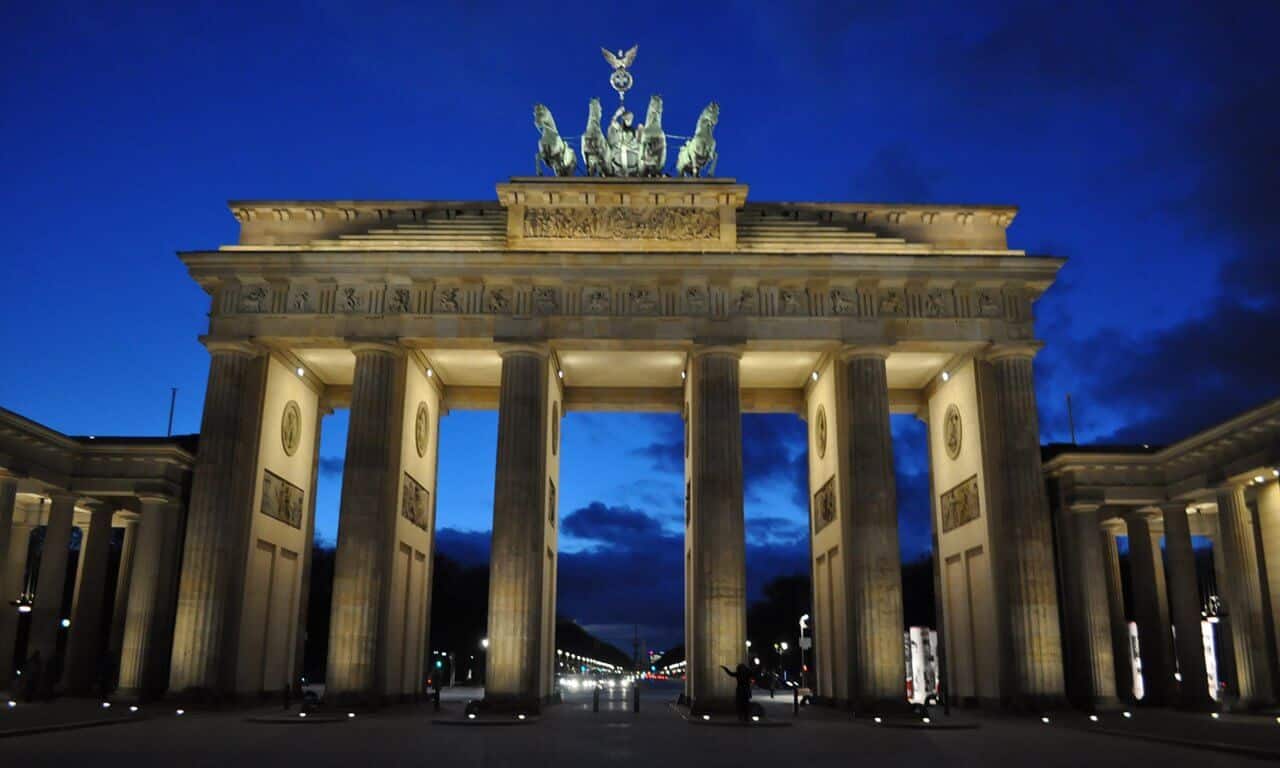 My favourite landmark in Berlin. Seemingly always crowded, except after dark and just before sunrise. Berlin is a popular tourist destination, but perhaps not one you might think of for its archaeology. Except of course the collections of artefacts and monuments from all over the World in the city’s museums. The Romans did not settle here so there are no remains of amphitheatres, temples or bathhouses that many other European cities have.

This did not stop the architects from the mid-eighteenth century on from creating their own neoclassical traditions. One of the more favoured spots in Berlin to have your photograph taken is in front of what must surely be the most well known example of neoclassical architecture, the Brandenburg Gate.

There are literally hundreds of museums in Berlin, perhaps not all that surprising given the extraordinary history of the area over the last thousand or so years, and the diverse culture that has developed there, because of and often times despite this history. For me, on this trip it was the archaeology museums on what is called MuseumInsel, or Museum Island – for these wonderful neoclassical buildings are on an island in the Spree River. The buildings themselves are rich in history and symbolism, and in 1999 MuseumInsel was added to the UNESCO list of World Heritage sites.

During previous visits to Berlin had not had the luxury of being able to really explore all four archaeology museums (the fifth museum on the island is an art gallery – and itself one not to miss!). With a three-day museum pass you to come and go at leisure, allowing you to get into the collections, rather than rushing from one gallery to another. The collections in these museums are astounding, and even controversial. The following are the various articles I have written on different aspects of the museums and their collections:

As most of the many museums in Berlin are not free entry, visiting just a handful can be costly, especially for visitors on a budget. Read my suggestions on which ticket/pass to buy. The advice is primarily about entry to the five museums on MuseumInsel, but it also applies to museums and public transport more broadly. A visit to one of the city’s chocolatiers.

As wonderful as the various museums on MuseumInsel are, my concentration starts to flag after a few hours. And there really is nothing worse than wondering aimlessly from one glass cabinet to another. This is the time to venture out into the city.

Although I am all for just getting out there and exploring a city, both with and without a guidebook, I am also a great fan of organised walking tours and excursions. Occasionally it is great to be able to be able to relax for a few hours while being shown around by a knowledgeable local. Obviously an engaging and informative guide can make or break the experience. While in Berlin I signed up for a half day walking tour of the city and went on a bus tour of Potsdam. There are also Walking Tours of Potsdam on offer.

Potsdam and its extravagant royal palaces and gardens are well known and often compared to Versailles; with good reason. For Frederick the Great, Sansouci Park was a neoclassical playground. Seemingly scattered throughout the vast park are some incredible replicas of antique architectural features, a Roman bathhouse, a temple. And there are other influences as well, including Chinese House and a replica Mosque. A truly spectacular place to visit, but not in winter … read more about my day trip to Potsdam and Sansouci. Memorial to the Murdered Jews of Europe.

When I booked the walking tour, it did not register with me that 27 January is International Holocaust Remembrance Day. It was a cold day, the snow was still lying on the ground, and somehow the weather seemed appropriate to be taking in the various sites from the Reichstag to Checkpoint Charlie, including the Memorial to the Murdered Jews of Europe and the parking lot that now covers the infamous bunker.

For anyone with a deeper interest in Third Reich history, the rise of Nazism and Berlin, there are more details tours on offer than the one I went one. These are two that I considered:

As luck would have it, for me, the guide was a postgraduate archaeology student. So besides the points of interest associated with the Wall, I learned a great deal about archaeological contributions to the history of the city, including the excavations that revealed the torture chambers at what was the Gestapo headquarters – today the Topography of Terror memorial. I shall write more about this adventure in a few days.

Dinner in the Dark at Nocti Vagus I bumped into Colleen Williams at Nocti Vagus.

Words can lose their impact when used often … but I can honestly say dinner at Nocti Vagus is definitely one of the most incredible experiences I have ever had.

I have eaten more amazing meals in my life, certainly I have been in some spectacular settings, but I have never been in total darkness, let alone eaten a wonderful meal without being able to see the food on the plate or even in front of my face. And yes, I do mean absolute blackout and not seeing anything!

The evening is advertised as ‘dinner and show in the dark’. That would intrigue anyone with even the slightest sense of adventure, no? Well it intrigued me. When I arrived at the restaurant, people were seated at tables enjoying drinks and aperitifs, the lights were up and the atmosphere very pleasant. Before the evening was explained to me, I thought the lights would be turned off for the meal. And that would not have been that dark, there would have been a lot of lighting from the street.

No, once you have chosen your meal and drinks from the menu you are lead downstairs into a basement room for the meal and entertainment. After going through a series of rooms, allowing you to acclimatise, you are introduced to your waiter and led into the dining room to your table. I have never experienced darkness like it! This is the closest you will ever come to experiencing what it must be like to be blind.

I am purposefully not going into too much detail, I avoided reading online reviews before I went, but this is something everyone should try, at least once. After hours in the museums starring into glass cases, the absolute darkness is actually a relief, your hear more … and more importantly, you taste more.

After the meal in the bar upstairs, I bumped in to fellow travel blogger Colleen Williams (whose partner took the photograph above) – also known as the Ad Lib Traveller. Meeting people in the real World that you have only had online contact with really is a wonderful way to end an ‘amazing’ evening.